The Passenger: Bertrand Tavernier on "My Journey Through French Cinema"

For the past few decades, filmmaker and critic Bertrand Tavernier has battling the idea that French cinema was a wasteland, with exceptions like Robert Bresson, Jacques Tati and Max Ophüls, between World War II and the French New Wave. This subject is glancingly addressed in his new documentary, “My Journey Through French Cinema,” but it’s all over the interview I conducted with him, particularly when I brought up the Nouvelle Vague. “My Journey Through French Cinema” starts off with a very thorough analysis of Jacques Becker—a filmmaker remembered in the U.S., if at all, for his prison break saga “Le Trou”—and goes on to discuss directors with whom Tavernier worked, such as Jean-Pierre Melville and Claude Sautet. Melville is frequently celebrated in the U.S. these days, but mostly for his gangster films; Tavernier approaches him from another angle, trying to get past the image of men with fedoras, trenchcoats and guns. Taking a very personal angle, “My Journey Through French Cinema” is even kinder towards Jean-Luc Godard than Tavernier’s final words here might lead one to expect.

You refer to the Cahiers du Cinema vs. Positif feud a few times in your film. But Cahiers is probably the source of Claude Sautet’s reputation as a mindlessly optimistic director. Do you think there’s anything positive for film culture about such feuds, or the Andrew Sarris vs. Pauline Kael feud in the U.S.?

This is a tough question. For me, it belongs to the past. It’s dated and old-fashioned. Both magazines were wrong and right. The Cahiers were totally wrong when they were attacking Ford and Huston. Positif was wrong when they attacked Hitchcock and Rossellini. Positif was right to fight for Buñuel, Borzage, Huston and some Italian directors ignored by Cahiers. Cahiers was right to fight for Hitchcock and Rossellini. Films and directors are more important than critics. In the fight between Sarris and Kael, I would be more on the side of Sarris, but it seems so dated, like the fight between Protestants and Catholics. I made a film about that and I discovered how it hurt so many people. People were writing B.S. on both sides.

Let’s come back to the films. What is important is whether the film survives those fights. In many cases, it does. The polemics are not the subject of my film. My admiration is the subject. They gave me so much. They allowed me to stay alive, to have hope when I was sick or depressed. Those directors in the film themselves, sometimes fighting against censorship or the producers—if I’m able to make a film now, it’s because of their fight. That’s much more important than the fights between critics. It’s more important that Autant-Lara and Clouzot fought to get final cut of their film and make sure that the producer was not the auteur of their films. In the case of Gremillion, it might have cost him his career because he fought so much for the director’s freedom that producers become suspicious of him and he couldn’t find financing for the film he wanted to do, which was about the Commune of Paris. He could never find money because he had been at war with the money-people. Critics risk nothing. In this kind of fight, a director risks his career!

How hard was it to decide how much autobiography to include in your film?

Difficult. Normally, I don’t like to speak about myself. Half of the things I could’ve said were cut, especially about the part played by my father during the war, how sick I was when I was young. But I tried to include some of those scenes and explain how I discovered some films in crazy situations, like when I had only one day in Paris or when I had no money and went to cheap cinemas showing old films. I discovered treasures like that, although sometimes with bad projection and dirty seats. It was so exciting! I wanted to share that with the audience.

Parts of the film, like the section on Jacques Becker seem completely auteurist, but other parts discuss acting and the use of music. Do you consider yourself an auteurist, and if so, what does it mean to you?

I don’t know. I never understood the meaning of the world. If by “auteurist,” you mean that the director is the author of a film, I agree. If it means that you have to forget the importance of screenwriters, D.P.s, composers, I’m not an auteurist. On Becker, he was a really imposing figure, but I quote two of his screenwriters. There are several films that he wrote himself. Even when he was working with Maurice Auberge, he was controlling every line. Jose Giovanni, who co-wrote “Le Trou” which is based on his own experience, told me working with Becker was exhausting. He asked so many questions and wanted to see if any twist in the story really worked and expressed so many doubts. There was a moment in the script where he thought it was impossible for the prisoners to dig a tunnel. Giovanni said “You are proving to me that it’s impossible, but I did it. I was in that jail. Maybe you are raising too many questions?” Even though the escape failed, they saw the lights of the street. Becker had an obsession with controlling every aspect of his films. He controlled the music and asked the composer in “Montparnasse 19” to use only four notes and not find other harmonies. He was always very polite and charming, but for me, he’s one of the true auteurs. With one exception, which is "Ali Baba," his subjects were always interesting, which is not the case for Clouzot, Carné or Renoir. All his films are worthwhile. For me, he’s one of the two or three greatest French directors.

How do you think your perspective would’ve been different if you hadn’t started working for directors like Melville?

I don’t know. My perspective changes continually, because I was learning, learning, learning. What I learned from Sautet and Melville comforted me in my admiration for Renoir or Prevert or Becker. But I never experienced anything which made me completely change my point of view. Everything I went through made me expand my vision, gave me things I could rely on. I was learning, and it’s something I went on doing even when I started directing. All the films I’ve made were done because I wanted to learn. I mostly took up subjects I knew nothing about: the first World War, the police, the schools, the adoption in Cambodia. And I learned millions of things making those films. I became a bit more educated and civilized. 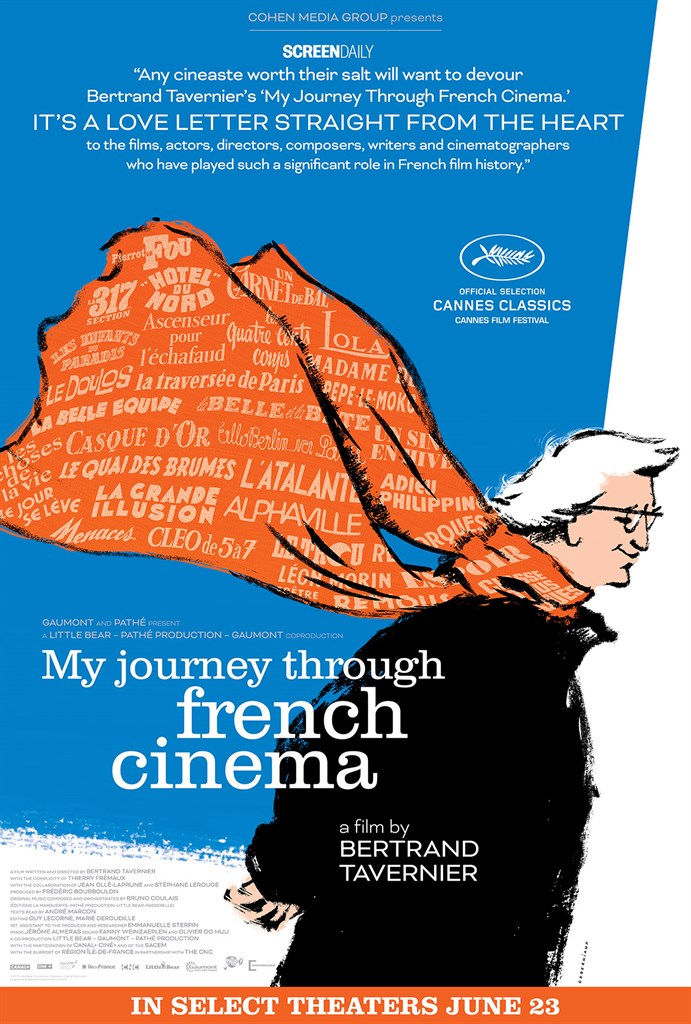 Fandor: The French New Wave wasn’t just a movement of filmmakers. It was also a revolution in taste. Can you imagine a group of filmmakers outside the U.S. having such an influence on American cinema now?

Every movement, when they are doing great films, are revolutionaries. Renoir and Duvivier, in the ‘30s, were revolutionaries. Bresson was incredibly revolutionary. The New Wave, in a way, was revolutionary because it brought the cinema of the first person, but the British had done that first: Karel Reisz, Lindsay Anderson. Michael Powell was a revolution in himself. They brought things, but there were also subjects they never dealt with, contrary to the directors before then. They were not interested in history, period films or the politics of the time. They were not interested by everything about women. The only films dealing with abortion from that period were made by Claude Autant-Lara. They were doing a certain kind of film but they were forgetting things that were dealt with before them. In the mid ‘50s, the French cinema was stiff, heavily written and studio bound. But even Rene Clement was shooting in the streets of London four years before the New Wave with “Monsieur Ripois” and had done that in 1944 with “La Bataille du Rail.” It’s very difficult to say those people were the first, but at least they opened windows. At the same time, the working-class do not exist in their films. They did exist in Becker and Duvivier films. The Paris of the poor isn’t present. The settings in the New Wave films are very chic, except maybe Agnes Varda and Alain Resnais, who were in the movement but not really New Wave. The things they lost were brought back by the generation after the New Wave, who took everything that was good about it—freedom with the camera, live sound, shooting on location—and brought back shooting in the provinces, like Marcel Pagnol was doing in the ‘30s.

When I referred to the New Wave as “revolutionary,” I was thinking more about their taste than their films’ content. But Godard quickly turned to the left.

They weren’t the first French cinephile directors. Renoir loved King Vidor. They were just great self-promoters, because they had been journalists, and they convinced Americans they were left-wing, despite writing for right-wing publications. Godard wasn’t a leftist, he was a toady to the worst tyrant in the 20th century.