It was not long after its release in 1996 that Danny Boyle's filthy drug comedy “Trainspotting” became a brand, given the worldwide audience that took to its gross-out humor and shocking drama, its iconic soundtrack, and the dorm-room-ready tagline of “Choose Life.” But 21 years later, "Trainspotting" now becomes a franchise, with a sequel that imagines heroin users in their middle-age, now embracing the pure energy in what it means to be alive.

More than the expectation for drug-fueled shenanigans, Scottish humor or Iggy Pop’s “Lust for Life,” both films are motivated by the vision of director Danny Boyle, who has an extensive filmography ("28 Days Later," "127 Hours," last year's "Steve Jobs") won an Oscar (“Slumdog Millionaire”) but hasn't yet done a sequel. His authorship as an energetic and optimistic hard-worker shines in this story that redefines what “Trainspotting” is all about. Now, the tale of lost soul Spud (Ewen Bremner), best friends and enemies Renton (Ewan McGregor) and Sick Boy (Jonny Lee Miller) and convict Begbie (Robert Carlyle) is less about screwing around than it is finding some type of purpose, leading to a hilarious, emotional coming-of-middle-age story that does to the "Trainspotting" brand what "The Lego Movie" did to Legos.

RogerEbert.com spoke with Boyle about the new film, the importance of optimism within all of his movies, his interest in making cinema that’s the equivalent of a train coming at the audience and much more.

First off, I noticed that one of your characters [in "T2 Trainspotting"] has a Google phone, which was surprising given that you just made a movie about Steve Jobs.

[Laughs] Oh no, God, they disowned us after making that. I used to get invitations to all their things, and that stopped. We didn't get any free stuff. They didn't want the film to happen, and I think they were quite pleased that it wasn't a big commercial success.

That's especially bizarre to me, as that movie ends with Steve Jobs having that very positive moment of acceptance at the end. And "T2" has that same idea, it has that pure optimism. It's in a lot of your movies.

Where does that come from?

I think of it as kind of, I think of them as journeys. By that, the two-hour or 90-minute experience, and I kind of want you to lift like that at the end of them, and feel that healing is possible, or hope is possible. But that's just my personal, I'm an optimist about everything except success, but I am an optimist, you know?

Do you know where you could trace that optimism back to?

My mother. It was religious with her, it's not with me. But it's the same outcome.

Even on a film set, do you find it difficult to be an optimist?

No, it's crucial. The way I like [film sets] to work, yeah. I don't have much time for the deadbeats or downhearted. I mean, I make a film about them and convert them, overcome the obstacles that are necessary. But it's very important to me, that they are eventually filled with some kind of atonement, or hope, or there's a move towards the positive at the end. And I think it allows you, it sort of ... it's not a recipe, it's just the way they emerge. It allows you to be as dark as you want to look a whatever you want during the film. But there is this understanding, and the writers that I work with also have it, that we move towards that by the end of the film. 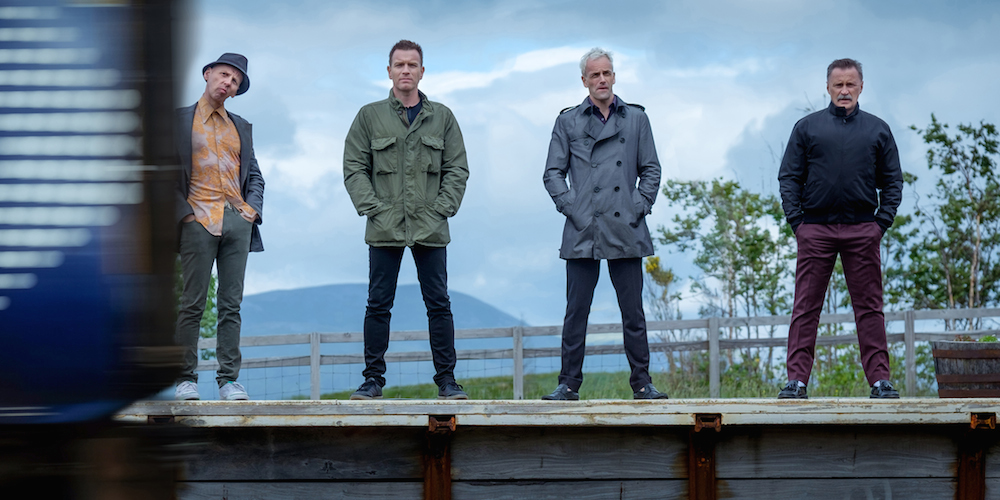 You're converting them to optimism especially with this story. And "T2" feels like it completes the "Trainspotting" tale.

It's one of the great puzzles isn't it, because if you open it up it's such a huge movie with such a mantra, the sardonic "Choose Life" of it. If you're going to open that up again, you've got a big problem. Because if you're going to open it up again, you can't do it exactly the same. Because even if you recast them as younger people, it would always leave a bad taste in their mouths, and you've got to deal with them honestly. The one thing that defines them is that they're quite honest, even about betraying each other [laughs]. And so you have to deal with them honestly about middle-age, which is what they are, of course. You can't just add 20 years and say it's five.

It's always been about what this movie is about. The sober reality.

Spud gives up and he finds a voice, the most hopeless and hapless of all the characters. But actually, he finds a purpose, and that's what you've got to do. The truth is, as far as I understand it, and this is true for all of them really and this was true of our research, you've got to replace it with something else. You can't just hold to just be clean, it's not the case of that anymore. The power of that world is so strong and it's so connected to us as humans that your only hope is to replace it with something else. So the guys who advised us on the first film replaced it with sport, and they were featured as football players in the Loyalist's Club, and when we finished it and while we were editing, they sent me a photograph of all of them at Everest base camp. So they'd given themselves a mission, and they'd gone to Everest base camp. But you can sense straight away that what they're doing is replacing it with constant possible fulfillment. The new group that helped on this film, it was drama and all these drama workshops and improvisation and they made these web series, they kind of do it like that. And Spud replaces his chasm with this voice he finds, and this fulfillment he has in articulating it, which is wonderful. Maybe a little naive, but I believe it. It's how Irvine Welsh began.

I'm curious about you as a person when you were making “Trainspotting"; how you would describe yourself as a character back then, as compared to now.

Well … it's hard to do. It's really more, you see photographs, and we saw some photographs of the time, because there were a few of them circulating on set, and you barely recognize yourself. But, irrepressible, and I kind of retain that but I'm more self conscious about it. I think you have to be really, you may not have my positive nature, you may be more melancholic, but you need to be irrepressible, otherwise it won't happen because there's so many things that stand in the way, just stupid stuff and you need to overcome it. It leads to monsters, who overcome it by crushing it. Or I'm more like the cunning one, who tries to do it through good will, and evangelizing the product, or the project. 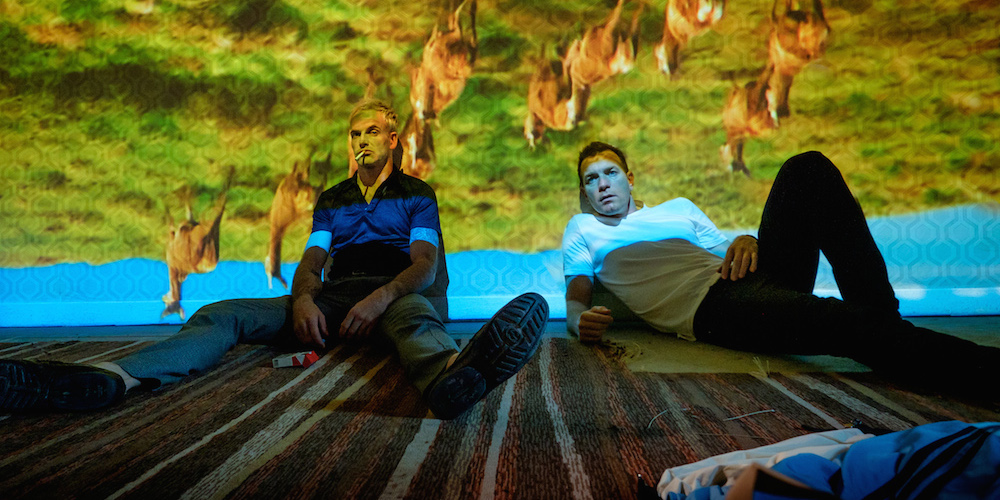 As someone who has now made a sequel, what is that like? Is it automatic for you, or for the actors?

[Laughs] It seemed it for the actors. I was surprised at that. It was partly because we kept the same costume designer, who was a huge help. Because it's a slightly private process that you don't hear much about, which is the way that costume designers work. Because they're often in fittings alone with actors, and that's the actor's private time where they reveal, "Oh, I don't like this, I can't do anything in these shoes," that kind of stuff. And I was surprised how automatic it was with them, they seemed to just step back into it like no problem. And not an impersonation of the guy previously. They matrixed in 20 years and it felt automatic for them.

For me, it wasn't. I was more conscious of trying to work out the relationship with the first film.

Mmm, yeah, the film's relationship, my own relationship. The successful ones tend to drift away from you, over time.

Yeah, because the people champion them so much. The unsuccessful ones you tend to be more possessive of, and nurturing, because nobody ever has. So you kind of look after them a bit. So I was trying to work out how the films would speak to each other, if indeed they should. We initially called it something different, we refused to call it "T2" or "Trainspotting" anything to do with the original. We called it "The Least Unfamiliar." And that was because we wanted it to have its own genesis, really. And not just be assumed automatically that this is a sequel. Because it sets in train a series of behaviors by all the support team and everybody at the studio. It's the sequel. So they start working on posters before you've even made the film! And you go, "No," and I knew eventually in my mind we would have "Trainspotting" in the title somewhere. It's sort of inevitable.

It is a brand. But I let that arrive late.

Do you think of these characters when you're off making other films?

No, no, you don't. In fact, you try not to. Even if they pop into your head, because you're trying and failing, not to repeat yourself. That's what you're doing with each one. That's different, because obviously the question is, for the sequel, it has to be the same, but different. And it is the same, the same four actors, but you want it to be different. They try to behave like they did in the past for some of the fun of the movie, but actually they can't, really. They talk. Whereas in the first movie, nobody says anything. There's a voiceover, but literally nothing is said, there's nothing to say in the first film, or very little. There's a series, almost like epigrams, and that's it. But this one is actually like, they've got to slug it out with people whom they are obliged to, dependent on, fearful of. They've got to slug it out.

I'm fascinated by the energy in your films, and especially this one where it gets such a pure adrenaline from cinematography and editing. Where does that energy come from? How much of it is inspired by other films?

It's partly film. Film, for me, has always been about forward momentum, just in the nature of the art form. They're not a solitary, reflective experience, I don't find them. That's not to say that you can't reflect on them later, but the nature of consuming them is not solitary and it's not reflective. It's actually visceral, and it's in company, and I've always found that extraordinary about the art form. It's how it began, and obviously, like any art form, it tends to be born from or kidnapped by the upper middle classes, who try to turn it into art movies. But actually you look at the origins of it, the origins are working people. At the end of the week, they go to a big room, and they fucking shout their head off at a train coming towards them. And that's the origin of the cinema. It's not a private diary, and that's my own personal philosophy. And that leads to the energy.

Now, having said that, I love big, big movies that deliver the equivalent of the train coming toward the audience, but I'm not very good at making them. I'd much prefer to make something like this. And try to make it as compelling as possible, for as little as possible.