If you long for the gritty charms of mid-‘90s indie cinema in general and “Trainspotting” specifically, “T2 Trainspotting” gives you exactly that. And by “exactly,” we really do mean “exactly.”

Danny Boyle’s sequel to his generation-defining 1996 film offers more of the same, for better and for worse. An opportunity to wallow in grimy nostalgia seems to be its sole purpose. It is an absolute rehash, complete with visual cues, bits of dialogue, blasts of music and even snippets of clips from the original 1996 film woven into the modern-day action.

“What’s the point?” you might wonder. “Why now?” And you might still wonder that after spending two more hours with Renton, Sick Boy and the rest of Edinburgh lads, who are now 20 years older and not much wiser. Boyle can make any kind of film in the world that he wants—and he has with “28 Days Later,” “Slumdog Millionaire,” “127 Hours” and “Steve Jobs.” This is a director who has made his name by taking risks. By revisiting “Trainspotting,” Boyle is playing it strangely safe. His signature visual verve is there; it’s the narrative drive that’s missing.

He’s been living a respectable life since making off with the 16,000 pounds he stole from his buddies after their big heroin deal at the end of the first film. The blurry, sun-dappled sight of a scrawny, young Renton walking across a bridge with a duffel bag full of money in his hand and a smile on his face is one of the many key images Boyle reinvigorates here. Working with his frequent cinematographer, Anthony Dod Mantle, and editor, Jon Harris, he also recreates the tricky combination of shocking visuals and playful pacing that made “Trainspotting” such an original, thrilling breath of dirty air.

The other characters haven’t changed much, either. Renton has beefed up and cleaned up, reinventing himself in another country and keeping far away from the drug that had such a complete and hypnotic hold on him and his friends. But Jonny Lee Miller’s towheaded, troublemaking Sick Boy now runs the family pub, which is more rundown than ever and not nearly as popular as it used to be. The sweet and simple Spud (Ewen Bremner) remains hooked on smack, and is so depressed and destitute that he’s in the process of trying to kill himself when Renton stops by to say hello. And Begbie (Robert Carlyle) is as volatile and violent as ever, having spent time in prison and now trying to reconnect with the son he barely knows by dragging him into a life of crime. Of all his friends, Begbie is the most dangerously angry about Renton’s long-ago betrayal.

Basically, “T2” consists of Renton bouncing around between these supporting characters, as well as Sick Boy’s Bulgarian girlfriend, Veronika (Anjela Nedyalkova), the proverbial hooker with a heart of gold who has dreams of helping Sick Boy turn the pub into a brothel. She essentially exists so that when Renton does a cringe-inducing, contemporary version of his “Choose Life” monologue from the start of the original “Trainspotting,” he has someone to listen to him this time. The scene is a prime example of how “T2” manages to establish a familiar, rhythmic patter, yet still feel lazy.

The pacing overall is erratic, though, which is not the sort of comment one usually would make about a Boyle film. “T2” certainly has its moments and some callbacks that’ll make you smile—the sight of McGregor in a filthy men’s bathroom, for example, or the iconic drum beat at the start of Iggy Pop’s “Lust for Life.” And McGregor and Miller share a warm, spry chemistry, despite (or perhaps because of) the bitter friction that now defines their characters’ relationship. Meanwhile, an all-too brief appearance by Kelly Macdonald comes out of nowhere and feels like a missed opportunity. The former underage party girl has become an uptight corporate lawyer, which seems like a rather facile condemnation of society as a whole.

But the movie never really finds a cultural groove or a political voice. The sight of Renton standing awkwardly in his childhood bedroom, still covered with train wallpaper and seemingly untouched in 20 years, feels emblematic of the entire endeavor. Just because you can go home again doesn’t necessarily mean you should. 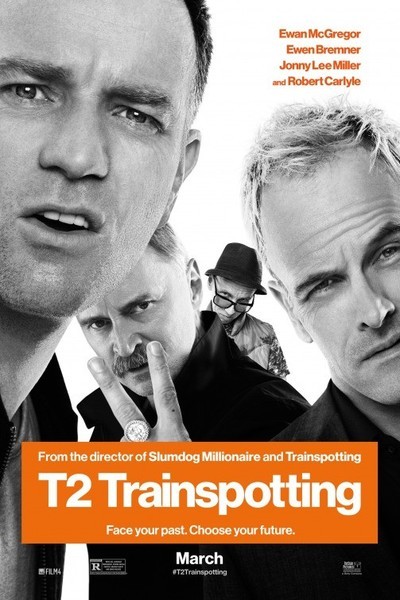