Feel It All: Drake Doremus on "Equals"

The latest from "Like Crazy" and "Breathe In" director Drake Doremus continues to explore the intensity of love and connection, but on a world scale: a futuristic utopia where emotions do not exist, and society is supposedly the better for it. The story focuses on a man named Silas (Nicholas Hoult) whose feelings begin to sprout when he starts to truly notice a woman named Nia (Kristen Stewart). He shares his "sickness" with her, and the two become societal rebels. With feelings seen as a disease to be repressed and eventually "cured," they fight for their burgeoning love with the help of others (characters played by Guy Pearce and Jacki Weaver).

Doremus spoke to RogerEbert.com about "Equals," how Stewart always brings 110%, his interest in making films that are like visual tattoos, and more.

Nathan Parker wrote the script, but you are credited with the story. What was the first seed or thought that gave birth to this movie?

Well, two thoughts. It was the beginning of thinking about the last couple movies, and what to do next and trying to do something sort of out of the box that was scary and different, and thinking about the future really. And the way that technology is sort of pushing us away from each other,but also closer to each other, and how interesting that is. And I was thinking about what if we evolve into a society that is extremely focused on progress of the human race and not hate and love and all those things that are tied together with hate and love and beings that are emotional, volatile beings. Essentially, it started as a love story that takes place in a world where love doesn’t exist, or need to exist, but asks the question of do we organically always come back to the same place, and come back to what makes us human beings?

Do you feel with social media and technology that we are more connected or less connected?

I don’t know, I kind of missed that whole thing in my life. It’s interesting, I am very interested in exploring it more, but from what I understand, I do find it odd and serious, because it is so immediate. It feels inorganic in a way, this idea of chemicals and pheromones and all these different things, but [people] exist when you meet them in in any point in your life ... it's about how pure that is, and how the opposite the other thing is.

Your previous films have that idea as well, about these wavering connections between people, and this natural connection. What do you find fulfilling about exploring that?

Well, I think it’s just something that’s endless. Long term relationships and different themes and metaphors in this film are really interesting to me, and it’s just constantly having love, losing love, taking care of it, maintaining it, it fading, it is just so fascinating with the life and people you meet, who come in and out of your life.

What were some films that made you think "Equals" was possible, or inspired you?

I think Truffaut’s “Fahrenheit 451” and the character of Montag had some very stylistic ways about him. I’d say “Blade Runner” as well, and the idea of that film is that it’s an emotional experience, a tone poem in a way that washes over you. I’m not a big sci-fi guy, and not bossed with the genre, so for me it was interesting to turn it on its head a little bit, and try to make something different and something that’s really warm.

When you were designing this sci-fi movie, were you making vision boards or using story boards?

I don’t board anything. My DP and I just know where to go. We shot ideas for how we wanted to shoot and what’s important in a scene. We kind of let the moment guide us, we’re constantly improvising, the actors are and we are as well, and we’re kind of just finding the story and letting it evolve and that’s the process, And sometimes they’ll get frustrated with me because I’ll throw the camera out and just start walking around, and set up another shot and I’ll do something I like.

How does Kristen Stewart collaborate?

She’s amazing, it’s great working with her because she’s so passionate and intense, and you get all of her. You don’t get part of her, or 50%, you really get 110% of her every moment and every day and sometimes it’s a lot. And nobody is harder on her than she is, so a lot of it is trying to get her to let go and jump in and not worry about what she’s doing because she’s so natural and so beautiful, and this was something that she hadn’t really done before. She’s a good person in every way. She cares about the right thing.

Which is invaluable for a director.

It’s the best, I can’t make these movies without actors like that.

With this and your previous movies, was casting something that you were thinking about when you were writing?

I think it’s 80% of directing, it’s so much. At the end of the day, you can’t change somebody. You guide them and direct them, but essentially you’re hiring the soul that is going to be what it is. Nick and Kristen brought so much of who they are into the character,  and put so much of themselves into the film and brought so much out of each other. To me, getting that in the first time we ran through it and realizing, okay, that is right, that’s such a good part of the process.

Was there any Kristen Stewart movie that had made you feel like she could play the character, and that she was the right person?

I had seen “Into the Wild” when it came out in theaters, and was super curious. You know you get that feeling when you watch movies and be like, one day you have this knowledge or predestined theory that you’re going to collaborate together, but I don’t know. Just watching that movie was where I got very excited about her, she was natural and beautiful and interesting. 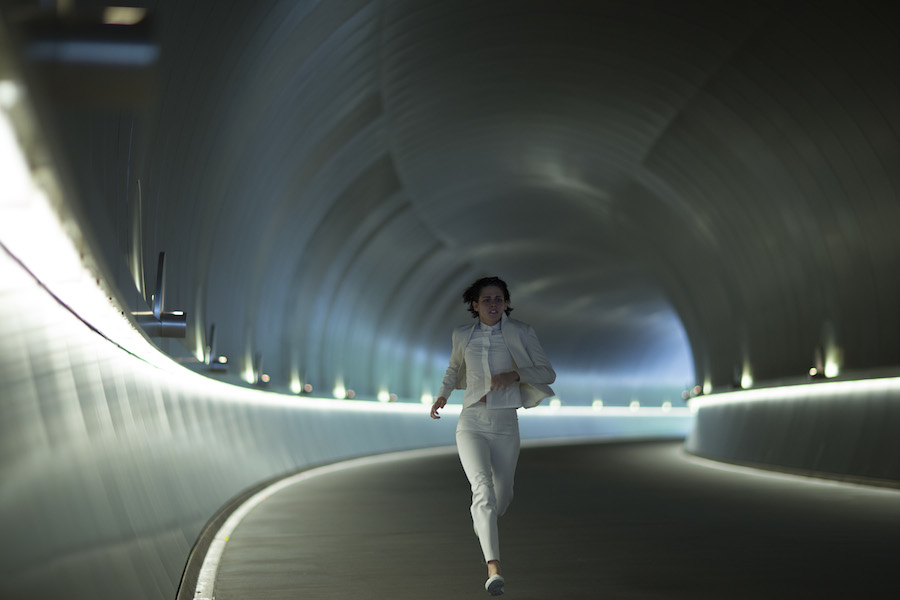 Along with your actors, your locations stand out. They're futuristic-looking but real buildings, and this indie's scale is even bigger because of it. How did you get them, and how did they fulfill your idea of what you wanted the movie to be?

We looked all over the world: South America, Europe, to try to find these locations that had these sterile, concrete beauty to them while also having these very green, zen-like elements mixed in. And then we started finding these buildings all over Japan, and it was so cool to find these buildings because they were museums and institutes and so many of them are featured in the film. And there’s a tunnel that’s an art piece, and we just wouldn’t have been able to do the film without them.

As a filmmaker you’re trying to get an audience to come aboard where a movie is monotonous, what was your strategy to present a welcoming, lively version of a world that ultimately isn’t?

I wanted to present a utopia in the beginning, and a society where so many things are right, where so many things are beautiful and harmonious, and we’ve come to a place where we’re progressing to actually advancing the human race. But because of that, I think we’ve distanced ourselves very much and it’s scary of how we meet people, and how we interact with people, especially in Los Angeles [laughs]. But from there, going forward I really wanted to let the film to be texturally and tonally and even color wise to let that take over and become this warm, intimate love story.

What other films inspired the idea of creating a warm movie with visual and sound?

That was just in our hearts. We hadn’t seen anything like that. We just wanted to pull images, and music was a great inspiration, all the great bands that are really cool, exciting, ethereal pieces that we got to use.

Do you have an interest in exploring these ideas on a larger scale? If someone offered you a giant sci-fi movie would you be interested?

No, I feel like this is kind of the biggest … I don’t know, man, I don’t know what the future holds. Yes, I know I want to make bigger films at some point, things that resonate, things that are right and make me say, “Okay, yes, this is what I want to go do.” But to be honest I’m looking forward to going back and making some smaller films as well. At the end of the day, to me it’s about making stuff that I feel like are time capsules, and what I have to say about relationships or love right now, whether it’s a giant or smaller movie, it’s kind of irrelevant to what is being said or made.

You see films as expressions of a certain time, and maybe you’ll look at them completely differently 20 years later.

Oh, completely, man. I can’t find a way in, it wouldn’t be honest to me if I made a film that was like, “Oh, this is a great story, so let’s make this.” No, that’s bullshit. What’s honest is, “Okay, where am I at, what am I thinking, what is my experience?” If I don’t do that, I can’t find a way in.

I’ve heard people talk about tattoos like that, where it designates where people are at in a certain point of time, and I live it with the rest of my life.

These are like tattoos, they’re forever. They last forever, and they don’t go away. These are visual tattoos.

What was it within the experience of making "Equals" that was a particularly new challenge for you?

Technical aspects, for sure. I had to learn a lot and I am still learning a lot, and there were over 750 visual effects shots, and I had to have patience with the process, which was very difficult. It’s very frustrating, the learning curve, and I’m the least technical person I know. I was lucky to have John Guleserian, my DP, be so savvy with it and so patient with me. He did such a great job integrating it all.

Did working on this film give you a new appreciation for Hollywood movies doing these kind of effects week-by-week?

Very much. It did both. It made me appreciate the artistry that goes into that, for sure. But it also made me not appreciate what a business it can be sometimes, and a factory. You can’t, in that machine, lose sight of the beauty and personalization of cinema. But these guys are artists, they’re incredible. They’re filmmakers in every right.

As a film fan, do you find yourself gravitating more towards practical effects? Special effects over VFX?

Absolutely. Anything that we can do in-camera ... I’m so impatient and I just want to feel it all, and I want it to be present for the actors, and not have them use their imagination. I think it’s just so exciting to have everything there, and to be as natural as possible. We did that. All the stuff in the apartment, that’s rear projection outside the windows, and it’s all live, and the actors are working with it. There’s no green screen in the film. It’s organic as effects we can make, and that’s something I’m really proud of.