As Brian previously stated, thematic coherence sometimes manifests in festival dispatches accidentally. As various schedules shifted, coverage swapped, and a broken laptop was fixed by dedicated Geniuses, I ended up covering three films at TIFF from acclaimed writer/directors, all of whom are easily recognizable either through their subject matter or their particular approach.

Armando Iannucci has built a successful career on satirizing the inherently corrupt, shortsighted nature of politicians who ostensibly work to help the masses, but really only help themselves. Though best known for his TV shows “The Thick of It” and its more successful, less cunning American adaptation “Veep,” Iannucci also co-wrote and directed the best political satire since “Dr. Strangelove”: the 2009 feature “In the Loop,” a pitch-black comedy that lampoons the lead-up to the Iraq war and the detached brutality of global Bush-era foreign policy. “In the Loop” mostly tracks the behind-the-scenes aides pulling the strings for their bosses as they conspire to invade the Middle East, but though Iannucci plays their venality for near-constant laughs, he never quite forgets the stakes of their decisions. In one of his final roles, James Gandolfini plays Lieutenant General George Miller, a senior military assistant who pushes for peace because he actually knows what it’s like to be on the ground. When asked how many troops they’re going to eventually need to invade, he does the calculations and quips, “Twelve thousand troops. But that’s not enough. That’s the amount that are going to die. And at the end of a war, you need soldiers left, really, or else it looks like you’ve lost.”

However, Iannucci decidedly relegates the reality of war to the background of “In the Loop” because a) it’s not quite relevant to the story he’s telling and b) it’s not exactly, um, funny. In his newest feature “The Death of Stalin,” he doesn’t shy away from the ugly realities of the Kremlin’s “extracurricular” activities—frequent executions, state-sponsored kidnapping and torture, mass rape, etc.—amidst a comic story about the political fallout after Stalin’s sudden and untimely demise. Credit to Iannucci for not trying to either soften said reality or rendering it all a joke, but unfortunately it does affect the efficacy of most of the film’s humor beyond the horror in the background.

The film’s story is fairly straightforward: Stalin dies, and the various party leaders all push to take control. Though the gullible, dim-witted Georgy Malenkov (Jeffrey Tambor) technically takes charge, the chief of Soviet security Lavrentiy Beria (Simon Russell Beale) overplays his hand and tries to pull all the strings, forcing Nikita Khrushchev (Steve Buscemi) to stomp him out. The actual mechanics of Khrushchev’s plot shouldn’t be revealed, although the film is so well-researched that one could look it up and be apprised of exactly what happens, but suffice it to say that various alliances form and dissolve, policies are enacted and reversed, people act as allies and then devolve into enemies. In short, it’s very much an Iannucci project, and while familiarity with his worldview might breed a sense of repetition, his diagnosis of political amorality is nonetheless spot on.

But even correcting for the tricky balancing act Iannucci must achieve while working in this particular subject matter, “The Death of Stalin” just isn’t as funny as the writer/director’s previous projects. At least some of that has to do with the lack of a truly dynamic lead performance (Tambor, Beale and Buscemi are all talented in their own right, but none of them accomplish what Peter Capaldi did in “The Thick of It” and “In the Loop”) but it’s more that the film’s setting precludes many avenues for comedy, especially because of its commitment to realism. It’s tempting to imagine a more self-consciously cartoonish version of the film that would treat the Soviet Union with less severity, but if that were the case, it simply wouldn’t be an Iannucci film. Instead, we’re privy to an occasionally funny, often straight-faced film about a cruel leader’s cronies and how self-interest doesn’t stall for death. 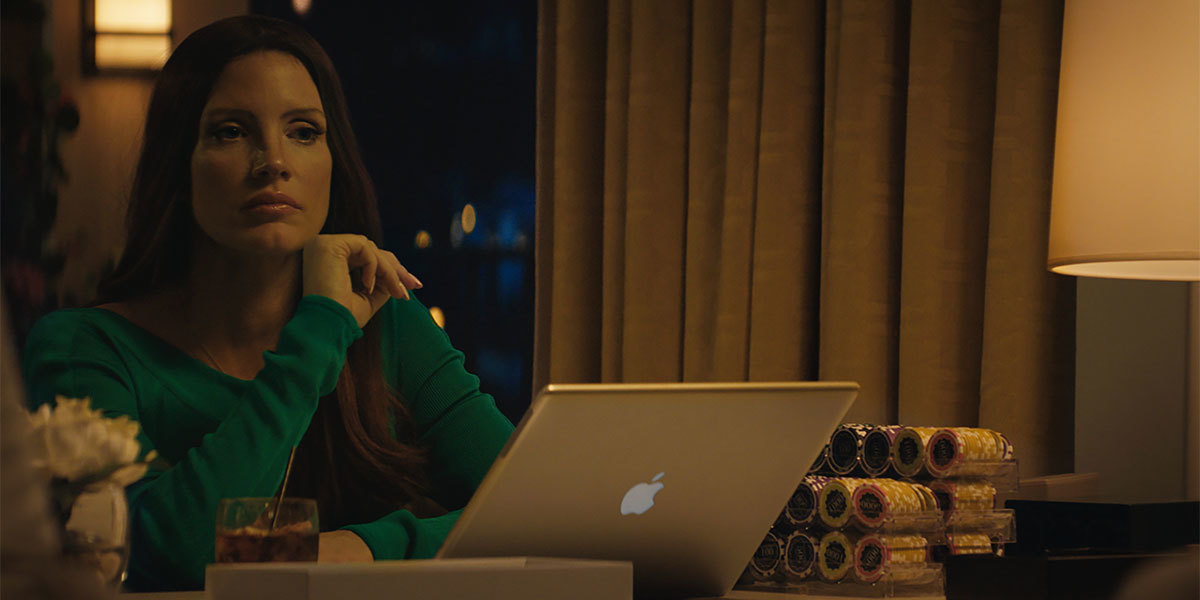 Meanwhile, Aaron Sorkin, another immediately identifiable writer but less for his subject matter and more for his linguistic tics, premieres his directorial debut “Molly’s Game.” This absurdly entertaining film follows Molly Bloom (Jessica Chastain, very well suited for the role), the self-made entrepreneurial proprietor of Hollywood poker games before landing at the center of an FBI sting operation. Sorkin cuts between Molly’s rise to power in the backrooms of Los Angeles following her fall from grace as an Olympic skier and her meetings with her lawyer Charlie Jaffey (Idris Elba, who moderately succeeds in maintaining an American accent while keeping up with Sorkin’s writing), who repeatedly tries to get her to sell out her “clients” so she can cut a better deal with the prosecution.

Though Molly’s glamorous poker adventures are more superficially exciting than her face-offs with Jaffey, which pale in comparison to the similarly framed deposition scenes in “The Social Network,” Sorkin has a unique ability to make it all sing even when sometimes you can hear the strain in his voice. Make no mistake: “Molly’s Game” features uncut Sorkin, and introduces itself as such with a lengthy opening sequence that follows Molly’s brief but disastrous skiing career that includes bare exposition, dramatic architecture analogies, and semi-relevant statistics, all of which are communicated at appropriate Olympic speed. While Sorkin gleefully doubles down on the writerly strategies that have helped him in the past, he also dodges most of his usual traps this time around. Almost by design, this is his least casually sexist script possibly ever, and though he psychologizes Bloom’s actions as an extension of her strained relationship with her father (Kevin Costner), that motif isn’t exactly gendered as it also resides at the center of his last script “Steve Jobs.”

It goes without saying that if you find Sorkin’s writing tin-eared or unbearable, this will absolutely not change your mind. However, if like me you find his style to be infectious and deliriously fun, albeit fluffy, then “Molly’s Game” will hit all the right marks. Moreover, Sorkin’s first foray behind the camera is steadier than anticipated; he has a few visual tricks up his sleeve, some clearly stolen from David Fincher, but he and his three editors keep the pace brisk, the information clear, and the performances centered. There are a few hiccups here and there, especially in the last 20 minutes which features a scene between Costner and Chastain that will almost surely inspire eye rolls, but the frequent pleasures of “Molly’s Game” more than make up for the occasional lapse into Sorkin indulgence. 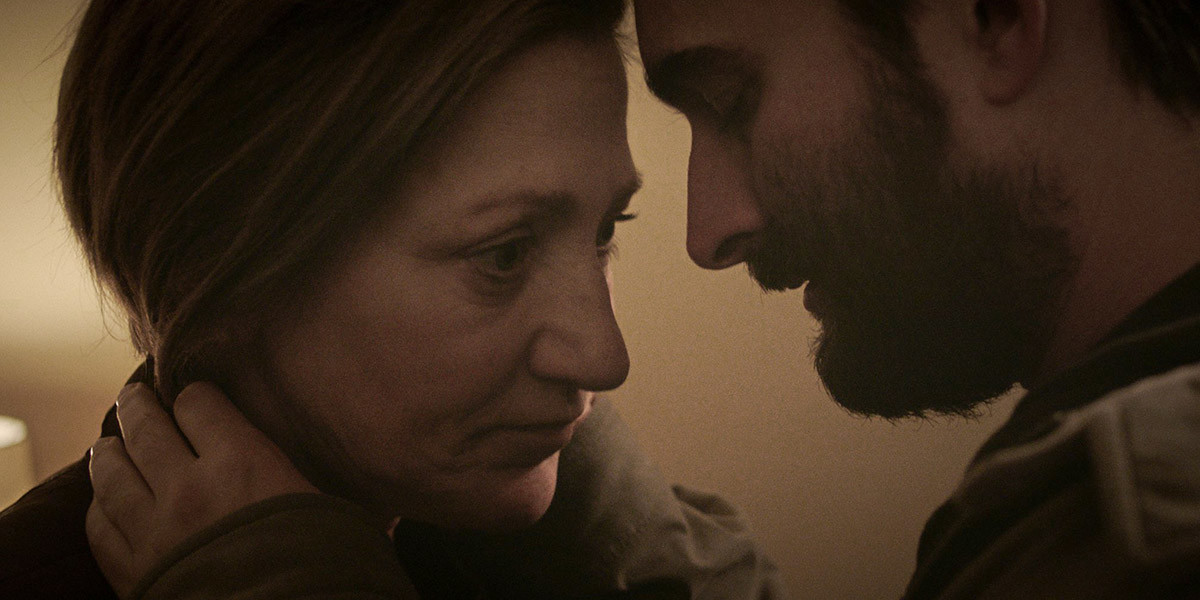 Finally, writer/director Lynn Shelton returns with “Outside In,” her first script in four years, albeit co-written with the film’s star Jay Duplass, but unfortunately it doesn’t make much of an impact. It follows Duplass as Chris, a man who has just been released from jail after 20 years for a crime he didn’t commit. He predictably struggles to readjust to normal life, which now includes things like smart phones, texting, and Internet videos. When he’s not trying to land a job or laying about, he pursues a relationship with his married former high school teacher Carol (Edie Falco) who helped to get him released. He believes they have a special connection, but Carol isn’t exactly sure, especially considering how much her efforts to get Chris released have negatively impacted her marriage with the stern, indifferent Tom (Charles Leggett).

“Outside In” shines in its tossed off moments mostly related to Chris’ readjustment to the modern world, like when Chris learns how to print a Word document, or when he takes a freeing bike ride to a skate park, or when he learns from Carol’s daughter Hildy (Kaitlyn Dever) that the word “retarded” is no longer an accepted part of the vernacular. But the film suffers from a crushing sense of predictability; every beat is telegraphed from a mile away and Shelton goes to lengths to tie every arc by the end. Falco and Dever command the screen with the little they’ve been given, but Duplass is the liability here as he’s unable to fully sell Chris’ plight, especially since it’s mostly internalized. It’s a breezy, earnest film about powerful connections and lost time, but it never quite gets off the ground like it should.