In 2013, the Chicago Film Critics Association, for which I serve as Vice President and for which Roger Ebert was a member of the Board of Directors, became the first critics group to produce its own film festival. Our lineup featured the Chicago premieres of Sarah Polley’s “Stories We Tell,” Chad Hartigan’s “This is Martin Bonner,” Jordan Vogt-Roberts’ “The Kings of Summer,” and James Ponsoldt’s “The Spectacular Now,” along with a special screening of William Friedkin’s “Sorcerer” with the director in attendance. It was a smash success. This year, the festival committee, on which I sit as Producer, expanded the event from a weekend to a week and moved the festival from the suburbs to the legendary Music Box Theatre in the heart of the city. With a diverse array of guests that includes David Wain, Martin Starr, Bobcat Goldthwait, Dick Miller, and more, the Second Annual Chicago Critics Film Festival begins this Friday, May 9th, 2014.

Members of the CFCA see films at festivals all over the world and the purpose of the film festival is to bring that experience back to the Windy City for a week. Every film, more than two dozen of them, has not only been seen by a CFCA member as a part of film festival coverage but is a Chicago premiere. Festivals represented include Cannes, Toronto, Sundance, Slamdance, SXSW, London, Fantastic Fest, and many more. Tickets are on-sale now and more information can be found here. Full passes for every single film and the closing night party are only $150 while individual tickets run $12-15. The highlight of each night (in case you can only do one a day) is listed below: 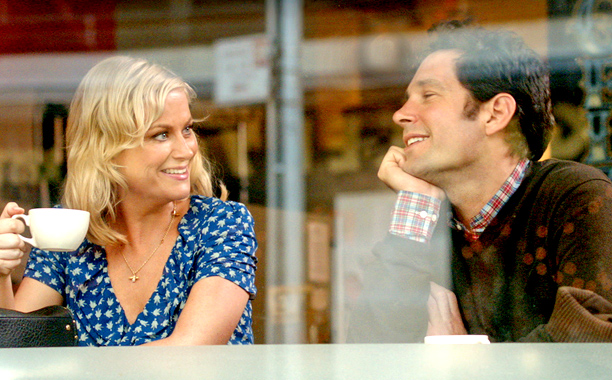 The event kicks off with the Chicago premiere of the latest comedy from David Wain (“Role Models,” “Wet Hot American Summer”), a spoof of rom-coms called “They Came Together,” which stars Paul Rudd, Amy Poehler, Bill Hader, Ellie Kemper, Cobie Smulders, Max Greenfield, Chris Meloni and many more Wain-verse regulars. Rudd & Poehler play a couple on a double date (with Hader & Kemper) who opines that their courtship was “like a romantic comedy.” The film plays out like a cliché-ridden flashback in a bad Sarah Jessica Parker movie as Wain and his team skewer the conventions of the genre by embracing and overplaying them. The director will be there to answer questions when the laughter subsides.

Opening Night continues with a pair of eccentric flicks from different corners of the world. Documentary “Supermensch: The Legend of Shep Gordon” marks Mike Myers’ directorial debut as he chronicles the career of a Hollywood insider who fell into a life that crossed paths with Janis Joplin, Jim Morrison, Jimi Hendrix, Pink Floyd, Alice Cooper, and more. Gordon helped usher in the era of the celebrity chef and was basically there for all the parties of the ‘70s. The Shep doc is followed by a great midnight horror movie from New Zealand called “Housebound” that is so ingeniously plotted that I wouldn’t dare spoil any of it. The brief description: A troubled young woman is forced to home and has to deal with an eccentric mother who is laughed at when she says her house is haunted. Maybe she shouldn’t be laughed at. 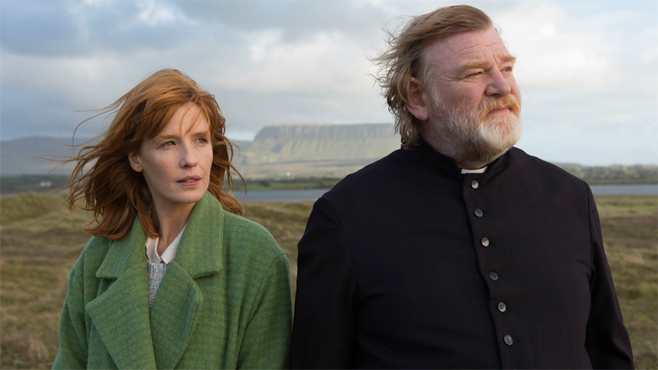 You only get one Saturday in a week-long film festival and this one has been programmed with a fantastic variety of titles from around the world, including three 2014 Sundance hits. My personal favorite film of Sundance 2014 (and I saw over 30) was John Michael McDonagh’s “Calvary,” a fascinating examination of religion’s purpose in a small village that may not need the institution any more. In arguably his best performance, Brendan Gleeson plays a good priest who is told in the morning confessional that he’ll be killed in a week. His murderer is a man who has been abused by a church authority figure in the past and needs vengeance. However, killing a bad priest wouldn’t make headlines any more. So, he’s going to kill a good one. Largely through discussions of faith and forgiveness with a supporting cast that includes Kelly Reilly, Chris O’Dowd, Aidan Gillen, Isaach de Bankole, Marie-Josee Croze, Domnhall Gleeson, and more, McDonagh crafts a drama that didn’t really hit me until its powerful ending. Like a brilliant sermon.

Just the Gleeson film would be enough to justify a trip to Southport Ave. on Saturday but it’s far from alone.

The first of two shorts programs premieres kicks off Saturday. I couldn’t possibly go over all the shorts so click here if it’s something that interests you and check out a trailer of the hand-chosen short films at this year’s CCFF.

Leading out of the shorts, the fest debuts the Slamdance Audience Award winner for 2014, “Copenhagen” by Mark Raso, an excellent drama that features a breakthrough performance from Fredrikke Dahl Hansen as a 14-year-old who happens to fall in love with a much older, boorish American tourist trying to find an ancestor in the titular city. Raso delicately handles his sensitive, controversial subject matter in a way that never feels exploitative.

Charlie McDowell’s “The One I Love” follows and boasts the star power of Mark Duplass and Elisabeth Moss as a couple sent away on a couples’ retreat that gets a little “Twilight Zone”-esque. Moss has never been better on film and McDowell’s dramedy captures the balance between wanting the best version of our partner and accepting the real one.

The night ends with two of the most unusual films at 2014 CCFF with Nazi zombies and animated icons. Tommy Wirkola’s “Dead Snow: Red vs. Dead” picks up immediately where the last cult hit left off and turns the volume up to eleven. You’ve never seen so many uses for zombie intestines. As “Dead by Dawn” was to the first “Evil Dead,” the blood and gore have been intensified and the result is a slapstick bit of horror insanity. “Silicon Valley” star Martin Starr and the great Jocelyn DeBoer will be there for a Q&A after the screening.

An amazing Saturday ends with Ari Folman’s “The Congress.” The director of “Waltz with Bashir” delivers another genre-bender as his futurisitic vision stars Robin Wright as a version of herself asked to sign away the digital rights to, well, Robin Wright. Future productions will star Robin Wright at her “Princess Bride” beautiful for all eternity. And then, well, “The Congress” goes to places that feel reminiscent of “Brazil” or even “Paprika” but with Folman’s distinct voice. 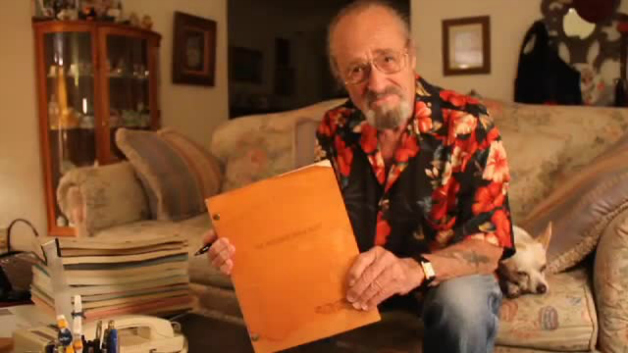 You may not know the name Dick Miller but you know the face. The star of nearly every Roger Corman and Joe Dante film finally gets the appreciative documentary he deserves in the fantastic “That Guy Dick Miller,” and he’ll be there after the screening to discuss his career and even show his breakthrough film “A Bucket of Blood” in its entirety, ON FILM. Dick Miller has been there over so much of Hollywood history that you should be there just to hear him discuss it. And you’ll get a great movie out of it too.

Speaking of great documentaries, come to the Miller event early and see my favorite documentary from Sundance 2014, Jesse Moss’ “The Overnighters.” When a small town in North Dakota suddenly becomes the center of an oil boom, it turns into a modern Deadwood. People from all over the country descend on this religious community with nowhere to sleep. A Pastor takes them in, letting them sleep on his floor, while his parishioners question where charity intersects with reality. It’s a fascinating documentary with a stunning final twist that recasts everything that came before it in a new light.

The two Mother’s Day documentaries are sandwiched by a pair of foreign films Carlos Marques-Marcet’s SXSW hit “10,000 KM” and Michel Gondry’s “Mood Indigo.” What better gift could you treat mom to this year than films from around the world that she may not get a chance to see again? 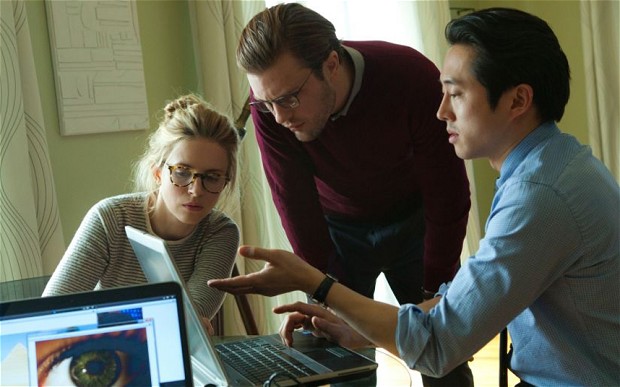 Mike Cahill and Brit Marling have forged one of the more unique partnerships in independent film with 2011’s “Another Earth” and their 2014 follow-up “I Origins,” a film that won a special sound award at Sundance and should really sound amazing in the big house at the Music Box. Again, this is the kind of film for which knowing as little as possible is the best way to enjoy it. It’s a major Chicago premiere from a major independent filmmaker on a Monday night. What more do you need to know?

The Cahill film is preceded by the second set of short films, including one starring new “Daily Show” correspondent Jordan Klepper, and followed by the fest hit “Frequencies.” 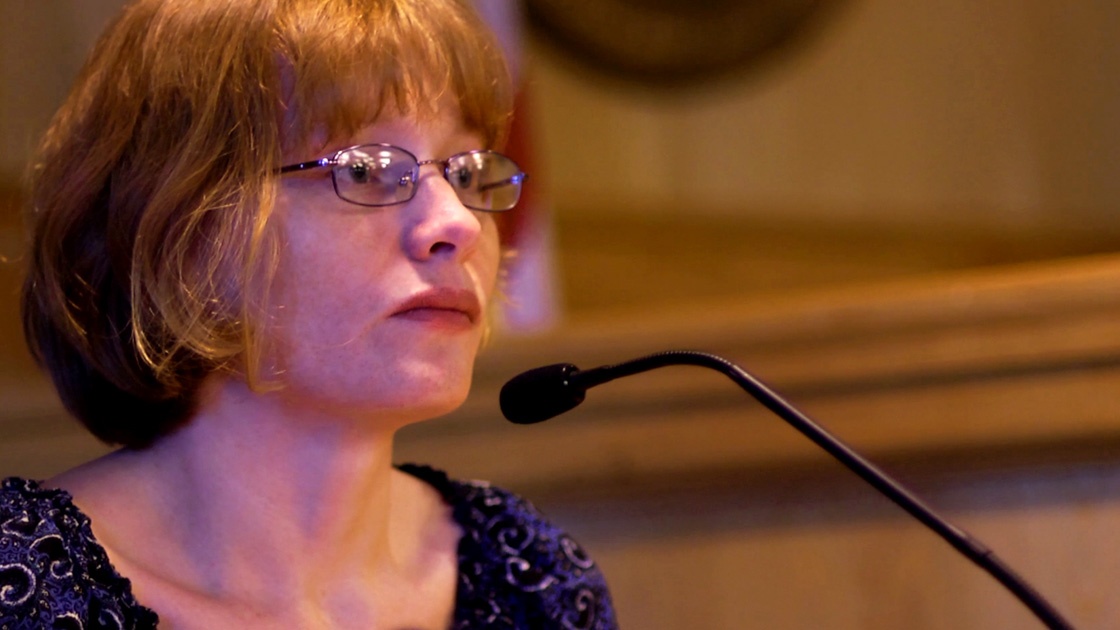 What an amazing day. The highlight is the first film mostly because you should really try to be there for all three. Cynthia Hill’s “Private Violence” is a searing, painful non-fiction piece about two women fighting for justice in a world that still considers domestic violence something to be shamed or pushed behind closed doors. In it, you will meet truly brave people, those who stand up to unimaginable situations and help others try to escape them. It’s not an “easy watch” but it’s a rewarding, emotional one and a reminder that we can no longer ignore issues like domestic violence if we want to do our part to stop them.

Jordan Vogt-Roberts makes his second CCFF in a row with “Nick Offerman: American Ham,” a concert film that captures the “Parks and Recreation” and “The Kings of Summer”’s stand-up tour. JVR will attend the screening.

Finally, there’s the fantastic “Starred Up,” a British prison drama featuring a great supporting turn from Ben Mendelsohn and a breakthrough performance from Jack O’Connell. Remember the first time you saw Tom Hardy? It’s like that. 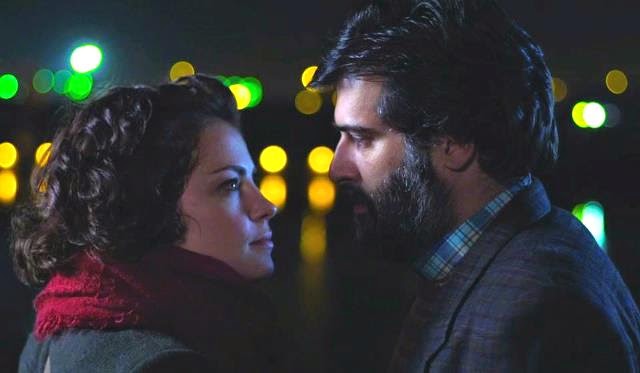 Tellez is a prestigious film critic exhausted of rom-com clichés who starts living out his worst nightmare as the clichés of his least favorite genre enter his real life. “El Critico” is a clever, fun comedy that gets at something about how critics look at cinema and how the archetypes that we love to dismiss in films can sometimes invade our home lives as well. It’s clever, fun and so perfect a subject matter for a film festival programmed by film critics that it’s sick.

Bobcat! The great director of “World’s Greatest Dad” and “God Bless America” returns to Chicago with a found footage horror film about bigfoot called “Willow Creek.” Goldthwait has become a fascinating filmmaker, always delivering product with his distinct voice. The night opens with an Australian drama called “Mystery Road” that plays like a modern Western. It’s one of the few films this year that plays like a whodunit and features a great supporting performance from Hugo Weaving. 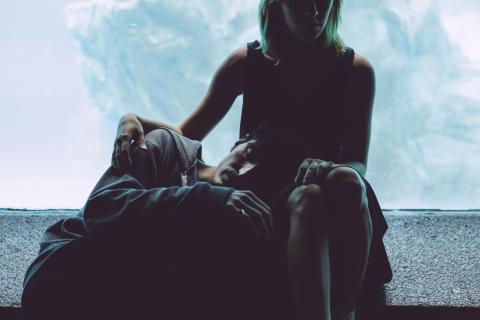 The festival ends with “Animals,” one of the best dramas of SXSW, and a film shot entirely in Chicago. Star/writer David Dastmalchian gives a breakout performance as a young man who lives in his car with his girlfriend as the two always search for that next fix. With echoes of Gus Van Sant’s “Drugstore Cowboy,” “Animals” is a breakout film for everyone involved, a riveting drama about codependence in the life of two junkies who may love each other so much that they’re dragging each other down into their addictions.

The final film of CCFF is preceded by two Park City comedies, Slamdance hit “I Put a Hit on You” and Sundance fave “Obvious Child.” If the purpose of CCFF is to bring film festivals to Chicago, the final night allows you to jump from Slamdance to Sundance to SXSW, all in the same theater.