There’s a knack to squeezing through the crowd to enter the Palais for the big press screenings of competition films if you hope to get a highly desirable aisle seat. There are no lines for the main floor section, just hundreds of journalists in a body-to-body mash, all funneling to a narrow gate where the passes get scanned by guards. Once the gate is open, the crowd surges forward with scary force. Bruce Lee said, "Be like water," and it helps: offer no resistance and use the energy of others to move forward. I employ the slither and the baby-step shuffle to slip into the smallest opening like a ghost.

When I got into the theater tonight for the press premiere of David Cronenberg’s "Maps to the Stars" there were some ghosts on the screen, but the biggest specter in the room was the pale ghost of the Cronenberg whose work I had once liked and admired. The master of body-loathing, the great explorer of the technology of viscera reached career heights with films like "Videodrome" and "The Fly," and moved into powerful new territory with "A History of Violence." I thought "Cosmopolis," seen at Cannes in 2012, was a fluke, but it’s as if a Cronenberg imposter directed "Maps to the Stars." 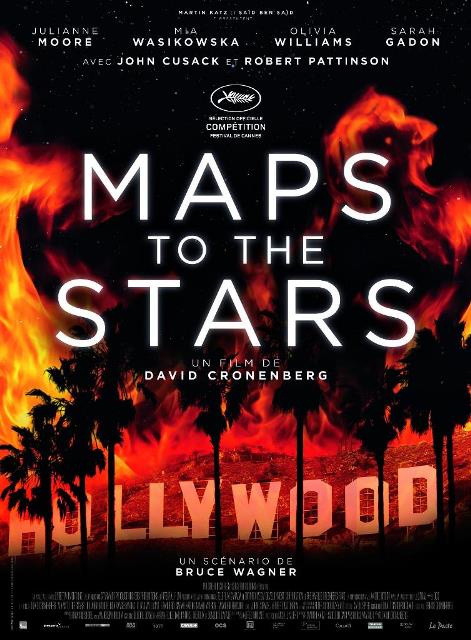 Based on a script by novelist Bruce Wagner and set in Los Angeles, where it was shot, the black comedy "Maps to the Stars" has the aspect of a film industry home movie. There are copious insider references to industry players, some mentioned only by first name but drawing knowing laughs from the Cannes audience, rehab and name-brand drugs, and things like contracts, percentages and grosses. The film surfs celebrity culture with such a flurry of name-dropping that it’s a veritable Who’s Who of mainstream and indie filmmaking.

When the semblance of a plot emerges there are mirror-image themes of incest and of death and disfigurement by fire encompassing characters with overlapping relationships. Havana Segrand (Julianne Moore) is a neurotic, aging actress vying for the role of playing her own mother, a former star, in a new film. Child star Benjie (Evan Bird) is a teen heartthrob with a ruthless stage mother. His father (John Cusack), a vain, driven New Age therapist with a TV show, helps clients locate their "magical child."

Facially disfigured Agatha (Mia Wasikowska), a new girl in town, hooks up with an actor moonlighting as a limo driver (Robert Pattinson), and gets a job as Havana’s personal assistant thanks to a Hollywood Twitter buddy (Carrie Fisher playing herself). Agatha is concealing a whopper of a secret, and has a mysterious and persistent interest in Benjie’s family. Some of these characters see people from their past who aren’t there.

"Maps to the Stars" looks and feels clunky and disjointed. It sounds good on paper, but it’s a mess on the screen. Other than the evidence of Agatha’s scars, Cronenberg’s once-profound fascination with the body as dark vessel and blank canvas is limited here to off-putting incidents around the subject of excrement. There’s one murderous rampage that has the force of his earlier work as it teeters in its excess between horror and comedy, but otherwise the film is as blunt, unsubtle and graceless as the scene in which John Cusack’s angry fists pound a prone woman’s chest.