The world’s largest classic film festival doesn’t happen in Los Angeles or New York. Since 2008, all roads for vintage movie buffs have led to El Paso, Texas, for the annual Plaza Classic Film Festival. Like many things in the Lone Star State, it lives up to the Texas credo of bigger and better.

Perhaps the biggest attraction is the Plaza itself, a 2,050-seat Atmospheric-style movie palace saved from demolition in 1987 by the El Paso Community Foundation and local activists. In 2006, the Plaza underwent a $40 million restoration as a performing arts center. Now listed on the National Register of Historic Places, the theater truly comes alive during the annual festival, which is presented and sponsored by the El Paso Community Foundation. Along with the Plaza, films were screened at the 191-seat Philanthropy Theatre (built in 2006 as part of the restored Plaza complex), outdoors on adjoining streets and atop a nearby parking garage, in the auditoriums of a nearby museums and the public library, and in the charitable organization’s own Foundation Room banquet facility.

Additionally, the Plaza Classic collaborated with the local history museum on the exhibit “A ‘Giant’ Story: When Hollywood Came to West Texas,” which includes a trio of costumes from the Warner Bros. Corporate Archives, documents, production art and photographs from the Academy of Motion Picture Arts and Sciences and loans from private collectors. It is up through September 18.

Organizing this enormous undertaking is Doug Pullen, the festival’s program director (who took over in 2013 from founding artistic director Charles Horak). Though the festival draws primarily a regional crowd, its national audience is growing. Of this year’s estimated attendance of 40,000, about 15 percent came from outside the area (including several veterans of the annual Turner Classic Movies Film Festival and even TCM staffer Scott McGee, returning for his third year). For Pullen, his staff, the Plaza stage crew and projectionists, and the many volunteer ushers, what’s paramount is keeping the festival as “a celebration of the finest movies ever made.”

Among the many memorable moments and movies at this year’s event: 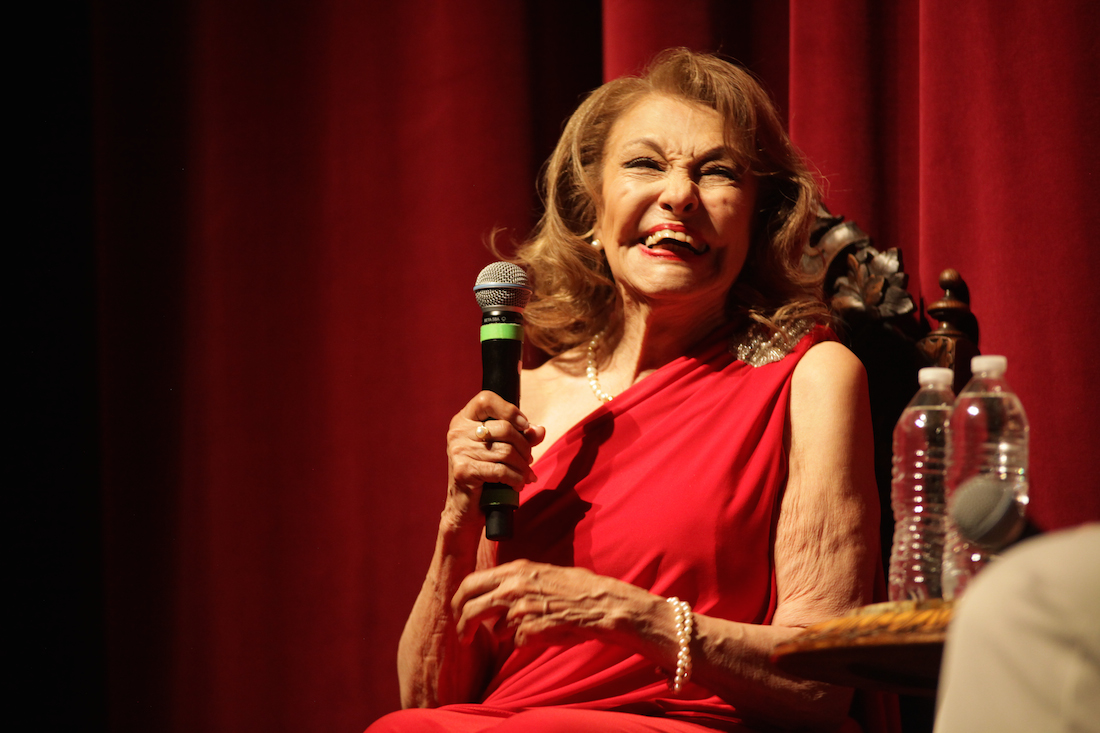 George Stevens’ “Giant” (1956), an epic drama about societal, cultural and generational clashes among Texas ranchers, drew a capacity crowd, thanks in part to the appearance of Elsa Cárdenas (pictured above), who played Juana, the Mexican woman who marries into the Benedict family (headed by Rock Hudson and Elizabeth Taylor). Stevens (who won a best director Oscar, his second, for the film) shot “Giant” in nearby Marfa, Texas (180 miles southeast of El Paso), and the movie was the first American project for the Mexican-born Cárdenas, who didn’t speak English at that time. In an onstage interview conducted by Scott McGee, director of program production for Turner Classic Movies, Cárdenas called Stevens a great director, who “made a magnificent movie. I think that ‘Giant’ is for Texas what ‘Gone With the Wind’ was for Atlanta.”

Elsa Cárdenas, who has more than 100 film and TV credits, including the current Televisa series “Unforgivable,” clicked with the Plaza crowd. “Being on the border, having a bicultural community, really makes a difference,” Pullen said. “We have lots of [attendees] who are aware of her work in telenovelas and Mexican films. She really resonated with our audience.” In addition, Cárdenas told the crowd that “Giant” holds “a special place” in her heart because it was one of the first Hollywood films to address the issue of racial prejudice. Until she arrived in Marfa, however, she had not realized the degree of discrimination against Mexicans in the United States, and was shocked to discover that Mexican-American actors working on the set had to attend segregated schools and cinemas. “60 years later, the movie is still very relevant,” she said. 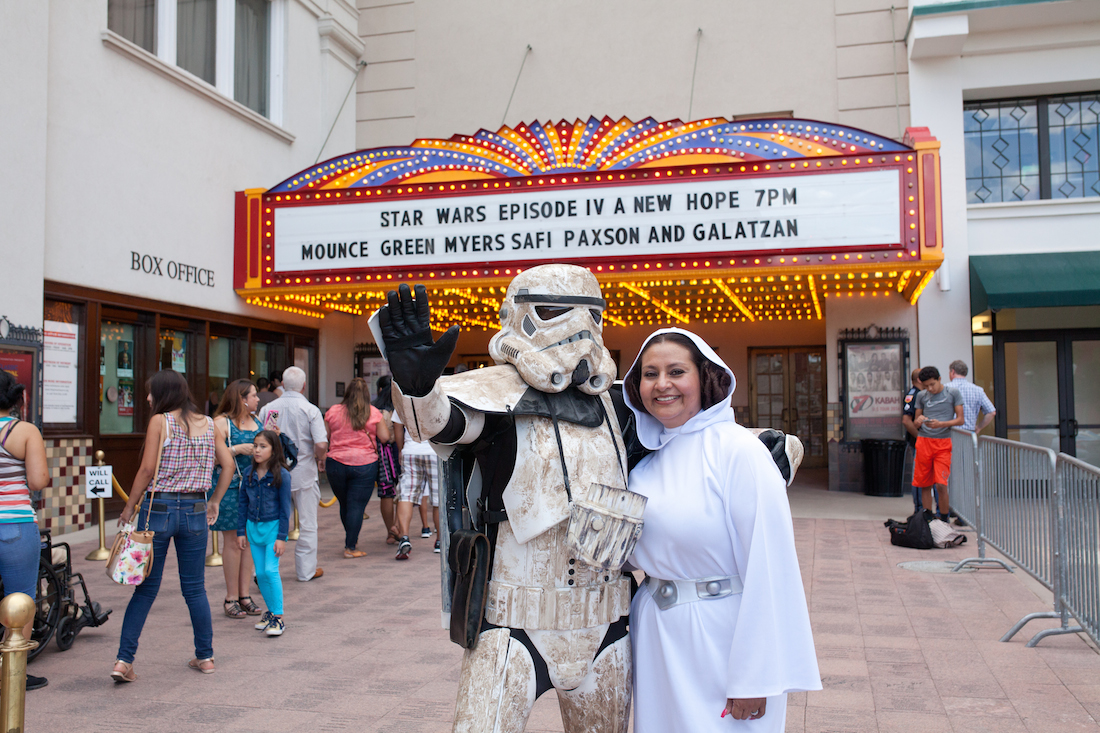 The Force is with the Plaza Classic:

The festival scored a coup by getting permission from Lucasfilm to screen the first three “Star Wars” movies, which are rarely allowed to be shown in festival settings. When the Plaza Classic screened “Star Wars” for its 2009 lineup, “that was an accomplishment in itself,” Pullen said. Since then, the festival’s programmers had hoped to book the original “Star Wars” trilogy, and the campaign paid off after Pullen wrote an impassioned letter to the studio. “The Plaza Classic is presented by a community foundation,” he said. “It’s not a typical film festival. Our festival is basically a big outreach project for [the El Paso Community Foundation].” Even so, it took many hours of negotiations to seal the deal. “Every time we thought it was done, something would happen. I got to the point where I thought, I'll believe it when I see it.” Shown in the 1997 remastered version, the “Star Wars” trilogy was screened over three nights and drew more than 3,000 people. The festival brought in characters dressed as Darth Vader, Stormtroopers and Jawas to entertain fans as they lined up outside of the theater and after they hurried to their seats. After the first screening, Pullen was surprised to get a call from the studio, “making sure everything was OK. They were great.” He admits he didn’t initially realize “what a big deal it was to book these films. Like they say, ignorance is bliss.”

Let’s do “The Time Warp” again:

Nothing brings out nocturnal crowds like an outdoor screening of “The Rocky Horror Picture Show” (1975). The cult favorite, which has become an annual festival attraction, drew an overflow audience to a screening on nearby Oregon Street. “It's got its own thing going here,” Pullen said. “It’s the eighth year that we’ve shown it, and by moving the movie to a larger space, it’s gotten even bigger. It’s definitely taken on a life of its own. It brings in a lot of high school kids, which was the movie’s original audience back in the ’70s, and also their parents, and even grandparents. ‘Rocky Horror’ has a multi-generational appeal that few movies can match.” However, it always will be out in the dark, so to speak. Due to the film’s messy time-honored audience participation tradition, “there’s no chance we could screen it inside the Plaza.”

If they show them, they will come:

Another popular annual attraction is the festival’s Local Flavor series, a showcase for short films by filmmakers from west Texas and southern New Mexico. This year’s lineup featured 41 shorts and one feature-length film. Bart Weiss, a documentarian and associate professor at the University of Texas at Arlington, hosts an annual filmmakers’ brunch at the Plaza Classic, and believes “the quality of stuff made around here is improving,” in part due to the festival’s support. “You’re building a community here, thanks to the Local Flavor showcase,” he said.

Pullen added: “We've seen people meet and make connections at the festival, and then the next year, they’re back with projects to submit [for possible screening] the festival.”

Also featured this year was “By the River,” starring Ellar Coltrane of “Boyhood” (2014) in what Los Angeles-based director Kevin Ford bills as a “a non-fiction movie about life, creativity and personal growth.” In the documentary, which was shot in 2015, Coltrane travels by train from his hometown of Austin to El Paso, Albuquerque, Boulder, Reno and northern California. At a Q&A session after its festival screening, Ford said, “It’s great to be back—literally on the same street where we shot—to share the film for the first time. I hope this is the beginning of many more stops and screenings for the film. I’m grateful for the chance to reconnect with our friends again, and to continue this journey.”

The woman who saved “The Man”:

Candy Clark, who co-starred opposite David Bowie in Nicolas Roeg’s “The Man Who Fell to Earth” (1976), discussed her experience of making the movie, filmed on location in New Mexico (including Roswell and the nearby White Sands National Monument). Playing a role not unlike one of his many stage personas, Bowie made his feature film debut as Thomas Jerome Newton, a space oddity stranded on Earth who’s befriended by a naïve hotel clerk (Clark) and betrayed by sinister government forces. “Bowie was just perfect for the part,” Clark recalled in an onstage interview, her first with the movie after numerous appearances with “American Graffiti,” for which she received an Oscar nomination. “He was very easy to work with and unlike other actors on the film, liked to run scenes,” which she attributed to his background as a musician.

For its initial U.S. release, the film had more than 20 minutes lopped off.

“The studio decided that it worked better as a two-hour film, and re-cut it in a week, hacking it to bits, after Roeg had taken nine months to edit it,” said Clark, who led the campaign to get the film restored to Roeg’s original director’s cut (which was shown at the Plaza). “I never forgot this movie. The world is finally catching up to it. It was decades ahead of its time.” (To celebrate the film’s 40th anniversary, a 4K restoration will be released in England on September 9, with a Blu-ray/DVD worldwide release on October 24.)

Between films in the Plaza Theatre, volunteer organists serenaded the crowd with movie themes, standards and even rock/pop hits (including Bowie’s “Space Oddity” ahead of “The Man Who Fell to Earth”) on the theater’s original and restored Wyler Mighty Wurlitzer Organ. “The organ is part of the festival’s charm,” Pullen said. “And this organ has a special connection to the community.” Built by Wurlitzer, the organ was installed when the Plaza opened in 1930; it was sold off when the theater was shuttered. In 1996, the organ was repurchased and sent back to El Paso, and finally in 2006, was returned to the Plaza. “The organ was an important part of the theater’s restoration,” Pullen said. “It was tracked down in Dallas, brought back and restored. The people who were involved in that restoration are still involved with the organ now. They have a passion for it, and the film festival is the best way to showcase this treasure.”Additionally, nationally known theater organist Walt Strony made his annual Plaza Classic appearance, this time accompanying the 1929 version of “The Phantom of the Opera” (electric cellist Gideon Freudmann accompanied the 1920 silent classic “The Cabinet of Dr. Caligari” as an illustration of how modern technology can do what the theater organ was created to do more than 80 years ago). 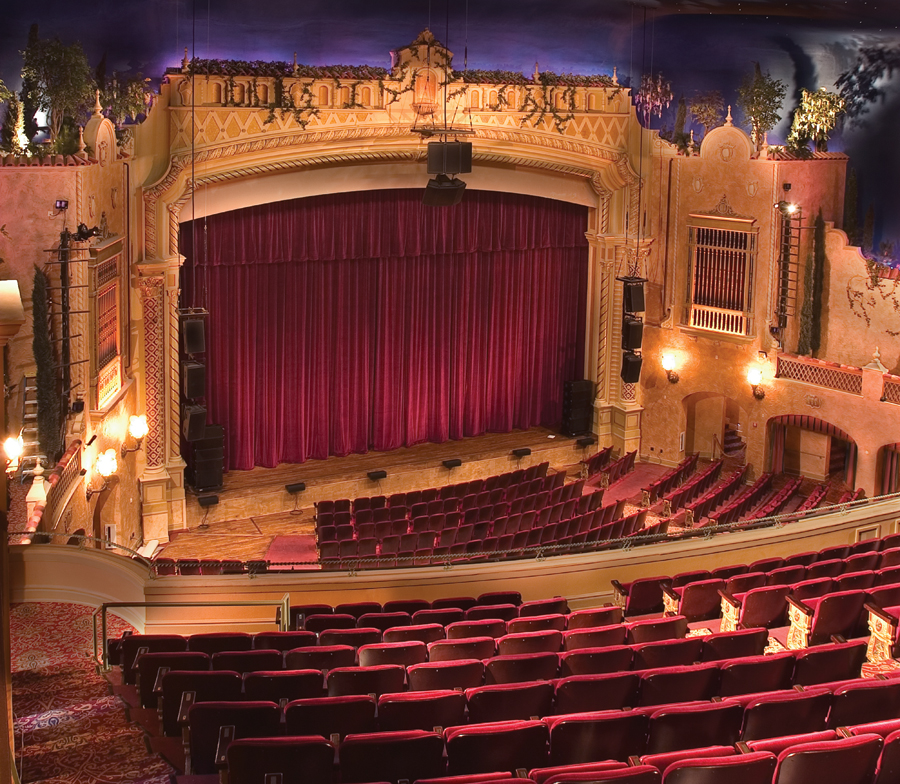 Movies the way they were meant to be seen:

In a world where people routinely watch movies on their laptops or even phones, there’s nothing like the experience of watching a film on the Plaza’s 43-foot screen, with an audience of thousands. “Sharing that experience just magnifies the sense of wonder and awe that these classic films trigger,” Pullen said. “When the festival was started in 2008 to bring movies back to the theater, we realized that the Plaza was central to a lot of memories. People would tell us, ‘My first date was at the Plaza,’ or ‘I recall seeing such and such film here.’ Nowadays, moviegoing is filled with all sorts of distractions—cell phones, crying kids, or people who are so loud, in part because the movies are so loud themselves. Here at the Plaza, you can have an experience you can’t have in a modern setting. Like when we showed ‘Jaws,’ the whole audience screamed at once. How often do you get to have that kind experience?”

Once a year, when the Plaza Classic comes back to town. Mark your calendars for next year’s 10th anniversary edition: August 3 - 13, 2017.