The programming director of the Gene Siskel Film Center in Chicago is blogging from Cannes for us.

Thursday, May 14--You can't beat the weather here in Cannes. After the cold rain and dark skies in Frankfurt, where I changed planes yesterday, the perfect, summery temperatures and extravagant displays of flowers makes this town seem even more like a Mediterranean paradise than usual.

The festival kicked off to the world Wednesday night with the first red-carpet walk by the jury, and the Pixar folks with their 3-D animated feature "Up", but for most of us in film-industry jobs, the festival is already well underway with press screenings, market screenings, and press conferences.

My Wednesday started with an 8:30 am press screening of "Up." Sitting on the main floor of the huge Debussy theater in the Festival Palais before the film started, I observed a chattering group of Italian journalists to my left, a row of Germans behind me, and Michael Kutza of the Chicago International Film Festival strolling down the aisle next to me, all typical of the international mix at just about every screening.

The 3-D glasses were passed out at the door, a swanky goggle style, unlike the cheesy cardboard 3-D glasses of decades past. The screening began with festival program director Thierry Fremaux taking the stage to request that the audience of approximately 3,000 put on the glasses for a group photo. The dozens of press photographers ranged below the stage snapped away, and Fremaux pulled a little camera out of his pocket and joined them.

"Up" has a heart-tugging quality that makes the adventure story of an old man and his eight-year-old accidental sidekick quite satisfying, but I found the 3-D aspect the icing on the cake. Sure it's well used, and a technical marvel, as one would only expect of Pixar. On the other hand, the story's the thing, and I swear you'd never miss it if you saw this film without the 3-D.

I get a seat at the jury press conference and watch the usual mob of photographers waiting at the front for their brief allowed time of unobstructed shooting before they're banished to the back of the room. Jury press conferences at Cannes follow a pattern from year to year, with every jury member doing a seemingly obligatory verbal dance around the obvious: that they've been selected to judge the competing films of their peers and choose the winners of much-coveted prizes. 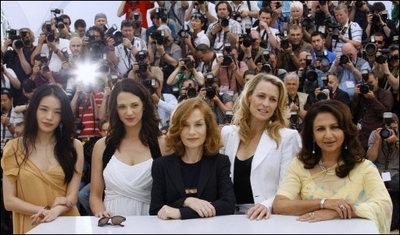 This year was no different. Jury president Isabelle Huppert, the prolific French actress ("The Piano Teacher") who press conference moderator Henri Behar described as "As part of Cannes as Cannes is part of her," opened with, "I don't think we're here to judge films, we're here to love films." Robin Wright Penn declared, "To me, the word 'judge' is so negative". But judge the films they will, and fellow jury member Hanif Kureishi, screenwriter of comedies including "My Beautiful Laundrette" and "Sammy and Rosie Get Laid" interjected, "Awards are a terrible idea, until you win one."

Huppert presides over a jury on which women outnumber men five to four. I haven't been keeping track, but I don't recall women being in the majority on a Cannes jury in the past twenty years. The other jury women include Italian actress Asia Argento ("Marie Antoinette", "The Last Mistress"), Taiwanese actress Shu Qi ("Visible Secret", "The Transporter") and Indian actress Sharmila Tagore, known especially for her early work in Satyajit Ray's "The Apu Trilogy". Besides Kureishi, their male cohorts are Turkish director Nuri Bilge Ceylan "Distant", "Three Monkeys"), American director James Gray ("Two Lovers"), and Korean director Lee Chang-dong ("Secret Sunshine").

Huppert diplomatically dodged the questions when asked more than once whether the female majority would hold sway or signal a new direction for the festival. "I'm suspicious of any approach that says there is a male or female form of filmmaking," she said. When it was pointed out that in over sixty years, only four Cannes juries have ever been headed by a woman, she responded, "Four women can count for a lot, so it's OK."

§ Most stands in the vast film market are fully set up today, and I make a preliminary sweep through the market area following "Up". Before getting down to serious market business, my first goal is to score some free stuff because in a couple days there won't be any. We're not taking about major swag here, but free pens, tote bags, and squares of chocolate, all of which come in quite handy at a two-week festival. The best of today's haul:

§ Delicious coffee-flavored hard-candies at the Indonesian film stand. (I know from last year that these are the best, and grab some daily from the jar on their counter, hoping the guy who runs the stand doesn't recognize me from day to day.)

§ A shiny gold shopping bag at the Swiss film stand, great for carrying the press kits I'll collect. It's sturdy and eminently reusable at home: wait 'til they see this at Whole Foods.

§ A colorful leopard-print lanyard for my press badge, courtesy of the Locarno Film Festival. A few stands away, an equally spiffy lanyard in red tartan courtesy of Scottish Screen.

§ A small bag of pistachios from the Iranian film distributor Sheherazad Media. (My lunch!)

One of my goals in the market is to start picking up press kits for films of all the 27 European Union nations. This begins the research for the Gene Siskel Film Center's 13th Annual European Union Film Festival in March 2010. I have my reminder list of EU nations and market contacts ready, and today I'm able to check Estonia, Lithuania, Portugal, Ireland, and Greece off the list. I learn that many new Latvian productions remain unfinished due to the economic crisis, and that films from that nation may be hard to come by. The guy at the Estonian stand gives me an invitation and promises a "liberated party" on Sunday. "How liberated could it be at 4:00 in the afternoon on the front lawn of a hotel?" I ask. "Well, that's the problem," he says wistfully. There will be vodka, though.

§ I was hoping for some shenanigans to liven things up, but Huppert's elegant reserve set the tone. I left the press conference with two opposing visual impressions: the striking gold-sequined stripes on Huppert's black tailored top, and Asia Argento's cleavage. As the jury was hustled out of the room by security, someone approached the high table and asked Argento a question privately. In a move that was clearly a gift to the gaggle of photographers standing there, this veteran of many a steamy role leaned across the table to answer, affording a photo op down the front of her Grecian-style white gown.

The work day ended with the press screening of the first film in competition, "Spring Fever" by Lou Ye. From the film's first of many explicit gay love scenes it was evident that the director has not been deterred by his frequent run-ins with Chinese censorship authorities. It's set in the city of Nanjing, where the wilder side of the city's nightclub scene figures in the background. Although dialogue is sparse, messy emotion runs high in this story of two interlinked love triangles in which a woman is the odd one out

May 9, 2009--Two days until my flight lands at the Nice airport, beginning the next Cannes festival experience, and I'm mentally ticking off everything I'm looking forward to (or not.)

It looks like a terrific year for Asian movies; I can't wait to see "Spring Fever" by once-banned Chinese director Lou Ye; "Thirst" by "Oldboy" director Park Chan-wook; "Air Doll" by Hirokazu Kore-eda, and especially "Vengeance" by Johnnie To, the Hong Kong auteur who assumed John Woo's mantle as master of the gangster genre.Delicious controversy seems assured with some of the world's most boundary-pushing directors in the official competition. I'm expecting no less than a provocative, in-your-face experience from: "Broken Embraces" by Pedro Almodovar; "The White Ribbon" by Michael Haneke; "Map of the Sound of Tokyo" by Isabel Coixet; "Enter the Void" by Gaspar Noe; and "Antichrist" by Lars Von Trier. In the out-of-competition category, I'll definitely be catching Terry Gilliam's "The Imaginarium of Dr. Parnassus" and Sam Raimi's "Drag Me to Hell". 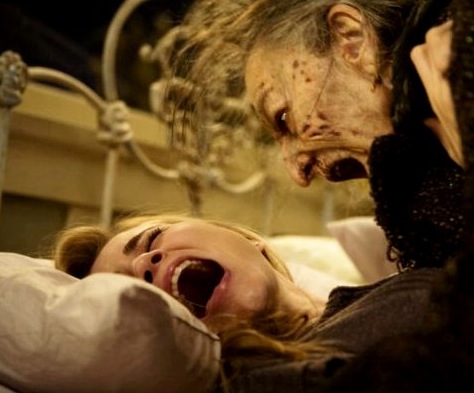 Being dragged to hell

Additional don't-miss titles on my list include: "Les Herbes Folles" ("Wild Grass") by the great French director Alain Resnais; "The Time that Remains" by Elia Suleiman; and "Bright Star" by Jane Campion. As a cat-lover, I'd be rushing to "Nobody Knows About the Persian Cats" based on title alone, even if I weren't already a fan of Iranian director Bahman Ghobadi.

• The, um, "special" hospitality of Hotel Atlantis (gives you that sinking feeling.) What adventure awaits this year? A cat-burglar crawling through my window at 5:00 am? A plumbing disaster that turns my room into a swamp for the duration of the festival? The patron tells me that my room has been redecorated. This is ominous news. The last time they did that it meant that wallboard had been nailed over a section of the flesh-toned flocked wallpaper. At least they didn't take down the plastic-framed kitten picture.

• The trampling, shoving lines to get into many of press screenings.

• The fact that some of the films with the most buzz are almost always scheduled in smaller theaters (see above item about trampling.)

• Seeing film-programmer colleagues from around the world to trade ideas, advice, and hot tips.

• Enjoying the incomparable Riviera-style pizzas: inexpensive; baked in wood-burning ovens so that the toppings are scrumptiously fused to ultra-thin, crackly crust.

• Walking through the incredible food markets and wishing I had someplace to cook those world's-most-beautiful vegetables.

Still photo at top from Raimi's "Drag Me to Hell"