Nothing brings a couple back together quite like a murder mystery. Two minds, being better than one, must find a way to put aside long-simmering tensions and jealousies, differences and anxieties, to solve something bigger than the both of them. For even the most healthy relationship that can pose a challenge, not to mention the more tangible danger of a murderer being on the loose.

Such is the comedic premise in Lawrence Michael Levine’s "Wild Canaries," a snappy rom-com sweetly infused with the tropes of detective mysteries. When an engaged Brooklyn couple, Barri (Sophia Takal) and Noah (Levine) are shocked to find their dead neighbor, Barri becomes suspicious of the neighbor’s creepy son, Anthony (Kevin Corrigan), who could have made a lot of money in a life insurance policy. She begins to unravel a larger mystery that involves their landlord Damien (Jason Ritter), his failing marriage and weird post-modern art, and a framed murder gone awry. She finds little to no support in her fiance Noah and turns instead to her best friend and roommate Jean (Alia Shawkat) for support and investigating assistance.

In many narrative respects, "Canaries" is essentially an update to "Manhattan Murder Mystery," Woody Allen’s probing but spry psychological exploration into spousal jealousy featuring an older version of Barri and Noah, placed one burrough over, Carol (Diane Keaton) and Larry Lipton (Allen). Visually, the films couldn’t be further apart. "Manhattan" is shot atypically for Allen, relying almost exclusively on handheld but mostly immobile medium long takes that contain the characters in their small apartments. "Canaries" frequently employs close-ups, zooms and sly edits for comedic effect, rapidly cutting to say, Noah’s frantic facial expression as he’s almost caught snooping—all of this, accompanied by the film’s cheesy but jarring music, results in a unique, pulpy hilarity. But the films also share substantial thematic similarities. They demonstrate how the comforts, safety and sanity required in a long-term relationship can be challenged by the human desire to intuit and probe into something deep and mysterious—such as a friend’s inexplicable death—all of which requires radical thinking and courage.

In both films, this bravery of spirit comes from the female characters, Barri and Carol, who repeatedly risk their lives—breaking into houses, spying on people until they find credible evidence, or, finally, stalking murderers into sticky situations—but such actions actually cause less damage to their relationship than the fact that they challenge their partners to humour their wild ideas in the first place. Both women become so obsessive in speculation that they drive their partners crazy. In each film, the male partner argues: Wasn’t the deceased neighbor an old woman? How could anyone possibly fake a heart attack? What are the chances of their neighbor being a murderer? It’s immediately observable that the female partner, being the more intuitive half, is not only smarter in preternaturally picking up on weird vibes, but also blessed with the bravery to investigate.

The former trait is a gendered idea, that these characters are onto something simply by having “female intuition” and feeling it so strongly they’re compelled to continue questioning the circumstances instead of dropping the matter. Both films are complicated in their gender depictions, but at the very least, no one gets to play the hero. None of the characters are actually talented at playing detective, and solving the mystery requires a high degree of collaboration from both partners, as well as a few close friends who further complicate their dynamic and arouse jealousy. Both men are emasculated through the journey: Allen’s long-established neuroticisms and cowardice come to the fore whenever Carol leads him into a potentially dangerous situation, and Noah suffers one physical injury after another, rendering him all but impotent. In both films, it’s imperative that at some point, Larry and Noah succumb to the substantial evidence their partners have unearthed and actually help them, lack of courage or a functioning neck be damned. 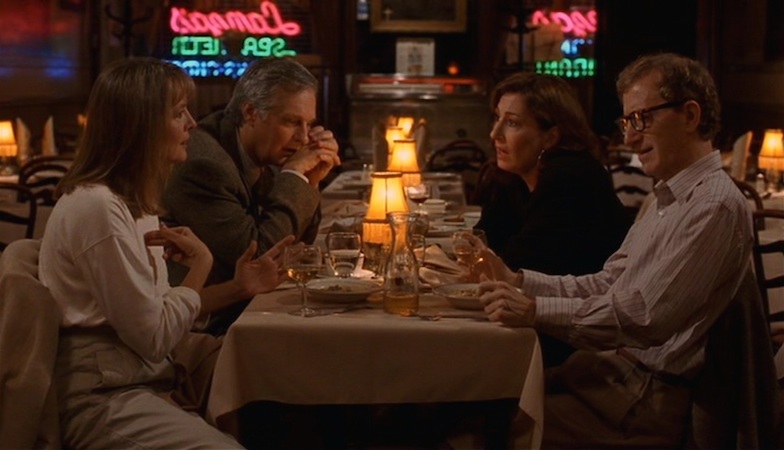 In both films, these male egos are also encouraged to help upon the realization that they might be losing their partners. Noah and Larry are both jealous of their partners’ friends, who are perfectly capable and eager to help them out, to the point of suspecting infidelity. It doesn’t help that the friends in both cases—Jean in "Canaries," Ted (Alan Alda) in "Manhattan"—are incredibly supportive of Barri and Carol’s inquests, that they’re there to answer phone calls and ruminate at three in the morning and beyond, and that they seem to possess a savviness that makes them better suited for the mystery than Noah or Larry. It doesn’t help that both Jean and Ted harbor crushes for their female friends.

But in both films, Noah and Larry have potential love interests of their own: Marcia Fox (Anjelica Huston) is the bad-ass poker player and Larry’s client who comes up with the brilliant bluffing scheme that ultimately nails the murderer. In "Canaries," Noah’s ex-girlfriend and colleague Eleanor (Annie Parisse) tries to seduce him with a massage, but he ends up developing a crick in his neck. He resists the temptation, though he agrees with her that his fiancee is a child (this is undeniably true, for all of Barri’s virtues). Yet Eleanor is also the one who ends up coming with a risky but ingenious scheme to nail the murderer. It’s perhaps unsurprising, then, that in both films Barri and Carol become incredibly jealous and defensive of these schemes—which their partners, who never seemed to care before, suddenly fully endorse—and are suddenly wary of trying to help nab the killers.

Older rom-com murder mysteries like "The Thin Man" and "The Ex-Mrs. Bradford" operated under different gender dynamics. "Thin Man" didn’t intend Nick Charles’ (William Powell) temporary return to detective work to wreak havoc on his relationship with Nora (Myrna Loy). Their frequently drunken raillery serves as the light and sassy counterpoint to the terse mystery at hand, and Nick’s involvement in finding the missing Thin Man only prevents him from imbibing as much as he would like to with his lady. But the film was made over 80 years ago, when relationship woes in comedies were frequently scrubbed clean of such self-serious tension, and fictional female detectives were few and far between.

It should also be noted that it is the sensible Nora’s suggestion that Nick provide his professional expertise, yet her interest in the case doesn’t cease once he takes up the cause. One of the more damning (though admittedly funny) moments in the film occurs when Nick tricks her into getting a cab. Ostensibly he will join her to investigate his new lead of information; however, he quickly shuts the door and sends her to Grant's tomb. The murder does pose danger to Nick and Nora, but only in a real sense, when a suspect tries to shoot him at their residence and Nick is forced to make the split-second decision to punch out Nora in order to save her from the line of fire. All of these attempts to quash Nora’s curiosity are some of the worst and most dated elements in a film that is otherwise quite delightful. 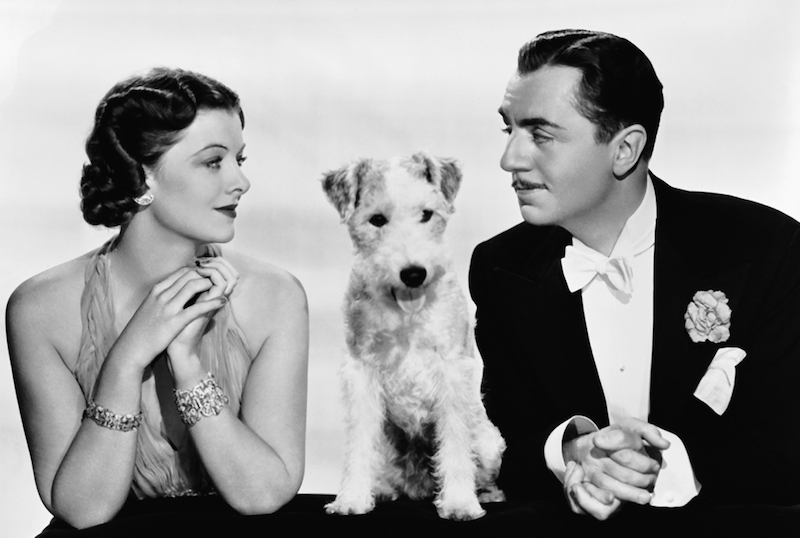 In William Powell’s other rom-com murder mystery, "The Ex-Mrs. Bradford," which came out only two years later, he stars as Dr. Lawrence Bradford, a surgeon-cum-detective who divorces Mrs. Paula Bradford (Jean Arthur) because her intense curiosity kept dragging him into solving murder mysteries and he simply couldn’t handle the drama. This being a comedy of remarriage makes it closer to the contemporary films, as the mystery is the driving force that reunites the couple. But it’s also more similar to "Manhattan" and "Canaries" in that Paula is the curious catalyst and genuinely a boon to the investigation (even if she must leave a lot of the dirty work up to her ex-husband). The tension is thicker here than in "Thin Man," and Paula’s overactive imagination makes her talented at both sniffing out real clues and seeing things that aren’t there, like when she’s startled by the butler setting up Lawrence’s hidden film projector. Like the more recent films, the couple’s teamwork is challenged by inefficiencies, like when she goes to help Lawrence fight off an intruder and accidentally knocks him out instead of the bad guy—somehow, she manages to make this mistake more than once, and even more unbelievably, they survive the ordeal and remarry.

The highly intuitive female character is a convention that can be found even in Alfred Hitchcock’s work, particularly his last film, the underrated "Family Plot," in which the film pays teasing homage to the trope by making Blanche (Barbara Harris) a psychic. Falling right smack in between the release dates of the 1930s comedies and the more recent films, "Plot" is unique in that it introduces more than one relationship dynamic. There’s Blanche and George (Bruce Dern), both of whom are quite intent on solving the mystery of a missing man, the long-lost heir of Blanche’s client who has promised her money to find him. The second relationship in the film includes the missing heir, a certain Arthur Adamson (William Devane) who faked a new identity after disguising his death as Edward Shoebridge, and his partner in crime, Fran (Karen Black). Having secretly murdered his adoptive parents years ago, Arthur likes to kidnap rich men and steal their diamonds in order to bolster his jewelry shop. His scheming is dependent on the help of his wife, who becomes increasingly wary of their illegal shenanigans throughout the movie. Their relationship-heavy dialogue underscores the thematic connection between crime and love and the sexuality inherent in risky behaviour, in which the definition of intimacy is expanded to include such fun activities as committing murder together.

Blanche and George’s relationship is not exactly rosy, either, but their rows typically revolve around their financial desperation to solve the mystery. The rich jewel-thief couple sneer at their domestic disputes, but in the end Blanche and George triumph over the criminal lovebirds. It’s not unlike the endings of "Manhattan" and "Canaries," where the murders originally start off with a couple wanting to steal money before one partner eventually double-crosses the other. These films all seem to be suggesting the same sage idea: love is better served in solving a murder together than committing one.