Thanks in large part to my deep-seated belief that virtually any Thirties-era film starring William Powell is preferable to the vast majority of the current offerings at the multiplex, I have seen the 1934 mystery-comedy classic "The Thin Man" more times than I can begin to count. And yet, despite the multiple viewings over the years, my memory remains somewhat hazy when it comes to recalling the identity of the killer. I do not consider this to be a flaw, however, because the film has so many other things going for it—the incredible chemistry between Powell and Myrna Loy, the sparkling dialogue, the stylish direction by W.S. Van Dyke and, of course, the always-delightful Asta—that the nuts and bolts of the plot wind up fading into the background in terms of importance. "Wild Canaries" is the latest film to attempt to emulate the charm of that film, with a hefty shmear of Woody Allen's "Manhattan Murder Mystery" added for good measure, but the difference here is that since this one lacks the aforementioned chemistry, sparkling dialogue, stylish direction and talented terriers, all that viewers have left to hold on to is the plot and unfortunately, that isn't much to speak of either.

Noah (Lawrence Michael Levine, who also wrote and directed) and Barri (Sophia Takal) are a hipster couple living together in Brooklyn—he is an indie film distributor and she is working on a plan to buy and refurbish a shuttered resort. Everything seems normal enough until Sylvia (Marylouise Burke), the sweet old lady living in the last rent-controlled apartment in their building, dies suddenly one day. On the surface, it looks like she suffered a simple heart attack but when her son, Anthony (Kevin Corrigan), seems oddly unaffected by her demise—he delivers a terrible eulogy at her funeral and quickly begins to sell off her furniture and valuables—Barri begins to suspect that something is amiss. When she snoops around and discovers that Anthony is having financial difficulties, Barri becomes convinced that Sylvia met with foul play. Noah pooh-poohs her suspicions at first as being nothing more than paranoid fantasies fueled in no small part by her attendance at a recent Hitchcock retrospective but as things get more suspicious, even he is forced to admit that she might be on to something after all.

The bright side to the possibility of having a murderer in their midst is that it serves to distract Noah and Barri from their own complications. For starters, his business is on the downswing and he resents Barri's desire to pursue the pipe dream involving the resort instead of getting a job and contributing to the household finances. Then there is the presence of their lesbian roommate Jean (Alia Shawkat), who is Barri's best friend and an avid supporter of the resort plan, possibly because she is nursing a not-so-secret crush on her pal that she wishes to develop into something more. For his part, Noah likes to spend his nights out drinking and carousing, either with the building's landlord (Jason Ritter), a hotshot artist in the midst of a nasty custody dispute, or with ex-girlfriend/current practicing lesbian Eleanor (Annie Parisse) and when tensions grow between him and Barri, he decides to exacerbate things further by inviting Eleanor to move in for a few days as well.

On paper, "Wild Canaries" sounds like it has all the ingredients for a reasonably diverting comedy, but they just never quite pull together into a cohesive or entertaining whole. The mystery aspect is not particularly interesting because it is sketched out in the most haphazard manner imaginable and since there are essentially only two legitimate suspects on display, the question of whodunnit never really gains any traction. Likewise, the quadrangle relationship that develops between Noah, Barri, Jean and Eleanor feels curiously underdeveloped as well. Watching it, I got the sense that Levine had ideas for two different screenplays that he could not manage to flesh out individually and, not wanting to waste anything, decided to just jam them together. Levine is clearly a fan of the mystery genre and there are any number of homages throughout—Noah lands in a neck brace that has echoes of the nose bandage sported by Jack Nicholson in "Chinatown" and Barri sports a raincoat during her sleuthing that appears to have come from the Columbo collection—but all they wind up doing is make you wish that you were watching one of those films instead of this one.

The biggest problem with "Wild Canaries" is the lack of any real chemistry between Levine and Takal. This seems a bit odd since the two are married in real life but on the screen, they are pretty much the anti-Nick and Nora and not just because of Noah's inability to handle a hangover. Their frequent arguments are presumably meant to inspire laughs but they are so forced and grating (especially a screaming bout that occurs at a point when absolute silence would seem to be the way to go) that they will no doubt drive most viewers to the edge. After a while, I found myself hoping fervently that they would be able to overcome the temptations of Jean and Eleanor and stay together because if there were ever two characters who deserved to be stuck with each other, they are Noah and Barri.

To be fair, there are a couple of funny lines here and there, the Saul Bass-inspired opening credits sequence is nifty and Shawkat and Parisse do enough with their barely developed characters to make you wish that the film had focused on them instead. However, too much of the rest of it is either silly or grating and by the time it finally flops through its increasingly ludicrous final act, most viewers will have long since given up on it. Put it this way—"Wild Canaries" isn't so much "The Thin Man" (not even the less-interesting later sequels when Nick and Nora were handicapped with a kid) as just painfully thin. 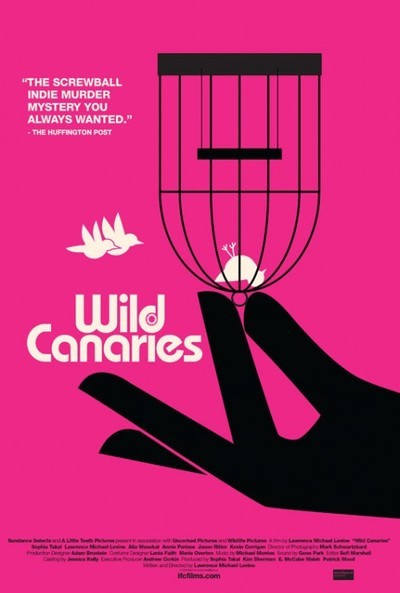