Violent Worship: The Hypocrisy of the Purge Films

Writer/director James DeMonaco’s three "Purge" films have been an exercise in futility: violent features about anti-violence, and gun-driven action movies about the horror of an NRA-dominated society. With “The Purge” franchise, he has a hell of a hook that doesn’t rely on reoccurring characters, but a holiday, in which all crime, including and especially murder, is legal for 12 hours. Appealing to America’s taste for violence and our short attention span with the tragedies caused by it, he has created one of the most popular and profitable horror series, but one that dubiously claims that its trigger finger is actually on the pulse of society. (Check out Simon Abrams' one-star review of "The Purge: Election Year.")

The idea started with a remark that his wife made after a road rage incident (“Wouldn’t it be great if we all had one free one a year?”), enhanced by DeMonaco reflecting upon America’s relationship with guns compared to other countries. From a writer/director who openly speaks about his fear of firearms, “The Purge” is meant to reflect our violence-obsessed news cycle through genre entertainment, and comment upon killing by presenting it more absurdly. That satire of gun nut extremism even becomes marketing with posters featuring American flags made of weapons (“The Purge: Anarchy”) or using the winking tagline “Keep America Great" (this past weekend's "The Purge: Election Year"). Frustratingly, the films themselves prove to be thoroughly hypocritical about gun ownership and a violent, desensitized America, with the two issues providing the series’ bloody bread and butter. 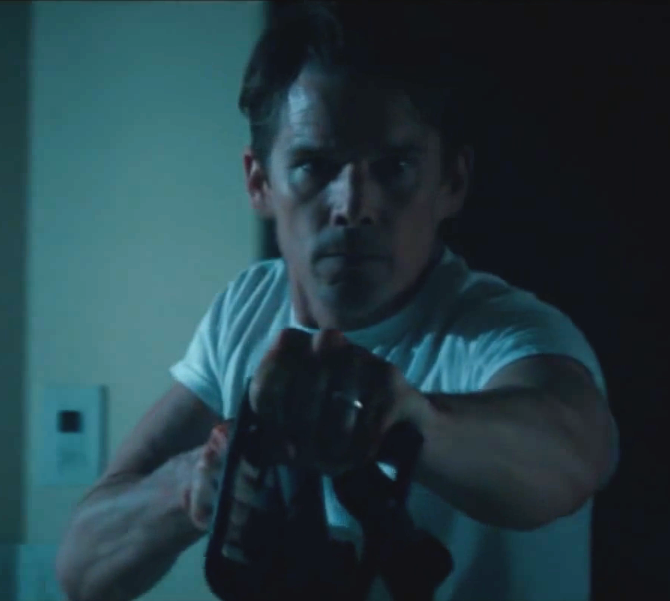 DeMonaco’s franchise hasn’t always been so misguided. The peak sequence of the series (so far) is in the opening credits to 2013’s “The Purge,” which presented savage violence from previous purge nights in surveillance footage, accompanied by a striking inclusion of Debussy’s greatest hit “Clair de Lune.” It’s a moment that captures what DeMonaco was initially horrified by—that violence is a widespread tragedy in a nation that adores weapons as a means of protection, and that answers to fear with hatred, not compassion. As a family tries to protect themselves in their home throughout this film, the dystopia of “The Purge” is vivid, showing that the holiday does not work for the greater good of society, despite statistics being shared in voiceover about crime being lowered, or that scientists agree that purging is healthy.

Even by the second half of the first movie, DeMonaco’s entire intent falls apart, as his overriding interest to make “a thrill ride” leads to speaking in a dull slasher film language. Campy villains with masks become the face of a human being’s decision to kill, and violence is presented in slow motion with gushy money-shots, like Michael Haneke’s home invasion story “Funny Games” but American-ized with more shotgun blasts. When I attended a preview screening of the first film, a dissonance had already started; Ethan Hawke’s face was traumatized after killing numerous purgers inside his home, but the audience accompanied his reaction with uproarious applause, having been wound up by DeMonaco’s beats to expect the melee they were just rewarded. By the film’s conclusion, violence is recognized foremost as an outlet for cool kills, and guns an instrument for action that the film relies upon as much as the characters. 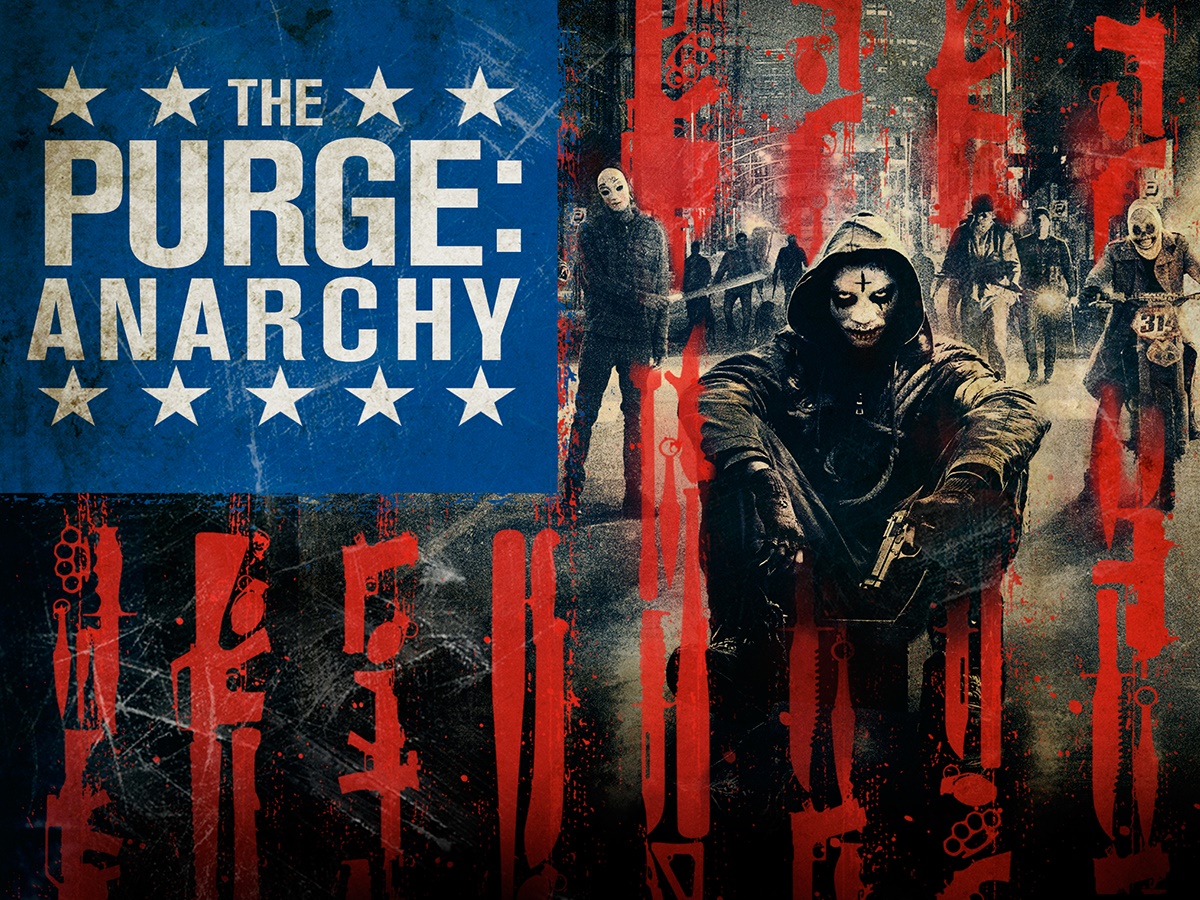 This disturbing dissonance between initial intent and execution by no means hindered “The Purge’”s success, with two sequels and a Universal Studios Fright Night attraction proving that the satire of his concept isn’t what turned DeMonaco’s idea into a franchise. It is bad enough that the idea of “The Purge” is engineered to advocate why people must have firearms in their house—because if this dystopia isn’t that far off, then no security system will protect us. Yet if we’re afraid of fellow Americans that want to be cowboys—clinging to their weapons in public and eager to become a hero—“Anarchy” and “Election Year” fulfill their fantasies of a new Wild West with lawless groups of armed wackos (nudging towards the pithy mental illness argument that guns don’t purge people, people purge people); “Anarchy” also introduced a lead character who DeMonaco says himself was based on Clint Eastwood’s title gunslinger in “The Outlaw Josey Wales.” For whatever intention DeMonaco originally had with avenging, strapped-up killer Leo Barnes, the character’s lead status helps fortify the franchise’s hypocritical normalization of gun ownership, making the gun the vital sidekick of any purge.

2014’s “The Purge: Anarchy” and 2016’s “The Purge: Election Year” provide a wider scope of terror, while further desensitizing the franchise’s purpose in favor of an amusement park-friendly presentation of chaos. Lives mean less and less. “Anarchy” takes shape as a pro-gun narrative about Barnes saving the lives of others (a mother and daughter and a divorcing husband and wife) by showing them the value of the weapon—they’re people who do not want to purge, as this franchise always takes the moral high-ground with its holiday, but embrace weapons as necessary protection. In the end, everyone has a gun, the commentary not speaking to the horror of everyone needing one, but its satisfying relief that they do. 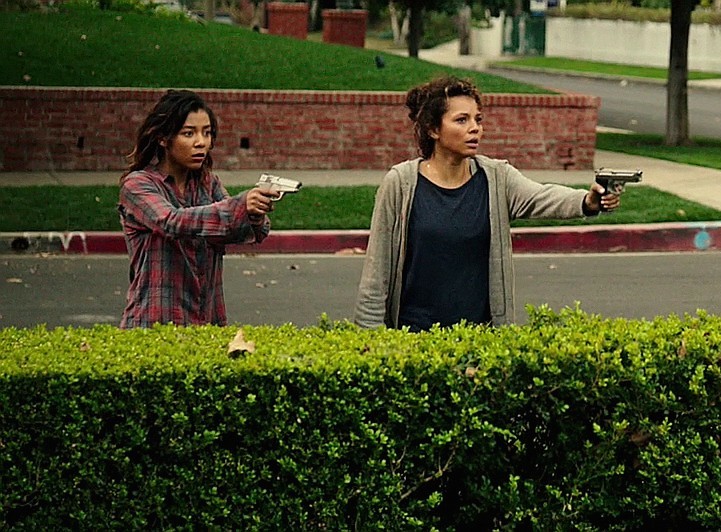 Though the NRA are called out with dinky cheap-shots in voiceovers that comment on how gun sales profit from purging, the films have a bizarre repression when it comes to firearms. In one of DeMonaco’s largest failures for a political statement, the anti-Purge rebellion leader in “Anarchy” played by Michael K. Williams directly says to the camera that “We worship at the altar of Smith & Wesson,” but then reasons that the solution is to “take up arms,” which leads to one of “Anarchy”’s many O.K. Corral shootouts. The end credits of “Anarchy” then prominently features documentary footage of guns at firing ranges, which along with weapons that are called out by name in the film (Mauser Elite SSX Double Barrel, and an "MP-9 silver-tipped Auto Magnum") might as well be an endorsement. “Election Year,” in turn, doesn’t even feign commentary as its narrative follows characters trying to protect a senator who wants to end the purge; everyone is merely armed from the beginning and ready to protect or assume heroism.

Never one to refuse a close-up of a body exploding from bullets, the franchise savors how loud guns and heightened violence combine to make good guy vs. bad guy set-pieces, which create straight-forward, crowd-pleasing climaxes. A highlight for my screening audience of “Election Year” was one continual take, which showed one character walking out of a truck and over to a woman she had just run over, then shooting her point blank in the face with a shotgun; the audience roared with approval, and DeMonaco continued to prove nothing with his cheap pulp franchise but a symbiotic bloodlust. It’s a hypocritical sensation matched by other franchise moments of bullet-riddled bodies being ripped up in slow motion in war-like sequences, a common visual coda for DeMonaco’s prominently gratuitous filmmaking. 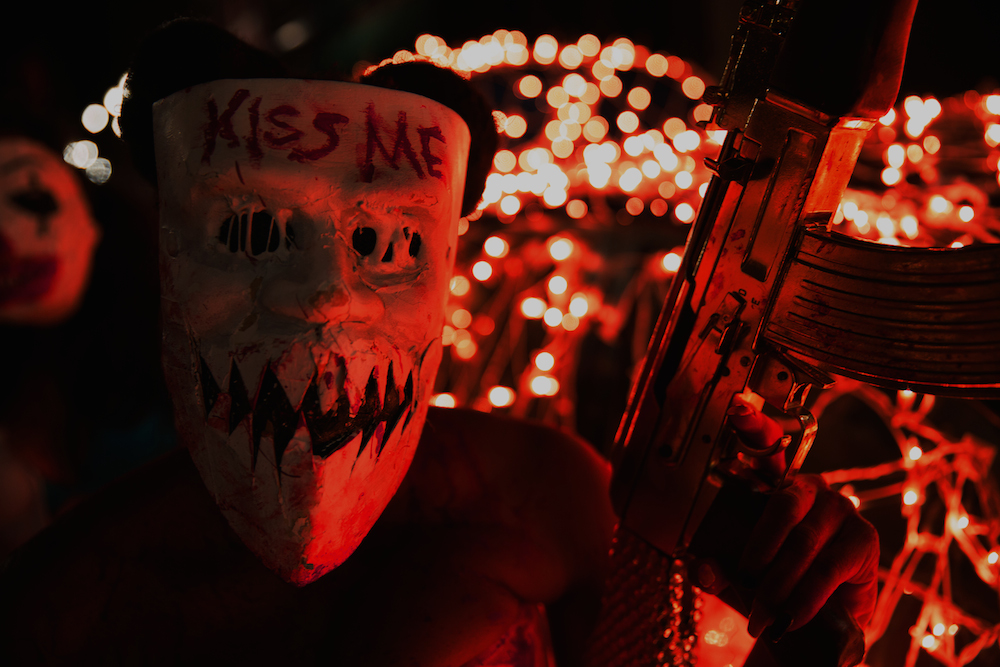 “Anarchy” features a revealing passage in which a psychotic purger boasts that she is the virus of violence incarnate, recalling how Steve James’ 2011 documentary “The Interrupters” diagnosed daily violence as a disease. The fascinating, frightening psychology about what makes a human able to kill is the least of the franchise’s priorities, despite the series’ desire for subversive relevance in an era of daily mass shootings among other headline-topping acts of violence. Through its fleeting acts of horror carnage and action movie shootouts, “The Purge” films desensitize instead of heightening awareness of the complicated motivations behind violence. It presents a human story of revenge in Barnes’ arc (who, in “Anarchy,” initially wants to purge the man who killed his son in an accident) but shrugs off the immediate issues about why people would embrace killing, reducing a complicated phenomenon to what a throwaway character in “Election Year” calls “Halloween for adults.” “The Purge” recognizes that America is sick with boiling aggression and hatred for the other, but it sorely lacks the narrative imagination, let alone audaciousness, to challenge its viewers.

DeMonaco’s idea of satire is defined by a thoroughly juvenile perspective. Along with wagging its middle finger at easy, generic targets like stuffy white male politicians and religious extremism, “The Purge”’s witless presentation of guns and violence doesn’t have an ideological eloquence beyond the notion of “everything is totally fucked, dude.” While audiences proceed to show an interest in DeMonaco’s spoof of our national bloodlust ($30.8 million this past weekend, guaranteeing a third sequel), the franchise continues to be complicit in toxic American fantasies of harming others.