"Why I cried through the fight scenes in 'Wonder Woman'": According to Meredith Woerner of The LA Times.

“I felt like I was discovering something I didn’t even know I had always wanted. A need that I had boxed up and buried deep after three movies of Iron Man punching bad guys in the face, three more movies of Captain America punching bad guys in the face, a movie about Superman and Batman punching each other in the face and then ‘Suicide Squad.’ Witnessing a woman hold the field, and the camera, for that long blew open an arguably monotonous genre. We didn’t need a computer-generated tree or a sassy raccoon to change the superhero game; what we needed was a woman. ‘Wonder Woman’ director Patty Jenkins wasn’t too surprised when I described my tearful reaction. ‘I’ve heard that a lot,’ she said. And sure enough, as ‘Wonder Woman’ blazed through its opening weekend, the Internet was flooded with tales of tears. ‘Wept through every fight scene in Wonder Woman AMA,’ tweeted Shani O. Hilton (head of U.S. news for BuzzFeed News). ‘I just thought about the No Man's Land sequence & started crying again,’ writer and director Julia Hart said online.” 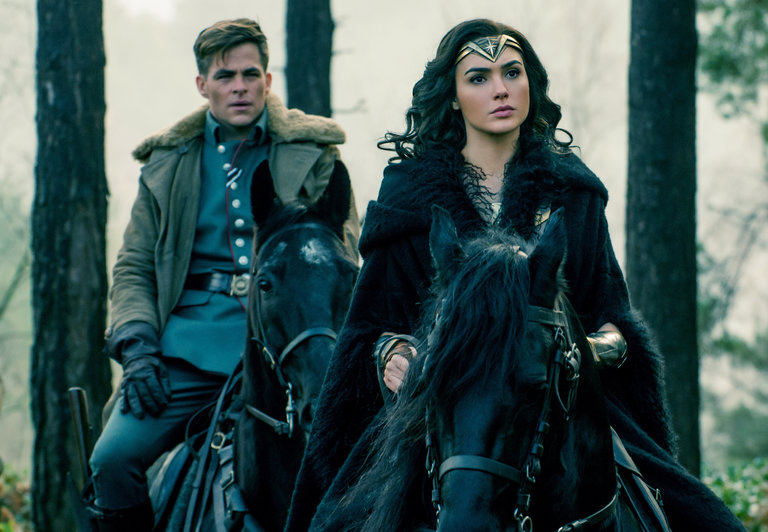 "Behind Wonder Woman Is a Great Man": Excellent commentary from Anna North at The New York Times.

“Much of the credit for the character’s charm goes to Chris Pine, who knows how to project confidence even as he’s stepping out of the spotlight. Diana’s mother Hippolyta explains at the beginning of the film that humans were originally created to be ‘strong and passionate,’ and Captain Trevor is both, and when it matters, he can use those qualities to support someone else. Especially in his (very tame) nude scene, Mr. Pine is working in a mode previously explored by Chris Hemsworth in ‘Ghostbusters’ and Channing Tatum in pretty much everything — the preternaturally attractive man who wears his beauty lightly, who is both willing to be objectified and to make a joke of his objectification. A white, muscular man on the big screen isn’t exactly boundary-breaking, but even the acknowledgement that male bodies can be beautiful sometimes feels subversive, and an actor who’s willing to take a playful and self-aware attitude toward his own sexiness is a welcome break from a culture that frequently lays the heavy burden of hotness exclusively on women. Misogynists have long accused feminists of hating men or masculinity, but Captain Trevor is a reminder that masculinity itself isn’t the problem. A swashbuckling spy who amusingly claims his physique is ‘above average,’ he remains masculine throughout the movie in a fairly traditional sense — his masculinity just allows for supporting a powerful (O.K., superpowerful) woman, rather than undercutting or resenting her.” 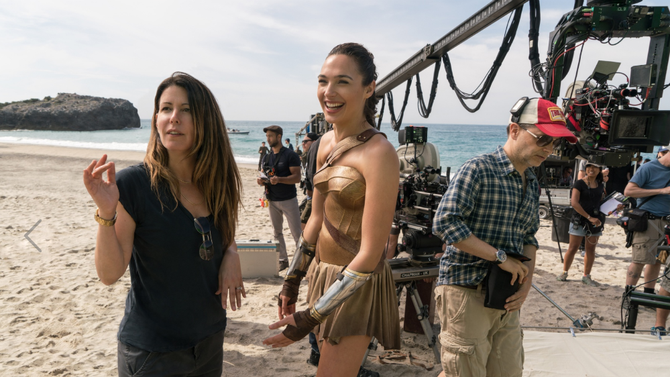 “In the end, Jenkins got results. In an interview with Collider, the director said she has no deleted scenes to add as bonus content for the ‘Wonder Woman’ DVD because they don’t exist — the movie that’s in theaters is the movie she wanted to make. That’s more than can be said for ‘Suicide Squad.’ She also knew the movie had to appeal to young girls, who would inevitably see the film. That wasn’t just a creative decision, but a business one as well. When ‘Suicide Squad’ was released, Goldstein told Variety, ‘We’re resonating with a younger audience. The younger the audience, the higher the [Cinema]Score.’ And then there’s that tone. ‘The thing I think is so important to always keep in mind about her is how positive and bright and shiny she is,’ Jenkins told Rolling Stone.Andrew Barker hit on a lot of this in his review for Variety: ‘It says quite a lot about the general tenor of the DC cinematic universe that a film set in the trenches of WWI, with a plot revolving around the development of chemical warfare, is nonetheless its most cheerful and kid-friendly entry,’ he wrote.For Warner Bros. and the DCEU, ‘Wonder Woman’ represents a shift in tone that might set a precedent for the films to come. Although he emphasized that each movie is treated as an individual entity, and each director is privy to their own style, Goldstein acknowledged the crucial timing of ‘Wonder Woman’’s success across the board.” 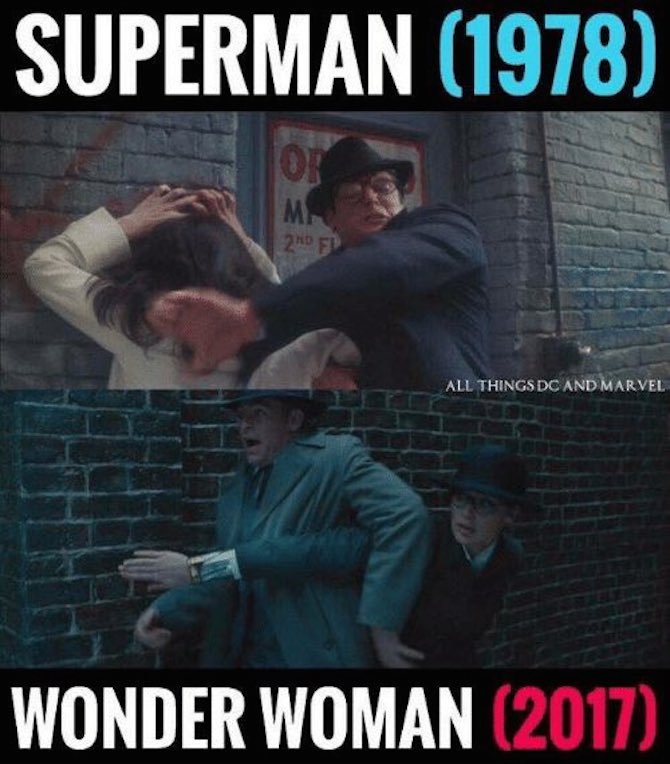 "Did You Catch the 1978 'Superman' Tributes in 'Wonder Woman'?": Asks TheWrap's Umberto Gonzalez.

“1978’s ‘Superman: The Movie’ was the first blockbuster to prove a superhero film could be a drama with human stakes — and Patty Jenkins’ ‘Wonder Woman’ is filled with loving allusions to the 1978 Christopher Reeve super-classic. Insiders tell TheWrap that Jenkins and DC Films President and Chief Content Officer Geoff Johns love the Richard Donner film and bonded over it. It shows. The homages begin when Wonder Woman, aka Diana Prince (Gal Gadot) arrives in London and goes shopping with Chris Pine’s Steve Trevor and Lucy Davis’ Etta Candy for clothes more modest than her warrior gear. When Steve gives Diana glasses as a disguise, Etta notes that they can’t distract from her beauty. (Just as Clark Kent’s glasses could never convincingly hide the Man of Steel’s handsome features.) Gadot dresses in a dark coat and hat with some similarities to the ones Reeve wears as Clark in ‘Superman.’ And then leaves the department store through a revolving door. In ‘Superman,’ Clark has trouble passing through another revolving door. (He often feigns clumsiness so no one will guess his super powers.) In ‘Wonder Woman,’ Diana has her own trouble passing through the revolving door — because she’s carrying her Godkiller sword and shield.” 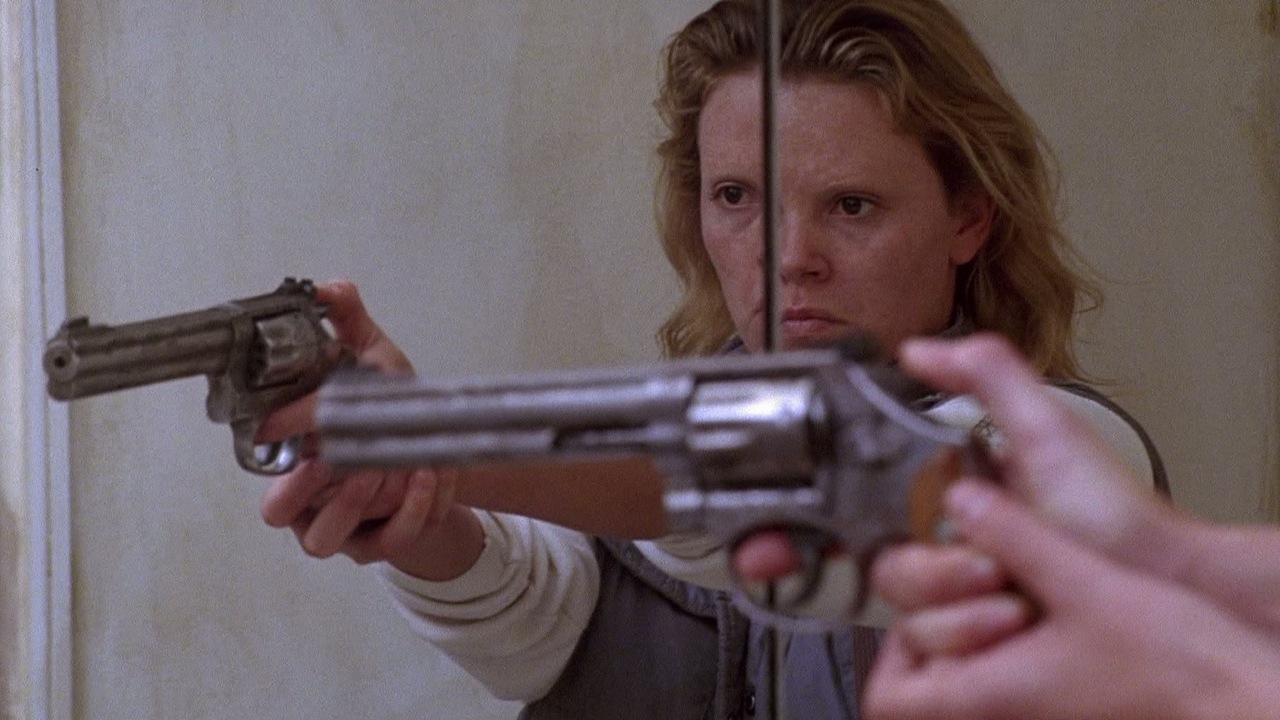 “Aileen is the protector and provider, proudly bringing home the bacon -- and the keys to cars that Selby doesn't ask too many questions about. Does she know that Aileen has started to murder her clients? She does and doesn't. Aileen's murder spree becomes big news long before Selby focuses on it. The crimes themselves are triggered by Aileen's loathing for prostitution -- by a lifetime's hatred for the way men have treated her since she was a child. She has only one male friend, a shattered Vietnam veteran and fellow drunk (Bruce Dern). Although she kills for the first time in self-defense, she is also lashing out against her past. Her experience of love with Selby brings revulsion uncoiling from her memories; men treat her in a cruel way and pay for their sins and those of all who went before them. The most heartbreaking scene is the death of a good man (Scott Wilson) who actually wants to help her, but has arrived so late in her life that the only way he can help is to be eliminated as a witness. Aileen's body language is frightening and fascinating. She doesn't know how to occupy her body. Watch Theron as she goes through a repertory of little arm straightenings and body adjustments and head tosses and hair touchings, as she nervously tries to shake out her nervousness and look at ease. Observe her smoking technique; she handles her cigarettes with the self-conscious bravado of a 13-year-old trying to impress a kid. And note that there is only one moment in the movie where she seems relaxed and at peace with herself; you will know the scene, and it will explain itself. This is one of the greatest performances in the history of the cinema.” 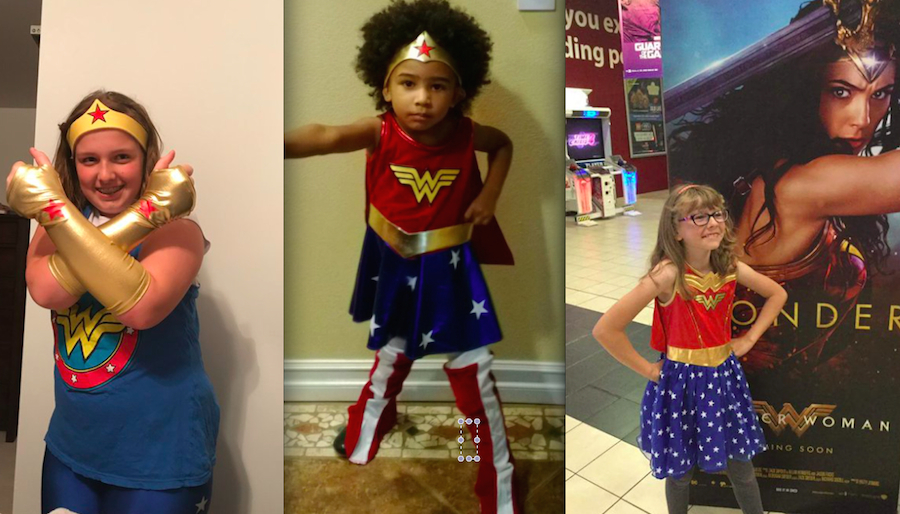 Patty Jenkins was moved to tears by these images of "young girls around the country" dressing up as Wonder Woman, compiled by Ryan Parker at The Hollywood Reporter.