"The Interview: Olivia de Havilland": John Meroney of Garden & Gun interviews the 99-year-old screen legend about starring in the 1939 landmark, "Gone With the Wind."

“You’ve worked with such legendary directors as William Wyler, John Huston, and, on ‘Gone with the Wind,’ Victor Fleming, who replaced George Cukor. Who got the best performance out of you? [De Havilland:] ‘They didn’t get the performances out of me. I gave the performances to them.’ How did Fleming help you play Melanie? [De Havilland: ‘Vivien Leigh and I were deeply attached to George and secretly sought his help all during the filming. But Victor really was the right director for this epic. The first time we worked together was when we filmed the scene where Melanie, engaged to Ashley and therefore the future mistress of Twelve Oaks, greets Scarlett. We rehearsed and I was warm, pleasant, and polite. He drew me aside and very gently observed, ‘Every word that Melanie says, she means.’ That direction was an invaluable key to her character, and it served me throughout the film. Victor, with all his virility, was sensitive and insightful.’” 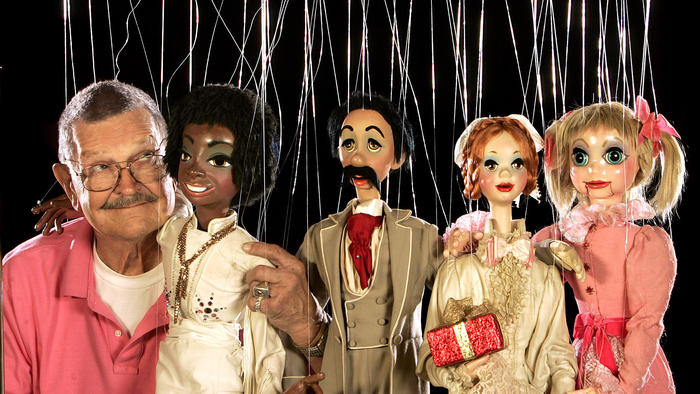 “Black’s theater, which occupies a former cinder block movie scenery shop west of downtown Los Angeles, is the oldest puppet theater in the United States. When it was opened in 1962 at the corner of 1st Street and Glendale Boulevard by Baker and business partner Alton Wood, it was an immediate hit with children and their parents. Thirteen years earlier, Baker and Wood had teamed up to form a touring company that kept busy staging puppet shows at school fairs, women's clubs and churches. They also had a thriving side business at a small Santa Monica Boulevard workshop where they designed and built puppets for movies and commercials and produced toy Pinocchio puppets sold at Disneyland. The workshop created promotional windows for Disneyland and animated displays for Knott's Berry Farm. Its puppets appeared in commercials for Bob's Big Boy, McDonald's and Burger King as well as in ads for new cars, drug stores and a cigarette maker. Over the years Baker enjoyed recounting how he had worked as an animation advisor with Disney Studios and walked through Disneyland with Walt Disney at his side the day before the park opened for business in 1955. He also reminisced about birthday parties where he performed his puppetry magic for the children of such Hollywood celebrities as Eleanor Powell, Jack Benny and Danny Kaye. He was proud that his puppets had roles in ‘A Star Is Born,’ ‘Star Trek,’ Elvis Presley's ‘G.I. Blues,’ Disney's ‘Bedknobs and Broomsticks’ and ‘Close Encounters of the Third Kind.’” 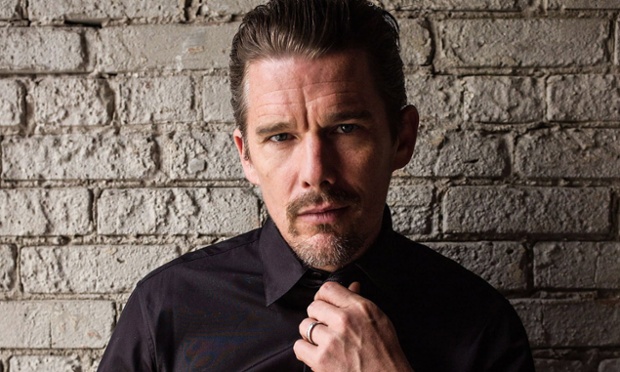 "Ethan Hawke: 'Mining your life is the only way to stumble on anything real'": The star of "Boyhood" chats with Alex Godfrey of The Guardian.

“Now 44, he shows no sign of an ego during our hour-long conversation and is constantly reflective. His latest project is ‘Born To Be Blue,’ a drama about jazz trumpeter Chet Baker. It’s set in 1969, when Baker was 40, ravaged by drugs, and had lost the ability to play after having most of his teeth punched out. The film centres on the one restorative element of Baker’s life at the time, his relationship with girlfriend Diane Vavra. ‘It’s extremely bittersweet because it’s the last period he was ever sober,’ says Hawke. ‘He temporarily could have salvaged some part of his life. But no sooner did he learn to play again than he took on all the same habits.’ Personal experiences have drawn Hawke to the story. ‘He was just a really beautiful, soulful person who wasn’t in control of his habit,’ he says of Baker. ‘And for me, personally... I’ve lost two of the great heroes of my life to heroin. Philip Seymour Hoffman [with whom he acted in ‘Before The Devil Knows You’re Dead’] and River Phoenix [co-star of Hawke’s debut film ‘Explorers’] are two of the greatest actors of my generation. It’s very rare that you really would think of an actor as an artist, but River, even though he lived such a short period of time... he was a poet, you know. He was the real thing. And so was Phil. Both of these guys were real inspirations to me, and it’s really sad... I’m just trying to understand all that.’” 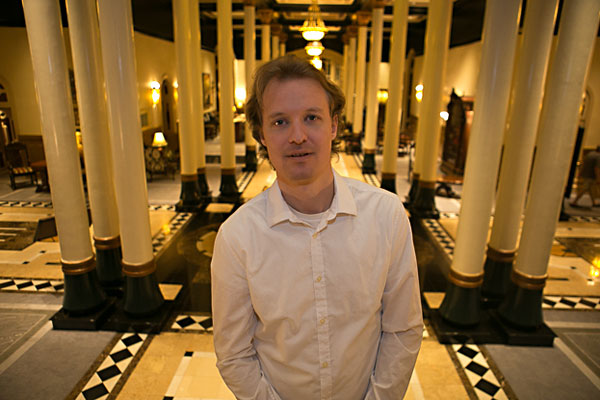 “Fitzgerald describes ‘The Homesman’ as’ a kind of reverse manifest destiny road trip.’ It follows a frontier woman (Swank) and a ‘rapscallion’ (Jones) who team up to carry a wagonload of three women deemed insane from the Nebraska frontier back east to Iowa, where they can receive proper medical care. The screenplay, which Fitzgerald wrote along with Jones and Wesley Oliver, is based on a novel by Glendon Swarthout. ‘From the outset, the going mantra in our mini writing room was that we were essentially unpacking the absurd idea of westward expansion,’ he says, gazing out over the Driskill's cowhide upholstery and Western-inspired wall hangings. ‘We inflicted so much suffering, both upon the people we were slaughtering along the way and upon ourselves. In particular, the trials and tribulations of women go almost completely un-talked about in cinematic language.’” 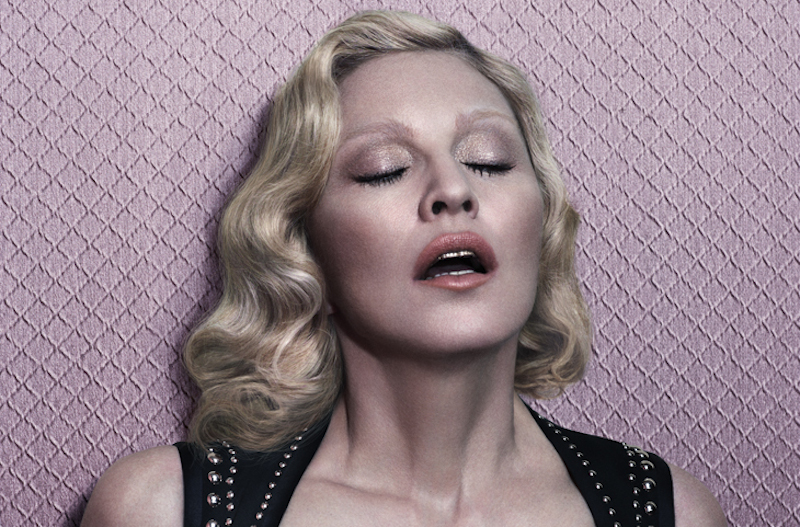 "Madonna": Magician David Blaine in conversation with the pop phenomenon at Interview Magazine.

“[Blaine:] ‘You knew lots of incredible artists in your early New York days. What artists today do you hope will inspire your children?’ [Madonna:] ‘Well, all those artists are dead.’ [Blaine:] ‘Artists that are alive, that you know—who do you hope will inspire the children of the future?’ [Madonna:]  ‘I like Banksy. I think he's inspiring and he speaks to what's going on in the world, socially. I like JR. Like [Jean-Michel] Basquiat and Keith Haring, who both started off as graffiti artists—their art is on the street, available for anyone to see. It's not elitist. You can see Banksy's work driving by it on the street, and JR's work—the way he takes photographs of people and turns them into heroes in their communities and makes people proud of who they are. My son is interning with JR right now and that's a great education for him.’ [Blaine:] ‘In the cards, there's a question directly from JR. But you're not going to get it now. I should have forced you in that direction. But okay, it's fine.’ [Madonna:] [laughs] ‘You're the most neurotic person who's ever interviewed me, by the way.’” 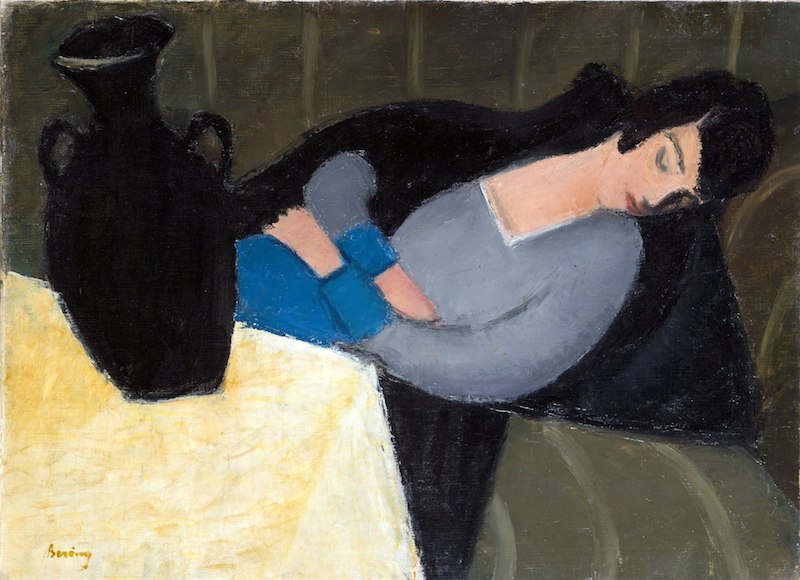 The Dissolve's Charles Bramesco reports on the discovery of a long-lost painting, Róbert Berény’s "Sleeping Lady with Black Vase," in the background of the 1999 kid flick, "Stuart Little."