The biggest taboo in American cinema may be the direct-to-video (DTV) market. Director John Hyams was dropped by his agent after making the DTV "Universal Soldier: Regeneration." Fellow director Isaac Florentine has said "I discovered that being a straight to DVD director is…worse than saying you have malaria."

To some extent, one can understand why DTV films have such a bad reputation: just watch the SyFy channel on Saturday night, or Cinemax at 2 am any night. Yet there's a certain freedom in making genre films without the budget to use extravagant CGI effects, and Hyams and Florentine have put it to good use. Over the past few years, a handful of critics, like ex-con Steven-Seagal-expert Vern and RogerEbert.com contributor Ignatiy Vishnevetsky, have championed their work. As the concept of vulgar auteurism has become a hot topic among the cinephile blogopshere recently, something's gotten lost in all the debate about whether Michael Bay and Tony Scott should be taken seriously. At heart, what seems worthwhile to me about vulgar auteurism is its championing of the best DTV genre films. Most 1950s intellectuals would have been horrified by the notion of taking Edgar G. Ulmer's "Detour" or Sam Fuller's "The Steel Helmet" seriously, and today they're considered essential.

Isaac Florentine's "Undisputed III: Redemption" (2010) suffers from a surface cheesiness that manifests itself in several ways. The most obvious is the fact that the cast seems to have been assembled as much for its fighting ability as its acting talent. However, that turns out to be a strength in the end. Vin Diesel, pumped-up muscles and all, is no longer so convincing as a tough guy. Scott Adkins, who has teamed up with Florentine six times, is thoroughly believable as a man who's spent years in jail, and the rest of the actors who play prisoners look equally rough. Adkins plays Boyka, a Russian boxer forced to compete in a contest where eight prisoners fight each other for the amusement of depraved gamblers and jailers; the winner supposedly gets his freedom. 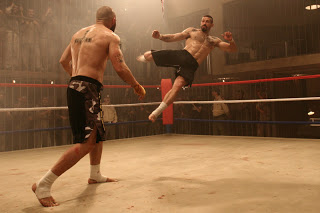 "Ninja "(2009) is the other consensus favorite in Florentine's filmography. While less reliant on long takes than "Undisputed III: Redemption"—apart from one breathtaking swordfight caught in a single take—it also uses zooms heavily and conveys a sense of the actors' genuine athleticism. However, it ventures further into fantasyland. Casey (Adkins) is an American raised at a Japanese martial arts dojo and sent to New York to safeguard a cache of weapons from a rogue assassin. The film is marked by an enjoyable goofiness, expressed through subplots like the one involving secret cult rituals staged by a huge corporation. John Woo seems to be a prime influence: the action mixes guns, swords and the body itself. There's a dubious Orientalism around the whole project: While it gives lots of screen time to Asians and creates a Japanese villain who turns out to be more charismatic than Casey, its story ultimately depends on Casey rescuing the Japanese from themselves. Also, his Japanese girlfriend is basically an object to be rescued. (That's a common trope in DTV films, unfortunately.) Despite these flaws, it's extremely entertaining, on a lighter note than "Undisputed III: Redemption", and the sequel will be Florentine's next film. 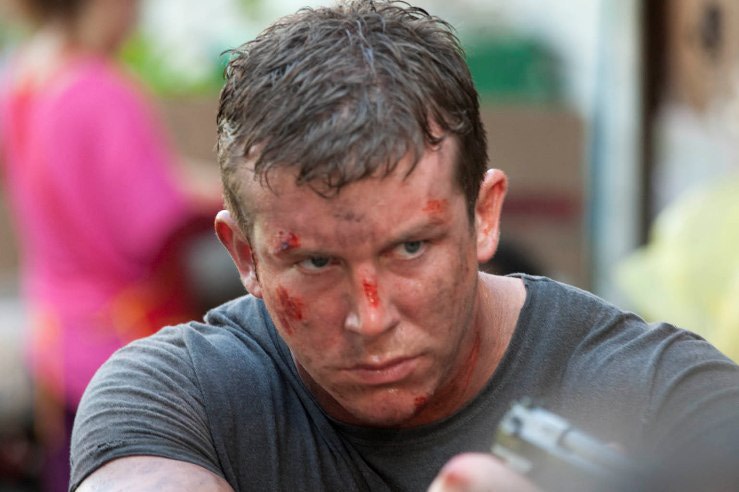 Dutch-born director Roel Reine has landed one film on Jack Lehtonen's "official" vulgar auteurist top 20 list: "The Marine 2" (2009). While I'm less enthusiastic about it than Lehtonen, "The Marine 2" shows the marks of a distinctive stylist. Reine only shoots close-ups when the narrative really requires him to. He prefers long shots, sometimes taken from a vast distance. He also seems to have more of a special effects budget than Florentine, as the film contains a number of CGI explosions. However, it suffers from a formulaic script that transplants the narrative of "Die Hard" to a tropical island and a protagonist—a Marine (wrestler Ted DiBiase) on vacation with his wife—who has all-American good looks going for him but suffers from an overriding blandness. The film has one astonishingly choreographed fight scene, shot in a 30-second take with a pirouetting camera. I'd love to see what Reine could do with a satisfying script.
Advertisement

Reine's latest film, "12 Rounds 2:  Reloaded" (2013), suggests a marked improvement in his work. This time around, he's working with a script by David Benullo that suggests the David Fincher of "Seven" and "The Game": paramedic Nick (wrestler Randy Orton) is called by a vigilante (Brian Markinson) and forced to play a bizarre round of games connected to an event in their pasts. Stylistically, it's less reliant on long shots than "The Marine 2," but doesn't shy away from them.

The nocturnal cinematography is quite beautiful at times. Despite the requisite ass-kicking, it feels more like a film noir than an action movie: The narrative turns out to be surprisingly complex and willing to shift focus from character to character. This impression is enhanced by Reine's tendency to film light streaming through venetian blinds. The movie concentrates on the plot with admirable economy and breakneck pacing. It only spends a few scenes setting up Nick's home life, and as soon as the game is over, the story ends, too. Without endorsing vigilantism, "12 Rounds 2: Reloaded" understands populist anger at a two-tiered justice system that tends to spare the privileged. The film's only major flaw is a stiff performance from Orton, who's called upon to do more than just fight.

John Hyams' reputation rests on his two "Universal Soldier" sequels: "Regeneration" (2009) and "Day of Reckoning" (2012). In "Regeneration," a terrorist with an android "universal soldier" (Andrei "The Pit Bull" Arlovski) has seized a nuclear reactor in Chernobyl. Luc (Jean-Claude van Damme), a decommissioned universal soldier, is sent to stop him, but once there, he discovers that he must fight Andrew (Dolph Lundgren), another soldier. The two face off in an epic fight that lasts about fifteen minutes. 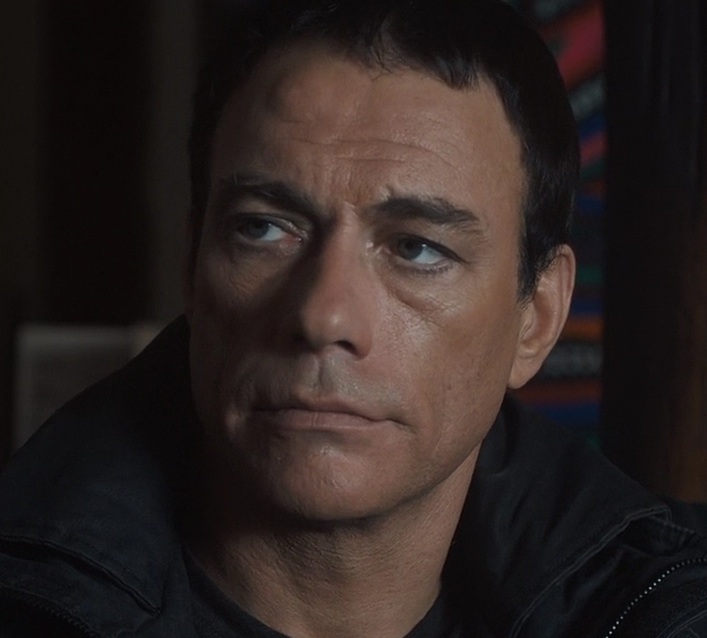 "Regeneration" plays with fantasies of invulnerability, only to constantly remind us of aging and bodily decay. By casting middle-aged actors with lined faces—and, in van Damme's case, a perpetually depressed expression—it undercuts the notion of unstoppable force. Luc never indulges in one-liners à la Schwarzenegger. When he prepares for battle, he doesn't become a cool badass, but a machine that must be constantly tuned up with booster shots. (The title of Hyams' documentary "The Smashing Machine
Advertisement
," about boxer Mark Karr, seems relevant here.) I'm not sure where the film was shot, but one can practically smell the odor of industrial decay. Cinematographer Peter Hyams, the director's father and an accomplished director in his own right, livens up the film, particularly its fight scenes, with an array of blue, red, gray and gold filters. Rarely does "Regeneration" look naturalistic—it creates its own world, with a distinctive and unique feel. Like Florentine, Hyams avoids CGI, apart from blood-splatter effects.

"Universal Soldier: Day of Reckoning" brings back van Damme, Lundgren and Arlovski, and introduces Scott Adkins to the "Universal Soldier" world, yet it feels very different from "Regeneration". It begins with the murder of John's (Adkins) wife and daughter by a group of thugs led by Luc. He falls into a coma and wakes up after nine months, but he seems to be suffering from mental problems. "Day of Reckoning" shows off Hyams' cinephilia, drawing first-person camerawork from Gaspar Noe's "Enter the Void," ominous walks down corridors from Stanley Kubrick's "The Shining" and a boat trip down a swamp from Francis Ford Coppola's "Apocalypse Now." It's slightly less stylized than "Regeneration"; shot in Baton Rouge, its images sometimes resemble the real world, but that only makes John's psychological collapse more disturbing. Dozens of sci-fi films have drawn from Philip K. Dick's novels over the past thirty years; "Day of Reckoning" is one of the few to get his sense that everyday life could turn into a hallucination at any moment. 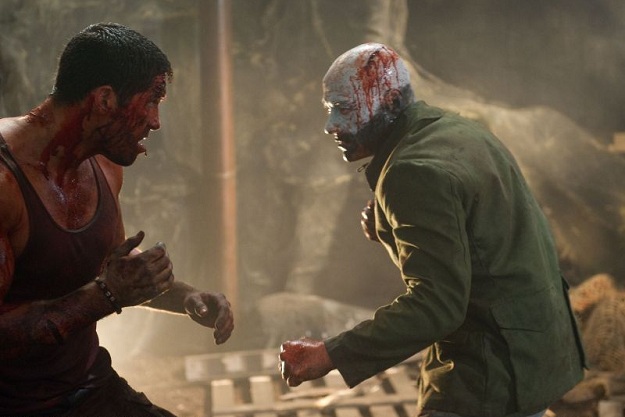 "Day of Reckoning" relies on the notion of living and dealing with implanted memories for its emotional charge. But what is cinema if not the art of implanting false memories? The film's DVD box features two separate quotes touting its brutal nature, and it is indeed startlingly violent. (Hyams himself describes the NC-17 cut as an endurance test.) Yet there's more to the violence than meets the eye. In an interview with Sara Freeman for the website MUBI, Hyams shows that he's thought seriously about the ethics of depicting bloodshed. "Day of Reckoning" takes place in a world where life is spectacularly cheap due to the proliferation of clones. This technology allows it to bring back a character who died in "Regeneration." Its ending shows a man dying and immediately being replaced by his clone. Both in its treatment of violence and the theme of memory, "Day of Reckoning" evokes the visceral power of good fiction and its ultimate artificiality. It's not cynical: its final scenes affirm the force of emotion, even if separated from real life.
Advertisement

Hyams, Reine and Florentine's work seems at once part of a Hollywood tradition—their fight scenes look like Raoul Walsh or Allan Dwan compared to the chaotic blur of mega-budgeted blockbusters like "World War Z"—and hyper-modern. Beyond the genre tropes, they capture the physical and psychological pressures of the world we're living in. Florentine and Reine's films are less ambitious, but "Undisputed 3: Redemption" and "12 Rounds 2: Reloaded" evoke the same kind of weight as Hyams' "Universal Soldier" films. They may be working in the DTV ghetto—technically, "Day of Reckoning" played for one week in a New York theater last year—but they're describing the same world as a more prestigious filmmaker like Olivier Assayas. (Without making a big deal of it, Florentine uses casts drawn from all over the world.) I can't say that I've been impressed by the entire vulgar auteurist canon, but in the DTV arena, its critics have made some real discoveries.