"Detour" is a movie so filled with imperfections that it would not earn the director a passing grade in film school. This movie from Hollywood's poverty row, shot in six days, filled with technical errors and ham-handed narrative, starring a man who can only pout and a woman who can only sneer, should have faded from sight soon after it was released in 1945. And yet it lives on, haunting and creepy, an embodiment of the guilty soul of film noir. No one who has seen it has easily forgotten it.

"Detour" tells the story of Al Roberts, played by Tom Neal as a petulant loser with haunted eyes and a weak mouth, who plays piano in a nightclub and is in love, or says he is, with a singer named Sue. Their song, significantly, is "I Can't Believe You Fell in Love With Me.” He wants to get married, she leaves for the West Coast, he continues to play piano, but then: "When this drunk gave me a ten spot, I couldn't get very excited. What was it? A piece of paper crawling with germs.”

So he hitchhikes to California, getting a lift in Arizona from a man named Haskell, who tells him about a woman hitchhiker who left deep scratches on his hand: "There oughta be a law against dames with claws.” Haskell dies of a heart attack. Al buries the body, and takes Haskell's car, clothes, money and identification; he claims to have no choice, because the police will in any event assume he murdered the man.

He picks up a hitchhiker named Vera (Ann Savage), who “looked like she'd just been thrown off the crummiest freight train in the world.” She seems to doze, then sits bolt upright and makes a sudden verbal attack: “Where'd you leave his body? Where did you leave the owner of this car? Your name's not Haskell!” Al realizes he has picked up the dame with the claws.

Haskell had told them both the same unlikely story, about running away from home at 15 after putting a friend's eye out in a duel (“My dad had a couple of FrancoPrussian sabers”).

In Los Angeles, Vera reads that Haskell's rich father is dying, and dreams up a con for Al to impersonate the long-lost son and inherit the estate. Waiting for the old man to die, they sit in a rented room, drinking, playing cards and fighting, until Al finds himself with another corpse on his hands, once again in a situation that makes him look guilty of murder.

Roberts is played by Tom Neal as a sad sack who seems relieved to surrender to Vera (“My favorite sport is being kept prisoner”). Ann Savage plays Vera as a venomous castrator. Every line is acid and angry; in an era before four-letter words, she lashes Al with “sucker” and “sap.” Of course Al could simply escape from her. Sure, she has the key to the room, but any woman who kills a bottle of booze in a night can be dodged fairly easily. Al stays because he wants to stay. He wallows in mistreatment.

The movie was shot on the cheap with B-minus actors, but it was directed by a man of qualities: Edgar G. Ulmer (1900-1972), a refugee from Hitler, who was an assistant to the great Murnau on “The Last Laugh” and “Sunrise,” and provided one of the links between German Expressionism, with its exaggerated lighting, camera angles and dramaturgy, and the American film noir, which added jazz and guilt.

The difference between a crime film and a noir film is that the bad guys in crime movies know they're bad and want to be, while a noir hero thinks he's a good guy who has been ambushed by life. Al Roberts complains to us: “Whichever way you turn, fate sticks out a foot to trip you.” Most noir heroes are defeated through their weaknesses. Few have been weaker than Roberts. He narrates the movie by speaking directly to the audience, mostly in a self-pitying whine. He's pleading his case, complaining that life hasn't given him a fair break.

Most critics of “Detour” have taken Al's story at face value: He was unlucky in love, he lost the good girl and was savaged by the bad girl, he was an innocent bystander who looked guilty even to himself. But the critic Andrew Britton argues a more intriguing theory in Ian Cameron's Book of Film Noir. He emphasizes that the narration is addressed directly to us: We're not hearing what happened, but what Al Roberts wants us to believe happened. It's a “spurious but flattering account,” he writes, pointing out that Sue the singer hardly fits Al's description of her, that Al is less in love than in need of her paycheck, and that his cover-up of Haskell's death is a rationalization for an easy theft. For Britton, Al's version illustrates Freud's theory that traumatic experiences can be reworked into fantasies that are easier to live with.

Maybe that's why “Detour” insinuates itself so well--why audiences respond so strongly. The jumps and inconsistencies of the narrative are nightmare psychology; Al's not telling a story, but scurrying through the raw materials, assembling an alibi. Consider the sequence where Al buries Haskell's body and takes his identity. Immediately after, Al checks into a motel, goes to sleep, and dreams of the very same events: It's a flashback side-by-side with the events it flashes back to, as if his dream mind is doing a quick rewrite.

Tom Neal makes Al flaccid, passive and self-pitying. That's perfect for the material. (In real life, Neal was as unlucky as Al; he was convicted of manslaughter in the death of his third wife.) Ann Savage's work is extraordinary: There is not a single fleeting shred of tenderness or humanity in her performance as Vera, as she snaps out her pulp dialogue (“What'd you do--kiss him with a wrench?”). These are two pure types: the submissive man and the female hellion.

The movie's low budget is obvious. During one early scene, Ulmer uses thick fog to substitute for New York streets. He shoots as many scenes as possible in the front seats of cars, with shabby rear-projection (the only meal Al and Vera have together is in a drive-in). For a flashback, he simply zooms in on Neal's face, cuts the lights in the background, and shines a light in his eyes.

Sometimes you can see him stretching to make ends meet. When Al calls long-distance to Sue, for example, Ulmer pads his running time by editing in stock footage of telephone wires and switchboard operators, but can't spring for any footage of Sue actually speaking into the phone (Al does all the talking, and then Ulmer cuts to her lamely holding the receiver to her ear).

And it's strange that the first vehicles to give lifts to the hitchhiking Al seem to have right-hand drives. He gets in on what would be the American driver's side, and the cars drive off on the “wrong” side of the road. Was the movie shot in England? Not at all. My guess is that the negative was flipped. Ulmer possibly shot the scenes with the cars going from left to right, then reflected that for a journey from the east to the west coasts, right to left would be more conventional film grammar. Placing style above common sense is completely consistent with Ulmer's approach throughout the film.

Do these limitations and stylistic transgressions hurt the film? No. They are the film. “Detour” is an example of material finding the appropriate form. Two bottom-feeders from the swamps of pulp swim through the murk of low-budget noir and are caught gasping in Ulmer's net. They deserve one another. At the end, Al is still complaining: “Fate, for some mysterious force, can put the finger on you or me, for no good reason at all.” Oh, it has a reason. 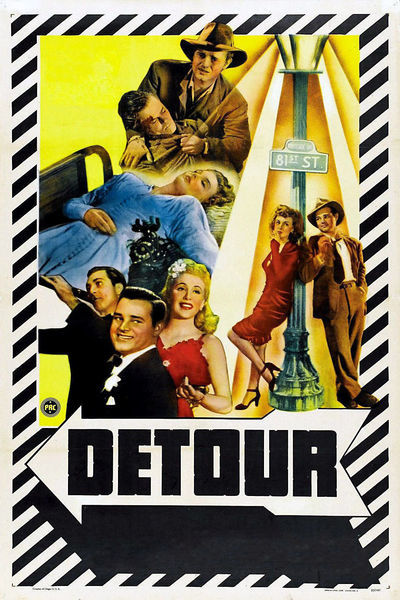 Rated NR not recommended for children