For fans of the masterful documentaries produced by Kartemquin Films over the last half-century, the #KTQ50 Birthday Party on June 24th was a virtual who’s who of nonfiction cinema. Numerous beloved subjects of films such as “Hoop Dreams,” “The Interrupters” and “Life Itself” hobnobbed with the acclaimed filmmakers that gave their stories immortality on the screen. Sharing in the celebration were Rep. Jan Schakowsky, Cook County State’s Attorney Kim Foxx, Cook County Board President Toni Preckwinkle and the CEO of PBS, Paula Kerger, as well as various representatives from the Sundance Institute, the International Documentary Association and Participant Media.

At the center of it all was Gordon Quinn, the co-founder, Artistic Director and “quin” of Kartemquin, who recently reflected on the legacy of his company in an interview with RogerEbert.com. He made his directorial debut in 1966 with “Home For Life,” a portrait of residents at a home for the aged, which Roger Ebert deemed “extraordinarily moving.” Kartemquin’s Board Chairman, Jason Stephens, likened the socioeconomic changes and generational shifts of 1966 with those occurring today.

One of the younger faces in the crowd, Garrett Miller, just began his internship at Kartemquin, and said that he was inspired by his teachers at Columbia College Chicago who had worked for the company. He said the films produced by Kartemquin were the kind of social issue documentaries he wanted to make, yet what appealed to him above all was the opportunity to be part of a community where no one is looked down upon. A longtime professor at Columbia, Dan Rybicky, co-directed the excellent Kartemquin film, “Almost There,” with Aaron Wickenden, and recently taught a class on the company at his college.

“There’s a relevance to Kartemquin films that astonished my whole class,” said Rybicky. “There are films from the late ’60s and early ’70s about women’s issues in which everything still felt so current. My students felt both inspired and depressed that the same issues have remained relevant even now.”

Also attesting to the unending relevance of Kartemquin classics was Pam Taylor, who was 10 years old when she appeared in 1974’s “Now We Live On Clifton,” an unforgettable look at the gentrification caused by the expansion of DePaul University in Lincoln Park. Though that particular neighborhood has changed quite a bit in the decades that followed, the issues that the film portrays remain ever-present in the Windy City.

“I work on the West Side now, so I have to drive through Humboldt Park constantly, and it’s very interesting to see how that neighborhood is being gentrified,” said Taylor. “One time, I had to stop and mail a letter, and when I opened the mailbox, I saw that someone had written, ‘F—k gentrification!’ It’s weird because you kind of want gentrification, but when you work on the other side of it, you still want there to be some other solution.” 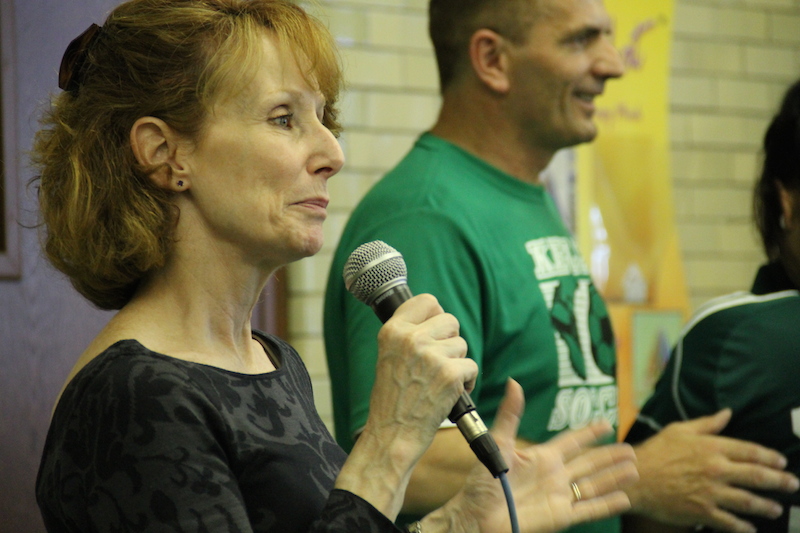 Last year’s “In the Game,” directed by Maria Finitzo, explored the lives of Hispanic girls on a soccer team at Kelly High School in Chicago. Quinn said that the film serves as a rebuke to offensive comments made by Governor Bruce Rauner, who referred to the city’s schools as “crumbling prisons.” Like so many Kartemquin titles, this film puts a human face on issues too often dismissed by those who don’t understand them.

“Everybody thinks the film is just about a community on the South Side of Chicago, but it’s really about what’s happening in America,” said Finitzo. “These young people are the future of our country, and if we don’t educate them, everyone will suffer. A couple months ago, I showed the film in Ashland, Oregon, and afterward a man came up me and said, ‘I’m the educational director for the migrant workers in the vineyards. Your film captures what is happening to their kids.’ So whether it’s Ashland, Oregon, or the South Side of Chicago, it’s all the same.”

News of the Brexit vote in England was weighing on the minds of many people in attendance, including Honorary Chair Chaz Ebert, who delivered an impassioned speech about the need for consciousness and togetherness during a time of unsettling change. Kartemquin’s determination to transcend the barriers of a segregated city like Chicago embodies the sort of spirit that can counteract the forces of fear engulfing much of the world today.

“I can’t believe that an organization started by a few intellectual hippies from the University of Chicago still exists 50 years later,” said Ebert. “The reason this organization still stands is because it has integrity, which is not a word that is used a lot in the film industry.”

Chaz said that she will never forget sitting in the movie theater next to her husband, Roger, when they watched “Hoop Dreams” for the first time in 1994. They had never seen anything like it, and Roger’s rave review played a crucial role in the film’s great success, which included an Oscar nomination for Best Editing (though it was criminally snubbed in the Documentary category). According to Quinn, the picture also served as a turning point for the company, motivating them to return to making the vérité work that characterized their early years. Both of the film’s subjects, William Gates and Arthur Agee, spoke at an exclusive Gala Dinner held prior to the party on the Harris Theater Rooftop later that evening.

“What came out of the experience of making the film was our relationship that we formed with the Kartemquin family,” said Gates. “What makes them so special is they don’t take advantage of their subjects.” 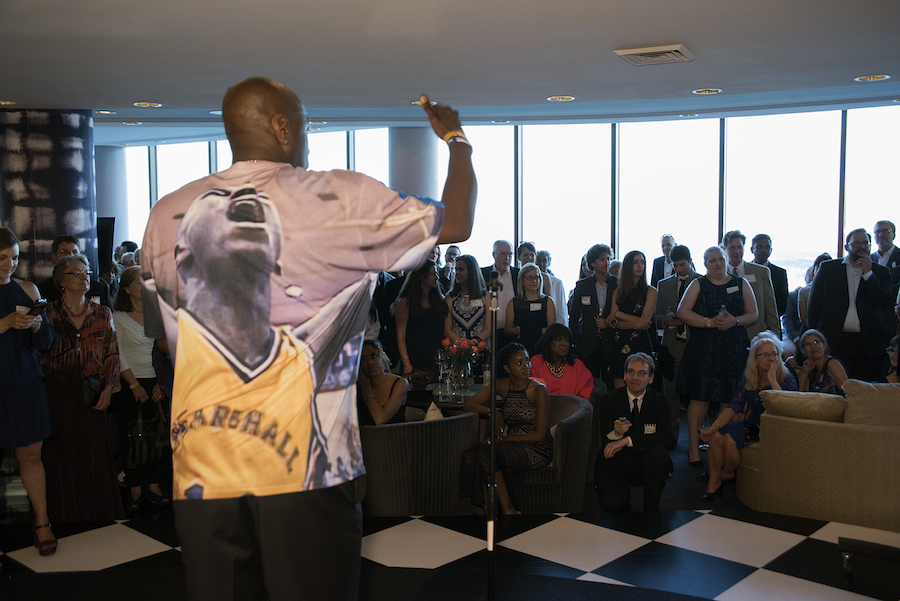 It was immensely powerful to see these men express their gratitude for how Kartemquin altered their lives by getting their story told. For Agee, the experience resulted in him obtaining a college basketball scholarship, preventing him from potentially becoming a gang or drug-related “statistic.”

“I never saw a Kartemquin film before three white guys—Fred Marx, Peter Gilbert and Steve James—walked into the West Side of Chicago,” said Agee. “That takes guts. They told me they were making a documentary, and I’m looking at them thinking, ‘You know you’re about ten minutes away from getting robbed right now?’”

Agee earned big laughs with this remark, as well as his story of watching “Hoop Dreams” with his eight-year-old son.

“I wanted to strangle him because he kept looking at William and saying, ‘Dad, did you see the shot he just made?’” quipped Agee in exasperation.

The film’s director, Steve James, shared a favorite story of his own that centered on William’s late brother, Curtis. He was working for FedEx at the time “Hoop Dreams” was released, and while doing his routine work of delivering packages and obtaining signatures, Curtis was recognized by a fan, who asked for his signature instead.

“So many of our films are about everyday people on the margins of society,” said James. “They don’t think of themselves as film subjects because they don’t get their voices heard very often. There’s nothing more remarkable for all of us as filmmakers than to be honored with capturing their lives, to observe their courage in opening their lives to us, and to have them share with us this incredible wisdom and insight into their lives and into the lives of people in this country. For that, we are eternally indebted to them.”

Thanks to upcoming retrospectives in New York and L.A. detailed by Executive Director Betsy Steinberg, the voices championed by Kartemquin will acquire “new levels of visibility.” She also previewed a fall festival of Kartemquin’s latest work slated for November, as well as announced that the company would begin giving small grants to projects at critical stages of production.

The late evening program included a sublime montage of Kartmequin’s films (kudos to editor Hillary Bachelder), as well as taped responses from filmmakers including Ken Burns, Andrew Davis, Alex Gibney, Heidi Ewing, Joanna Rudnick and Judd Apatow. At the end, all of the film subjects in attendance were encouraged to take a group photo onstage, followed subsequently by everyone who had ever worked on a Kartemquin film.

Khalilah Ali, the former wife of Muhammad Ali, spontaneously took to the mic and thanked Bill Siegel, director of 2013’s “The Trials of Muhammad Ali,” which she dubbed “the best documentary ever made in America.” Ameena Matthews, the heroic activist unforgettably featured in Steve James’ 2011 triumph, “The Interrupters,” was diagnosed with multiple myeloma, a rare blood cancer, in 2013, yet when she appeared onstage next to Ali and Ebert, she positively glowed.

“I would’ve never thought in a million years that I would be standing in front of you guys on the 24th of this month alive,” said Matthews. “Thank you for your prayers, your meditation and your continued support for helping save my life.”

It felt especially fitting that James concluded his speech by invoking the words of Roger Ebert, who allowed the filmmaker to chronicle the last months of his life in 2014’s “Life Itself.”

“Chaz’s husband once said very memorably that movies are a machine that generates empathy,” said James. “If there has ever been an organization and a film company whose mission was to generate empathy, it is Kartemquin.”