When filmmakers Dan Rybicky and Aaron Wickenden first enter the East Chicago home of Peter Anton, they are so overwhelmed by its rundown condition that they must return later with masks. Anton’s childhood home is a rapidly deteriorating domicile whose utilities have long since been shut off. Mold is a prevalent cohabitant, and a sign on the door warns visitors that the house is occupied and not condemned. The filmmakers are so concerned about the house collapsing that they insist Anton should seek shelter elsewhere. He refuses for a variety of reasons, not the least of which is because decades of his artwork exist inside.

In surveying this setting, one might think “Almost There” is a documentary about impoverished, elderly folks who have sadly fallen through the cracks in the system. Instead, it’s an uncomfortable journey through the later life of an artist, a warts-and-all look at the filmmakers’ process that fails to get past its most troublesome wart. Herein lies the problem for me as your humble reviewer, for the filmmakers have asked that we not discuss the major revelation in “Almost There," a revelation that colored my viewing experience to an irreconcilable degree. So I'll have to tap-dance around the elephant in the room. To be safe, I’ll issue a spoiler warning in case I’m not cryptic enough to keep viewers in the dark.

In 2006, Rybicky and Wickenden met Anton at a pierogi festival. His sketched portraits of festival attendees attracted the duo’s attention, but a scrapbook of Anton’s work pulled them into his orbit. Entitled “Almost There,” the scrapbook is part of a 12-book autobiography and is filled with sketches, sayings and other minutiae that Anton sought to include. On page 657 of the “Almost There” series, Anton wrote “one of the final goals of my life is to tell my story. It may be left to others to do so.” In 2008, Rybicky and Wickenden became Anton’s co-conspirators in relaying his story to the general public.

Rybicky and Wickenden travel to Anton’s home in East Chicago, Indiana to see more of his work. “East Chicago is the type of place you’d drive pass, but never into,” we’re told. Images of East Chicago’s poverty accompany this narration, but fail to prepare us for the state of Anton’s house. Anton’s rationale for staying is understandable despite the filmmakers’ concern for his safety: he is very big on the notion of “home”, and this building has defined it for over 50 years. Additionally, he has a small group of friends who look in on him, and they've remained with him through extremely tough times. We meet some of these people as “Almost There” progresses, and we also learn why they stay by Anton’s side despite his irascible, sometimes confrontational personality. We also gradually start to see parallels between the lives of the filmmakers and Anton.

Anton’s tour of his decades of artwork inspires the documentarians to look into exhibiting several pieces at the Intuit Center. Intuit specializes in “outsider art," a sub-genre that focuses on art done by those outside the cultural mainstream. “Most of the people whose art we exhibit are dead,” says Cleo Wilson, Intuit’s executive director. So she’s excited to present a living artist like Peter Anton, who’s still around to speak for his work. The exhibit will serve as the next chapter in the life of a man who once ran a talent group whose young entertainers put on over 1,000 shows over a 20-year period. We meet several of these children in “Almost There," some of whom are in the paintings Intuit exhibits.

The show is a success. We see Anton playfully interacting with visitors and reuniting with some of his old neighbors. The film is half-over, and uplift is already in the air. Then “Almost There” lowers the boom on us. Here’s where I must tread lightly. One of Intuit’s visitors is Olga Briseno, the editor of the Times of Northwest Indiana. Fascinated by the rapport Anton has with the people who knew him, she figures he’s a local celebrity. So she digs into her archives to find stories on Peter Anton. What she finds is so unpleasant it stuns the filmmakers.

In its most effective segment, “Almost There” explores the ramifications of this discovery and how better due diligence could have led to this information much earlier. There’s a power to this section that makes the viewer vibrate with rage and uncertainty. Rybicky and Wickenden ask the right questions of their interviewees, their subject and of themselves. And then, almost as suddenly as it was raised, the issue nonchalantly falls by the wayside as “Almost There” works its way to its warm, fuzzy finale.

I couldn’t continue on that same path; I remained trapped inside the messiness of the film’s big secret, especially in light of the difficult questions it raises regarding the separation of an artist’s actions from their art. That’s a fascinating, loaded topic, one that deserves more time than “Almost There” can handle without harshing the viewer’s mellow. I sensed the film wanted me to give a benefit of doubt that I simply could not give, and my emotions hardened with suspicion.

A great film critic recently explained to me that the two-and-a-half star rating is appropriate when there are many elements of a film that one loves, but also several bad elements that one cannot reconcile. If one feels more strongly about the latter, the most honest thing to do is choose the 2-1/2 star grade. “Almost There” has some extraordinarily fine elements, but its big reveal destroyed all the goodwill it expected I would feel by film’s end. Your mileage may vary. 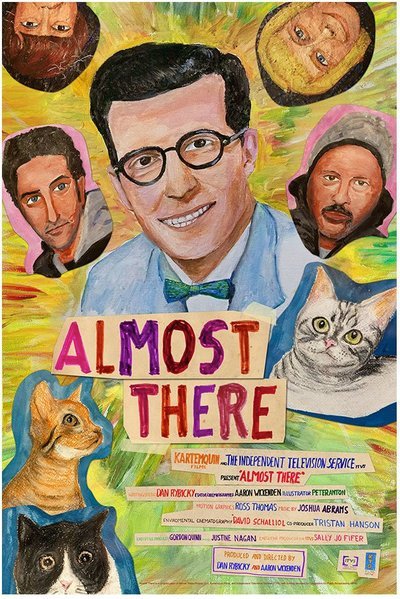 Peter Anton as Himself