"We tell stories about what we're seeing, stories that are hopeful, engage audiences, and hopefully connect people to the democratic process. From the beginning, we were sharing skills ... not just [concerning] filmmaking and storytelling, but how to show a film, and have it have an impact," said Kartemquin co-founder and activist Gordon Quinn, at an event Friday morning at the Gene Siskel Film Center. With these goals, it is no fluke that one of Chicago's most essential filmmaking forces, this not-for-profit documentary collaborative founded in 1966, will reach its 50th year of existence next month, after giving the world films that range from "Home for Life" to "Hoop Dreams" to "Life Itself" over its first half-century.

To celebrate the values of Kartemquin, both of past and their future, members of the Chicago film community and many others assembled to hear first about the latest that Kartemquin has to offer as its hits this milestone.

In essence, the collective is celebrating their 50th year by treating movie lovers—those with internet connections, TVs, and those throughout the nation—to a yearlong master class in American documentary storytelling, by sharing their catalog and providing access to the ingredients that have made the Kartemquin documentary collective a resonating force in American filmmaking.

For one, starting on January 1, 2016, the Kartemquin site will start streaming each Kartemquin title in chronological order, starting with “Home for Life” from 1966. Kartemquin media director Tim Horsburgh spoke about how additional supporting materials from the archives will be offered, as continued with Twitter chats, conversations, essays and “whatever else we can muster from the Kartemquin community.”

Aside from taking their catalog into the public accessibility but private form of streaming, Kartemquin is also taking their films to various venues throughout Chicago. Currently on the roster to host are Chicago Cultural Center, the Gene Siskel Film Center, the University of Chicago, Free Spirit Media, Chicago Filmmakers, CTVN, Southside Projections, Block Cinema and the new Arclight Cinema. These are in addition to the workshops, panels and master classes that will be offered throughout the city.

In keeping with Quinn’s vigilance to have documentaries shown on public television (as has been the case with previous Kartemquin releases), through 2016 there will be monthly WTTW PBS broadcasts of Kartemquin films, starting with 2014’s “The Homestretch” on January 21, 2016. “The Trials of Muhammad Ali” will be screening in February 2016, and 1974’s “Now We Live on Clifton” & “Winnie Wright, Age 11” will be broadcast in March 2016. The January and March presentations will be preceded by free public screenings in Chicago.

To provide a more personal interaction with the KTQ stories, people will be able to physically interact with the history of the documentary collective through an exhibit at Expo 72 that will open May 28, 2016 and run through August 21, 2016. The exhibit will feature walking tours and a curated selection of Kartemquin’s historical photographs, artwork, and video and film mechanics. The working title, as announced by Michelle Boone (Commissioner, City of Chicago Department of Cultural Affairs and Special Events), is “50 Years of Kartemquin Art and Filmmaking Ephemera.”

Not to keep the Kartemquin power strictly within the Windy City, the collective will be having multiple retrospectives at venues that include the UCLA Film & TV Archive in Los Angeles (set for fall 2016) and the Alamo Drafthouse, among others that have yet to be announced.

The history and legacy of Kartemquin will also be explored and available to all through a book set for release in 2016, as written by Heather McIntosh, a mass media professor at Minnesota State University.

The centerpiece of Kartemquin's 50-year celebration will be a “Milestones” public gala at Chicago’s Harris Theater on June 24, 2016. The event will reunite filmmakers, subjects, and prominent partners, fans, and alumni across the five decades of the collective. The honorary chair of the evening will be the our own Chaz Ebert, President of The Ebert Company and Publisher of RogerEbert.com.

In anticipation of the latest theatrical release to come with the Kartemquin branding, the trailer was screened for “Almost There,” directed by Dan Rybicky and “Best of Enemies” editor Aaron Wicknden. The film opens in New York this weekend, but will be playing the Gene Siskel Center starting next week, with a packed schedule of Q&A activity following each screening, to continue Kartemquin’s full-scale expansion and immersion into its films. The documentary, about an Indiana outsider artist that is discovered by Rybicky and Wickenden, will have Q&As throughout the week, including two hosted by writer Matt Fagerholm and yours truly.

This morning’s event panel consisted of various executive directors and board chairs, of past and present, speaking about the previous successes and new goals of the not-for-profit. The main speaker, so-to-speak, was a co-founder of the Kartemquin collaborative, Gordon Quinn. Tomorrow night, Quinn will receive a 2015 Career Achievement Award from the International Documentary Association (IDA), an award previously given to the likes of Robert Redford, Werner Herzog, Barbara Kopple and Michael Moore. 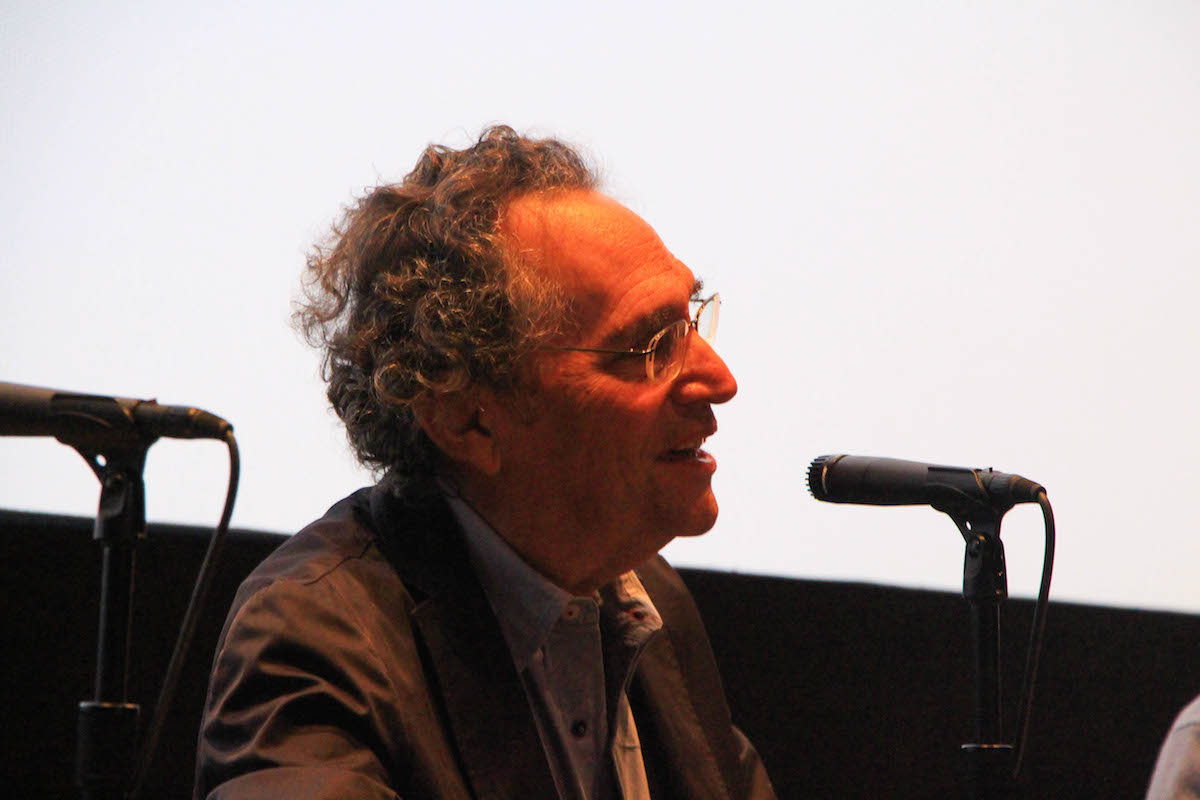 Quinn provided an image of Kartemquin that seems timeless to the cause of the doc collective. “50 years ago we started making films to observe the world, and that world was Chicago.” In a spiel that was jokingly prefaced as a dry run for his IDA acceptance tomorrow evening, Quinn expressed how Kartemquin has always been about engaging audiences, and connecting to them to the democratic process. He routinely and passionately emphasized the two “D’s” within the Kartemquin philosophy—Documentary and Democracy. The two words reveal the power behind Kartemquin—a passion for non-fiction storytelling, and a fervor to use free speech and progressive perspectives for a connective good.

Ever an activist, Quinn contextualized what Kartemquin has achieved by touching upon what he notices when he walks around the KTQ offices even today. Reflecting upon the next generation of KTQ filmmakers, Quinn said that it “reminds me of us back in the beginning, when we were idealistic and passionate and very hard working.”

Along with Quinn, the event was attended by other independent Chicago filmmakers and Kartemquin alumnus, like Mirko Popadic. He had an eye-opening experience with the simple, revelatory beauty of a film like “Inquiring Nuns” (“Are you happy?” ask a group of sisters to unsuspecting Chicagoans), and then later went on to do camerawork for various Kartemquin projects like “Hoop Dreams” and “The Interrupters."

I also talked with Peter Kuttner, who directed the Kartemquin film “Now We Live on Clifton,” and spoke about the hunger of making films when Kartemquin was just starting. When we briefly touched upon the term “narrative" when it comes to films, he stated firmly that he doesn’t believe in it. As he reasons, "if the stories told within Kartemquin films aren’t considered true narratives, then what is?" As the very human power within these films has proven time after time, he's right. These are stories larger than life, in the way only great documentaries can be.