Examining the fiery, acerbic debates televised debates between William F. Buckley, Jr. and Gore Vidal during the Republican and Democratic conventions in 1968, Morgan Neville and Robert Gordon’s “The Best of Enemies” provides a rich, extraordinarily fascinating account that’s sure to have many viewers’ minds constantly shuttling between then and now, noting how different certain things about politics and media were in that distant era, yet marveling at how directly those archaic realities led to many of our own.

The differences may jump out first. Like the Beatles on Ed Sullivan and Neil Armstrong walking on the moon, the Buckley-Vidal throwdown was the product of the decade when television was truly in full effect in American life, and much was brand new. The 1968 conventions were the first to be broadcast in color, and an estimated 80 percent of Americans watched them. It was not an even playing field for the three networks, though. CBS and NBC had their star anchors (Walter Cronkite on the former, Chet Huntley and David Brinkley on the latter) and set out to broadcast the events gavel-to-gavel.

Poor third-place ABC, with neither the stars nor the resources to match its competitors, needed a gimmick, and it lit upon a corker: have two ideological opposites debate the conventions as part of the network’s coverage. The choice of antagonists could not have been more incendiary. William F. Buckley, editor of the National Review and host of PBS’ “Firing Line,” was already the nation’s leading conservative media celebrity. Asked by the network if there was anyone he would not debate, he said he would refuse any Communist, or Gore Vidal. So the network of course enlisted Vidal, a celebrity provocateur from the left side of the dial, and persuaded Buckley to accept it.

The two had a history. They had crossed paths at political events in 1962 and 1964 and come away with a profound mutual loathing. As one interviewee, the late Christopher Hitchens, understates, “They really did despise each other.” That antipathy, which evidently owed much to Vidal’s taunting pan-sexuality and Buckley’s rigid Catholic revulsion at same, didn’t erupt into history-making acrimony till the ninth of the ten debates, but it’s in plain view from the first.

These exchanges came in the context of an America that was “being split at the seams,” as one commentator puts it. The Tet offensive in the winter showed the Vietnam War spiraling toward disaster. Martin Luther King and Robert F. Kennedy were assassinated not long after, the former death sparking riots across the country. When the Republicans decided to hold their convention in Miami—their first below the Mason-Dixon line in 104 years—it was intended to distance the event from protestors.

When we see Buckley and Vidal in the first debate, both seem self-conscious and slightly awkward, with forced smiles and graceless stabs at jocularity. No doubt the pressurized situation and their intense dislike of each other accounted for this initial discomfort, but the two media pros soon overcame it. Still, they were fundamentally ill-matched in the initial round: While Buckley had gone sailing prior to the convention, Vidal had hired a researcher and come away with a sheaf of Buckley quotes that he used to nail him. Buckley soon rectified his mistake.

Speaking of the differences between then and now, it’s striking how remote from any current TV personalities they are. Both were products of plush upbringings and boarding schools, with patrician accents and mannerisms that scream privilege and hauteur. Yet despite the upper-crust images, they were not, as one observer notes, products of the old Eastern establishment, but conquerors of it: outsiders who found their way in.

Public intellectuals of a sort almost unknown today—which is to say, real intellectuals totally accustomed to the media glare—both men were extremely prolific authors who also ventured into the arena of politics. Vidal ran for Congress in 1960 with the support of presidential candidate John F. Kennedy (Jackie Kennedy was related to the author by marriage); on losing the race, he bitterly left the U.S. for Italy. For Buckley, losing his race for New York City mayor to liberal John V. Lindsay in 1965 was not a total defeat; it helped him sharpen the ideas that would guide right-wing politicos in years to come.

In a sense, the two debaters we see sparring in 1968 are prophets in the making. Buckley’s ideas, perhaps more than any other thinker’s, undergirded the conservative movement that gathered momentum during the next decade and resulted in the election of Ronald Reagan in 1980. And Buckley’s own brother, Reid Buckley, actually uses the word “prophesy” in crediting Vidal for warning about the dangers of America turning into an overextended empire like ancient Rome.

Indeed, the racial turmoil of 1968, the arguments over economic inequality (Vidal called the GOP the “party of greed” while quoting statistics showing far less disparity than is the case now), the draining foreign entanglements, the “culture wars” over values and morality, together with Buckley’s and Vidal’s provocatively contrasting views of all such subjects – it all make the debates we hear feel very much connected to the present day.

Yet the sharpest verbal blows waged aren’t ideological but personal. It happens in that ninth debate, after the scene has shifted to the Democratic convention in Chicago, where chaos reins in the streets outside (and Vidal has been tear-gassed along with Paul Newman and Arthur Miller). During one heated exchange, Vidal calls Buckley a “crpyto-Nazi” and Buckley replies, “Listen you queer, stop calling me a crypto-Nazi or I’ll sock you in your goddamn face and you’ll stay plastered.”

Even now, you can practically hear the nation gasp. Mr. and Mrs. America were not used to hearing such language, or witnessing such visceral hatred between respected cultural figures, on the pacifying white-bread TV of the time. The repercussions were felt instantly. Says Dick Cavett of ABC: “The network shat.”

Strangely, as the film shows, this moment of white-hot vituperation had an even greater effect on the two men involved than on the culture at large. Neither could put it behind him. Buckley wrote a long piece for Esquire the following year ruminating on the contretemps. When Vidal riposted with (insulting) thoughts of his own, Buckley sued the magazine and the writer, a lawsuit that dragged on for years (Esquire eventually settled). As the intimates of both men tell it, they were haunted by the exchange till the end of their days, with Vidal apparently gaining a small degree of satisfaction in outliving Buckley and thus being able to have the final word.

Naturally, the way the Vidal-Buckley battle served as a template for all the idiotic political shouters on TV in years to come does not go unnoted. And not surprisingly, the verdict on this is that we’ve now evolved into a polarized culture where such high-volume screaming matches are virtually all heat and no light. The 1968 debates, critic Eric Alterman offers, were a “harbinger of an unhappy future.” 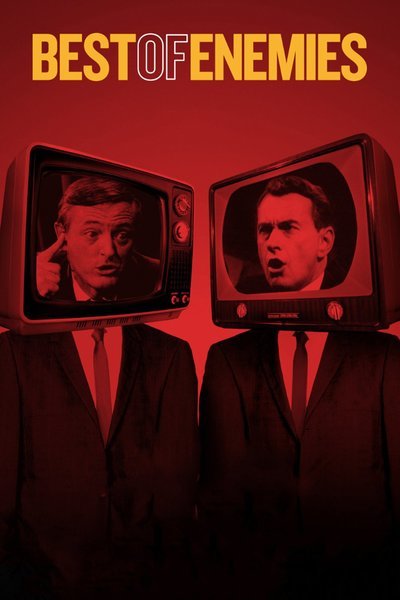 Rated R for some sexual content/nudity and language

Kelsey Grammer as Himself

John Lithgow as Himself

Gore Vidal as Himself

Dick Cavett as Himself

Christopher Hitchens as Himself

Noam Chomsky as Himself