Until July 25th, the three lead actors of the best French film of the second half of the 20th century were all alive and working.

Bernadette Lafont (born October 28, 1938; died July 25, 2013) was one third of the romantic triangle in Jean Eustache's 1973 "The Mother and the Whore" alongside Jean-Pierre Leaud and Françoise Lebrun. The film is a 3 hour and 35 minute long talkfest shot in black and white on the streets and in the cafés of Paris at a time when it was beginning to sink in that the hopes and dreams of the student revolution for which the shorthand is "May '68" might not work out after all.

Every syllable is scripted and yet the result feels like that elusive thing art sets out to capture: Real life. If you were to see it now for the first time you might find it overlong and pretentious or—and this would be my fervent hope—you might say "Wow! Now THAT'S a movie!"

Lafont, who was born in Nimes in southern France, was on screen at the very start of the French New Wave. She outlived François Truffaut (Feb 6, 1932–Oct 21, 1984) who gave her her first role in 1957 in his directing debut "Les Mistons" ('The Mischief-Makers').

Pauline Kael wrote of the 27-minute long film in which Lafont starred opposite her then-husband Gerard Blain, whom she had married at age 18: "The English commentary, in particular, with its high-flown romantic nostalgia toward the first confused stirrings of sexual desire, may make you exclaim: 'Oh the French are at it again!'" 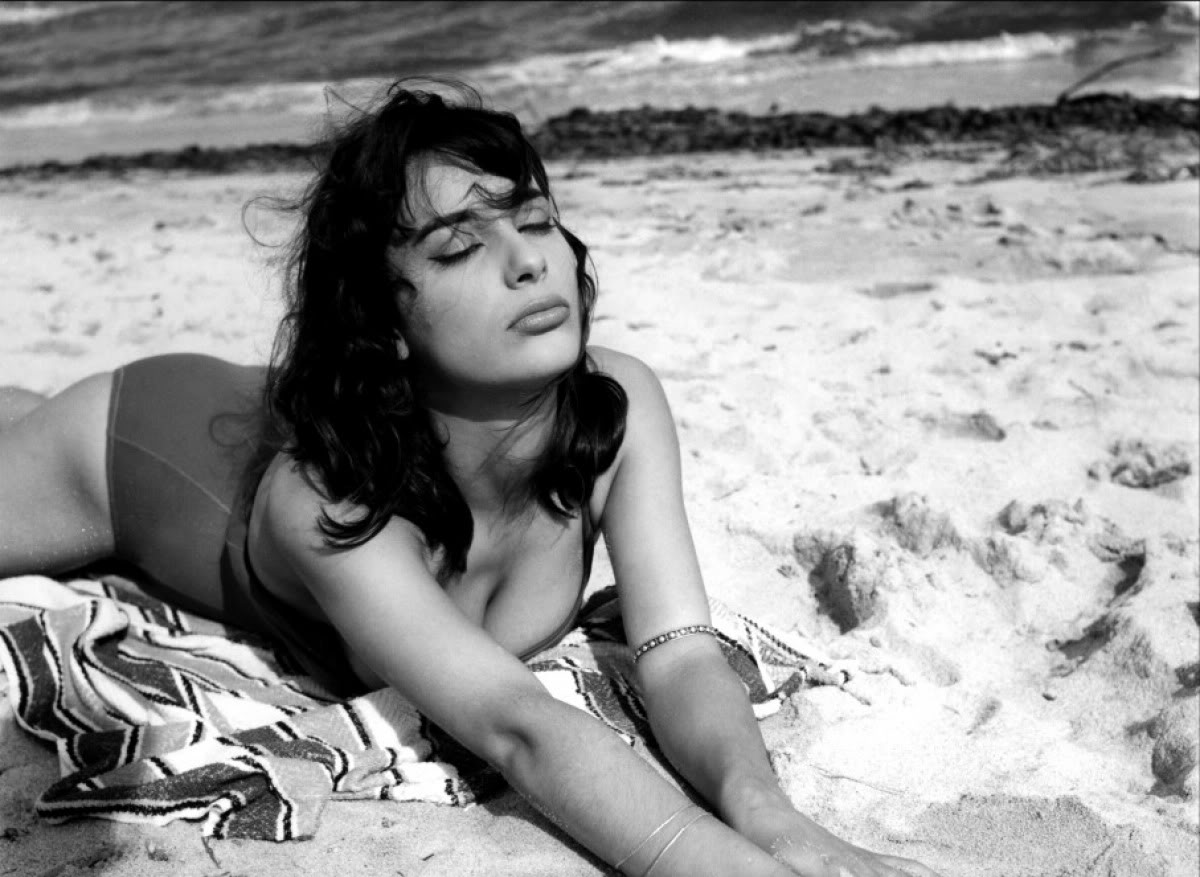 Lafont gave off an aura of sex on behalf of brunettes as surely as Brigitte Bardot did on behalf of blondes. (And both set out to be dancers—there's a lot to be said for knowing how to move on screen. The camera tends to love good posture and good posture is an excellent stance from which to subsequently slink and prowl with matter-of-fact allure).

Blain had already been married, to an actress and, as a precaution, when proposing he made Lafont promise she'd never go into acting. She assured him that she intended to stick to dancing.

The marriage didn't last long, but Lafont's career did.

Embodying radiantly trangressive characters more often than not Lafont went on to appear in over 100 films and to act in two dozen plays, ranging from Sacha Guitry to "The Vagina Monologues." Not unlike Karen Black—another iconoclastic actress whose early roles jumped out at viewers then and have stood the test of time—who just died, also age 74, Lafont never stopped acting. 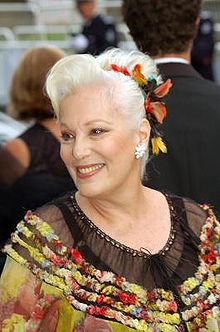 Her last role was as the title character in "Paulette" earlier this year. The fact-inspired dark comedy centers on a retired working class woman on an inadequate fixed income who decides to make ends meet by dealing marijuana and hash. It was a hit in France (one million tickets sold) and just opened strong in Germany. "When I read the script," Lafont said, "I thought some of the characters I played in my thirties could have ended up 40 years later like Paulette. The great roles don't tend to be normal people."

Lafont is astonishingly good in Claude Chabrol's "Les Bonnes femmes," (1960) one of the most spot-on films ever made about the drudgery of work, especially the kind where you don't do any heavy lifting or get your hands dirty. It's about a great many other things, too, but Lafont excels as one of 4 clock-watching shopgirls who stand all day behind their respective counters in a modest household appliance store in Paris whose owner-cum-boss is a lecherous imperious jerk.

The gizmos we use have evolved since then but this anything-but-monotonous portrait of bread-winning monotony feels timeless.

Chabrol's then-wife and frequent leading lady Stephane Audran is another of the female clerks, one with a crafty secret life. Another clerk is engaged to be married. The scene in which she meets her fiancé's parents is a horrifyingly funny portrait of boorish male insistence. Then there's the fourth clerk, who wonders about the exotic man on a motorcycle who seems to have his eye on her.

Lafont's character wants to have some fun in life. She has a boyfriend but she's not above (or below) putting out for a businessman on the make because he bought her dinner and some drinks.

A great many of her roles could be filed under "I sleep around—and what of it?"

You needn't take my word on it about "Les bonnes femmes." In an interview this past February Lafont said it was her favorite among her films and claimed that "Stanley Kubrick watched it to prepare for 'A Clockwork Orange.'"

I don't see the connection, but I love the sound of it.

Lafont made a total of seven films with Chabrol.

As a teenager, Lafont bought movie tickets for a local seamstress so the woman could study the dresses movie stars wore and sew replicas for Lafont.

Whenever there's heated debate about women film directors it would be a mistake to omit Nelly Kaplan, who gave Lafont a radically disturbing leading role in her "La Fiancée du pirate" in 1969.

Franco-German TV channel Arte telecast "The Mother and the Whore" in Lafont's honor on July 29th. My dentist, who gets out to the movies a handful of times a year, told me he'd stumbled upon the Arte showing and was drawn in without knowing what it was. (I happened to be in his chair when Lafont's death was announced on the radio and I had to come back a few days later to have my crown adjusted.)

If you tell people: "You really must see this 3 hour and 35 minute long black and white French film" they may or may not drop everything and act on your advice. But if somebody happens to turn on the TV and that same movie happens to draw that somebody in—well, what greater proof is there than THAT of a film's inherent power?

That's the good part. The bad part is that the film is not available on DVD (in France or the U.S.) and never has been. There was a VHS edition—Milos Stehlik of Facets Cinematheque in Chicago told me their rental copy was stolen long ago.

This movie and I go way back. I ventured from my childhood home on Chicago's Far North Side to the city's Near North side as a 17-year-old to see the film when it was released in the U.S.. The (now long gone) freestanding cinema in question couldn't write out the full title on the marquee—it was advertised as "The Mother and the W" followed by 4 asterisks.

Nowadays you could probably market a line of "I'm A Little Whore" clothing to 12-year-olds without raising a ruckus.

Thanks to the performances in "The Mother and the Whore," the viewer is made aware that the immature man caught between his impulses toward two women doesn't emerge unscathed. I remember stumbling out onto the street feeling I'd had a numinous experience. If Paulette had hissed "Hey, kid —wanta buy some hash?" I'd have said "No thanks, I'm high already."

Oddly enough, the man I married—a fellow Chicagoan—also saw the film during that run (we hadn't met yet). And he sometimes muses that the fact that he felt drawn to and ended up living in France can maybe, just maybe, be traced to that film. In that respect, the people who claim that movies are "dangerous" are right.

Where does "The Mother and the Whore" get its power? Lebrun had been the director's girlfriend in real life. And Lafont was playing the director's current real life girlfriend, Catherine Garnier, who came up with costumes for the film. Portions of the movie were shot in her apartment and the boutique she ran. Some of the dialogue echoed her real pronouncements and their actual arguments, which Eustache apparently tape-recorded without her knowledge.

Call me a silly romantic, but movies like "Pacific Rim" don't have that effect on most people.

On the topic of life and death, Lafont signed the 1971 "Manifesto of the 343." The 343 women who affixed their names to the text written by Simone de Beauvoir stated that they had had an abortion. Abortion was then illegal in France. The Manifesto was published in the major weekly newsmagazine Le Nouvel Observateur. The women who admitted they'd had abortions (from which it follows that they'd had sex) included Catherine Deneuve, Agnes Varda, Jeanne Moreau, Micheline Presle, Françoise Sagan and Margueritte Duras. That's a very impressive list of talented women. At the time, they were dubbed "sluts."

(Interestingly, one document that circulated but was never published said "I declare that I was an accomplice to a woman who aborted." The men who signed included François Truffaut.)

When they were in search of women to sign the manifesto, De Beauvoir looked through her address book, as did Christiane Rochefort who had long done PR for the Cannes Film Festival. Simone Signoret wrote in after the publication asking to be added to the list.

When, not long ago, some members of the current wave of French feminists suggested that people stop calling it "The Manifesto of the 343 Sluts" (the French term "salopes" can also be translated as "bitches") Jeanne Moreau exclaimed that she was proud to have been a slut and intended to remain one.

The idea was that if high profile celebrities admitted they'd broken the law, the authorities would be reluctant to prosecute them. Good tactic. It eventually worked. Abortion was legalized in France in December 1974. (The Manifesto demanded free and legal abortions. Today the procedure is covered by government-mandated health insurance.)

On the topic of abortion and societal pressure, Chabrol's excellent fact-inspired "The Story of Women" (1988) stars Isabelle Huppert as a woman who performs illegal abortions in Vichy France, which leads to her becoming the last female to be guillotined.

Lafont may have undergone at least one illegal abortion, but she had three children with her second husband, Hungarian sculptor Diourka Medveczky whom she'd met when she was just 20. Their daughter Pauline had begun to make her mark in film when she vanished one day in 1988. Her body was found three months later. She had apparently slipped and fallen while hiking alone. Lafont later said that continuing to perform helped her cope with the loss.

Lafont was convincing in small, serious films and broad comedies alike. And, for that matter, all sorts of material in-between.

You may know Julie Delpy best from her work with Richard Linklatter opposite Ethan Hawke, but she's a rather good director. In Delpy's "Skylab" a bittersweet autiobiographical ensemble comedy set in 1979, Lafont plays Delpy's grandmother. She's marvellous. Delpy's other grandmother is played by Emmanuelle Riva, who you may have seen in Michael Haneke's "Amour."

I taught "The Mother and the Whore" for many years to American college students abroad, most of whom were roughly the same age I was when I first saw it. (The Videotheque de Paris, now known as the Forum des Images, had a beat-up VHS copy.) A batch of students who had never known any president but Ronald Reagan weren't impressed. Why? They thought Leaud looked silly wearing his ever-present long scarf and they thought his character would never get a job if he spent all his time hanging out in cafés and flirting with women.

"Wears long scarf and flirts with women in cafés" isn't much of a resumé in 2013. But 40 years ago, it seemed like one of the best jobs in the world.

Wherever a copy of "The Mother and the Whore" surfaces, Bernadette Lafont will still be adjusting that long scarf around the neck of the guy she puts up with. And whether we understand why or not, we'll believe that in that moment she loves him.