"Passion Fish:" A struggle of wills

When I watched "The Intouchables" (2011) at the local movie theater several months ago, I got a nagging dissatisfaction with that crowd-pleaser, which was about the warm friendship between a disabled man and a caregiver hired by him. The movie was surely a pleasant drama with two amiable lead performances, but I found it too mild and superficial; it merely loitered around thin stereotypes and worn-out clichés and it went no further than that.

Its weakness took me back to when I watched John Sayles's "Passion Fish" (1992). It can be said that this movie also loiters around its characters, but this is a small but richer character drama. Its two main characters are believable and sharply drawn, the interactions between them are compelling, and the movie does a lot more than depicting a tough struggle of wills between two headstrong characters who come to recognize and depend on each other while stuck with each other.

In the opening scene, May-Alice Culhane (Mary McDonnell), a TV soap drama star living in New York, wakes up to find herself in bed at the hospital. Due to a complete spinal lesion caused by a car accident, her legs are permanently paralyzed. That means her acting career is nearly finished, and the TV in the hospital room shows that she has been replaced in her show. "That's my close-up." she says in discontent while looking at TV. 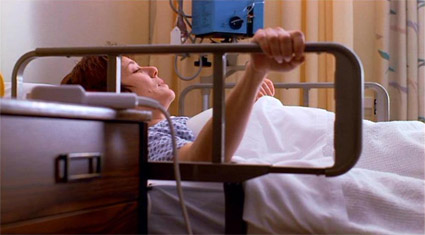 After going through physical therapy sessions with no particular enthusiasm, she decides to go back home, to a small country town in Louisiana. Because she lives alone in her family house near the lake, she needs a full-time companion to take care of her, but she is not a model employer to say the least. Resentful and sulky about what has happened to her, she confines herself to a couch with TV and a bottle of wine, an we get the hilarious sequence where she encounters several employees who eventually leave or get fired. At one point, she throws an acerbic line to a blunt nurse with thick foreign accent: "Weren't you in Ilsa: the She-beast of the Gulag?" 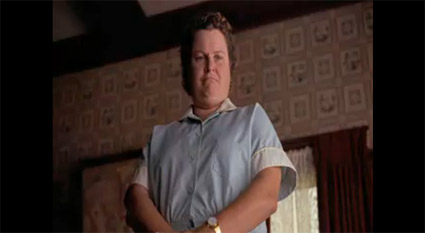 After going through five employees, May-Alice manages to get another one from the agency. She is a quiet, reserved woman named Chantelle (Alfre Woodard), who soon finds that the job is not going to be easy -- but she is determined to do her work as much as she can while frequently clashing with her difficult employer. 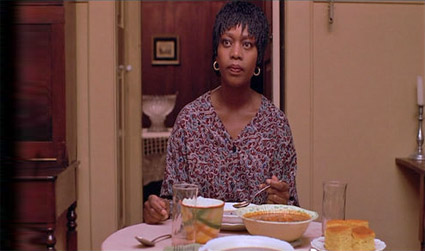 The movie revolves around their constant tug-of-war. This is a circumstance we have encountered before in other similar movies about disability, but in this case, it's fully energized by two stubborn women who won't step back easily. Observing their sparky interactions with a realistic approach, Sayles' smart screenplay presents the dynamics between them in various tones. Sometimes it is an angry shouting match, sometimes it is a passive-aggressive battle of wills, and sometimes it is a sensible persuasion followed by a grudging agreement.

As the time goes by, May-Alice and Chantelle approach a certain level of equilibrium. Although she is the employer with money, May-Alice depends a lot on Chantelle. At one moment, she experiences how difficult it is for a paraplegic to take care of herself when she is alone in the house. The movie has a clear and unpretentious view on her disability; watching her physical therapy scene, I thought about how hard it is to live with a body no longer under one's control. 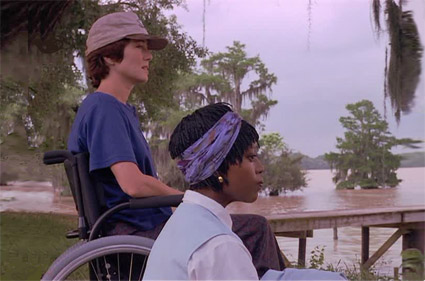 In the case of Chantelle, she can just walk away from her employer, but she needs a stable job for personal reasons. However, that doesn't mean she'll tolerate her employer's willfulness. Though she admits that she is not a very good nurse, she doesn't neglect what she has to do as a good employee. She pushes May-Alice to do the exercise for strengthening her upper body. She strictly blocks her from alcohol when she thinks it is necessary. And she also gently convinces her employer that she may be the best option available to her at present ("the next one may not be so nice as me"). 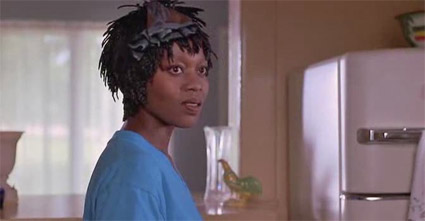 With no conventional plot, the movie gets lots of space for not only developing the relationship between them but also developing colorful supporting characters with their own life stories behind them. Sayles provides a bunch of well-defined three-dimensional characters in his supporting cast, and they're impressive; even the caregivers before Chantelle are quite interesting to observe and listen to.

The best example is when May-Alice's 'literary' uncle Reeves, deliciously played by late Leo Burmester, suddenly visits her house for drink. Within few minutes, Uncle Reeves succinctly tells us and Chantelle lots of things about May-Alice's family and himself, with the sweet affection between him and his niece remaining the same as before.

Another interesting moment comes when May-Alice meets a surprise visitor looking for Chantelle. Though we quickly learn about who he is, his rather ambiguous intentions casts faint uneasiness on the scene. When Chantelle's young daughter comes to visit her mother along with her grandfather later in the story, she is happy to see her mother again, but their tentative private moment suggests that this young girl must have seen a lot from her mother on bad days in the past. 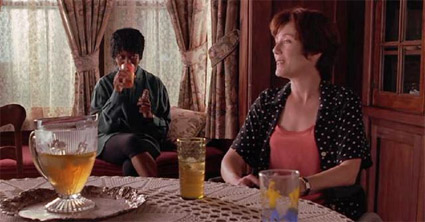 My favorite moment is when May-Alice is visited by her actress friends and the young actress who replaces her in the show (They are played by Angela Bassett, Sheila Kelley, and Nancy Mette). After we get some good laughs due to a funny confusion associated with the show (its storyline seems to be as preposterous as an average American TV soap drama can be), they talk about their acting careers, and then the conversation is led to a captivating monologue from one of them. While she confides to others one painfully funny experience from her early hard years, her fellow actresses listen to her with knowing looks.

Meanwhile, May-Alice and Chantelle respectively find the possibility of romance. May-Alice is glad to see her high schoolmate Rennie (David Strathairn) when he comes to her house for repairs. They were not that close to each other in the past, but they are amiable to each other now, and it can possibly be more than that, though she is a paraplegic and he is a married man with five kids. Chantelle gets close to a jovial horse trainer named Sugar (Vondie Curtis-Hall), but she is not sure about whether she can be closer to him. The movie handles these downstairs and upstairs romances with warm sensitivity while leaving open possibilities to them. 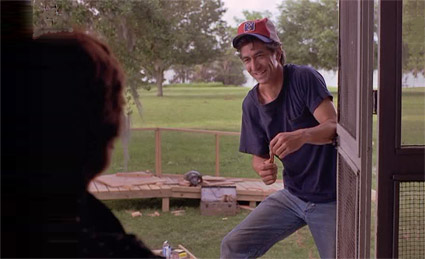 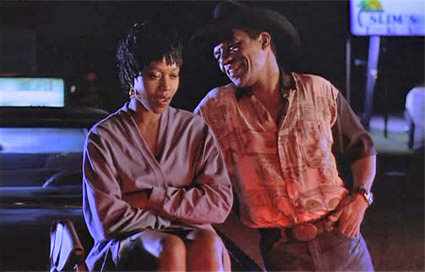 Amidst these various elements freely flowing around them, Mary McDonnell and Alfre Woodard hold the emotional core of the film with their superlative performances. McDonnell, who was Oscar-nominated for this movie, gives nice little touches to her performance. Because she is still an actress to the bone, May-Alice plays herself in different ways while interacting with different people, and she gets a droll scene when she is visited by a couple of fascinatingly shallow high schoolmates who do not remember well about their high school years. McDonnell also conveys the shifts inside her character through small gradual changes in her face and accent; May-Alice was probably bitter and unhappy with her life before the accident and remains pretty much same after the accident, but she slowly reveals her softer sides while her tough sides remain intact with sarcastic wit. 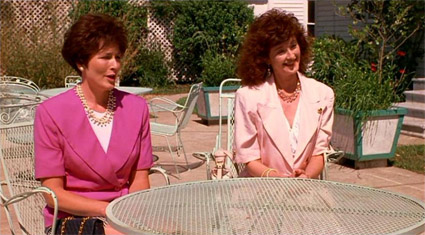 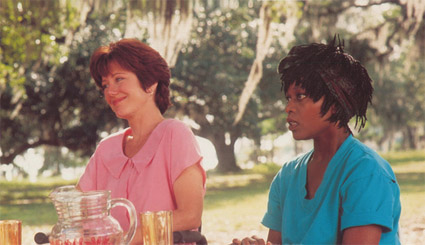 Woodard, who was regretfully not Oscar-nominated, is an equal match for McDonnell with her relatively restrained but equally indelible performance as a complex character uncertain about her future but resilient enough to stand up against her employer. The chemistry between McDonnell and Woodard is crucial for the tension in their relationship. May-Alice gradually accepts that Chantelle is someone she really needs while Chantelle gets some help from her, and they become a little more generous to each other with mutual trust in the end, but they still have too many things left unresolved between them to be good friends. Besides, these ladies are too proud to be sentimental; when they have a private conversation alone around the finale, it is mostly a practical talk on their future. 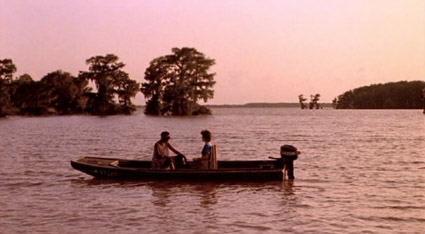 Notably less political than most of Sayles' other works, "Passion Fish" is an unsentimental but heartfelt story about how two different people form a relationship amid their struggles. The movie wisely avoids falling into the traps of tiring melodrama clichés, and it also pays a great deal of attention to the world and the people surrounding them. The cinematography by Roger Deakins gives us a natural view of bayou country, which sets a nice mood with good soundtrack in the film, and the movie has small but fabulous moments to be savored at its corners. This small gem is a pure human drama which can be tough, funny, and insightful at the same time. "It's uphill!" "So is life!"

1. I heard that they are planning to remake "The Intouchables." "Passion Fish" may be a good guide for a better remake.

2. According to IMDB trivia, the passion fish myth told in the movie is Sayles' invention.