Chicago Tribune critic Michael Phillips was clearly proud of being dubbed “one of the dopest dudes of the business” by African American Film Critics Association co-founder Shawn Edwards when he accepted the Roger Ebert Award on Saturday afternoon. Phillips, who had fiery words of resistance for artists and writers, was one of four people honored at the California Yacht Club luncheon in Marina Del Rey, California. The special achievement awards luncheon preceded the eighth AAFCA Awards Ceremony, which is at the Taglyan Complex on Wednesday, February 8, 2017.

Chaz Ebert presented Phillips with the award named for her late husband, reminding the audience that the AAFCA was ahead of the #OscarsSoWhite activism. While she wasn't sure what the organization would do with the award, AAFCA surprised her by giving the first award to Justin Chang in 2014. Ebert exclaimed, "You were an African American Film Critics Association giving an award in the name of a white critic and gave it to an Asian American film critic. Now, if that's not inclusion and diversity ..."

"I want the world to take notice of that," she added, "I hope you get to tell the president what you're doing here." She reminded the audience that even before she knew him, Roger championed African-American voices in the cinema because "Roger was just decent," and he did it "not because it was the hip thing to do; it was just the right thing to do." Diversity and inclusion is not only "good for the bottom line, but it's good for humanity” because “if you don't include people of this world, you're never going to heal it.”

Of Phillips, Ebert reminded the audience that he had temporarily replaced Roger on "At the Movies,” when Roger was hospitalized. Roger also recommended Phillips and New York Times critic A.O. Scott for the final season of the show. Since Roger's death, Phillips has remained involved in RogerEbert.com, mentoring Roger Ebert Fellows at the University of Illinois and attending Ebertfest.

Phillips was wowed by the talent in the room, saying, "Roger really was a hero of mine," and “really more of a collection of entire Avengers superheroes without the special effects.” Phillips added, ”Roger was heroic in his life as a journalist, as a critic, as a champion of film and of all the arts in the full spectrum of artistic expression from every point of view, every culture, every voice in the wilderness.”

Yet Phillips considered, “We may all work at what we do individually, but we do not work alone” and we must “hold ourselves and the powers that be accountable for what is possible and what is necessary.” Coming from a city that has been threatened with federal troops in a recent presidential tweet, he continued, “On a national level every day, in new and miserable ways, we are being told to go back to the way things were before all this lousy inclusion took over and all these dangerous doors opened. Our leader happens to be the angriest, least reflective white man alive. He scares people for sport."

Of Roger, Phillips said he was “a white man of privilege who knew he had no right to squander his position or his influence” and Roger “knew that critics should have one eye on the real world and what the facts in the movies are reflecting in that world, and other eye on the ideal world where we should go next as writers, filmmakers and as people.”

Phillips noted there was so much to celebrate this year with “Moonlight” that was “so much the right film to see at the end of the Obama administration.” He also praised Denzel Washington and “Fences” and called the movie “Hidden Fences” “well overdue.” AAFCA picked “Moonlight” for its Best Picture Award, Best Director (Barry Jenkins), Best Supporting Actor (Mahershala Ali), Breakout Performance (Janelle Monae) and Best Independent Movie. Washington won AAFCA’s Best Actor and Viola Davis won Best Supporting Actress for “Fences.” August Wilson received a posthumous AAFCA Best Screenplay. The cast of “Hidden Figures” won Best Ensemble and the song “Victory” won Best Song. Those awards will be presented during the Wednesday night gala. 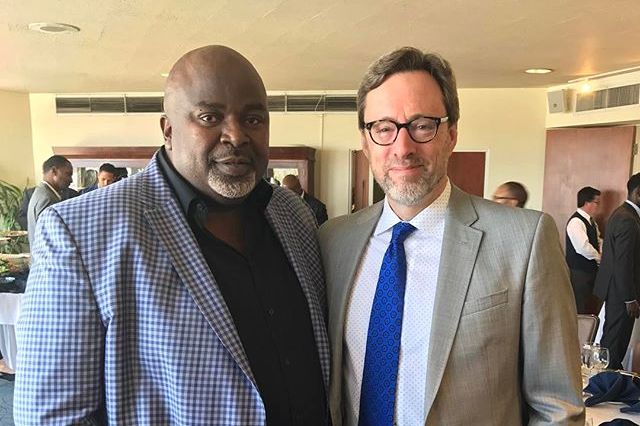 One of the signs that those old days will not be returning, at least without a fight, was the Ashley Boone Award, which Edwards noted was for an “entertainment executive of African descent whose high standards and work ethic provides an example for the next generation of African American entertainment professionals.”

Ashley Boone was appointed president of 20th Century Fox Distribution and Marketing in 1979, but he left to establish his own company. At the time of his death from cancer in 1994, he had held top marketing positions at United Artists, 20th Century Fox, the Ladd Company, Columbia Pictures, Lorimar Pictures and MGM, and helped market movies like "The Omen," "Julia," "The Turning Point," "Alien," "The Right Stuff," "Ghostbusters," "A Soldier's Story" and "Thelma and Louise."

His sister, Cheryl Boone Isaacs, President of the Academy of Motion Picture Arts and Sciences, remembered how he championed the marketing and distribution of “Star Wars” in 1977, and “suggested that the movie should open around Memorial Day.” This year’s recipient, Vanessa Morrison is Isaacs’ colleague and also from 20th Century Fox, something Isaacs feels would have pleased her brother. Morrison, along with Floyd Norman are on the A2020 Committee, a five-year initiative that Isaacs introduced in 2015 “to help the inclusion and expansion of people of color as well as women.”

Morrison noted that her mother had started the Black Filmmakers Hall of Fame in Oakland and through that, “I got to meet and know all of the greats, including Lena Horne, the Nicholas Brothers and Ashley Booth.” For Morrison, the idea that an African-American man or woman could reach the top of the executive ranks was “revelatory.”

While the Boone Award is about someone who has risen to the top, the Horizon Award represents validation that the recipient's career is on the rise and that AAFCA will be there to support the recipient. Actress Aisha Hinds, who plays the legendary Harriet Tubman in the WGN series "Underground" when it returns in March, presented the award to Hemingway, commenting that Hemingway "has bogarted such a huge part of the real estate of my heart."

In his remarks, Hemingway noted that it is such a blessing to be able to "tell stories about people, that reflects their every day humanity in all its variations, complexities and complexions, especially those whose stories have not been told." Speaking about "Underground," he noted, that once reading was a forbidden skill for black slaves. "Our show is about rebellion" and "resistance" and "about taking your own freedom and your power," he acknowledged. The people who fought to read to find freedom helped paved the way for others such as Frederick Douglass, Harriet Tubman and James Baldwin. Directing, he noted, is a medium where "an artist cannot afford his own tools," and that sometimes dictated the hues of the stories told, but with the increasing availability of technology and diversification of platforms, there are now "more ways to reach audiences." He hopes to "pave the way for many more voices to be heard" and to continue with a "posture of truth.”

On a lighter note, Peter Ramsey (director of "Rise of the Guardians" from Dreamworks Animation 2012 ), Marlon West (visual effects on "Moana," "Frozen," and "The Princess and the Frog" and "Mulan"), Rob Edwards (writer of "The Princess and the Frog" and "Treasure Island") and Nicholas Smith (editor "Brave") presented the 81-year-old Floyd Norman with the Legacy Award.

Edwards quipped, “"First off, it's good to be in a room where everyone is pretty much sure that Frederick Douglass is no longer with us.” Edwards joked that when he worked at the three-story Disney “hat building,” only “four black men walked in and out of that building every day and I was a temp and that includes security.” Of Norman, he said, “Floyd is like Mt. Rushmore, but black,” but also noted, “Floyd will always have a part of my heart because Floyd was one of the animators on the ‘Soul Train’ logo.”

West noted “There aren’t a lot of brothers doing animation” and while others might call Norman the “Forrest Gump of animation, Forrest Gump was a fictional character and he foolishly stumbles into history.” For him, Norman is more like the “Quincy Jones of Animation” because Norman’s a “badass talent who knows his business.”

Norman considered himself a lucky. “I was lucky enough to get a job at Disney because I had no reason to think that I couldn’t get a job … I was a lucky dude because I came to Hollywood with no baggage whatsoever.” Norman contends he had no idea that his color could keep him from getting a job and very decisively stated that “Walt Disney was definitely not a racist.” Still he added, “Not too long ago, we had a visitor at the Disney Studio, Dick Gregory.” Gregory wanted to visit the set of “Black-ish.” “I walked on to the set and there were black actors on the set and there was a black crew. You’re talking to a guy who arrived at the Disney Studios in the 1950s. The idea of black actors and a black crew on stage for me was unbelievable.”

AAFCA was founded in 2003 by Gil L. Robertson IV and Shawn Edwards. To see a complete list of winners of the 2017 AAFCA Awards, click here.

Images courtesy of AAFCA and RollingOut.com.