2009 was a great year for Kathryn Bigelow. After a 7-year hiatus from filming "K-19: The Widowmaker," she returned to direct "The Hurt Locker," a suspense and war film set in Iraq that has deservedly been recognized by critics and award bodies alike, and is expected to be one of the primary contenders for the Academy Awards. Bigelow is known for her superb work in the action genre, which is rarity among female directors. Her skill in filming tension and violence is as good as any of today's directors.

But what sets her apart from most of her contemporaries is her attention to her characters, which is clearly what draws her to direct. While her peers' films dictate what their protagonists are supposed to be (e.g. Michael Bay = macho, James Cameron = implacable, Michael Mann = professional), her films probe into what drives her heroes and heroines in their white-knuckle moments, without feeling judgmental about them. Manohla Dargis probably describes it best, when she dubs "The Hurt Locker" as, "diagnostic, not prescriptive."

The review
With this in mind, I decided to take a look back at one of the more memorable science fiction / action films I saw in the 90s; one of Bigelow's more overlooked films, "Strange Days."


The movie was released in 1995 surrounded by pessimistic American cultural low points such as the O.J. Simpson murder trial and the Rodney King beating, the film shares a grungy, threatening, and somewhat dystopian outlook of Los Angeles at the turn of the 21st century. Here, 1999's L.A. is an anarchic police state, largely resulting from the murder of Jeriko One (Glenn Plummer), a prominent rapper critical of police brutality.

The film's lead, Lenny Nero (Ralph Fiennes) is a street hustler and ex-cop who peddles illegal "Superconducting Quantum Interference device" (SQUID) recordings; essentially virtual reality mini-discs of other people's memories, which can be fully experienced by those who "view" them. Despite his seedy charm, he lives a lonely life, longing for his ex-girlfriend and singer Faith (Juliette Lewis), constantly replaying SQUIDs of their past relationship. 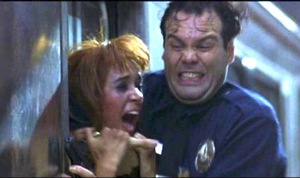 In his dealings, he receives a "blackjack" or snuff disc portraying the rape and murder of Iris (Brigette Bako), a prostitute and former close friend of Faith whom he knew and met within hours of her death. With the help of his friends Mace (Angela Bassett), a bodyguard who loves him, and Max (Tom Sizemore), another ex-cop and now private investigator, they look to find out why Iris was murdered, and hopefully save Faith from a similar fate.

James Cameron, who helped produce the film and write its screenplay, assigned this picture's direction to Bigelow (his ex-wife). He must have known that the similarities in their methods, as well as her filmmaking gifts, would keep his vision intact. There aren't the massive scale action sequences that one is accustomed to in Cameron picture. The action here is less technical and more personal (another trait in Bigelow's work). But despite these smaller-sized scenes, she maintains a disciplined mood and pace of anticipation and energy, in a style that can be easily mistaken as her husband's. The film's opening 3 minute shot alone is a fantastic achievement, looking like what Scorcese would have done with a De Palma long take. 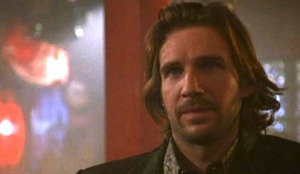 Another similarity here is the presence of very strong female characters, in either emotion or physicality. In the past 30 years where women in action films have been mostly tripping over themselves just to hold a gun properly let alone fire it, or be the partner nagging the male to be there for his family, these liabilities are failings you cannot accuse Kathryn Bigelow (nor James Cameron) of. Here, Angela Bassett is a powerful maternal figure as well as a stone cold fox. She plays the sexiest butt-kicking single-mother since Linda Hamilton's Sarah Connor. For the life of me, I cannot believe that she has been the most underused acting resource in Hollywood ever since.

Speaking of Mace, Bigelow does something interesting with her character. She switches it with that of the male lead, turning Mace into the powerful action hero rescuing Lenny in the most dire of situations. There is one shot showing Mace cocking a glock in her holster between her two thighs, concealing it under her party dress. It is probably the single most masculine scene I have ever seen a heroine do (outdoing Linda Hamilton's pull-ups in "Terminator 2: Judgment Day"). This surprising role reversal is perhaps a big factor why the movie tanked at the box office. 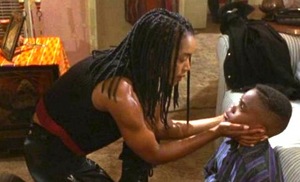 These are some scenes that many don't expect a woman to follow through on, among others. The film shows first-person perspectives of sex and assault that in the hands of a man would be criticized as sexist and misogynistic, but with Bigelow, they're never solely gratuitous. She utilizes them for us to empathize with the seductiveness of such contraband, the excitement of its possibilities, and the danger and ruthlessness of the film's villain. Roger Ebert is spot on when he says the film's Point-of-view (POV) shots "force" us to inhabit the film's realities, which is really what a good movie is supposed to do. And its this willingness by Kathryn Bigelow to plunge headlong into this cyberpunk world that underlines her fearlessness, despite the sexual politics involved.

It's not only Bigelow's stylings that are interesting, but also her character development. As mentioned, her protagonists don't easily fit into categories. Lenny and Mace at no point in the entire film, become cliches. Lenny's snakelike salesmanship masks an emptiness that few film heroes are willing to show. When Bigelow shows how Lenny looks when he is viewing his SQUIDS, he looks pained and uninhibited, but he is meant to look so as to add pathetic and disturbing dimensions to his character, and show how deplorable his trade is. Mace on the other hand, isn't simply a musclebound amazon. Bigelow somehow manages to showcase her with genuine femininity, and an almost maternal concern for Lenny. When she yells "Right here! Right now!" you know exactly what she's talking about. Together, Ralph Fiennes and Angela Bassett are the film's soul. 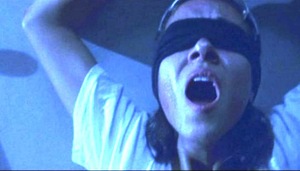 Being a rocker herself, Juliette Lewis also lends the film authenticity with her usual raw and edgy performance as Faith. I don't think there are any Hollywood actresses today, other than Charlize Theron, who are capable and willing to lay themselves bare on a consistent basis the way Juliette Lewis did in her prime.

It's a shame that the film has some obvious weaknesses. Its dialogue feels too polished for its setting. Its costume design a bit too grungy, and its third act, though expertly shot, is a mess plot-wise, with intended parallels to Rodney King feeling forced and unnecessary. James Cameron is a skilled storyteller, but not a great writer. Of course, with some of these arguments, hindsight is 20/20. And to give some credit, the idea of a rapper's killing with immense distrust of the police, became prophetic with the death of Tupac Shakur. 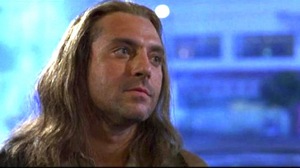 But despite its flaws, what makes "Strange Days" worth seeing is its devotion to its characters, its remarkable use of POVs to create its consistent atmosphere of apprehension and excitement, and most of all, its fearlessness. We see Kathryn Bigelow trying out new tricks, reversing sexual roles, confounding expectations, and going all out. It wasn't perfect, but it was never boring, and a pleasure to see.