The hero of Paul Schrader's “Affliction” knows how messy his life has been, but tragically lacks the perspective on what has made him so miserable and pathetic throughout his existence. He wants to believes that he is a good man trying his best, but is actually a wretched creature of violence, driven by his worst impulses. Watching him pushed into more misery and despair by his destructive mindset is akin to watching the slow but inevitable progress of a catastrophe bound to happen.

After taking us to a small remote town in New Hampshire during its late autumn days full of snow, "Affliction" sets its cold, phlegmatic tone with the opening narration by one of the supporting characters in the film. He is Rolfe Whitehouse (Willem Dafoe), and his calm voice begins the story with a prelude for the eventual downward spiral of his older brother Wade Whitehouse (Nick Nolte), who has been more or less an inconvenient wraith for Rolfe and others who knew him since a series of incidents depicted in the story.

When we see Wade for the first time, he is with his young daughter Jill (Brigid Tierney), driving her to a Halloween event to be held in the town hall. On the surface, he simply wants to have a nice week with a daughter he has not seen often since a divorce with his ex-wife Lillian (Mary Beth Hurt), but the strain between Jill and Wade is evident from their awkward interactions. Disappointed about her ruined Halloween evening, Jill is not that eager to join the event, but he does not listen to her at all, stubbornly insisting she should have a good time. Sure, he wants to be a good dad, but we see more of what a lousy father he is as his clumsy efforts and impulsive responses make his daughter more guarded and nervous. Wade only finds himself baffled by how things could go so wrong, in spite of his good intention.

After this disastrous evening, two more incidents cause trembles in Wade’s drab, daily life. An important union guy comes to town for some hunting with his guide and is shot and killed in a nearby forest. Everyone thinks it is just an unfortunate accident, but Wade, who works as a town police officer besides being one of the employees of a local businessman named Gordon LaRiviere (Holmes Osborne), does not feel right about the incident. Because there are some people who are going to benefit from that guy’s death, it may not have been an accident. Wade becomes more suspicious of not only his boss but also his close colleague Jack Hewitt (Jim True-Frost), who was the dead man’s guide and is the sole witness of whatever really happened in the forest.

As Wade’s obsession with the incident grows, the movie looks closer into his disturbed state of mind. It also clearly shows us why the adapting writer/director Paul Schrader was drawn to Russell Banks’s novel of the same name on which his movie is based. Like many of Shrader’s memorable protagonists such as Travis Bickle in “Taxi Driver” (1976) and Frank Pierce in “Bringing Out the Dead” (1999), Wade is a walking mess brimming with anger, frustration, alienation. How Wade doggedly delves into the incident is not so far from how Bickle maddeningly pushes himself toward his deranged goal, or how Pierce relentlessly hurls himself into his demanding job. Regardless of whether there is really any chance of proving his theory is right, Wade becomes more single-minded in his warped pursuit of justice and redemption. Ironically, this fuels his worst sides, making him all the more distant to others around him.

Through another incident of death, the movie also observes the deep origin of Wade’s personal demons. When he and his current girlfriend Margie Fogg (Sissy Spacek) drop by his family home where his parents are still living, he is shocked to discover that his mother was left to die alone in her cold bedroom while forgetfully neglected by his alcoholic father Glen (James Coburn). Morosely mired in guilt, self-pity and alcohol, Glen does not have anything nice or consoling to say when his surviving children gather for their mother’s funeral later. Neither do his children, who are still not comfortable to be around this mean, hateful old man whose alcoholic rage frequently terrorized his family in the past. Although he does not like his father, Wade feels obliged to take care of Glen, and it looks more apparent to us that he resembles his abusive father far more than he admits. 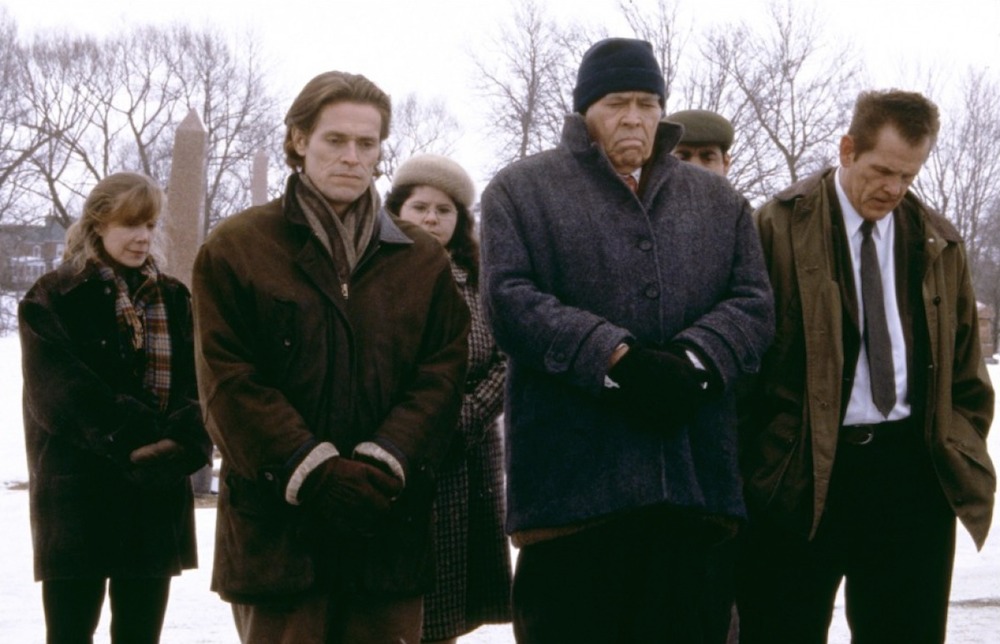 You will not be surprised to learn that Banks dedicated his novel to his working-class father whom he both loved and resented. While there were good times between him and his father during his childhood years, his father was also a violent drinker, a constant threat to his family before he deserted them when Banks was 12. Like the hero of his novel, Banks found himself growing up to be a man not so different from his father, but he eventually followed his interest in literature and then started his writing career. The novel is not exactly autobiographical, but it often feels like Banks’s personal healing/exorcism process as indirectly reflecting that complicated love-hate relationship between Banks and his father in real life, who became a little closer to his son during his later years but never fully acknowledged the damages he inflicted on his family.

Faithfully adapting Banks’ novel, Schrader also sticks close to its bleak view on domestic strife and violence, which is further emphasized by the snowy desolate background reminiscent of Atom Egoyan’s “The Sweet Hereafter” (1997), which is incidentally based on Banks’s another famous novel and partially overlaps with “Affliction” in their several common subjects. Through the plain, shabby looks of the town, the movie subtly conveys to us the sense of lifelong disappointment and frustration surrounding its town characters, and we come to sense that most of them are destined to be stuck there for the rest of their uneventful life like Wade or Jack. According to himself, Jack could have enjoyed a nice professional sports career out there if he had been luckier several years ago.

While working as an icy, meditative character study, the movie constantly pulsates with Nick Nolte’s penetrating Oscar-nominated performance, which is still one of the best moments in his bumpy but impressive career. Though he has gained considerable notoriety due to his many wild behaviors in public, it is undeniable that Nolte is a talented actor who is always good at embodying flawed or troubled human characters with personal darkness as shown from “The Prince of Tides” (1991), “Hulk” (2003), and “Warrior” (2011). His work in “Affliction” is captivating to watch for his subtle touches as well as the growling intensity below the surface. Behind Nolte’s blunt, squared-jawed face, we see a man slowly imploded amid accumulating anger and confusion. Nolte has a brief but harrowing scene when his character happens to get a quiet private moment of self-reflection later in the story. As reflected by his worsening dental condition, Wade feels more of something rotten inside himself, but, unlike his annoying tooth, the source of his discomfort remains elusive to him while he wonders about the man in the mirror he is looking at.

As Wade’s monstrous father, James Coburn is Nolte’s equal acting match during their intense scenes, and he gives an unforgettable supporting performance both towering and malicious. Schrader sometimes utilizes Coburn as a domineering presence to oppress Nolte on the screen, and Coburn’s imposing physical appearance, which is as bulky as Nolte’s, surely enhances that intended effect. When he was told that he had to be prepared well before shooting his scenes, Coburn promptly replied to Shrader that he was ready for the task (“Oh, you mean you want me to really act? I can do that. I haven’t often been asked to, but I can.”) Coburn deservedly won an Oscar for one of a few high points during his final years.

Other few substantial supporting characters in the film mainly function as the observers who look at Wade from outside with concern or disgust. Sissy Spacek and Mary Beth Hurt are two women in Wade’s life, and their characters respectively provide small but crucial female perspectives from their contrasting positions. Both of them know Wade better than himself, and they try to deal with him in their own way. But they all are progressively frustrated with him, pushed away by his dark nature, and so is Wade’s daughter (Brigid Tierney is wonderful in her character’s passive attitude which barely masks her uneasiness at her father).

Steadily maintaining his mild emotional detachment in contrast to the intense acting of his two male co-stars, Willem Dafoe quietly stays around the fringe of the story as a man who may be as tragic as his older brother. While leaving behind his hometown and family and then entering his academia world a long time ago, Rolfe sets himself apart as a detached chronicler of his family history. There is a sad, bitter moment when he and Wade talk in private about one particularly traumatic moment during their childhood years. They are surprised and amused to see how differently they remember it, which may tell us a lot about how much they were damaged by their father in the name of ‘tough love’—or how much Rolfe has distanced himself away from a part of his life, perhaps.

One of the best works in Schrader’s career, “Affliction” is a darkly powerful, human drama with sharp, sobering insights on that virulent and stubborn cycle of domestic violence. We all have heard about how some victims of domestic violence grow up to be monsters who infect their own flesh and blood with a virus called violence just like their victimizers. The tragic story of “Affliction” gives us some understanding of how hard and difficult it is for such people to break away from their toxic inheritance. Wade does try, but his father’s festering legacy has already been in his blood for a lifetime.