Everybody knows one another in the Town 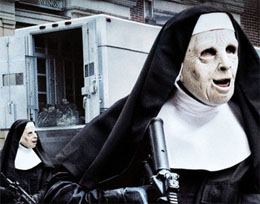 Ben Affleck's "The Town" (2010) is an impressive effort from a third time director whose acting choices almost derailed his Hollywood career. With the clear exception of "Changing Lanes" (2002), this film is better than everything he ever did before and the reason is simple: instead of choosing to be involved in another blockbuster wannnabe, Affleck wrote, directed and starred in this heartfelt project about a fascinating borough that he seems familiar with. It is also a work of numerous, obvious inspirations, raising the question of whether said fact makes it any less worthy.

"The Town" deals with a tightly knit group of criminals from Charlestown, a section of Boston renowned for housing several generations of bank robbers. Everyone there knows each other and they all seem aware of what their neighbors have been up to lately. There is a small scene that perfectly illustrates the unusual attitudes toward crime within this community: when the FBI man in charge of the investigation (played by Joe Hamm) tries to unnerve the leader of the group (Affleck) with tales about the horrendous experiences he'll have to face in prison, his reply is aimed at Hamm's second in command (also from the area) played by Titus Welliver, but instead of coming up with the expected snappy answer, he simply shames him for betraying his own people by standing on the side of the law.

Our gang consists of leader Doug MacRay (Ben Affleck), his hot headed buddy James Coughlin (Jeremy Renner), getaway driver Albert Magloan (Slaine) and tech specialist Desmond Elden (Owen Burke). Affleck spends a considerable portion of the film depicting their deep loyalties towards one another and the hard decisions their kinship forces them to make. Much as in "The Departed" before them, we come to understand the pressures on these "Toonies" of Irish descent to remain in a life of crime, in this case by an apparently simple florist/mobster named Fergie Colm (Pete Postlethwaite) who provides them with information about potential hits in return for a piece of the action.

"The Town" was mostly promoted as a heist feature but at its core this is an intimate story about two people, each of whom just happens to be the last person on earth that the other should be seeing. Claire Kessey (Rebecca Hall) was held hostage by the crew during one of the jobs, making her the one witness that can place them in the scene of the crime; by unwittingly dating one of the suspects, she could end up becoming one as well.

This section of the movie is reminiscent of John Badham's "Stakeout" (1987) as Doug (like Richard Dreyfuss before him) can't resist falling for the woman he's only supposed to be watching. Affleck's biggest achievement is making this relationship work while convincing the audience that they should remain together, despite the extreme circumstances that dictate the opposite; this was surely the most crucial aspect for the movie to work. Eventually we'll have the obligatory sequence where Claire learns the truth about Doug and angrily demands for him to leave, but this (otherwise) standard material and the mayhem that ensues, have a ring of truth to them because the script does not shy away from showing the damaging consequences to their choices. Think of the scene where Claire asks Doug how she'll ever know if he's telling the truth and just when we expect him to try to soften things up, he replies in a fact of the matter way: "because when you hear my answers, you'll absolutely hate them".

The main influence to "The Town" is obviously Michael Mann's "Heat" (1995). This is not said as to belittle it in any way but instead to point out that every bank heist feature that comes along has to be compared to that genre's pinnacle. Much like Mann before him, Affleck has clearly done his homework on the technical intricacies behind the caper scenes and he shows considerable craft. The three set pieces are all exciting and increasingly complex.

I do question however if wearing flashy masks (a la "Point Break") wouldn't be an unnecessary way to attract unwanted attention (I doubt DeNiro's Neal McCauley would have ever done something of that nature) and besides, when a situation arises that one of the leads has any kind of interaction with the victims during the robbery scene, the masks make it impossible to know who exactly we are dealing with or to care very much about the outcome. I also have a hard time understanding how, after robbing two banks and six armored trucks, none of the men in the gang seem to have benefited much economically (Doug remains doing hard work at a quarry). My guess is that the scenes where they are shown living their lives well-off must have been deleted from the longer version of the movie.

Just like "Heat" before it, Affleck's film gives equal attention to the cops and robbers as well as their loved ones who pay a price for their actions. We come to understand the difficulties that the law enforcers face in bringing down a gang of suspects who've grown up accustomed to being followed ("we'll never get 24 hour surveillance unless one of those idiots converts to Islam!") and how far from they have to go in "shaking the tree" of anyone who might provide them with a lead.

There are several scenes reminiscent of Michael Mann's masterpiece such as the surveillance sequence where the criminals are seen enjoying a family day as the agents take photos from nearby and describe their résumés out loud. We also have here the similar moment when an addict (played by Blake Lively) has to betray a loved one or otherwise risk losing her baby to foster care (even when in her case, it would seem like the best possible outcome for the poor infant). Moreover, there's the requisite unstable character from most movies of the genre (played Jeremy Renner) that's indispensable in making sure his buddies (along with the audience) never get too comfortable. We've all seen this material before but the film's main focus is how these men yearn for their parents lost to a life of crime and their resignation to a similar fate as something normal to be expected from having been born in a place like Charlestown ("We'll meet again, at this side or the next").

My main complaint about the movie has to do with Affleck's insistence in making sure his character never look like a bad guy in any way (much like Kevin Costner's in "A Perfect World"). We never see Doug hurting anybody who didn't have it coming or even hitting any police officers with the countless rounds of ammunition he shoots at them. Affleck should have remembered DeNiro's character in "Heat" and realized how, despite leaving several dead innocents in his wake, the audience had grasped the tragedy behind his inability to change.

Doug's circumstances put him in a similar position where he could have acted more believably without losing any sympathy; instead, sometimes he seems too nice to belong to this group of criminals. It doesn't help matters that Affleck tends to overdo the loving close ups of his character and, as a result, I can't watch his final shot by the side of a river without recalling another film's directorial self-adoring ending, the one where Nick Nolte uttered the words "Lowenstein!, Lowenstein" under the light of an equally lovely sunset ("The Prince Of Tides", 1991).

During the last act Ben resorts (not too subtly) to Frank Darabont's "The Shawshank Redemption" as he shows Claire finding a crucial package left by his character (remember Morgan Freeman and the "rock that seemed to have no business being there"?). Doug ends up escaping to a paradisiacal destination of his own where he'll happily spend the rest of his life in a scene that is reminiscent of Shawshank's arrival at the Pacific Ocean that "Mexicans say has no memory." Eventually we are left wondering how he'll ever able to afford his new, incognito life style when he supposedly left Claire the loot from the final job but again, this explanation must have also been left in the editing room's floor.

All these similarities to prior features raise the question of just how worthy "The Town" can be. There are several comparative examples that come to mind such as "Avatar" which a friend of mine downplays by calling it "Pocahontas" meets "Dances with Wolves". We also have "Minority Report" which is, of course, a futuristic rendition of "The Fugitive" and let's not forget Pixar's "Bugs", a small world version of "The Magnificent Seven" which in turn was a Western interpretation of "The Seven Samurai", and so forth. Point being: after a century or so of movie making, few films today can claim to be thoroughly original. What's most relevant about our particular case is that, regardless that many of the elements used in "The Town" are like musical instruments that have been executed before, Affleck does a very good job of playing them himself and displays enough talent for us not to be surprised now about all the recent talk surrounding "Argo," his latest and much praised project.