“Pocahontas" is the best-looking of the modern Disney animated features, and one of the more thoughtful: It is about real issues, even if it treats them with naive idealism. In its view, Native Americans lived in peaceful harmony with nature until European settlers came, bringing guns and ecological destruction. The Europeans, puffed up with their notions of civilization, did not realize how much they had to learn from the Indians.

Midway through the film, after Captain John Smith (voiced by Mel Gibson) has thoughtlessly dismissed the ideas of the young Indian woman he loves, Pocahontas asks: "If the savage one is me, how can there be so much you don't know?" Then follows a musical sequence during which Pocahontas (Irene Bedard) takes Smith on a whirlwind tour of the forest. Because this is a Disney picture, the animals are of course all friends of the Indian maiden, who snatches a cute cub away from a mother bear - something that even my own limited woodcraft suggests is not prudent.

The message of "Pocahontas" is that arriving settlers despoiled the forests and imposed their own version of civilization, whether or not it was wanted. Governor Ratcliffe (David Ogden Stiers), the blustering leader of the Virginia Company, is shown gleefully using cannons to level forests. And when the settlers open fire on the Indians, they retaliate by capturing John Smith and then prepare to execute him. Only Pocahontas, who can empathize with both sides, can save the day.

"Pocahontas" is based on myth, not history. In real life, Pocahontas was 11 or 12 when she first met John Smith (who claimed in his journals that his life was saved no less than three times by women who loved him). The Englishman she married was John Rolfe. She did indeed get to go to England, where she was feted as a princess.

She died in Europe, at about age 21. The son she had with Rolfe became one of the richest of early American settlers, and his descendants still thrive.

Having led one of the most interesting lives imaginable, Pocahontas serves here more as a simplified symbol, an Indian maid who falls in love with a dashing blond hero, saves his life, and brings about a peace between her people and the European visitors.

The dramatic challenge in the movie (as it is in "The Little Mermaid") is that her father disapproves of the man she loves, because he belongs to a different race. He wants her to marry a member of the tribe, whom she dislikes because "he's so . . .

serious." When her intended is shot dead by a young British soldier and Smith is taken prisoner, her immediate thought is, "I'll never see John Smith again!" So much for any lingering regrets over the dead fiancé.

The movie hurries on to the big picture, which is that Pocahontas, raised in communion with nature, can help John Smith free himself of the moral constipation of European civilization. "You can't step in the same river twice," he learns, and "listen with your heart, and you will understand." Since these lessons are taught by an Indian maiden with a waist-length mane of black hair, an hourglass figure and a Playmate face, John Smith's heart finds it easy to listen, and soon he is singing a hymn to the new land. (He does not, however, sing a love duet with Pocahontas, because the romantic theme "If I Never Knew You" was cut from the movie, reportedly because the kids in test audiences found it boring. Without such a transition, their relationship emerges rather abruptly.) What is especially good about "Pocahontas" is the artistry of the animation. The big picture - the new land of towering forests, sparkling streams and rugged cliffs - is drawn with a freedom and energy that has real power. And, as in "The Lion King," the landscape includes a precipice from which the characters can survey their domain - a rock jutting out into the sky, making an ideal pulpit for sweeping sentiments.

The weakness of the movie is its lack of a colorful villain.

After Scar in "The Lion King" and the fearsome Beast in "Beauty and the Beast" (not to mention the jealous undersea denizens of "The Little Mermaid" and the scheming Jafar of "Aladdin"), the bad guys in "Pocahontas" seem pretty nice, really. Ratcliffe, the leader of the expedition, is shown more as a buffoon than a villain. The soldier who kills Pocahontas' fiance immediately regrets his error. The other British soldiers are essentially members of the chorus. And the Indians are all, of course, noble to one degree or another.

That leaves only the concept of misunderstanding as the real villain - and after Pocahontas helps the two sides communicate, there is no more dramatic tension. The film's ending is rather weak, too. After Smith describes the glories of London to Pocahontas and her eyes sparkle, she decides after all that her place is "here, with my people" and there is a bittersweet conclusion as she watches Smith's ship sail back to the Old World. I knew Pocahontas visited Europe in real life, and was hoping the movie would get her there, too; the ending came as an anticlimax.

All of these problems make "Pocahontas" less entertaining than it might have been, and the comic relief - the cute raccoon, the hummingbird and the governor's dog - seem obligatory after the similar creatures in the other modern Disney cartoons. What's left is simply the grandeur of the New Land, which tends to ennoble all of the characters. Drawn with true artistry, and evoked in musical sequences like "Just Around the River Bend," this vision is the true star of the film, and its spirit is evoked by old Grandmother Willow, a tree that gives Pocahontas a lot of sound advice.

The film looks great, the songs are wonderfully visualized, and the characters are appealing. "Pocahontas" is just fine as family entertainment. But on a list including "Mermaid," "Beauty," "Aladdin" and "Lion King," I'd rank it fifth. It has a lot of good intentions, but a severe scoundrel shortage. 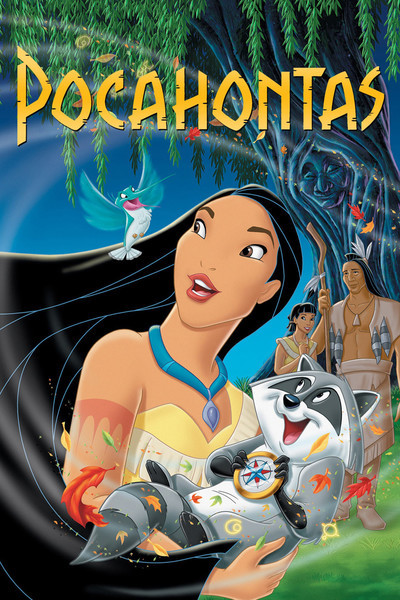