John Carpenter's "Escape from New York " (1981) is often referred to as a cult-classic. I've never been quite sure the kind of criteria anyone would base this kind of statement on, but here is a feature that certainly generated buzz when it came out some three decades ago. It belongs to the time period when movie computers consisted of giant consoles covered with lights of all colors that blinked on and off endlessly. When I first saw it during my teen years it left quite an impression, though recent viewings have not been quite as kind, as it hasn't aged particularly well. We often complain about the recent explosion of remakes of entries that are barely 10-20 years old (or less!) but I believe a new version of "Escape from New York" could make for a welcome exception.

The film has one of those larger than life, preposterous premises that make for great cinematic material. In the "year of the future 1997" crime has increased in the U.S. by 400%, forcing authorities to turn Manhattan into the nation's sole penitentiary by erecting a giant wall that reaches crosses the East and Hudson rivers and rests on the Jersey, Brooklyn and Queens fronts (building it around the island itself would've surely been much easier, but it wouldn't have looked half as good as it does here). The prison's motto is simple: once you get in, you never come out. Perhaps it would have also been a good idea to move the Statue of Liberty anywhere but in front of the world's largest penitentiary, but I suppose the filmmakers still needed it there to give their poster an apocalyptic look, in tune with the "Planet of the Apes" ending (curiously, the Liberty Island scenes were the only scenes actually filmed in N.Y.C.; the rest were shot in a section of East St. Louis, Il).

"Escape from New York " starts with a night in the life of the prison as some fugitives try to escape on a raft and get blown to smithereens. We then get the sight of Air Force One (a rather cheesy special effects version) being hijacked and crashed into the lower part of the island. A nameless U.S. President (played by Donald Pleasence) manages to escape in one of those cinematic ejecting chambers (similar to the one used years later by Harrison Ford as the President). It isn't long before a group of prisoners decide to abduct Pleasence and send authorities his severed finger as proof of capture (Presidential ring included!). Warden Hauk (played by Lee Van Cleef) decides to recruit the prison's most recent inductee, enigmatic ex-war hero and now felon Snake Plissken (Kurt Russell) by offering him a full presidential pardon (who knows when the President signed it, considering that he's been quiet busy so far) in exchange for a successful rescue mission The only catch here is one of those requisite movie deadlines to make things more interesting, which allows for the typical line of dialogue that sounds great on the trailer: "You have 24 hours to go in and out of there!" Plissken is eventually assisted in his quest by a taxi driver, appropriately named Cabbie (Ernest Borgnine), the standard movie prison veteran well aware of the place's goings-on (much like Brooks in "The Shawshank Redemption") along with Brain (Harry Dean Stanton) and Maggie (Adrienne Barbeau), two other prisoners whose heroic motives are never made very clear. 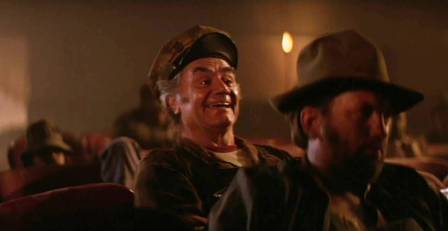 The movie does a rather good job of visually establishing its location through a couple of convincing matte paintings that eerily display the city in complete darkness (done by a young James Cameron, by the way) plus a few models that allows us to believe that Plissken is actually arriving in NYC. Unfortunately, as the movie progresses the magic is completely gone. This has to do mostly with the fact that the world's best known city is represented through a series of 2- and 3-story, run-down buildings, while too few of its famous landmarks are portrayed convincingly. Case in point: by film's end we are supposed to believe that a small building complex represents the lower floors of the World Trade Center. It might be unfair to compare "Escape from New York" visuals to those in a more recent feature like "
Advertisement
I Am Legend," the unremarkable Will Smith vehicle that nonetheless dealt convincingly with an ominous NYC of the near future thanks to modern technology, but even "Beneath the Planet of the Apes" (1970) did a better job of making us feel like we were actually there. "Escape from New York" was obviously a low budget film, too low for such an ambitious project.

Even within such a far-fetched story, absurdity stands out. Russell is ordered to land his glider on top of the WTC with the idea of avoiding being noticed by other prisoners, but somehow he decides that the best possible route there includes flying it in plain view through the canyons of the nearby buildings, and then straight up in a trajectory parallel to the Twin Towers façade (an inexplicable decision that looks extremely cool anyway). Additionally, Carpenter doesn't seem to have spent much time going through the basic intricacies involved in turning NYC into the world's largest prison; case in point: if there are no visiting days and no one is ever getting out of there, what's the point then of mining the bridges instead of simply blowing them away? How are the prisoners fed? And more importantly, where do they get the fuel for their army of gas guzzlers?

Perhaps the film's weakest link is the casting of Kurt Russell as Snake Plissken. Russell has always been at his best in movies about everymen stuck in extraordinary situations ("Breakdown," "Executive Decision," etc.) but I don't really think he makes for very good anti-hero material. Russell spends a good deal of the movie doing his best Clint Eastwood sarcasm-dispensing impression (including the constant display of his lower teeth, in Dirty Harry fashion) but he seems much too nice for the role, his clothes seem too new and his hair too recently shampooed to give the impression of being a true hell-raiser. Besides, the script doesn't give him anything terribly interesting to do except for running away from his enemies, rescue a President with whom he never develops any kind of relationship, and getting into a colorful (but badly choreographed) fight with a bald giant.

In a nutshell, John Carpenter's "Escape from New York" has a fascinating premise but its characters are hardy developed, the action isn't particularly spectacular and its setting seldom rings true. Strangely enough, the film's cult-classic status may derive from other factors such as having been made by the same director who gave us "Halloween"; co-starring the guy who played "Shaft" Isaac Hayes and, more importantly, encompassing several colorful genres. In addition to being an action-adventure movie, "Escape from New York" temporarily becomes a zombie flick of sorts, with the prison's lower ranks known as "the Crazies" coming out of holes and drainage to mindlessly attack the heroes. Later on it becomes a mini version of "
Advertisement
The Warriors," dealing with the colorfully dressed gangs who kidnapped the President, and near the end it even gets to become a gladiator movie for a while.

According to Wikipedia, "Escape from New York" was written by Carpenter in response to the Watergate scandal. It's hard to see much of a connection in the final product except when eventually the President turns out to be a weasel and Plissken the hero who beats the establishment with the help of an audiotape (no less!). Curiously the movie was released around the same time as "Blade Runner," a prime example of a futuristic, apocalyptic feature and although "Escape from New York" doesn't belong at the same level, it has some terrific ideas and passes the following three tests that suggest it might just make a worthwhile remake: #1 There's plenty of room for improvement, #2 Newer technology could solve some of the original entry's shortcomings and give Snake a better playground where he could do more interesting things, and, more importantly, #3 Most of today's viewers have never seen the original so the premise will seem fresh to many (unless they turn it into another "White House Down" of course).