I love the camaraderie between our Contributors here at RogerEbert.com, and their completely unscripted exchanges can be fascinating. Someone may introduce an unexpected topic and the others riff on it until it becomes quite comical or maybe even illustrative. Today is the Chinese New Year, which according to our Far Flung Correspondent Jana Monji, is the Year of the Red Fire Monkey. In celebration of that, Jana has invited our contributors—including Matt Fagerholm, Donald Liebenson, Nell Minow, Michael Mirasol, Lisa Nesselson, Peter Sobczynski, Susan Wloszczyna—to discuss films with simian themes.—CHAZ EBERT

The year 2016 is the Year of the Red Fire Monkey. For the Chinese, the New Year officially begins on February 8th, 2016 (which happens to be my wedding anniversary). Because of the recent death of Natalie Cole, my theme for the year is the 1943 song written by Nat King Cole and Irving Miles that was on Natalie Cole's 1991 "Unforgettable...with Love" album: "Straighten Up and Fly Right."

According to Wikipedia, the song is based on a black folk tale that Nat King Cole's father used as part of his sermons. In the story, a buzzard has found a way to make an easy meal. He takes different animals up for a joy ride and then lets them fall to their death. In the song, we have a monkey who has caught on to this scheme and wraps his tail around the buzzard's neck. The lyrics are as follows:

A buzzard took a monkey for a ride in the air

Monkey thought that everything was on the square

The buzzard tried to throw the monkey off his back

But the monkey grabbed his neck and said "Now listen, jack"

"Straighten up and stay right

"Cool down papa, don't you blow your top

"What's the use of jivin'

"Cool down papa, don't you blow your top."

The buzzard told the monkey "You are chokin' me

"Release your hold, and I will set you free"

The monkey looked the buzzard right dead in the eye

And said, "Your story's so touching but it sounds like a lie"

Straighten up and fly right

Straighten up and stay right

Straighten up and fly right

Cool down papa don't you blow your top

The song was used in the 1995 HBO drama "The Tuskegee Airmen" and in the 2004 biopic about Ray Charles "Ray." According to "Secrets of Mental Marksmanship," the song's title "Straighten up and fly right" became the motto for the Tuskegee Airmen. So for the Year of the Monkey, I'd like to add these two movies to my list.

If you see various depictions of the Monkey holding a fruit, that might be related to an Asian folk tale about a monkey and a crab. In the tale, a monkey trades the crab something edible (a rice ball or rice cake) for a persimmon seed. The crab takes the persimmon seed and plants it. Eventually a beautiful persimmon tree grows, but the crab cannot pick the persimmons. The monkey picks the persimmons but tries to keep them for himself. The ending varies from the crab being killed and then the monkey being killed in revenge or the crab getting the upper hand. In this case, the monkey is the dishonest one.

While I know there is a difference between monkeys and apes, the original Japanese and Chinese bunched them together so I will include movies with both. My list of movies for the Year of the Monkey are (in alphabetical order):

What are your favorite monkey movie moments? When the writers for RogerEbert.com got that question, here’s how they responded. 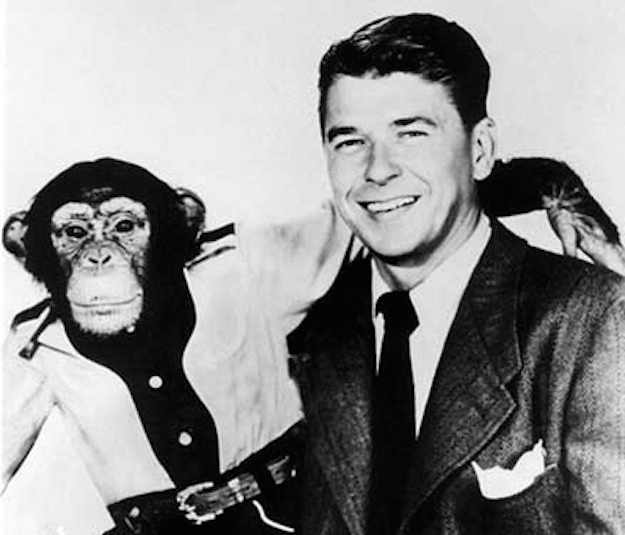 “Bedtime for Bonzo,” with quite a lovely performance by Diana Lynn co-starring with our former President. And don’t forget the crucial role of the monkey in “Raiders of the Lost Ark.” And though no actual monkeys are involved, both very different but very funny movies called “Monkey Business,” one with the Marx Brothers and one with Cary Grant, Ginger Rogers, and Marilyn Monroe.

Any time one can include Cary Grant on a list is well worth it!

Cheeta – or Cheetah – the chimp who was in the Johnny Weissmuller Tarzan movies – a very good reactor to whatever jungle nonsense occurred.

I think of Cheeta from the (1966-1968) TV series which I saw in re-runs (and is apparently currently playing on Saturday mornings according to Wikipedia), but I then get distracted by the image of Ron Ely in a loincloth.

The scene in Allan Dawn's lovely 1937 Shirley Temple vehicle, “Heidi,” where a monkey wreaks havoc made me laugh uproariously as a kid, and it still does (I re-watched it on New Year's Day this year). Dressed to entertain, the monkey springs into Shirley's snooty Frankfurt prison and livens everything up—that is, until the evil Fraulein Rottenmeier (what a name!) orders it to leave. Instead, the monkey climbs up on a chandelier and starts hurling candles at everyone's head. Trusty butler Andrews (the wonderful Arthur Treacher) climbs onto a table to fetch it, an ill-fated plan thanks to a poorly placed vase. It's a slip-on-a-banana-peel pratfall for the ages.

I love that name Rottenmeier and now I need to watch Arthur Treacher as a butler and not someone advertising fish and chips.

“Every Which Way But Loose” and, to a lesser extent, “Any Which Way You Can”

The first cinema simian who popped into my head was Mr. Stubbs, the chimp who was Toby Tyler's best friend in one of the late Kevin Corcoran's best Disney movies. When he was accidentally near-fatally wounded by a hunter, it was more traumatic than the death of Bambi's mother. 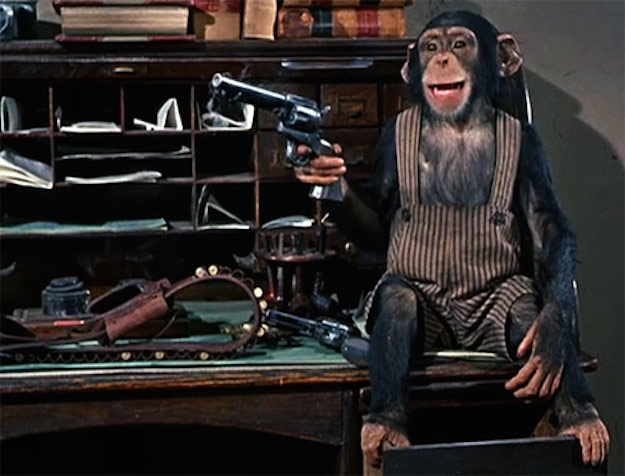 On a lighter note, there's "Road to Utopia," in which Bing loses out to a organ grinder's monkey in a cruise ship talent contest. Hope's response: "Next time I bring Sinatra.”

"More traumatic than the death of Bambi's mother"?!

I don't know if I could watch that.

Sign me as still traumatized by the death of Bambi's mother and the shooting of Old Yeller.

Just wondering, should this plot development give rise to a “Spoiler Alert”?

Only if you add spoiler warnings to every movie involving World War II since it ended three years after Bambi came out.

A fair question, that.

This was a semi-private correspondence among a knowledgeable film community so I thought there would be nothing untoward in talking about Bambi's mom. But I would not have included that devastating spoiler in something I posted on Roger Ebert.com. I'm a bit of a stickler on this: You can only see a movie for the first time once, so I would not spoil for future viewers the meaning of "Rosebud," Janet Leigh's fate in "Psycho" or whether Dalton prevails over Brad Wesley in "Road House."

As a rule, unless it involves little kids, I generally figure that after the half-century mark, spoilers have already been spoiled.

You raise an interesting concept. But is "the half-century mark" the proper time limit? I'd say it's ok to assume that 'everybody' knows that Abe Lincoln was fatally shot while attending a play but does 'everybody' know whether Cary Grant and Deborah Kerr kept their date at the Empire State Building in "An Affair to Remember?”

I don't think the world's future moviegoers should be penalized for having been born too late. They should be allowed to see a film unspoiled. 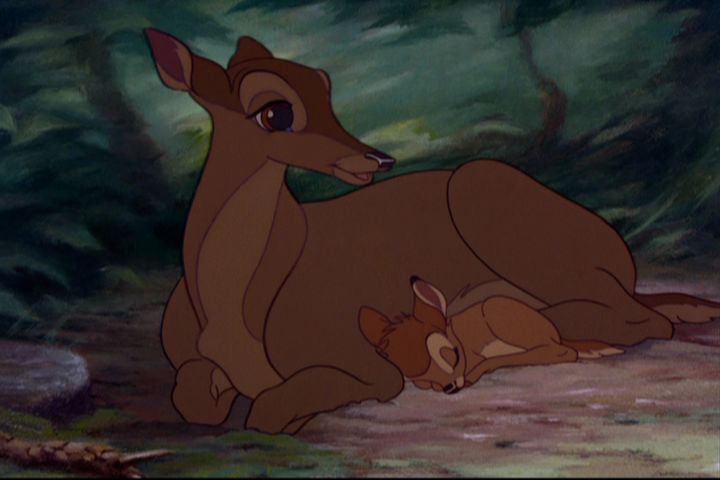 when she sets out to take that there shower

who expires with toys on his brain

In the forest they sound the alarm

If Olivier's fiend drills your tooth

Serves you right if you give away "Sleuth"

'Cause the worst thing a critic can do

is assume folks have seen the film, too...

This will be brief without being curt.

I love your poem 'bout the spoiler alert.

I have felt this way since I was a boy

When an exiting filmgoer ruined my joy.

Discussing the flick I was in line to see.

Revealing the ending; quite thoughtless was he.

"I knew all along," he said to his friend,

"That they were on Earth!" So I then knew the end.

So that's why online, on air, or in print.

When it comes to spoilers; I give nary a hint.