Any Which Way You Can

Clint Eastwood's "Any Which Way You Can" is not a very good movie, but it's hard not to feel a grudging affection for it. Where else, in the space of 115 minutes, can you find a country & western road picture with two fights, a bald motorcycle gang, the Mafia, a love story, a pickup truck, a tow truck, Fats Domino, a foul-mouthed octogenarian, an oversexed orangutan and a contest for the bare knuckle championship of the world?

The movie seems designed as a free-association exercise involving all of the above elements, in no particular order. That gives it a certain clarity of form. It opens, for example, with a bare-knuckle fight between Eastwood and someone else (Who else? Doesn't matter). While Eastwood is slugging it out, his highly intelligent orangutan, Clyde, is relieving himself in the front seat of a state police car. And somehow we know-never mind how, we just know-that one of the reoccurring themes of this movie is going to be Orangutan Crap In Squad Cars. We are correct. It's that kind of movie.

After the big fight, Eastwood returns to his home, which seems to be an Okie hovel somewhere in a large Western state. He still lives with Ma, played by Ruth Gordon as a cross between Ma Kettle and Ma Barker. Clint and his partner, Orville Boggs, spend all day hard at work banging on things with wrenches.

Occasionally Clyde amuses himself by ripping apart old Mercurys with his bare hands. Then the Mafia decides to set up a bare-knuckle fight between Eastwood and the defending eastern champion, a guy named Jack Wilson.

It was to my immense delight that I immediately recognized the actor playing Jack Wilson. He was William (Big Bill) Smith, who played a lot of motorcycle gang leaders in films of the late 1960s, and still looks as fearsome as ever. He and Eastwood meet while out jogging one morning, and then he falls off a cliff and is rescued by Eastwood, after which he beats up a lot of guys who insult Eastwood's girlfriend in a bar. All in a day's work.

The girlfriend is played by Sondra Locke, who was also in "Every Which Way But Loose," the prequel to the present film. You gotta give Eastwood and Locke credit. Unlike Burt Reynolds and Sally Field, who spent the first half of "Smokey and the Bandit, Part Two" holding a deep, Interpersonal philosophical argument about the issues raised by their relationship in "Smokey and the Bandit, Part One," Eastwood and Locke don't agonize over their reunion. Two minutes after their reunion in a country & western bar, Locke is being consoled by Eastwood's orangutan. Ten minutes later, they're starting a riot at the YWCA. It's that kind of movie.

Anyway, the Mafia kidnaps Sondra Locke in order to force Eastwood to fight. Then Big Bill Smith and Eastwood wipe out the Mafia, but decide to fight anyway. It is some fight. It's one of those-brawls where every time somebody gets hit on the chin, it sounds like they're beating the hell out of a Naugahyde sofa with a Ping-Pong paddle.

If we had any slight lingering doubts that this was a Clint Eastwood movie, they are dispelled when Eastwood breaks his right arm during the fight, gets up off the floor and growls, "It's not over yet."

In addition to the orangutan crap in the squad cars, the other reoccurring motif of "Any Which Way" is, I suppose, the music. The original movie was launched to an enormous box office success by the release of the hit country single, "Every Which Way But Loose," by Eddie Rabbit.

Everybody but Mr. Rabbit turns up in this one: There are songs and/or appearances by Glen Campbell, Ray Charles, Fats Domino, Jim Stafford (who sings "Cow Patti"), Johnny Duncan, Gene Watson, Sondra Locke, Clint Eastwood ("Beers to You"), David Frizzell ("You're the Reason God Made Oklahoma") and Cliff Crofford ("The Orangutan Hall of Fame").

Of the whole crowd, Fats Domino is the most inexplicable. What in the world is Fats Domino doing in a Clint Eastwood C & W action movie, wearing a cowboy hat and singing "Whiskey Heaven"? I guess it's just that kind of movie. 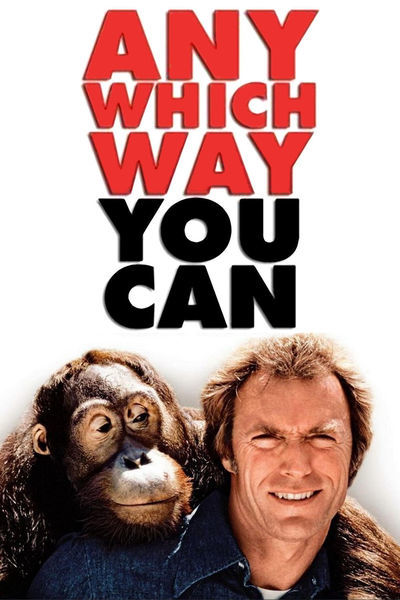