I can’t recall another James Bond film that caused as uneven a reaction as “Spectre." Watching it shortly before the reviews came out, I never imagined that any backlash was about to follow. The complaints differed somewhat from those I’ve heard on past 007 entries, but personally I believe that director Sam Mendes got just about everything right. The movie was neither too serious (“Quantum of Solace”) nor too humorous (“Moonraker”), it had plenty of large action scenes but none of them went overboard (“Die Another Day”) and more importantly, the character’s stories never got lost among the special effects as tends to occur (“You Only Live Twice”). “Spectre” was perfectly cast, the series’ regulars jelled, the jokes worked, the villains were menacing, the girls were as beautiful and three-dimensional as they’ve ever been and the locations were outstanding (how is it that Bond never visited Rome before?).

The movie deals with James Bond’s unveiling of the legendary crime organization and their eventual clash when the group tries to infiltrate British Intelligence. SPECTRE the organization first appeared in the early Sean Connery-era Bond films and it held the distinction of counting with Ernst Stavro Blofeld among its ranks, the only main villain in the series who survived at the end of each of his entries, even after making Bond a widower. Oddly enough, the character was always played by a different actor, sometimes as a cripple in a wheelchair (“For Your Eyes Only”) others as a champion skier (“On Her Majesty’s Secret Service”); sometimes as a shadowy presence behind a curtain (“Thunderball”) others bald and scarred (“You Only Live Twice”); sometimes he could be cruel and menacing (“From Russia with Love”) others he was campy, dressed in drag and not terribly imposing (“Diamonds Are Forever”). One of Bond’s most renowned enemies was never given a defined personality beyond being overall “bad” and yet the filmmakers somehow expected audiences to accept any incarnation of the character.

The SPECTRE period is best remembered for these gargantuan climatic battles that involved dozens of extras dressed in matching, brightly colored uniforms, launching grenades at each other while catapulting into the air via hidden trampolines. For a while the series settled into this lazy routine and the movies involved lacked much suspense. The best thing about this latest incarnation of SPECTRE is that it deals with them much like in the magnificent “From Russia with Love," as an utterly sinister and yet subtle organization, pulling the strings from behind the curtains on some truly evil acts.

“Spectre” is the second Bond film directed by Sam Mendes and it couldn’t be more different than his previous “Skyfall," one of the few 007 entries that managed to keep the audience at unease over the uncertainty of what was going to happen next. It follows the structure of most every other Bond movie, something that’s not necessarily a bad thing when considering this hadn’t been the case during the ten years of Daniel Craig's tenure. The fact that it includes a direct homage to “From Russia with Love” with another sensational (and brutal) train fight hardly makes it the “Greatest Hits of the Past” that some people have made it out to be. I don’t see how “Spectre” can be considered repetitive unless you believe that dealing with car chases and gadgets, snow action sequences or villains doing business in colorful lairs (if a bit reminiscent of hollowed volcanoes) means indeed that they are making the same movie all over again.

The Bond movies have had their share of outstanding action openings like the Thames Q Boat (“The World is Not Enough”) and the Istanbul Motorcycle-Train (“Skyfall”) chases, but only a handful have been able to provide as jaw-dropping an introduction as the one here with Bond and his nemesis doing battle while hanging from an out of control helicopter above a plaza filled with thousands of Day of the Dead celebrants. This may very well be the most astounding 007 launch since Roger Moore’s 007 skied off a mountain while wearing the infamous banana suit in “The Spy Who Loved Me” and it is just about the only pre-title sequence in the series that achieves an additional instance of comparable awe with its continuous "Touch of Evil"-type opening shot. This was obviously accomplished with the help of modern technology to hide the seams much like last year’s Oscar winner “Birdman," but unlike such it isn’t there just for show as it serves to jump start the action from the very first shot, something at which the Bond films have always been second to none anyway.

A 007 film that doesn’t stretch believability has yet to be made but I can’t recall another one that has been torn apart as minutely as “Spectre." Since the movie opened last November I’ve heard repeated complaints about how unlikely and unnecessary it was for Bond and Madeleine Swann (Léa Seydoux) to get those fabulous clothes for their Morocco train journey. This dilemma brings to mind the scenes where Roger Moore wears a tuxedo in the middle of the Egyptian dessert (“The Spy Who Loved Me”) or in the Rio de Janeiro carnival (“Moonraker”). And more than it being a matter of practicality or realism, I’m convinced they were done that way on purpose in order to get a laugh at their own absurdity, something essential to every Bond movie. I’ve also heard more than a few skeptical comments on how Bond and Madeleine could ever find a perfectly positioned net at the bottom of the MI6 building to cushion their fall. But if you’ve ever been to any site that’s under construction or renovation you’ll surely have noticed similar arrangements to prevent workers from getting hit by debris (my first impression upon once seeing such on the Empire State Building facade years ago was that it was there to save potential suicide jumpers!). Some were also puzzled by the size of the explosion that destroys the villain’s hideaway, the result of Bond shooting a simple valve, but I assume that any facility housing an army of hundreds in the middle of the dessert would have to be self sufficient and as such require a great deal of fuel to run, besides, a crime organization that invested its human trafficking profits into going Green may not have made much sense. Perhaps next time around Blofeld will consider hiding what was basically his lair’s self destruct lever behind a fake wall and under key, as he once did in his old Japanese Volcano. 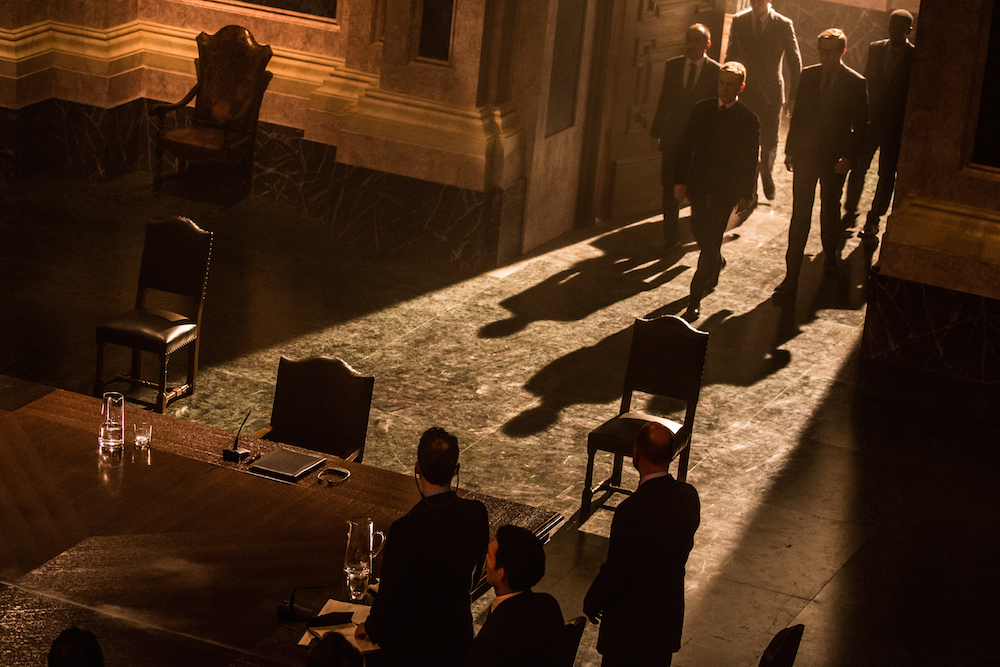 Of greater concern to me was Hoyte van Hoytema’s cinematography and his tendency to suck the reds and blues from the screen, applying instead a never ending supply of yellowish-browns. Hoytema’s golden tones in the L’Americain and train sequences were sensational, but overall the film looks much too flat. Case in point is the otherwise spectacular plane sequence in the Austrian Alps where the colors were toned down to a point where it’s hard to differentiate between the sky and the mountain peaks. Additionally, the nighttime London and the interior of the abandoned MI6 building were lit so dimly, they could barely be appreciated. The end result might be close to what they would look under such conditions, but just remember how spectacular Roger Deakins was able to make the similarly natured subway tunnels from “Skyfall” in what’s surely the best looking Bond movie ever. I also think that Daniel Kleinman’s nightmarish opening titles represent one of the his lesser efforts, especially the images of a shirtless Craig surrounded by several female arms meant to invoke the SPECTRE octopus, much like designer Maurice Binder once did with Roger Moore for “Octopussy” but not with quite as much class. In past title sequences we’ve had images of romance and horror (think of the burning skull from “Live and Let Die”) but never in the same frame and when the leading couple is shown wrapped around an octopus’ tentacles, this look more like the titles for “Alien” than for a Bond movie.

These facets aside, I don’t think “Spectre” showed a significant drop from Sam Mendes’ own “Skyfall." Here’s a director who never loses bearing on where his characters are set emotionally at any point of his movies and much to my surprise, he’s turned out to be one of the better action directors in the series’ as well. It wasn’t easy for the latest Bond to follow “Casino Royale” and “Skyfall," two entries that acquired a particular weight from the death of one of their main characters, something that may very well be on the radar early for the next 007 movie since the remaining presence of Madeleine leaves Bond out of action when it comes to new female conquests, the one thing he’s never had to survive in any of his movies.

Perhaps “Spectre” was too ambitious in trying to tie up the three prior Daniel Craig entries, the kind of decision that is never easy to accept when done retroactively, no matter how much sense it made on most levels. Regardless, this solution helped close the unforgivable loose end that was the character of Mr. White from “Casino Royale” and provided the grounds for a terrific homage to the “On Her Majesty’s Secret Service” titles with its hourglass of past memorable characters. The idea that Bond and the main villain knew each other as children may have been a bit too reminiscent of Dr. Evil/Austin Powers, but it did serve to link Blofeld’s story with the “Dead are Alive!” motif from the beginning of the movie. In the grand scheme of things I found this decision harmless but it’s clear that not every audience member out there was bound to feel overjoyed upon listening to the disclosure of the name Ernst Stavro Blofeld, from watching him acquire the same scars as his Donald Pleasence counterpart, from getting his identity revealed by the presence of a white cat (a really nice touch, by the way) or even from having him preside over a sinister meeting where he disposes of one of his own men around the largest table imaginable. Such moments made “Spectre” one of those movies that work better among the die-hard fans, hence the mixed reviews.

At first I couldn’t picture Waltz becoming Blofeld because of how unlikely it seemed for an actor of his stature to commit to doing several entries of such a commercial series. I do hope that his casting here doesn’t mean that there will be a different Ernst Stavro in each of the upcoming movies as they did during the 1960s; Waltz is one of those rare actors who can exude utter evil without breaking a sweat. He wasn't quite as frightening here as Bardem’s Silva was in “Skyfall” but hopefully he will be able to reach his character’s potential with one defined personality, and maybe even while sporting the same face as well.

Whatever the case, there’s no question that the Bond production values remained first rate in “Spectre," something remarkable for the 24th entry of any movie series. One of the best things about the Bond films is that the newer ones work just about as well as the fifty-year-old ones. The main reason behind this is that the series has never fallen into the hands of a film studio where the bottom-line is king, residing instead with the same group of auto-critical professionals whose main goal in life is to make the best James Bond movie possible. If you doubt this, just wait a while and watch how “Star Wars” fares in the hands of Disney.