For Your Eyes Only

“For Your Eyes Only” is a competent James Bond thriller, well-crafted, a respectable product from the 007 production line. But it's no more than that. It doesn't have the special sly humor of the Sean Connery Bonds, of course, but also doesn't have the visual splendor of such Roger Moore Bonds as “The Spy Who Loved Me,” or special effects to equal “Moonraker.” And in this era of jolting, inspired visual effects from George Lucas and Steven Spielberg, it's just not quite in the same league. That will no doubt come as a shock to Producer Albert (Cubby) Broccoli, who has made the “James Bond” series his life's work.

Broccoli and his late partner, Harry Saltzman, all but invented the genre that Hollywood calls "event films" or "special effects films." The ingredients, which Bond popularized and others imitated, always included supervillains, sensational stunts, sex, absurd plots to destroy or rule the world, and, of course, a hero. The 007 epics held the patent on that formula in the late '60s and early '70s, but they are growing dated. “For Your Eyes Only” doesn't have any surprises. We've seen all the big scenes before, and when the villains turn out to be headquartered in an impregnable mountaintop fortress, we yawn. After “Where Eagles Dare” and “The Guns Of Navarone” and the hollow Japanese volcano that Bond himself once infiltrated, let's face it: When you've seen one impregnable mountaintop fortress, you've seen 'em all.

The movie opens with James Bond trapped inside a remote-controlled helicopter being guided by a bald sadist in a wheelchair. After Bond triumphs, the incident is never referred to again. This movie involves the loss of the secret British code controlling submarine-based missiles. The Russians would like to have it. Bond's mission: Retrieve the control console from a ship sunk in the Aegean. The movie breaks down into a series of set pieces. Bond and his latest Bondgirl (long-haired, undemonstrative Carole Bouquet) dive in a mini-sub, engage in a complicated chase through the back roads of Greece, crawl through the sunken wreck in wet suits, are nearly drowned and blown up, etc. For variety, Bond and Bouquet are dragged behind a powerboat as shark bait, and then Bond scales the fortress mountain. A fortress guard spots Bond dangling from a rope thousands of feet in the air. What does he do? Does he just cut the rope? No, sir, the guard descends part way to tantalize Bond by letting him drop a little at a time. The rest is predictable.

In a movie of respectable craftsmanship and moderate pleasures, there's one obvious disappointment. The relationship between Roger Moore and Carole Bouquet is never worked out in an interesting way. Since the days when he was played by Sean Connery, agent 007 has always had a dry, quiet, humorous way with women. Roger Moore has risen to the same challenge, notably opposite Barbara Bach in “The Spy Who Loved Me.” But Moore and Bouquet have no real chemistry in “For Your Eyes Only.” There's none of that kidding byplay. It's too routine. The whole movie is too routine. 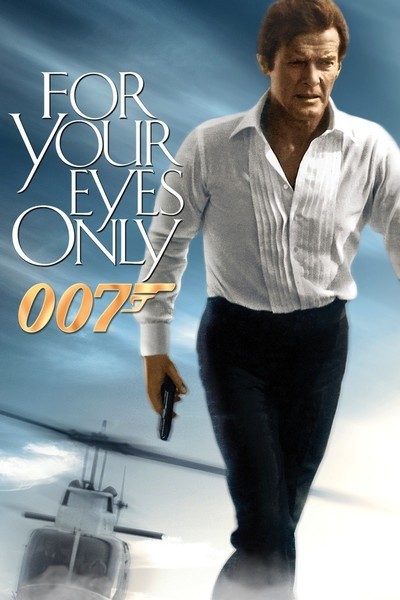