Roger had a passion for pulp fiction, cultivated at an early age and never surrendered to 'grown-up' tastes. He shared this devotion with his Sun-Times colleague Andy Ihnatko, who recalls their bond over magazines like "Weird Tales" and "Astounding Science-Fiction."–The Editors

Michael Apted's "Up" series of documentaries — which Roger placed on his list of the greatest movies of all time — plays off of a quote attributed to St. Francis Xavier: "Give me the child until he is seven, and I will show you the man."

If Xavier was granted sainthood solely for having come up with that line, he deserved it. Our passions as a child can consume us if we're not careful. But if we choose and define them well, they'll nurture and sustain us forever. Either way, our childhood passions hold a powerful mojo on us throughout our adult lives.

Apted's camera would have found me, at age seven and fourteen and twenty-one, dazzled by works of fantasy.

Mine is the generation of kids that cut school to see "The Empire Strikes Back" and "Raiders of the Lost Ark" on the first showings of the first day; who were completely subsumed by the art direction and scenic design of "Blade Runner"; who spent afternoons after school face-down on our beds, with our faces and arms hanging over the foot of the mattress, and the pages of "The Hitchhiker's Guide To The Galaxy" or Frank Miller's "The Dark Knight Returns" splayed open on the floor below.

These works weren't mere entertainment. They represented storytelling on a synaptic level; our brains were being rewired to expect more from the world than the pale, plain reality that was outside our windows.

Powerful mojo. Does it matter that we have these aspirational ideals because our ideals were so heavily influenced by fiction, instead of reality? Not at all. Kids steeped in reality risk becoming adults who only hope that they don't get hit by a bus before their graduate college. The kids who attended at least one comic book convention — at least in spirit — are the ones who create the iPhone, and commercial spaceflight systems.

I'm speaking of my own childhood experiences, but it's a universal truth. The excited, fully-engaged kid you once were has a say in how you see the world as an adult, and your choices either honor that child's vision, or they don't.

Roger sent me a box just a couple of weeks before he died. It contained some selections from his library: some volumes of P.G. Wodehouse (an author we both loved)… and a thick stack of pulp magazines from the Forties and Fifties.

Each with a title and a cover designed to sell. "ASTOUNDING SCIENCE-FICTION," "Weird Tales," "FANTASTIC Story Magazine." Here's the Summer 1944 edition of "Thrilling Wonder Stories." The cover shows a frightened woman wearing a daring backless number that Sir Mix-A-Lot would have approved of, but (I'm guessing) not the community standards of the day. She's clutching the muscular arm of a beefy, confident man firing a zap gun at a tentacled monster who's dragging a spaceship down into a luminescent ocean.

"PRIESTESS OF PAKMARI," the copy beckons. "With civilization at stake, space pilot Phillip Varon crosses the dread jungles of Venus on a mission of many perils!"

I flipped through the first issue in the stack, slowing down only enough to make sure I didn't tear any of the pages away in my excitement. These were no "collectibles" — a somewhat contemptible word used to describe mint-graded comics and magazines that are never removed from their slabbed, sealed packaging. These pulps are clearly "reading copies"; they're of negligible resale value because over the past seventy years, they've obviously been handled and read and re-read… and loved.

I was so taken in by the stories and the illustrations inside these pulps that Roger had sent me that I failed to notice the best thing:

Paper labels on the top of the first page.

In print: "ROGER EBERT'S SCIENCE FICTION COLLECTION." Underneath, the year of acquisition, written in ink: 1957. Or, printed: 1958. 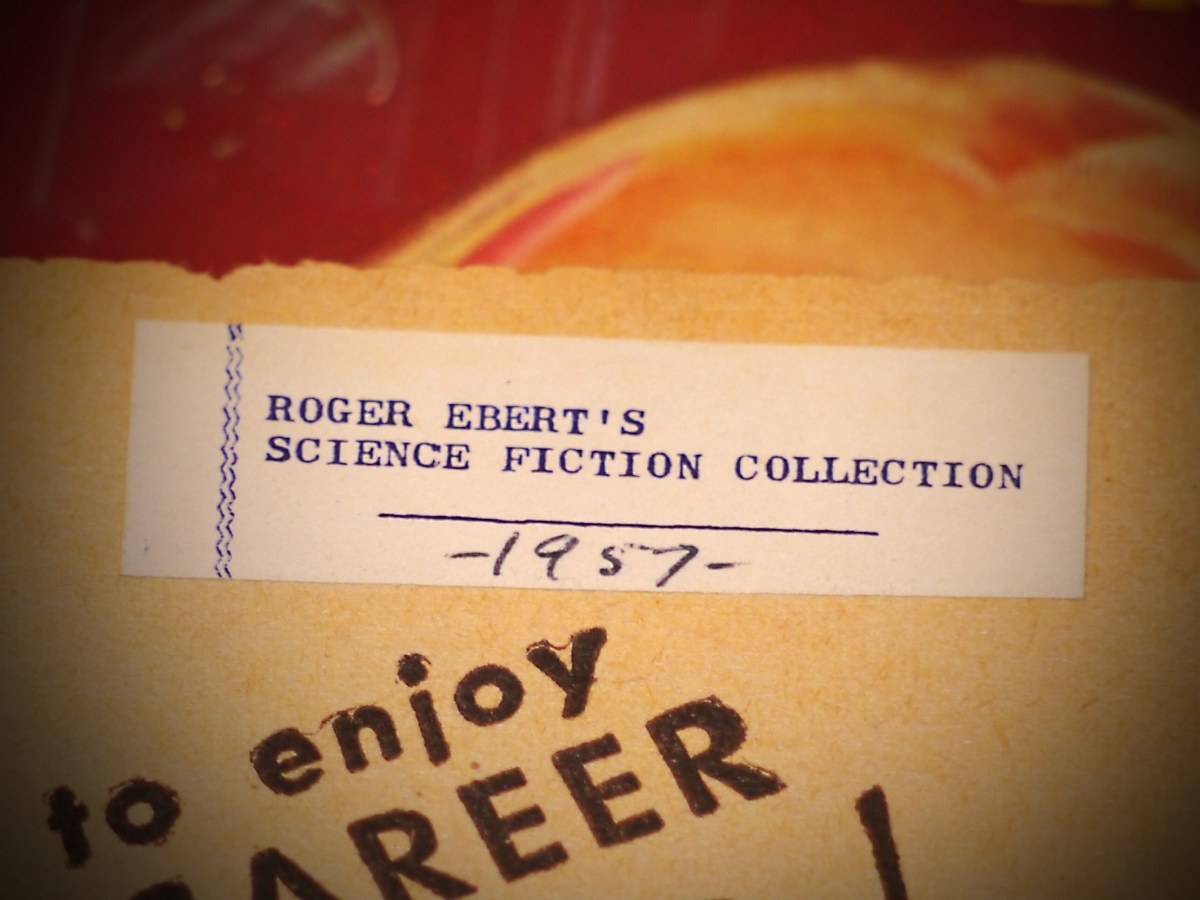 I reckon that many of you are now reacting the same way I did. You are thinking of yourself as a teenager, reading the week's new acquisitions, savoring the content… and then carefully updating your comic book database and filing the book away in the correct place in the correct longbox.

"Yes, indeed. Roger Ebert was one of us."

Many people can say that, because Roger was a humanist of endless curiosity.

But yes, Roger was a keeper of that eternal spirit of science fiction and fantasy nerds. His worldview was informed, in part, by his own "Star Wars" and "Hitchhiker's Guide." He grew up with big heroes, and stories that were written on enormous canvases.

Roger collected pulps and fanzines and stored them on metal shelves in his parents' basement. He edited his own zine ("Stymie"). He attended MidWestCon in Cincinnati in the late fifties. He waited in line to get Arthur C. Clarke's autograph. If he had been born just thirty years later (and in the Boston area), he and I might have jostled elbows at the dollar bins at the bi-monthly science fiction dealers' convention at the Radisson downtown.

There's a direct line from Roger's teenaged love of pulps and the writer he became… and it's not at all divorced from the world that teenagers know today. The avid reader became an active participant in fandom, writing and swapping opinions in the major fanzines of the day, just as the fan community today takes to message boards and Tumblrs.

And with that observation, his embrace of the Internet was inevitable. Arthur C. Clarke himself predicted social communities bound by electrons. From his first message posted to his Compuserve forum at the end of the Eighties to his final blog posts and tweets, he saw the Internet as a far more powerful form of fanzine, with a far broader and richer community.

"…The influence of fandom was on my writing voice," Roger wrote, in a 2004 essay for "Asimov's Science Fiction." "I became critical. I wrote smart-ass locs about other people's writing, and read them about my own. I was in a world that stood outside the mainstream. Science fiction was the occasion for fandom, and often the topic, but the subterranean subject was a kind of kibitzing outsider world view. Because of fandom, we got to 1967 ten years before most of the non-fan world."

Roger's love of science fiction and fantasy writing extended well into his career as a critic. I'm in the midst of cataloguing some of his pulp collection, and have been lucky enough to get to examine box after box of stuff. The chronology of his magazines keep right on going, deep into the mid-Seventies.

It's appropriate that he left a most worthy piece of science fiction on his hard drive. Roger was a man of boundless intellectual curiosity — his was truly a mind forever voyaging — but the same childhood mojo that sent him off on his journey was with him at the very end.

I'm to be forgiven if I choose to think of "The Molecules Of Titan" as Roger's creative "Rosebud."

But it's a joyous one. The story doesn't evoke a snowglobe fantasy of something that was hurriedly left behind and became a lifelong source of torment. It's a salute to something Roger valued just as deeply in his final weeks as he did when he stuck his first paper label on his first page of pulp print.

Science fiction and fantasy helped prepare Roger to lead a life that he dearly loved, and to produce decades' worth of work that gave so many of us so much joy.