In a collegial collaboration you don't usually see in Hollywood, Indiewire and Rogerebert.com, ostensible competitors, are pairing with the Sundance Film Festival to mentor emerging writers who desire to write about film. On June 5, 2013, the Sundance Institute announced the establishment of the Roger Ebert Scholarship for Film Criticism, in memory of Roger Ebert. The scholarship was partially funded by the Ebert Foundation. Six scholars have now been chosen and will make their inaugural appearance at the Sundance Film Festival Thursday, January 16, in Park City, Utah. They will cover the festival as part of the Indiewire | Sundance Institute Fellowship for Film Criticism, a workshop for aspiring film critics started by Eric Kohn, the chief film critic and senior editor of Indiewire.

"The desire among young critics to follow their passion hasn't waned," said Kohn. He helped select the six scholars from a pool of over 400 applicants. They demonstrated strong writing skills and a love of cinema. And although not required, most applicants also spoke of the influence of Roger Ebert in their love of writing or their choice of a career path.

"We think it's a perfect partnership," said Chaz Ebert, Roger's wife and the publisher of RogerEbert.com. "Eric has a strong program in place for mentoring these young journalists, and we at RogerEbert.com are delighted to work with him. To do this at Sundance, the festival started by Robert Redford as a showcase for independent American cinema is the icing on the cake. Roger had a special place in his heart for this festival and began supporting it right from the beginning."

Chaz continues, "It was here Roger made discoveries of films by directors such as Spike Lee, Steven Soderbergh, Kathryn Bigelow, Quentin Tarantino, Errol Morris, Gregory Nava, Ramin Bahrani and Werner Herzog." And in a special coincidence, Steve James, whose "Hoop Dreams" was celebrated by Roger here twenty years ago, is premiering a documentary about Roger, "Life Itself," and presenting the restored version of "Hoop Dreams." This will be really poignant and is even more heartwarming because of the presence of the Ebert Scholars."

The workshop builds on Indiewire's related initiative to support film critics at the beginning of their careers, the Critics Academy, which has taken place at the Locarno Film Festival and the New York Film Festival in collaboration with the Film Society of Lincoln Center. Several alumni from the Critics Academy are attending Sundance this year. "Roger voiced his support of the Critics Academy as a means of supporting the profession of film criticism when the project was still in its conceptual stages," Kohn said. "As a result, we're thrilled to sustain his passion and enthusiasm for this work with the support of Sundance and Chaz. In my experience, there's no better festival to cut your teeth as a working critic. If we live in the golden age of film criticism, as Roger himself argued, then this parternship goes great lengths to keep it that way."

In announcing the scholarship last summer, Keri Putnam, Executive Director of Sundance Institute, said, "Roger Ebert was, without question, one of the greatest champions of independent filmmaking talent the world has ever known. He was also an extremely generous supporter of aspiring film critics, and in that spirit, we have established the Roger Ebert Scholarship for Film Criticism."

Sundance Institute President and Founder Robert Redford said, "Roger Ebert's blessing on the Sundance experiment in its earliest days made all the difference in the world. His eloquence at cutting to the heart of what we were trying to do helped to interpret for others what I often could not find the words to say. I will always be grateful to him for that and for so much more."

"Roger believed in mentoring emerging journalists because of his own experience as a young writer," said Chaz. "He was hired as a reporter for the News Gazette in Champaign-Urbana, Illinois when he was 15 years old. Roger said the other reporters took him seriously and taught him how to build a news story. They never condescended to him or treated him like a kid." Consequently, as a journalist for the Chicago Sun-Times, when Roger received inquiries from young people interested in writing or film criticism, he took them seriously and sent typed replies with such advice as:

"Go to all the good movies you can."

"Write-write-write for any place that will print your stuff." 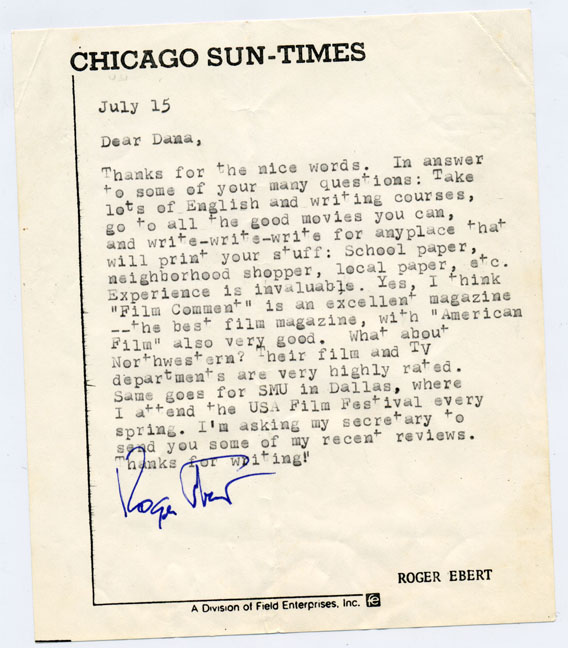 He even suggested colleges and programs they may want to attend. Slate critic, Dana Stevens, still has the letter he wrote to her when she was 12 or 13. As do Matt Cornell and Scott Foundas. You may read their letters at http://www.razoo.com/story/Roger-Ebert-Scholarship.

It is our hope that this spirit of collaboration will result in more writers who will embody the virtues of journalism espoused by Roger.