My Dinner with Clint 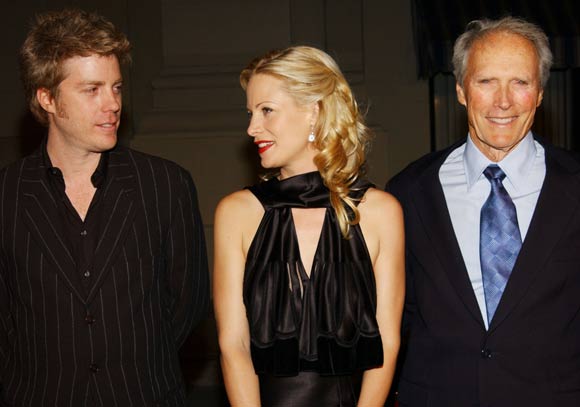 Kyle and Alison Eastwood with their father Clint on a big night out in Cannes.

I've just returned from the official dinner given by the Festival for Clint Eastwood's movie. I felt like Cinderella at the ball. The dinner was held at the swanky Restaurant La Palme d'Or on the Croisette. I wore my long evening gown just like all the French women wear at night. That's usually the last thing you want to do after watching movies all day, and most of the American women journalists skip the gowns, but I am a hybrid this year, not quite journalist and not quite guest. Besides, this was a special evening and I wanted to make a good showing for you.

When I arrived at the Hotel Martinez I was escorted up the beautiful art deco elevator to the rooftop restaurant. The path was lined with waiters on each side bearing bottles of champagne and sparkling water. I took my water in an elongated champagne flute. The official photographer gave me the once-over but didn't take my picture. There was no glint of recognition in his eyes, and why would there be? He moved on to famous prey.

After a while the guessing-game began: "What's the name of your table?" A look around the room revealed tables dressed with sparkling silver and china, and on each table a sign with the name of one of Eastwood's movies. We were standing halfway between "Million Dollar Baby" and "Letters from Iwo Jima."

Most knew where they were sitting, but I had missed this step. Joan Dupont from the Paris Herald-Tribune smiled knowingly at me and announced, "Chaz, you are at L'Echange." Joan broke her arm in a fall here the other day, so I helped arrange her fringed evening scarf around her shoulder. "What is the significance of that table?" I whispered to her. "Why, that's Clint's table!" I could hear little murmurs of appreciation. Suddenly I was not Ella of the ashes. I was wearing the golden slippers. "L'Echange" is French for the English title of Clint's movie, "Changeling."

This gift of seating was somehow connected with Pierre Rissient. He's the most famous person in the movie industry that most people never heard of. More people have possibly had introductions in the movie world through Pierre than by any other single person. I loved the piece you did about Pierre from Toronto when Todd McCarthy did a documentary about him. It's been said that between Pierre Rissient and Tom Luddy of the Telluride Film Festival, there are only two degrees of separation between all the people in the cinema of the Western world.

Pierre is from the old school of loyalty. Once on his good side he remembers you. And Pierre is very, very close with Eastwood -- he was instrumental in launching Clint's tide of recognition from the French critics. Pierre appeared at my side and told me that Clint wanted me at his table. It was a courtesy extended to me out of respect for you. A respect that has been built up over the years. They knew that neither you nor I could do a thing to help this movie. What could I do for it -- include it in my little blog? Pierre said I had been a good wife and if you were here you would be sitting at this table. They weren't going to abandon me. This was personal, not business.

I was speechless. I know I haven't received all the invitations to the parties at the Hotel du Cap and the round-robin star interviews that we always get when you are here. And that's okay. I know the score. So to hear Pierre express such sympathetic and humane sentiments touched me. When Clint arrived, he actually looked younger than the last time I saw him. He was with his gorgeous wife Dina and their daughter Morgan, 11, who is a natural beauty, and looks like the perfect combination of the two. Morgan told me she had a speaking role in the movie, and told me about her part in "Million Dollar Baby." She was friendly and polite.

The photographer shoved person after person next to Clint to take their picture. Clint said, "What about Chaz's picture?" Now the glint of recognition. "Ah, mais oui, of course. A picture with madame!" My ashes had turned into golden slippers. In due course I was also greeted by Kyle Eastwood, Clint's jazz composer and musician son, and Alison, his actress and director daughter. It was a family affair.

When I took my seat at "L"Echange" I learned that my other tablemates were Brad Pitt and Angelina Jolie. You will be happy to know that I wasn't starstruck. I discussed architecture with Brad and the movie with Angelina. When Brad learned I was writing a few articles for you while you were away with a fractured hip, he told a lovely story. It was about the engineer who fell ill while finishing the Brooklyn Bridge. His wife took over and ran the operation. The man could look out his apartment window and see what was going on. It was kind of him to tell me that story. Looking at the two of them up close and personal, I have to report that they are officially the best-looking couple on the planet. I feel sorry that they are so hunted and photographed.

Ron Meyer, the head of Universal and David Linde, formerly of Focus Features were also at the table, joined by Brian Grazer, the producer from Imagine pictures, and A.O. "Tony" Scott from the New York Times. Everyone was friendly and relaxed. Occasionally others would stop by the table, Tim Robbins, Sean Penn, Thierry Fremaux, the new head of the Cannes Festival, and so on. It was a great evening!

After a sumptuous meal of fresh sea bass, asparagus and chocolate, and an evening of lively conversation, I took my leave. By then my feet were not up to walking back to the Hotel Splendid in those shoes. But my carriage was no pumpkin! It was a new Mercedes with the massage-seat option. The windshield bore the sticker: “Authorized.” My benefactor was Richard Schickel, former film critic of Time. How did he fare such a privilege? He’s here as “talent.” He has a film at the festival about the history of Warner Brothers. Not bad for an ex-film critic.

As you know, at first I was hesitant about coming to Cannes by myself. I've been here at your side almost 20 years, but how would I perform as a soloist? Inviting me to sit at his table was the sort of gesture that shows what a big heart Clint has. I remember your stories about the two of you drinking Guinness at O'Rourke's Pub in Chicago 35 years ago, and I was so pleased to be your "bookmark." When people ask me where you are, I say you're at home, packing for next year.