Indy in the Riviera sunshine 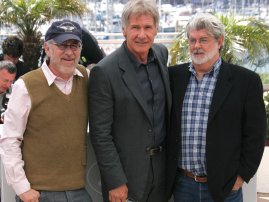 The weather gods smiled on Steven Spielberg and George Lucas for their world premiere of “Indiana Jones and the Kingdom of the Crystal Skull.” Crowds gathered in the Riviera sun, some of them with signs pleading, “S’il vous plait, I NEED tickets for Indiana Jones!” There was a screening scheduled for 1 p.m., for both the press and the official invitation holders. In the past mixing the two has spelled disaster for a movie so highly anticipated; usually the screenings are separate, so the black tie crowd doesn't hear the possible snickers of the critics. Today I expected a crowd, so I got to the Palais des Festivals much earlier than usual, but to no avail. The guards told me it was complet!

That became a challenge to find the right portal to enter. There is always a way. I noticed other American press in the crowd, locked out from admission. Their editors will be outraged if they don’t get their review in with all the rest of the world. I knew that you'll get dispensation to review the movie for the Sun-Times, but you were counting on me for color commentary. I had to get in. I go to a different door and made a personal appeal to Madame Christine Aime, the head of the Press Office. She gave me a stern look and an exasperated mini-lecture before allowing me entrance. In all the years I’ve known her I have never before brought forth her wrath. I want to tell her that I have followed the rules. I know I am here under a special consideration. I am trying to be your human “bookmark” holding your place until you return next year, and I don’t want to muck it up.

For a festival that still represents the art of the cinema, there is most definitely the other Cannes, where an American blockbuster with big movie stars and directors is welcomed with open arms. And you don’t get much bigger than Steven Spielberg and George Lucas combined. We Americans are known the world over for our Le Spectacle films, where Hollywood knows how to blow up things real good. The cineastes look down on them, but when you have a film like "Indiana Jones" opening in after all these years, and you get the whole cast and crew (George Lucas, Steven Spielberg, Harrison Ford, Cate Blanchett, Karen Allen, Shia LaBeouf, Ray Winstone, John Hurt, and Jim Broadbent) to appear at the press conference, that is an event. Inside the Palais I anxiously scanned the room just before the lights go down. I saw Ken Turan from the LA Times, Baz Bambigoye from the London Evening Standard, and Zbignew Banas from the Chicago media, but I didn't see many other recognizable critics. Suddenly a stream of humans strained against the door, and in came more critics, led by Time's Richard and Mary Corliss. Success! When the lights go down and the shiny new “Lucasfilms” green logo lights up the screen, the child next to me cheered loudly along with the rest of the crowd. Le Spectacle had begun.

I can’t wait to see what you think of the film. [See Roger Ebert's review here.] I can tell you I think it will make a lot of money. Of course it can’t compare to the thrill of seeing the first "Indiana Jones" on the screen, or even the moment in the third one when Sean Connery appears as Harrison Ford’s father. But for what it is, it's entertaining. I will leave the reviewing to you. As I write this, it's still too early in Chicago for you to have seen it. I will not spoil it by telephoning to give you any hints. Spielberg and Lucas have carefully kept the plot and most other things about the film secret--quite a feat in these days of anonymous internet postings of spoilers.

In fact, during the press conference that followed the film, a reporter from Dutch TV asked how they were able to keep things secret in light of the robbery of a computer from their studio. Spielberg admitted that when the computer files were stolen, they had over 3,000 still photographs comprising three-quarters of their production. But the stolen material was turned over to a website, the website owners cooperated with the studio to set up a sting operation, and the burglar was caught and arrested. The cast was pretty jolly during the press conference. Spielberg, who always looks like he is enjoying life and expecting good things from it, remained cheerful even when the first question was from a journalist who asked whether there was any pressure from Communists to create this movie. Steven couldn’t decide whether this was a serious question or not. At Cannes, it is. And it's not likely to be the last question like it. The director dismissed any notions of a Communist conspiracy but explained that if you follow the timeline from the first Indy picture, it would now be around 1957, during the Cold War, and they would have been the villains of that time. In response to a question from a Russian journalist, Cate Blanchett offered an apology to the “entire Russian population” for her accent, and thanked them for allowing her to play such a meaty villain with a fantastic haircut. She also admitted that she had fantasies of Spielberg casting her as Indiana Jones.

When asked why it took so long to make this sequel, Spielberg said he was the one who resisted a new movie. He had gone through his dark period of serious filmmaking and didn’t feel like making a film to entertain millions of people. He wanted to concentrate on historical dramas. Then he made "Jurassic Park" and realized action felt good once again. During the 1994 Oscars, Harrison Ford announced he was ready to put on the fedora once again and get the ball rolling. But Spielberg said they didn’t have the right story.

George Lucas always had the crystal skull in his mind as the MacGuffin they needed, but it wasn’t until writer Jeff Nathanson came on board that they were able to come up with the story they wanted. Lucas confirmed that special effects are only a tool, and it was important for them to have real stunts, with real people in a real story. They had to decide what the story demanded, he said, and how to make it as entertaining as possible. Even the artifacts they hunted are things that people think exist (whether or not they do) and have some sort of mystical power. That's true of the lost ark and the crystal skull. Harrison Ford chimed in that he was grateful to be able to do “physical acting.” He leaves stunts to the stunt men, and what he tries to achieve is action sequences done “old school” on a human scale. Otherwise it just becomes kinetics. In this way they stay ahead of their imitators and give more authenticity to their film.

Spielberg was asked whether there was any truth to the rumor that he wasn’t going to allow the film to be released through digital cinema. He said that when a movie is shot digitally and projected digitally, then it gives a nice clean image. But when it is shot on celluloid and projected digitally, it gives an inferior image. He still prefers to have all of his movies shot on celluloid. But he knows that digital projection is just around the corner and he will have to give in eventually. This movie will be shown digitally on 300 screens. The rest will be traditional film projection.

Harrison Ford praised Spielberg as “the hardest working man in show business since we’ve lost James Brown.” And Spielberg praised Ford as every director’s best secret weapon because of his work ethic, his wit and intelligence. Ford said the secret to Indy’s success is the high caliber of his villains, and that Cate Blanchett made for a worthy antagonist with her powerful and convincing acting. When asked whether he was afraid of what the critics would say about the film, Ford replied he wasn’t afraid because he expects that a certain number of people will turn the whip on him and disdain the movie because it is popular entertainment, but, he said he works for the people who pay to get in to see it, and he thinks they will like it because it is such a celebration of the movies.

The other serious issue was raised by a journalist from Tokyo who said the Japanese are sensitive to the bomb and asked why they had the image of the atomic bomb exploding into a mushroom cloud. Spielberg said he grew up with the threat of thermonuclear annihilation and the image of Indiana Jones standing against the mushroom cloud gave the movie a little more depth. Ford added there was no more graphic image of evil than the atomic bomb, and part of Indy’s quest is for Truth and Understanding.

Someone from Belgium asked Spielberg about the Tin Tin movies he is making with Peter Jackson. He said they're making three. He had never heard of Tin Tin until 1981 when a film critic compared "Raiders of the Lost Ark" to the adventures of Tin Tin. My dear Roger, knowing your love of the Tin Tin comics, and your quest to learn French by reading as many of them as you could, I wonder if that film critic was you?