The Ebert Club is pleased to share the following film by the great French auteur Rene Clair  and to invite you to join the Club and see what other mysteries lurk in the tree house! 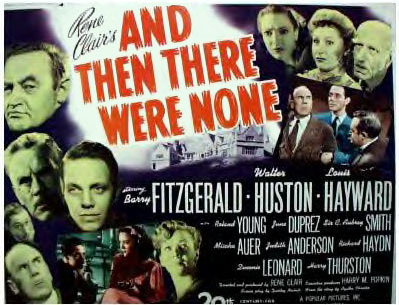 And Then There Were None (1945) Directed by Rene Clair. Written by Dudley Nichols and based on the novel by Agatha Christie. Starring Barry Fitzgerald, Walter Huston, Louis Hayward, Roland Young, Mischa Auer, June Duprez and Judith Anderson.  Winner! 1946 Locarno International Film Festival: Best Film.Synopsis: Ten strangers are summoned to a small island off the coast of Devon, by a mysterious note. Once there they discover that their unknown host, a certain "Mr. Owen", has not yet arrived. They're told he'll be there by dinner and so they retire to their rooms to prepare for the evening. Come dinner, their host has still not arrived and suddenly a voice on a gramophone record proceeds to accuse all of them of past murders they were never prosecuted for. The guests strongly deny any wrong doing and a decision is made to leave the island immediately!  A servant however, tells them that there's no way to get the boat from the mainland. There's also no phone on the island and the boat only comes twice a week. It won't be back until Monday morning and it's only Friday night....

Go here to join the Club and see what else we have!