“Everyone does where I work.”

Aaron Sorkin’s “The Newsroom,” which starts its final season on Sunday on HBO, can be both the most fascinating and frustrating show in exactly the same moment. How many other showrunners are this interested in addressing the stories that people are actually talking about instead of merely creating fiction? Sorkin undeniably tackles subject matter that even our news machine has failed to adequately address. And yet he often tackles it, pushes its face in the dirt and gives a victory speech. I love the ideas constantly swirling about nearly every scene in “The Newsroom.” But Sorkin often misses the forest by how much he gilds the trees. There were moments in the first two season of “The Newsroom” in which I literally yelled at the television, a rarer occurrence than you might imagine for a TV critic. The biggest problem with “The Newsroom” is one of focus and self-importance. It’s about people who cover the world, but it’s written by people who think they’re the most important thing in it. The story sometimes is what is reported and not who is reporting it. And don’t get me started on the misogyny in the show, especially in the first season. Have these issues of self-importance and sexism gotten better or have I merely gotten used to them? There’s certainly a more self-aware tone to the first two episodes of season three (as evidenced by that bit of dialogue quoted above, along with others), but “The Newsroom” feels largely the same as it did last year, despite Sorkin’s claim that this season would make up for the flaws of the last two. That is to say it’s both really good and remarkably aggravating—sometimes in the same line of dialogue. 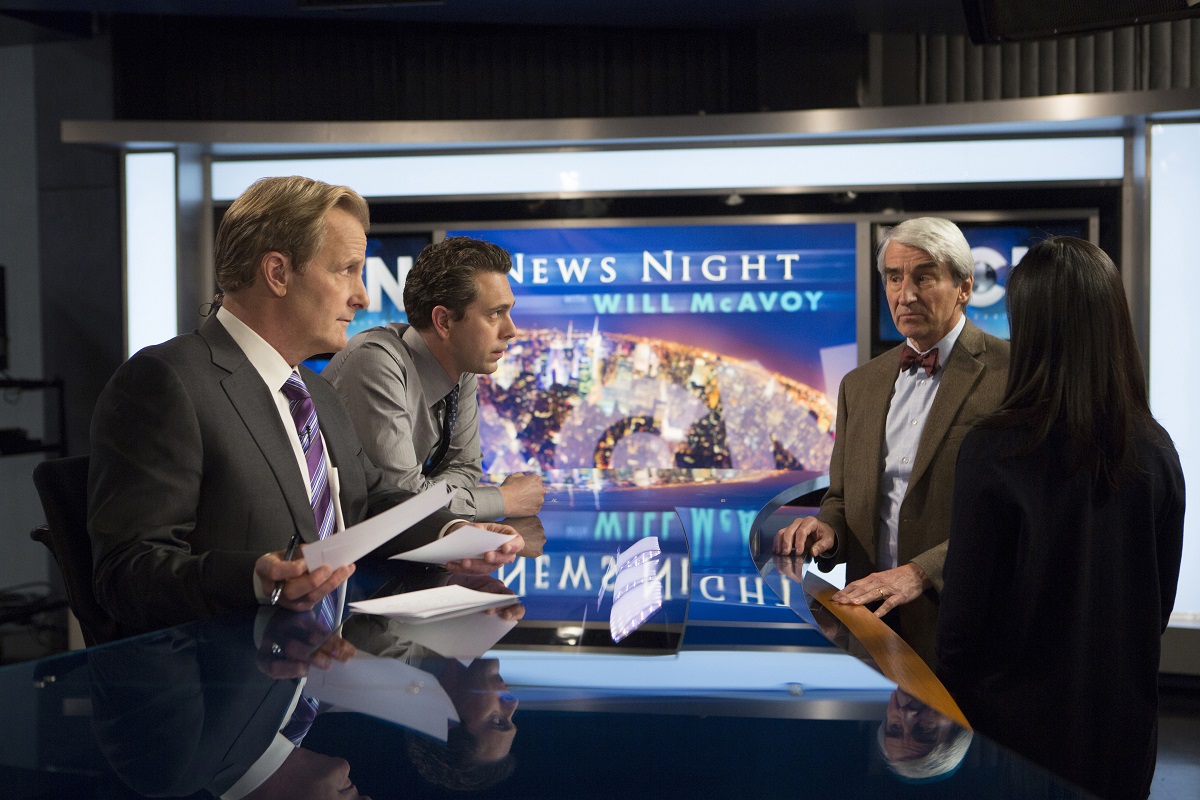 As he has for two years, Sorkin uses real stories to launch his fictional narratives. And so season three begins with one with plenty of angles to explore: The Boston Marathon Bombing. As in all newsrooms in the hours after the bombing, ACN struggles with what news to disseminate and what to demand corroboration on. The Boston tragedy was one of the first stories largely reported through social media, and that’s not necessarily a good thing. While networks like ACN were trying to determine the veracity of what was coming at the rate of 140 characters a second, sites like Reddit were basically launching social media lynch mobs against innocent people like Sunil Tripathi and those related to him. Timing is everything in the news industry but the folks at ACN this year are naturally a bit gun shy after the Genoa debacle from last season. They can’t get it wrong again. And they have to re-prove their value to the world as a source for honest reporting.

That last point is threatened even further when Neal (Dev Patel) makes contact with a whistleblower who claims to have evidence that the U.S. government is engineering conflict on the other side of the world. At what point does a reporter’s involvement with someone sharing classified information border on treason? How do you know where that line is? Echoes of Edward Snowden play into this intriguing arc, one that should give the underrated Patel an interesting final season. Another underutilized character, Alison Pill’s Maggie, also appears to have a final season arc that could work as the Boston bombing propels her into the spotlight in an unexpected way, and a fantastic scene in episode two gives her even more political cache. 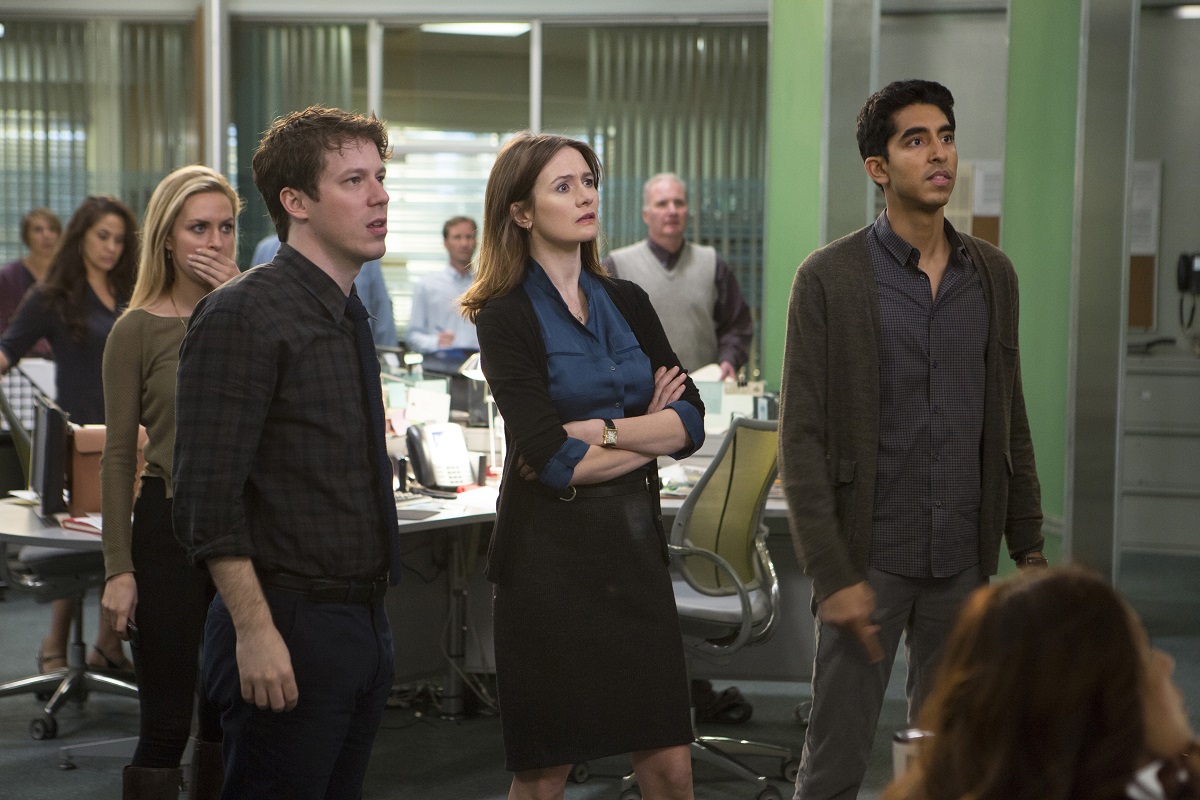 Back in the ACN offices, the plummeting ratings and continued financial woes of the network appear to be the end game for the series. As the network continues to struggle, how long can Will (Jeff Daniels) and Charlie (Sam Waterston) hold the moral high ground? Does that kind of position matter if no one is watching? Meanwhile, Jim (John Gallagher) hopes that Hallie (Grace Gummer), the reporter love interest he met last season on the Romney campaign, will fit in with the ACN crew, and Don (Thomas Sadoski) and Sloan (Olivia Munn) are dealing with the terms of their relationship while also discovering something unusual about ACN’s financial situation.

As usual, it’s a lot of plot for two episodes, but few writers are as deft as Sorkin at managing multiple spinning plates. Whatever one can say about “The Newsroom,” it’s never boring. The show barely pauses to catch its breath—and it would be better if it did more often—as Sorkin might miss a story or an angle if he didn’t cram his rapid-fire dialogue into a scene. And about that dialogue. “The Newsroom” can be both the most entertainingly “written” show on TV and the most aggravating at the same time. When Charlie says after the newsroom mistakenly cheers the failure of a competitor, “He got knocked down, you didn’t get taller,” it’s a quotable, GREAT line…that also sounds so written that if you pause for a minute to think about it, it will drive you crazy. No one talks like the people on “The Newsroom.” No one always has the clever quip, the right thing to say, the perfect response. When Will says, “Don’t reach for common ground, reach for higher ground,” it’s difficult for me not to roll my eyes. And yet Sorkin keeps it so entertaining, and so cleverly paced (and kudos to regular director Greg Mottola, who helms episode two, for that as well), that you submit to its unique rhythm. It’s like Mamet in that regard…not quite real but damn fun to listen to. And through the overwritten scenes, a true gem pops up every few minutes. I want to put “The President doesn’t want to waste political capital although I’m not sure what he’s saving it up for” on a T-shirt.

As mentioned, I’m not sure if I merely know what to expect from “The Newsroom” or if it’s actually improved in season three. Either way, these two episodes work. Giving Chris Messina (as Reese Lansing, the son of Leona, played so memorably by Jane Fonda) more screen time is a smart move. He’s a good actor who gets even better when he gets that Sorkin rhythm. (Like Mamet, some are better at Sorkin-ese than others). And I like the richer ensemble feel of the start of season two, giving as much screen time to actors like Patel and Sadoski as Daniels and Mortimer. Bringing back Marcia Gay Harden is never a bad idea either. I wasn’t sure how I’d feel about the final broadcast of “The Newsroom” given my conflicted feelings about the show over the last two years. I imagine some of those conflicted feelings will return this year. But I’m also thinking I’m going to be sadder when the ACN studio goes dim than I once expected to be.