For anyone whose childhood was enriched by the maternal warmth of Julie Andrews or the humanistic ingenuity of Jim Henson’s Muppets, the new Netflix show, “Julie’s Greenroom,” is guaranteed to be a joyous experience. Andrews co-created the series along with her daughter, Emma Walton Hamilton (“The Very Fairy Princess”), and Judy Rothman Rofé (“Madeline”), and stars as Miss Julie, the head of a performing arts workshop for youth. Her latest class consists of five children and a duck splendidly performed by Muppeteers, who bring their felt-and-foam marvels to life with an attention to nuance that would’ve made Henson proud. There’s a light in their eyes that is unmistakable, and it is conjured by every tilt of the head and upturned eyebrow, causing them to seem more vividly alive than countless CGI characters. Having memorably guested on “The Muppet Show,” Andrews has a natural chemistry with her pint-sized students, treating them as she would any human performer, while gently reprimanding her mischievous dog, Toby (John Kennedy), who also happens to be a puppet. The first 13 episodes of “Julie’s Greenroom” debuted on March 17th, and though the series is every bit as delightful as one would expect, it succeeds as far more than a nostalgia-fest.

In fact, there may not be a better defense for saving the National Endowment for the Arts than this program, which has coincidentally arrived during a period in which the President of the United States has proposed cutting it for the first time in history. Since its founding in 1965, the same year Andrews starred in “The Sound of Music,” the NEA has played an essential role in launching the careers of filmmakers and other visionaries whose work has left an indelible impact on the world. So many artistic institutions wouldn’t be in existence if it weren’t for the NEA, and the same could be said of programs such as “Sesame Street,” which provided me with the formative building blocks of education long before my schooling began. How fitting that the first episode of “Julie’s Greenroom” is entitled, “The Show Must Go On,” reflecting the sentiments of the class as they’re forced to scrap their plans for a “Wizard of Oz” production after a burst water pipe destroys their costumes and sets. This loss presents them with an opportunity to create their own original musical from scratch, and the premise of their show, it turns out, couldn’t be more topical: it’s about how all of the arts from a once-happy kingdom have been stolen by a mean ogre. Yet even when their resources are limited, the kids learn that they can transform ordinary objects into great artworks by infusing them with their imagination.

After Julie’s assistant, Gus (Giullian Yao Gioiello), leads the students—and the kids at home—in warm-ups, each episode offers a “master class” on a particular facet of a theatrical production, from screenwriting to rehearsing. The classes are taught by special guests, most of whom we learn are alumni (a.k.a. “Greenies”) of Julie’s class, whose backgrounds are glimpsed in photo montages, showing young viewers that these accomplished talents were once kids too. Idina Menzel kicks things off by encouraging the kids to discover the untapped possibilities in the world around them, leading to a later episode where the cast of STOMP utilizes various items in Julie’s office to create a percussive symphony. Tituss Burgess stops by to show the kids how costumes can place them in “someone else’s shoes,” altering their identity even through the multiple uses of a scarf. Violinist Joshua Bell performs a thrilling solo while reassuring the kids that a broken string isn’t the end of the world. There’s an especially lovely moment where ballet dancers describe how music can tell a story on its own, focusing on the notes in “Swan Lake” that anticipate the emergence of the princess. The importance of teamwork is emphasized in screenwriting sessions from Chris Colfer, singing exercises from Josh Groban (sporting a Henson-esque beard), songwriting lessons from Sara Bareilles (who performs the catchy theme song) and improv classes taught by Ellie Kemper, who demonstrates how the principle of “Yes, and…” requires performers to connect through their shared ideas. Providing ample comic relief are clowning instructor Bill Irwin (he of the elastic neck), assistant director David Hyde Pierce and acting teacher Alec Baldwin, who brings a dry hilarity to lines like, “This is the place where I had my first mini-scone!” Everything pays off in the richly satisfying season finale, where the students get to apply everything they’ve learned into their long-awaited show, which is viewed by a potential donor (Carol Burnett at her goofball best). 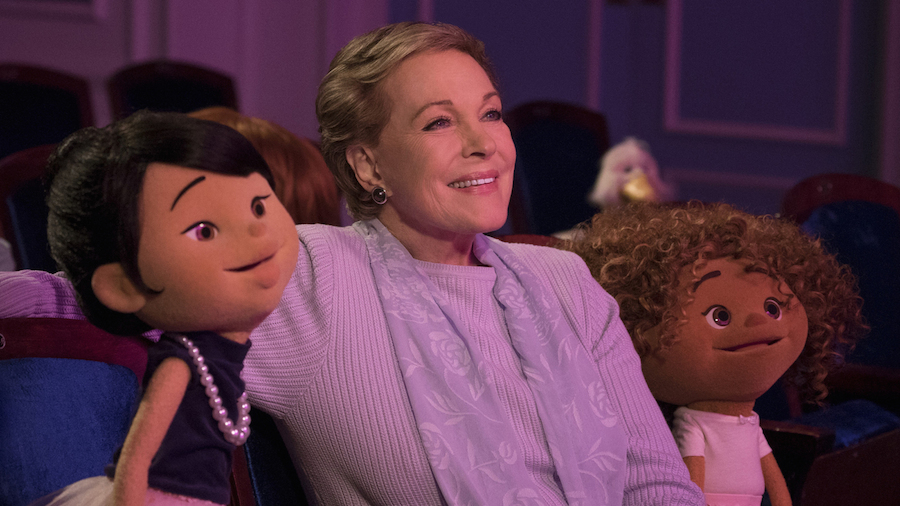 Beyond all the star power, what’s even more engaging is the impact that the arts have on each of the students, who become more fully realized as the episodes progress. Riley (Jennifer Barnhart) starts out as an introverted kid more interested in technology, and eventually crawls out of her shell after her assigned role as a jester causes her to take handstand lessons from Cirque du Soleil. Yet she’s able to maintain her gender-neutral identity in the process, getting promoted to assistant stage manager, while allowing her scientific knowledge to influence her art (her version of “London Bridges” explains that the structure fell down “because the suspension was faulty”). Starry-eyed Peri (Stephanie D’Abruzzo) must grapple with disappointment after her desired role of the princess goes to the adorably accident-prone Fizz (Dorien Davies) instead. Peri is initially horrified by her role as the ogre, but comes to realize that the character is actually an opportunity to stretch herself creatively. Hank (John Tartaglia) was born without the ability to move his legs, but he doesn’t feel trapped by his physical limitations, hammering out infectious melodies on the piano while Riley transforms his wheelchair into “a mighty steed.” Spike (Frankie Cordero) is a gifted writer who hones in on words he hasn’t heard before, such as “pantomime” and “stupendous” (“That is British for ‘awesome,’” Hank notes), inviting viewers to place them in their own “word banks.” When asked to share his story, Spike becomes shy and leaves the room. We then learn that his apprehension is caused by the fact that he hasn’t seen many stories about people with his skin color. As for the duck, Hugo (Tyler Bunch), he is included in the class because, as Miss Julie affirms, “The theatre doesn’t discriminate.”

Once the kids become more empowered by their artistic expression, “Julie’s Greenroom” powerfully demonstrates how the arts are anything but frivolous. Some of the most moving moments in the show occur when the characters are provided with heartrending documentary footage of real kids flourishing in the sort of programs that will likely get cut after the NEA is demolished. Students from the Idyllwild Arts Summer Program’s Symphony Orchestra Intensive eloquently describe how music has amplified their voice even when they are shy, giving them a way to communicate without words. Steven Fisher, co-founder of the Keystone State Boychoir, discusses how art allows us to become truly connected, whether we happen to be creating it or witnessing it. We see kids excelling in their craft thanks to such organizations as the Groundlings Theatre & School, the Harlem School of the Arts and Menzel’s own foundation, A BroaderWay. I was amazed by the rehearsal footage of the Infinity Dance Theater company, featuring performers with disabilities—some vision-impaired, some wheelchair-bound, all exceptional. The ripple effect of all these programs is perhaps best epitomized by the Kid Pan Alley songwriting project, founded by Paul Reisler to guide children in creating their own music. Watching the exuberance of the kids onscreen, I was reminded of Musicality, Michael Gibson’s after school singing group on Chicago’s South Side that went on to become semi-finalists on “America’s Got Talent.” I also thought of the NewArts program in Newtown, Connecticut, that has been established to provide a positive outlet for the grieving community’s youth. In my review of “Midsummer in Newtown,” Lloyd Kramer’s documentary about NewArts, I wrote that the applause received by the children after their performance served as “an affirmation that their work matters and that their lives matter too.”

What “Julie’s Greenroom” teaches us, above all, is that the arts are the voice of the people. Ending the NEA would be akin to suppressing the voice of the people, and there is, quite frankly, nothing more un-American than that. In a career that has nurtured children for over half a century, this show may very well be Andrews’ crowning achievement. Enormous props must also be given to co-writer/director Joey Mazzarino, a “Sesame Street” vet who has effectively channeled Henson’s spirit in every episode. At the play’s end, we learn that the ogre isn’t such a bad creature after all—just a lonely soul who was feeling left out. The moral of the story is that the arts are “for everyone,” and there’s no question Henson would’ve agreed with this empathetic perspective. “At some point in my life, I decided, rightly or wrongly, that there are many situations in this life that I can't do much about—acts of terrorism, feelings of nationalistic prejudice, cold war, etc.—so what I should do is concentrate on the situations that my energy can effect,” Henson once wrote. “I believe that we can use television and film to be an influence for good; that we can help to shape the thoughts of children and adults in a positive way. […] When I was young, my ambition was to be one of the people who made a difference in this world. My hope still is to leave the world a little bit better for my having been here.” With “Julie’s Greenroom” streaming into homes around the globe, it’s safe to say that Henson’s goal is continuing to be realized, and we are all the luckier for it.