In the spring of 2002, my high school drama club performed Stephen Sondheim’s musical, “Into the Woods.” I had the role of Cinderella’s alcoholic father, and can vividly recall a scene in which I had to envision a formidable giant dropping an ill-fated character from a great height. With the horrors of 9/11 freshly etched in my memory, all I could think of was the footage of bodies plummeting out of the Twin Towers. Faced with the sudden threat of imminent doom, Sondheim’s ensemble of faerie tale protagonists find their sense of normalcy upheaved and are forced to start from scratch without the promise of a happy ending. Only by coming together do they have any hope of obliterating the encroaching darkness. It wasn’t until years later that I realized just how profoundly cathartic an experience it was to perform this masterpiece of theatrical literature, and there’s no question that same catharsis was felt by the kids in Newtown, Connecticut, fortunate enough to be cast in “A ROCKIN’ Midsummer Night’s Dream.”

Directed by Michael Unger, this pop musical adaptation of the Shakespeare classic was developed by NewArts, a program launched to enrich the lives of Newtown’s youth through their participation in the performing arts. The play was staged in the summer of 2014, less than two years after a 20-year-old gunman killed 20 first graders and six adults at Sandy Hook Elementary School, before turning the firearm on himself. President Barack Obama singled out the tragedy as his worst day in office, and was moved to tears at the mere mention of it. “Midsummer in Newtown,” Lloyd Kramer’s documentary about Unger’s Shakespeare production, has the slight misfortune of coming out after Kim A. Snyder’s documentary, “Newtown,” which was a more wrenching and haunting portrait of the community’s grieving process. Snyder’s film made my top ten list last year, and though Kramer’s picture isn’t quite in that movie’s league, it is a moving and necessary one as well, particularly in how it hones in on a specific mode of psychological and spiritual healing.

After losing his daughter, Ana Grace, in the massacre, musician Jimmy Greene discovered a book of flower illustrations that she had just finished for him. Strewn throughout the pages are her repeated expressions of, “I love you,” indelible signs of a happy childhood unblemished by the pain that led the gunman to commit the most monstrous of acts. Ana’s mother, Nelba Márquez-Greene, refers to the shooter by name in her interview, and says that he would’ve been greatly helped by the human connection offered in programs like the Ana Grace Project, which she founded as a tribute to her daughter (he could’ve also benefited from the screenwriting classes featured in Ben Lear’s “They Call Us Monsters”). Meanwhile, Jimmy channels his grief into his artistry, creating an album dedicated to Ana entitled, “Beautiful Life.” There’s a lovely sequence of Jimmy’s live concert performance, incorporating home video footage of Ana singing on the screen behind him, as he plays music from the album. It’s impossible not to be touched by scenes like this, though I do wish that Kramer’s film moved at less tight of a clip, allowing us to become more fully immersed in individual moments. The footage of actual play rehearsals is much smaller than one would expect, and it would’ve been more effective to show the kids having their own epiphany about the show’s metaphorical subject matter (the world in disarray, the rebuilding of Athens), rather than having their teachers spell it out for the viewer.

Kramer’s background in TV movies, including the Mitch Albom adaptations, “The Five People You Meet in Heaven” and “For One More Day,” inform his straightforward yet tender approach to portraying the spirituality of his subjects. When asked what the most important thing in his life is, nine-year-old Tain Gregory quickly replies, “God.” He had been looking forward to help babysit one of the victims on the day of the shooting, and he was devastated when the boy didn’t come home. “Midsummer in Newtown” is at its best when it simply observes kids like Gregory finding comfort on stage while channeling their inner creativity. One of Gregory’s teachers marvels at how he loosened up during his audition, where we see him acting out every galumph and snicker-snack of Lewis Carroll’s “Jabberwocky” poem with his entire body. Nicole Kolitsas adorably rises to the challenge of bringing the required level of mischief to her character of Puck, while Sammy Vertucci opens up about the tricky choreography faced by her fellow faeries. The importance of theatre in the lives of these kids hits home as soon as the show is over, causing Vertucci to solemly note that it feels as if “the play just died.” Gregory finds himself at a loss for words and bursts into tears. His mother consoles him with the fact that his tears illustrate how the play gave him an enriching experience that he can have again. I wasn’t overcome with emotion until the very end of the play, as the lights fade out on the image of a bright light soaring from the hands of a little girl and into the heavens. The applause elicited from the parents and teachers in attendance reminded me of just how powerful that sound can be to a kid. It’s an affirmation that their work matters and that their lives matter too.

The atrocity of Newtown is twofold: the fact that it happened and the fact that the government did absolutely nothing to prevent it from happening again. Snyder and Kramer’s films aren’t politicized because they don’t have to be. The human toll of a senseless tragedy like this speaks for itself, as does the importance of arts programs at a time when the newly elected president appears hellbent on destroying them. Now that shootings have become as commonplace in this country as sporting events, none of us can afford to shield our eyes from what happened in places like Newtown. Or Orlando. Or Englewood. This is our reality, and it is terrifying. 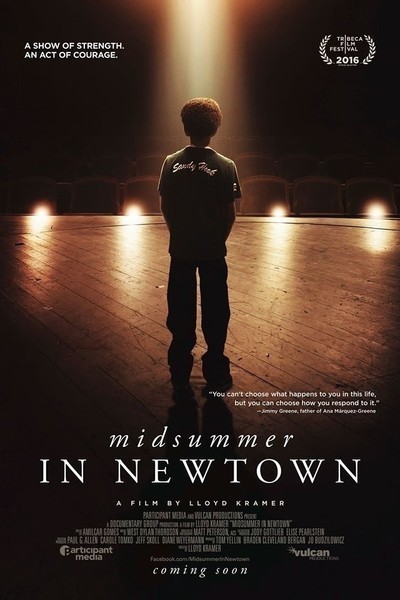