The Questionable Truth of Memory in Showtime’s “The Affair”

Rarely has a new drama been more difficult to review from one episode sent to press than Showtime’s “The Affair.” I have SO many questions about how this will work in a weekly form, whether the sexuality will necessarily become a little more intense or remain at this sort of soap operatic level, and if we can engage with characters presented in a structure in which they are inherently impossible to really know. It could be completely disastrous by Halloween. However, “The Affair” passes two crucial tests. One, it’s entertaining & well-made on its own accord, judged purely as an hour of entertainment. Two, I really want to see the next episode.

So remarkably reminiscent structurally to “Gone Girl” that one wonders if it wasn’t timed to have its premiere while that David Fincher film owned the pop culture zeitgeist, “The Affair” is another he-said/she-said drama about the dissolution of a marriage, and illegal activities. The program is structured as a pair of sometimes divergent flashbacks brought to mind through the interrogations of Noah (Dominic West) and Alison (Ruth Wilson). Why they’re being interrogated in separate rooms is unclear in the premiere, but their relationship is clearly of great interest to the police, leading viewers to suspect that perhaps the two conspired to kill a spouse. Did I mention Noah and Alison are married to other people? 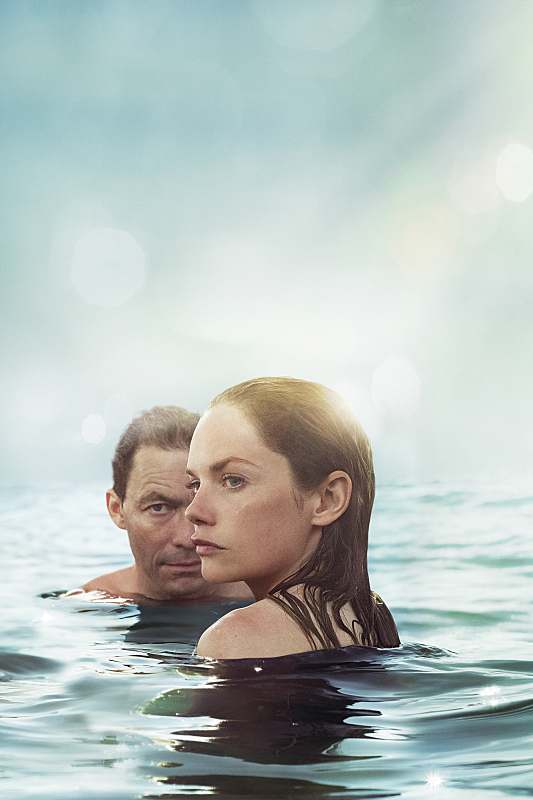 Noah has a large family with supportive wife Helen (Maura Tierney). As he makes clear to the officers, he was happy. Sure, his son was going through that period of adolescence in which young men become nearly sociopathic and his daughter barely paid him any attention at all, but life wasn’t bad for this NYC public school teacher. He heads to his in-laws for the summer, where he meets waitress Alison. She’s there when Noah’s daughter begins to choke at lunch, causing a scene and an emotional response from the waitress. It turns out Alison has lost a child with husband Cole (Joshua Jackson), and she’s more than a little fragile.

Each episode will consist of two interpretations of the same series of events: the meeting between Alison and Noah which would eventually turn into an extramarital affair for both in the premiere. Differences are subtle but crucial. In Noah’s flashback, Alison is far more aggressive, flirting with him from their first encounter, and practically daring him to shower with her later that night. She’s more of a temptress in Noah’s memory. In Alison’s flashback, Noah is nearly an afterthought. She places their meeting more in the context of her entire day, which happened to be an anniversary of the tragedy that shaped her life. It’s interesting that his memory of the beginning of an affair is more deeply sexual and flirtatious, while hers is more about emotional needs not being met and fragility. At its best, “The Affair” could be a conversation starter about how men and women view the emotional and physical entanglements that come with cheating on your spouse.

I hope. I can’t say at all where “The Affair” is going. Will the “Fifty Shades of Rashomon” structure grow exhausting? Can we get into the drama without a single reliable narrator (keep in mind, they could both be Keyser Soze-ing the hell out of the cops)? It’s a lot to ask, and I worry that the show’s structure will define the program more than the characters within it or the themes explored by it.

Having said that, there’s just as much reason for hope that this will be the next great cable drama. Most notably, the cast clicks. West and Wilson, both so great on “The Wire” and “Luther,” respectively, are perfect here. He captures that aging family man dynamic perfectly in that one can see that Noah used to be something of a ladies man but has kind of settled into a rut, even if it’s a happy one. More than one attempt at sex with his wife (and it’s so great to see Tierney working again) fails through child interruption. Like so many men his age, he’s just a bit stuck, and West expertly plays the fact that infidelity often comes from the boredom that comes through being content as it does through dissatisfaction. He’s perfectly matched by Wilson, who could give one of the best performances of the Fall TV season. I love the different Alisons we get in the premiere—the flirt of Noah’s flashback and the wounded soul of Alison’s. I can’t wait to see how Wilson merges the two.

“The Affair” will only be ten episodes long, and there’s no saying for sure where we’ll be at the end of that arc. Will we even know the crime Noah and Alison have committed? (West recently suggested in an interview that we may not). How long will we be patient with two characters we don’t really know? Then again, when it comes to infidelity, can we really know the answer to the commonly simplified questions of how and why? Maybe the greatest accomplishment of “The Affair” will be to force us to recognize that there are no right answers, only versions of events.