"The Connection" and "In the Land of the Head Hunters"

It’s amazing, the realities that can co-exist in the same moment in time. While Shirley Clarke was filming “The Connection”, a New York independent film that captures the blistering intelligence and roiling emotions of jazz and the cold sweat of heroin addiction, Hollywood was churning out virgin cocktails like “Breakfast at Tiffany’s.” Clarke was on a whole ‘nother level.

Milestone Films is putting out new DVD’s and Blu-rays of “The Connection” so pristine that we can’t miss the genius this time around. Clarke’s raging, tickling lyricism (edited by her own hand) brings out the explosive honesty and stealthy compassion in Jack Gelber’s screenplay (adapted from his own stage play). There is an indictment of a whole way of life stitched in there, and I’m not talking about the junkie way of life. I’m talking about the square, judgmental, blinders-on way of life that was Hollywood’s specialty at the time. 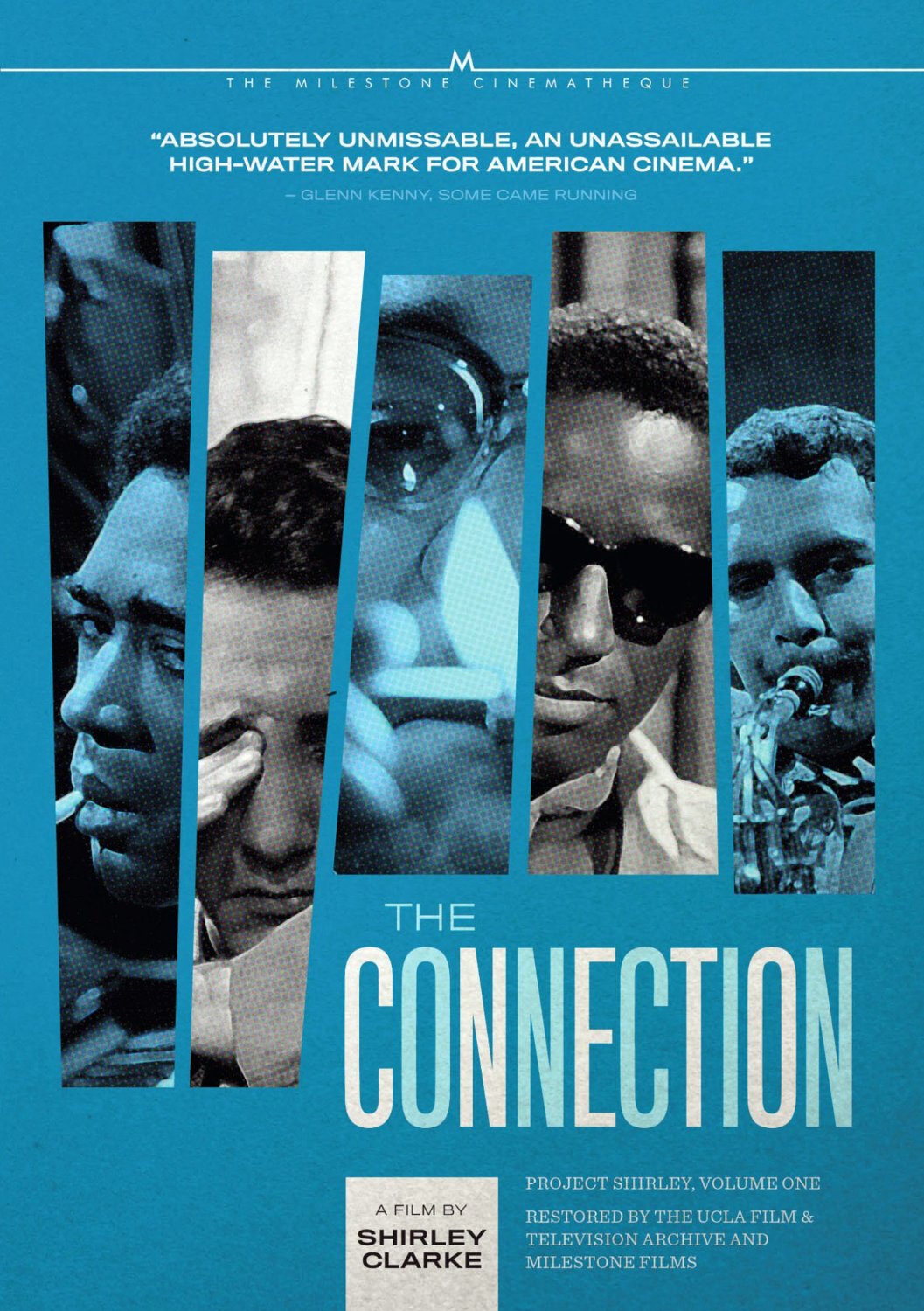 “The Connection” should play on an eternal septuple-bill with William Greaves’ “Symbiopsychotaxiplasm: Take One,” Jim McBride’s “David Holzman’s Diary,” Haskell Wexler’s “Medium Cool” and Milton Moses Ginsburg’s “Coming Apart”, all meta-fabulous works which dismantle both filmmaking and society, some more intimately than others, others more politically than others, but all surging out of 1960’s unrest/upheaval. “The Connection”, banned for profanity and a box office failure, was out ahead of them all.

Former dancer Clarke’s vanguard ways really ignite to music. Whenever the musicians emerge from (or settle into) their heroin stupors long enough to practice some gliding bebop numbers, the camera glides along with. And against. Somehow, Clarke got her crew to corral bulky, ungainly film cameras into a nimble rhythm section/chorus. Her jump cuts, whip pans and found portraiture have the effect of bringing in a scat singer or a distorted electric guitar. We observe these tortured men finding, or at least groping for, temporary release, and find in their eyes and comportment their knotted life stories. The lighting, a wash of punchy key light and unexpected slashes of deep shadow, suggest a skid row purgatory designed by Sam Fuller. Clarke’s camera winds through this space in sympathy, mockery and horror. (A few priceless closeups of composer-actor Freddie Redd glowering over his shoulder from the piano stool communicate more than most entire movies.)

Of course, the ruse is that this isn’t supposed to be Clarke’s camera at all. We are watching faux found footage by documentarian Jim Dunn (William Redfield) and his impish cameraman, J.J. Burden (Roscoe Lee Browne). We observe more on-camera discussion of how, when and what to shoot than we do any traditionally dramatic content. The arguments, stalling and clowning are the drama. Dunn’s subjects do all they can to subvert his efforts to turn them into pathetic entertainment value.

They turn on the director and eventually conspire to turn him on--to get him hooked on dope so that his lofty pronouncements about using cinema as an S.O.S. for their predicament will be more honest. These junkies push an impersonal, exploitative filmmaker to make it personal.

As phenomenal as “The Connection” is, my imagination occasionally roamed to an alternate universe where John Cassavetes plays the oily onscreen director Dunn (while somehow miraculously staying out of Clarke’s way): Sweet lord, dynamite. Redfield, pasty and groomed like Howdy Doody, plays the role super-white and super-uptight. He’s the kind of mayo-on-Wonder bread Clueless White Guy that black hack comedians regularly pull off the shelf. Yet, it works well enough as a contrast to the rest of the willful, grungy characters. (“Just keep me out of it,” Dunn tells his cameraman when he catches him still rolling between takes. “You are ‘out-of-it’,” one of the guys mutters in response.)

Of these, Warren Finnerty is among the most mesmerizing (and not just for his eerie resemblance, in appearance and mannerisms, to Steve Buscemi). His character, Leach, rents the shabby apartment that is this film’s sole setting. Man, is he a sight. In constant chronic pain from a festering boil on his neck, he lurches stiffly about the room, cursing his freeloading friends and groping for scientific, philosophical or poetic ways to sum up their situation, failing every time. Imagine a Beat poet too overwhelmed by anger and pain to articulate much more than frustration. But the poetry is there, as evident when Finnerty air-drums with great passion and pathos during a jam session. 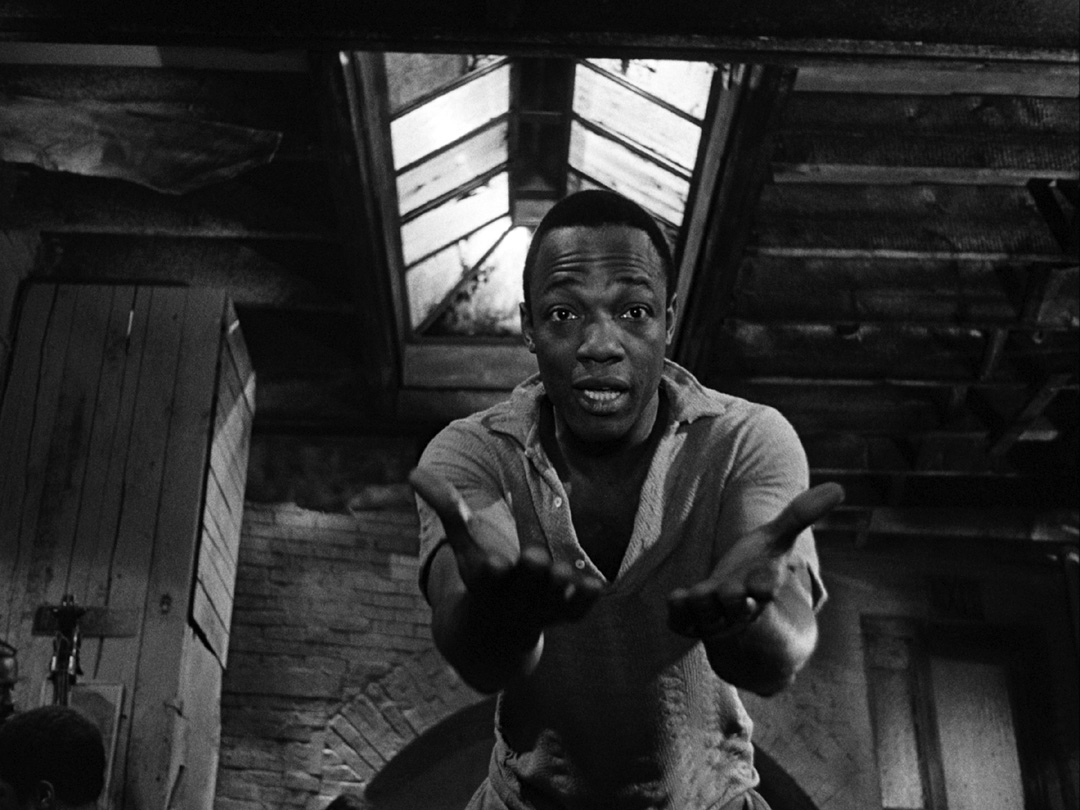 His cool contrast is Cowboy, the alto sax player-turned-dope dealer for whom Leach and his friends wait during a great, agonized stretch of the film. Unlike Godot, Cowboy eventually shows up, and he is worth the wait. Carl Lee plays him as an untouchable tower of cool. Cowboy knows all the angles and plays them with as much finesse as his musician clients play their instruments. You’d have to go to the other end of the 1960’s, to Calvin Lockhart’s fashion plate hero in “Leo the Last” to find a black character of such commanding slickness. But, Cowboy, too, will reveal other layers and temperatures.

Where Leach fails at verbal insight, his buddies, the simple Sam (James Anderson) and intellectual Solley (Jerome Raphel), come up with offhanded zingers:

Solley (in praise of dope addicts): “Who else can make so much out of passing out?”

In a moment typifying the film’s ear for black vernacular dialogue and its general fearlessness regarding race, cool-as-shit sax player Jackie (Jackie McLean) challenges his old neighborhood homeboy, who is busy shooting the film:

JACKIE: “Hey, J.J., you sure have changed since Harlem, man.”

JACKIE: “I’m my own man. Is your name gonna be on this film?”

For a film overflowing with acid observations, it’s surprising how emotionally affecting it becomes as it bops and slouches along. The dust never settles: These men despise and love each other, and their drug habits only deepen both emotions. Every interaction resounds with unspoken, years-old guilt and grievances. The music binds them together as much as the drugs, as Weaselly sax player Ernie (Gary Goodrow) notes about unlikely soulmates Sam and Solley: “Solley can read Greek and Hebrew, and I don’t think Sam can read English, but they’re both alike. They both swing with being high... They both dig music in the same way.”

As for their shared purgatory, it has a shabby, claustrophobic grandeur. Chipped floorboards, curdled paint, filth-lined brick, stacks of ancient newspapers on a rickety wooden staircase--I was surprised to see two legendary production designers, Richard Sylbert and Albert Brenner (here apprenticing as art director), in the credits, since the apartment looks purely stumbled upon. The fact that it was actually a set built on a sound stage shows why these guys are legendary. 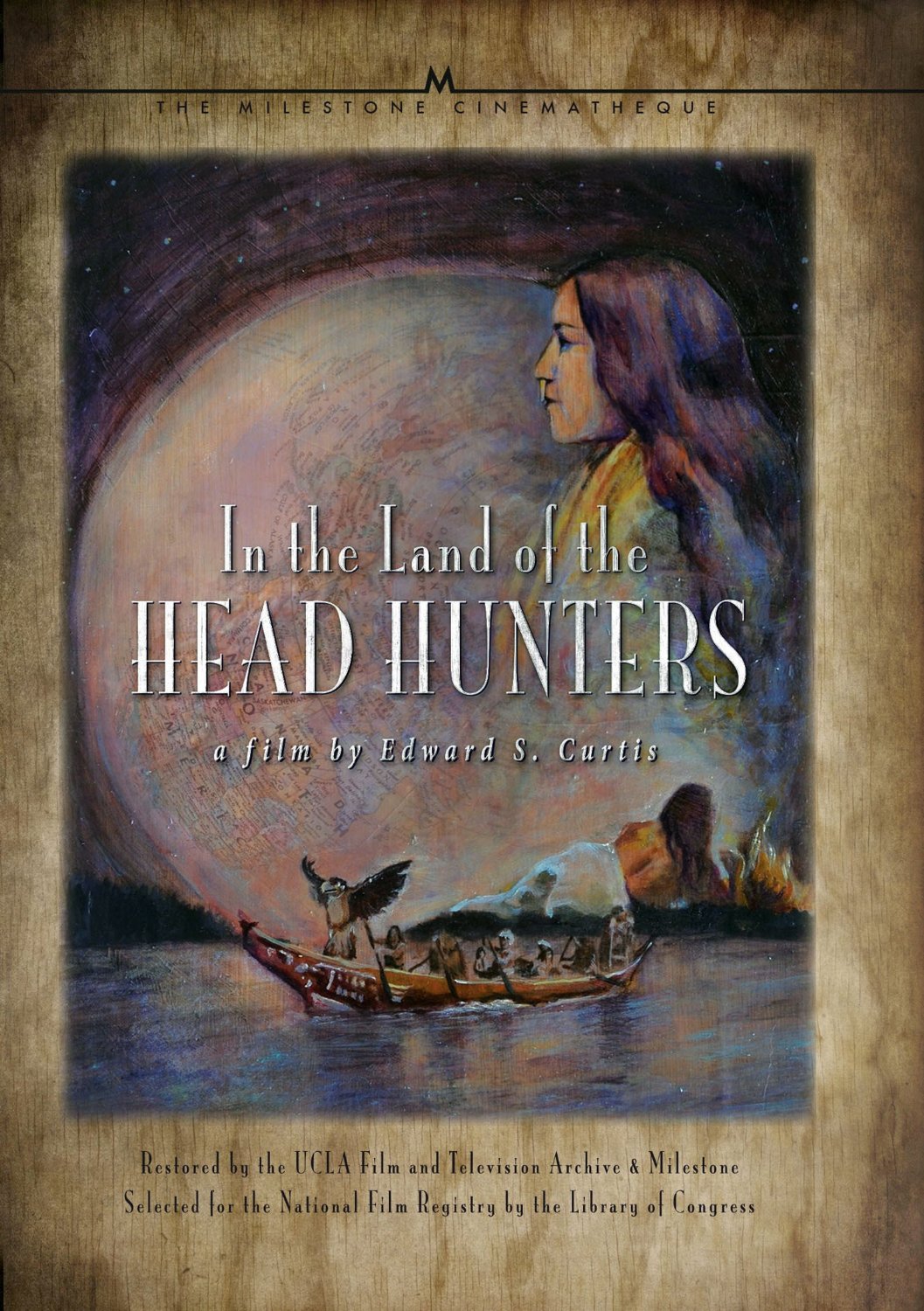 Distributor Milestone Films, a legend itself among home cineastes, is also debuting another restored wonder, Edward S. Curtis’ spectacular silent film “In the Land of the Head Hunters.” Shot in British Columbia in 1914, it predates such historical epics cast with authentic indigenous people as “Atanarjuat: The Fast Runner” and “Ten Canoes” by nearly a century. UCLA Film and Television Archive has restored both “The Connection” and “In the Land of the Head Hunters” from the best materials available. In the latter case, that means working with some badly damaged prints, filmmakers’ notes and still frames from missing scenes. The fragmented result is still a fascinating eyeful. Kwakwaka’wakw tribesmen enact dance rituals and simulate intense battles with palpable energy. The story involves warrior Motana’s journey to rescue his bride from a vicious warlor