"Minority Report" and "Scream Queens" Take TV to the Movies

With so many TV series wishing they could all be taken as seriously as a motion picture event, a solid quality test can be whether a TV pilot makes you want to see the sequel. This week, FOX premieres two series heavily influenced by the movie format, either in branding or style. One series takes advantage of the expansiveness provided by a series, making us grateful that the full package isn't just 90 minutes. The other, however, has viewers relieved that a story on TV can end in less than 45 minutes of programming, and may never be continued again.

Let's start with the latter. The world of "Minority Report" may never stop being interesting. It explores the humanity in believing that one is guilty until proven innocent, while touching upon the flaws in putting belief beyond science. When Philip K. Dick conceived of it in 1956 for a short story it was important; the same can be said when Steven Spielberg directed a blockbuster adaptation of it starring Tom Cruise in 2002.

This series (premiering on Monday, Sept 21 at 9/8c) which uses the name more for branding than story significance, bungles all of those intriguing threads about the unique sci-fi concept. "Minority Report" reduces the angle of predicting crime into a procedural investigation set in the future, where the hitch is just that the crime in question hasn’t happened yet. And because it’s the future, hands-free tech and flying robot gizmos take the place of the type of the grittier hardware that you’d see on "NCIS."

"Minority Report" continues the saga of Pre-crime, but with characters who don't bring the narrative immediacy as in the Spielberg film. The story goes that the Precogs were two twin brothers and a sister who could see murders before they happened, leading to the creation of a police branch called “Pre-crime” until its collapse. Now, decades later, in this series the Precogs have grown up, and we follow one of the twins, Dash (Stark Sands, at a higher function than his work in “Inside Llewyn Davis”) as he tries to integrate into the world. (We meet his brother Arthur, played by Nick Zano, not providing hope for this series as well.) As neurotic as he is sensitive, Dash is still able to see murders, but he doesn’t know how to take care of it. Thus, he teams up with Detective Lara Vega (Meagan Good, finally given a lead role, but unfortunately in this series), who has the gumption, but not the sharp wit (a mean conceit from the series). He can’t use force, she can't think very fast, so they need each other.

Aside from making a buddy cop duo out of the now-franchise, where it’s Good Cop and Dork Cop, "Minority Report" takes away the edge from the film’s vision of the future, putting them into hokey science fiction. This movie’s vision of the future is dull; glossy graphics are imposed onto regular landscapes a la "Divergent" failing to make a wholly futuristic Chicago. Similarly, this show’s grasp on time only makes way for eye-rolling time jokes. You can spot a framed vinyl of rapper J. Cole’s “2014 Forest Hills Drive” in the same scene where Lara’s grandmother says “When I was your age, we used to have something called Tinder.”

By the time it finally ends, "Minority Report" has done enough for the brand (nothing), and has declared its full potential by displaying its bizarre taste in what it finds to be menacing (those birds), or even nudging dialogue that it finds to be interesting (“You have no idea what’s coming, and you never will!,” said in a show about predicting the future). At the least, "Minority Report" is a bad TV adaptation that should save us from a future feature-length sequel. 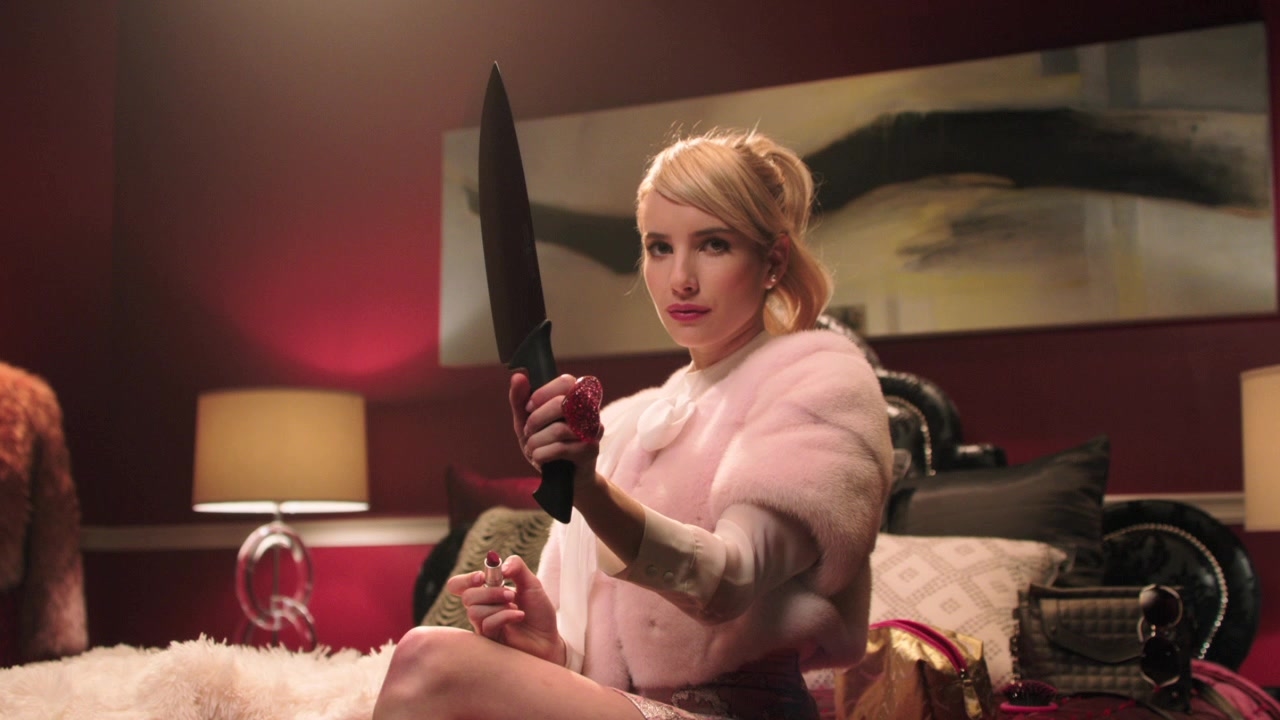 Unlike "Minority Report," Fox's other new series "Scream Queens" (premiering Tuesday, September 22 at 8/7c) proves its ability to think outside the box, and to arm a story with the basics that make viewers return week after week: character, atmosphere, and other storytelling hooks. Though its premiere is longer (two-hours, including commercials) than "Minority Report," this new series from Ryan Murphy makes better use of its first-impression opportunity, boasting a razor-sharp touch on the pulse of the social zeitgeist, and with a more refined campy tone than Murphy's previous cringe-circus "Glee."

The series begins in familiar mean sorority girls territory, in which the alpha of the pompous Kappa House (Emma Roberts' Chanel Oberlin) reigns over her sisters with shrill command; the house has become her kingdom, and she has made minions out of girls that have even taken her name (Billie Lourd plays Chanel #3, Abigail Breslin is Chanel #5. Don't ask about the fourth.) Her tyranny faces opposition from the newly-appointed dean Cathy Munsch (Jamie Lee Curtis), who seeks to destroy the corrosive sorority system, especially after a freaking tanning accident last year that left the previous Kappa president in a horrific state, and may have been Chanel's assassination attempt. A former Kappa turned-lawyer played by (a show-stealing) Nasim Pedrad prevents Dean Munsch from disbanding the sorority, but the rules have to be changed. For this year, the Kappas have to accept all who pledge--even the candle blogger, or the deaf girl who likes Taylor Swift.

One of the new pledges is Grace (Skyler Samuels), the other main character in "Scream Queens" aside from Roberts' grandly amusing villain, and a total opposite to her. Grace is almost laughably innocent; she still loves her dad, and is trying to join a sorority to be closer to her deceased mother (Chanel is doing it so she can one day be a newscaster like previous member Diane Sawyer). Grace becomes a part of the pilot's "House Bunny"-like, motley sorority shenanigans, where Chanel reluctantly also accepts the likes of Lea Michele's neck brace-wearing Hester into the group (recalling the same crutch Rumer Willis wore in that very Anna Faris college movie).

The pilot grows beyond the sorority story origins once murder starts to wreck havoc on campus, either accidentally or by a slasher, and as the open-ended answers begin to pile up through strong sequences along the way, the series confirms its creative promise. In only 90 minutes, "Scream Queens" is a whodunit, slasher movie, history mystery (regarding the sorority's past), all within the lightness of a college comedy. It's an impressive juggling act, especially in how it is able to make these various components resonate, through a charm that's all their own.

This very lively murder mystery package is punched up with a wonderfully energetic style as well, where zooms are used as exclamation points for confrontations, and aggressive low and high angles express its characters wrestling for power throughout the narrative. Warbling synths and sporadic '80s soundtrack bites keep "Scream Queens" in a hip retro groove as well. As for its visual playlist, one can spot little references to previous horror titles ("Carrie" and "Psycho" are winked at here), but this show's eye and mind is sharper than solely relying on its postmodern attitude.

There are many more threads and characters to share from the series, but they're best to meet through the show's brimming charisma. If it were just a movie, "Scream Queens" would be an unexpected, delicious treat for the Halloween season. Thankfully, it's a TV series.