“Marvel’s The Defenders” Does Bare Minimum For Netflix Fans

We all love it when a plan comes together, but sometimes we sacrifice spontaneity and artistic quality when we over-plan. Since the early days of the Netflix Marvel machine, it’s been promised that the heroes would join forces just as cinematic icons like Iron Man and Captain America formed a supergroup in “The Avengers.” And so we get what is essentially the TV version of that concept as the standalone series “Daredevil,” “Jessica Jones,” “Luke Cage” and “Iron Fist” unite to form “The Defenders,” premiering in its entirety this Friday, August 18th on Netflix. While it’s undeniably fun to see at least three of these charismatic characters come together, “The Defenders” suffers from the same bloat that has been plaguing Netflix series of late—everything feels like it’s moving much slower than it needs to in order to stretch out a thin plot to a season length. There’s something happening in the world of Netflix that’s turning into a disease across all television, as I’ve noticed other shows fall apart when it comes to pacing. Not everything can sustain an hour-long episode length or a 13-episode season (although it should be noted this one is just eight). And there’s a difference between deliberate plotting and the wheel-spinning we so often get from Netflix lately. “The Defenders” may end up being Exhibit A in this problem. The heroes don’t even get together until the end of episode three. And, honestly, you could start watching there and not miss too much. 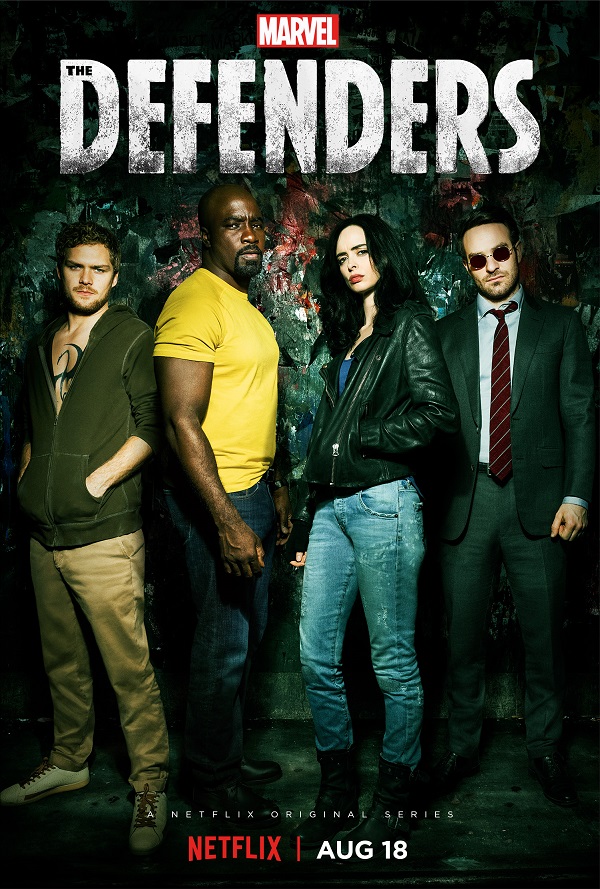 All four of the characters are essentially where we left them. Matt Murdock (Charlie Cox) is keeping his superhero identity of Daredevil under wraps for the most part, choosing to fight crime as an attorney more often than he does as a blind, ass-kicking vigilante. Jessica Jones (Krysten Ritter) is a reluctant private eye, but more easily recognized on the street by those hoping she can help them. Luke Cage (Mike Colter) is at Seagate Prison to start the season, but gets out relatively quickly, returning to Harlem to be its savior, hoping to continue his fight to protect the downtrodden and disenfranchised. Iron Fist (Finn Jones) is the most active of the quartet to start, picking up where he left off, in a battle against The Hand with his lover and partner-in-ass-kicking Colleen Wing (Jessica Henwick).

The first two episodes of “The Defenders” slowly move the four characters into each other’s narratives. For example, Jessica gets a case of a missing man that turns out to be much more than it first seems. Luke tries to protect a young man who may be getting wooed into the criminal underworld. Iron Fist continues to seek out The Hand. And all of this happens under the shadow of mysterious happenings in New York City, including a bizarre, unexplainable earthquake. We know that someone named Alexandra (played with steely determination by Sigourney Weaver) is this year’s “Big Bad,” but her identity is mysterious. She appears to be a power player in business and social stature in New York City, but it’s also revealed pretty quickly that she may have a supernatural side as well, and we learn that she’s directly involved with The Hand. Before long, she’s controlling the Black Sky, a resurrected Elektra (Elodie Yung), who has essentially become a memory-less killing machine. Why? What does Alexandra want? And can The Defenders work together to stop her?

“The Defenders” is loaded with familiar faces in an attempt to keep fans of the first four series as happy as possible just from the joy of being reunited with characters they’ve loved in the past. It’s not just the quartet. Foggy Nelson, Misty Knight, Claire Temple, Trish Walker, Malcolm Ducasse, Jeri Hogarth, and even Scott Glenn’s awesome Stick resurface, some of them in key roles. But what’s startling about all of this is that it still doesn’t feel like a real universe has been created. I realized watching “The Defenders” how little depth there is to all of this, and how much seeing these recurring characters didn’t feel like world-building as much as it did fan service. There’s a crucial difference. Part of the problem is that “The Defenders” lacks when it comes to visual language and production design, even when compared to shows like “Daredevil” and “Luke Cage,” which used Hell’s Kitchen and Harlem, respectively, as vibrant backgrounds. There’s a sense here of obligation instead of artistic intent.

“The Defenders” works best as a series of moments. Seeing Weaver and Glenn go at it as long-standing villain and hero has an undeniable energy simply because both performers are so good. There’s a fight scene at the end of episode three that’s so well-staged that it reminds you how half-asleep you’ve been for the previous three hours. However, it’s easy to believe there will be more like it in the back half of the season and fans will forget about the slow set-up. There are character beats that work too, particularly in the way Cage and Jones mock Iron Fist’s self-seriousness and inexperience. Colter and Ritter are undeniably charismatic. And Cox is good as the reticent Daredevil, the de facto leader of this group, if only because he’s the only Defender to have two seasons of background (and a lot of his supporting cast returns).

In the end, “The Defenders” ticks enough boxes that fans will likely overlook its flaws. In other words, it does pretty much what it needed to do to keep the Netflix Marvel Universe humming along to the next seasons of “Jessica Jones” and “Luke Cage.” It’s a bridge more than an artistic accomplishment in its own right. If that’s enough for you, that’s fine, but with all the build-up and all the hype for this superhero supergroup, no one would blame you for expecting a little more.