HBO’s “The Young Pope,” debuting this Sunday and airing Sundays and Mondays for the next couple months, is irreverent, morally complex, and often wildly entertaining. It is also clunky, slow and in love with the sound of its own voice. It is a program that contains striking imagery and conversation-worthy discussions about how religious leaders and celebrity culture intertwine (in a sense, the Pope is the biggest celeb in the world). But it frustratingly seems content to spin its wheels, often reflecting its origins as a film idea that was then transformed (or stretched, if you will) into a dramatic series. The good of the program often outweighs the bad, especially in Jude Law’s magnetic lead performance, but it’s a show that just misses television transcendence.

Creator/writer/director Paolo Sorrentino (“The Great Beauty,” “Youth”) loves the image of a smoking pope. It is one that humanizes an often inhuman image—the great religious leader with a visible fallibility in his addiction, but also a careless comfort that this guy is just like you and me. Jude Law also smokes in a really cool way. 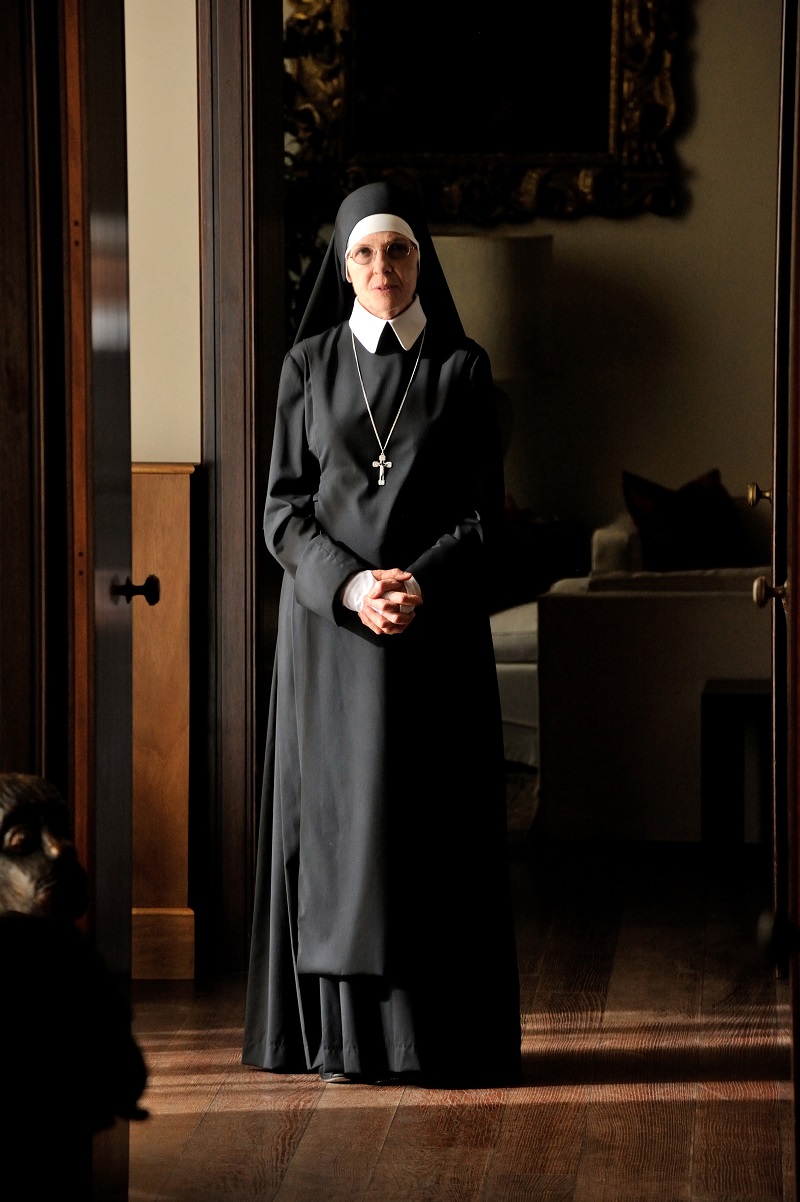 Law plays Lenny Belardo, who we meet already installed as Pope Pius XIII, the first American Pope in history. How on Earth this wise-cracking, barely-religious young man became pope is unclear at first, but it appears some in the conclave may have thought that he could be an easy puppet. There’s also an implication that a higher power stepped in and rigged the votes. Yes, God chose Lenny to become Pope. Lenny was raised in an orphanage run by Sister Mary (Diane Keaton), who he now brings to Vatican City to serve essentially as his Chief Advisor—some even start suggesting that she’s co-Pope. You could call her Vice Pope.

While the new Pope prepares his first homily, we meet the other power players in this drama, including Cardinal Angelo Voiello (Silvio Orlando), the increasingly aggravated Secretary of State in the Vatican; Cardinal Andrew Dussolier (Scott Shepherd), an old friend of Belardo’s from the orphanage; Sofia Dubois (Cécile de France), the Vatican’s wonderfully cynical director of marketing and communications; Monsignor Bernardo Alonso Guiterrez (a fantastic Javier Cámara from “Talk to Her”), who becomes one of Belardo’s allies; Ester Aubry (Ludivine Sagnier), a faithful young lady who becomes a key player in the behind-the-scenes manipulation of Belardo; and Cardinal Michael Spencer (James Cromwell), who thought he would be the next Pope but became Belardo’s mentor.

“The Young Pope” opens with an extended dream sequence—seven minutes without dialogue as Belardo imagines himself slowly moving to the microphone to deliver his first homily. He reaches the balcony, opens his arms wide (Sorrentino loves the overhead shot of Law with his arms outspread Christ-like even more than the smoking one) and the sun comes out. He is God’s rock star. He breaks into a speech about how to serve God we need to masturbate more often, use contraception, allow gay marriage, allow priests to love each other, decide when we’re going to die, and so on and so on. It is a scene designed to be a window into the title character’s true beliefs and produce a gasp in the faithful viewer.

The first few episodes are filled with such scenes of religious irreverence. Belardo claims he has nothing to confess, and has a smoke instead. When told he can’t in the Papal Palace, he literally says, “There’s a new pope now.” Law has a blast with the character. His delivery in a scene when he tells someone that God lives in The Big Dipper is fantastic, and he’s always had that playful gleam in his eye as if he knows more and is willing to do more than you to get what he needs.

However, the idea of a “Rock Star Pope” only takes a show so far, and “The Young Pope” struggles at times to develop into something greater. The concept that a doubtful, precedent-breaking Pope would be better for the Church than just another political pawn is a dramatically interesting one, but Sorrentino seems reticent to develop it, falling back on humor. He builds subplots—someone who claims he has seen the Virgin Mary, the way Ester is used as tool of seduction against the Pope—but to say they progress slowly would be an understatement. “The Young Pope” is a show of powerful moments and ideas—great scenes of conversation between two or three actors—but little cohesive vision or dramatic thrust to tie it all together and give it urgency.

Despite my qualms about its pacing and pretentiousness, “The Young Pope” certainly offers an alternative to most recent television in that it’s unafraid to take its time or deal with complex moral and religious issues. It’s a smart show; I just wish it didn’t feel the need to so often remind us how smart it is.