Clowns with murderous grins, toys that move on their own, the circus tent that hides something more terrifying than thrilling, Ryan Murphy’s “American Horror Story: Freak Show” sees the notoriously maniacal television creator playing again with Americana as a giant haunted house. Enter if you dare. It’s not for the faint of heart.

Reuniting with many of his key players from seasons past of “AHS,” while also bringing new members into the fold, Murphy is in full ringleader mode here, the Barnum & the Bailey of television insanity. He wants you squirming, laughing, chilling, tweeting and talking the next day. He makes television designed to provoke, and while I don’t think he’ll ever quite top the blend of Hollywood horror he captured in season one (I wasn’t as big a fan of “Asylum” or “Coven”), I like having him around to push buttons and get people talking. His missteps are often grand and insane, not the product of sheer laziness we often see in so much bad TV. I’d rather a writer swing and miss than not strike out with the bat on his shoulder. Murphy is always swinging for the fences. And the first two episodes give me more hope than usual that “Freak Show” will land in fair territory. 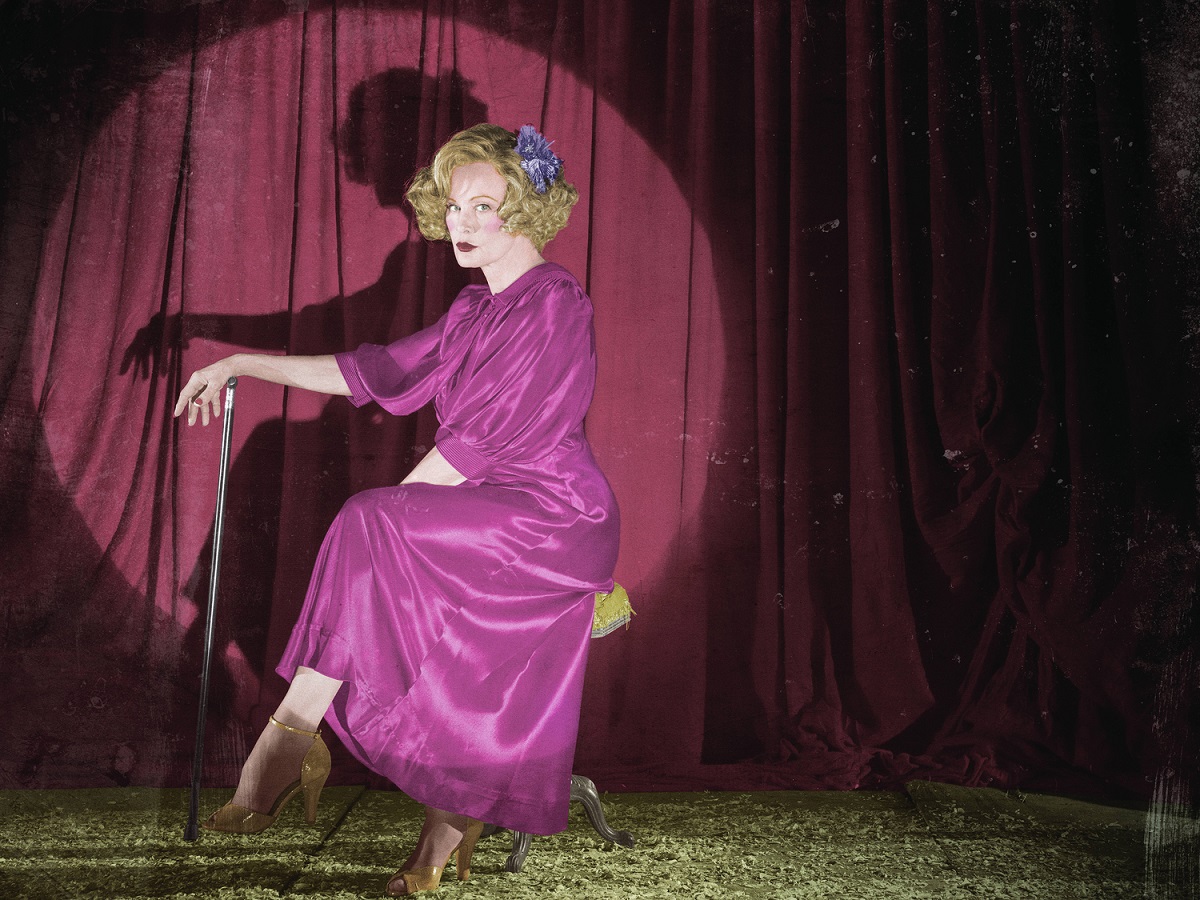 Where else could you see Jessica Lange doing a Marlene Dietrich impression singing David Bowie’s “Life on Mars”? Yes, this is Murphy in full freak mode. He’s “one of us,” inviting viewers into a late-night cable tent that’s unlike any other on television. Lange plays Elsa Mars, the owner of a traveling freak show in Jupiter, Florida in 1952. It is there that Elsa stumbles on her new main attraction, a two-headed woman named Bette & Dot Tattler (Sarah Paulson). Of course, each half of the Tattler twins has a distinct personality, allowing Paulson a lot of fun scenes in which she essentially plays two roles. One of my favorite things about the “AHS” phenomenon is that it’s granted Paulson time in the spotlight. She’s long been a great actress.

The Tattler twins join a show that includes a bearded lady (Kathy Bates), a lobster boy (Evan Peters), and, eventually, a strong man (Michael Chiklis) and 3-breasted woman (Angela Bassett), among other, real-life physically unique people. Meanwhile, a maniacal clown that looks ripped from the memories of anyone who saw “It” at too young an age is murdering people across Florida. The show, the clown, and even an entitled rich kid and his creepy mom (Frances Conroy) all collide under the big top. (And Denis O’Hare, Wes Bentley, Patti Labelle and Emma Roberts reportedly pop up after the first two episodes sent for press). 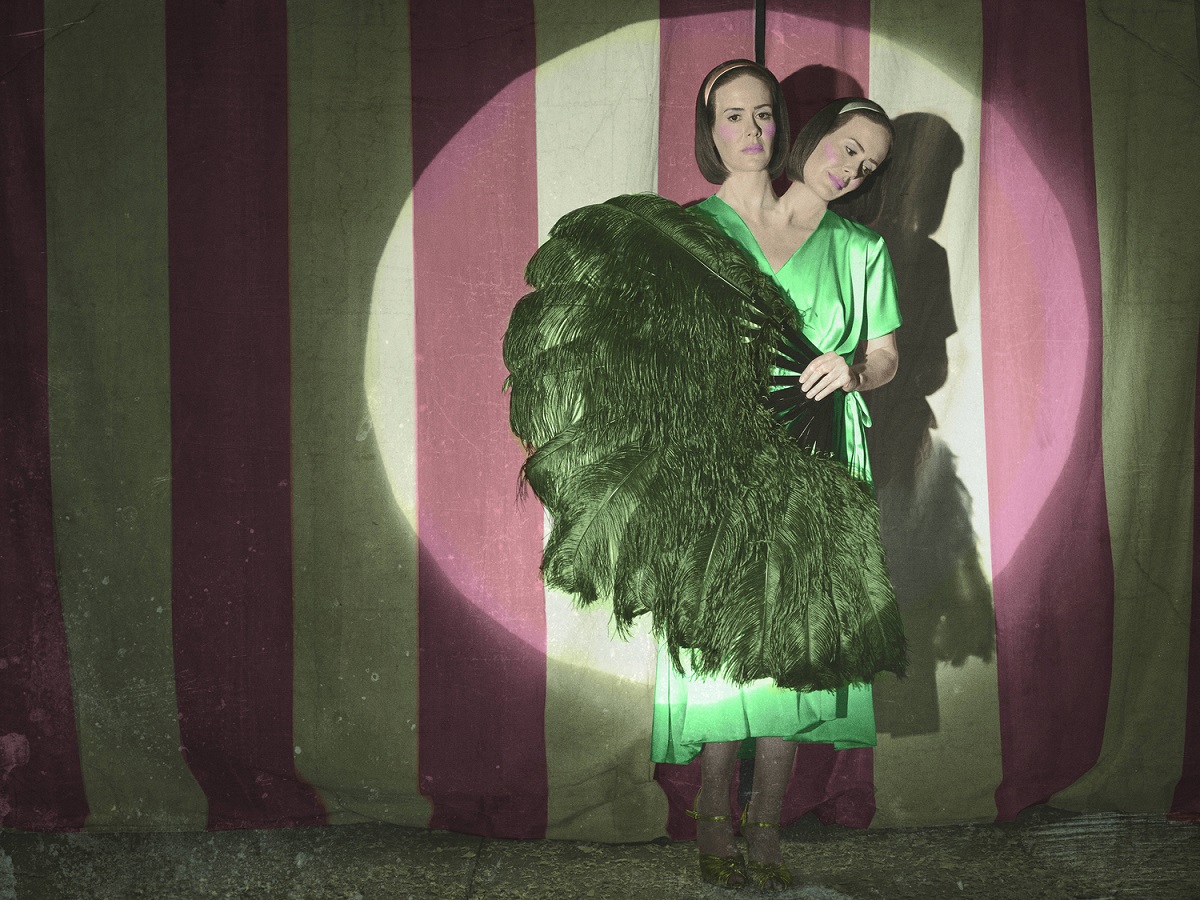 As with all in the universe of Ryan Murphy, everyone here has a secret, many of them murderous. Murphy has always been fascinated by the people on the fringe of society, whether they be the unpopular kids in “Glee” or the freaks of society in “Freak Show.” In fact, despite the killer clowns and sexual perversities, “Freak Show” shares another commonality with “Glee”—modern songs in a period context. There’s one full-song show-stopper in each of the two episodes to date. I won’t spoil the second song but it’s somewhat amazing to watch Sarah Paulson sing harmony with herself.

The overall oddity of that musical number is indicative of the joys in “Freak Show” overall. It’s designed to live up to its title, to be a rotating series of strange characters taking their individual turns in the spotlight. As such, the overall narrative is a bit lacking, just as you don’t go to a circus show in the hope of seeing all the various acts tied together through storytelling. Yes, there’s a murder to hide, a few secrets for each of the major characters, and Murphy’s overall arc of the outcast who holds more humanity than the “normal people,” but I hope the actual storytelling of “American Horror Story: Freak Show” improves in subsequent episodes. For two seasons now—in “Asylum” and “Coven”—the arc of the season-long story, with its tangents and diversions, has been Murphy’s biggest problem. And with so many bizarre characters to hold our interest, it’s easy to see this season wandering down subplot rabbit holes as well. Although I may not care as much this time around. When you have a 3-breasted Angela Bassett, ridiculously-accented Jessica Lange, and bearded Kathy Bates to keep your attention, how much plot do you really need?