Creative Passion of “The Get Down” Overwhelms Any Flaws

Baz Luhrmann’s “The Get Down,” debuting this Friday on Netflix, is one of the most in-your-face, larger-than-life television productions in history. Lest you think it might distill its auteur’s over-the-top tendencies to value spectacle over substance (and, don’t get me wrong, that’s often the right take—I like most of his films, for the record), “The Get Down” actually feels like pure Luhrmann. It has echoes of “Moulin Rouge!” and his takes on “The Great Gatsby” and “Romeo + Juliet.” It is unabashedly romantic, sentimental and crazy. At times, it is too much of a good thing, approaching total chaos in its non-stop flurry of activity. And yet it is one of the most consistently ambitious things that has ever aired on television, unafraid of the transformative power of love and art. For Luhrmann, these two elements are everything: the world spins because of who we love and how we express that love. And this worldview is captured beautifully in “The Get Down,” even if you might need a nap when you’re done watching.

The fascinating Justice Smith plays Ezekiel “Books” Figuero, an above-average kid in the Bronx in 1977. In the 90-minute pilot, Luhrmann and his co-creator Stephen Adly Guirgis surround Ezekiel with an enormous extended cast, capturing the vibrant personalities of New York City in the 1970s. As in “Moulin Rouge!” the poet here needs a muse, and Ezekiel is madly in love with his classmate Mylene Cruz (Herizen Guardiola), the girl with the perfect voice, stifled by a religious upbringing personified by her pastor father (Giancarlo Esposito). Mylene wants to break out; Ezekiel wants Mylene. In the premiere, he agrees to help her sneak into the hottest club in town—Les Inferno—so she can meet DJ Malibu and break into the disco scene. Much of “The Get Down” is interested in chronicling the popularity of disco (the premiere features two extended dance-off scenes) and how that fed into the emergence of hip-hop. 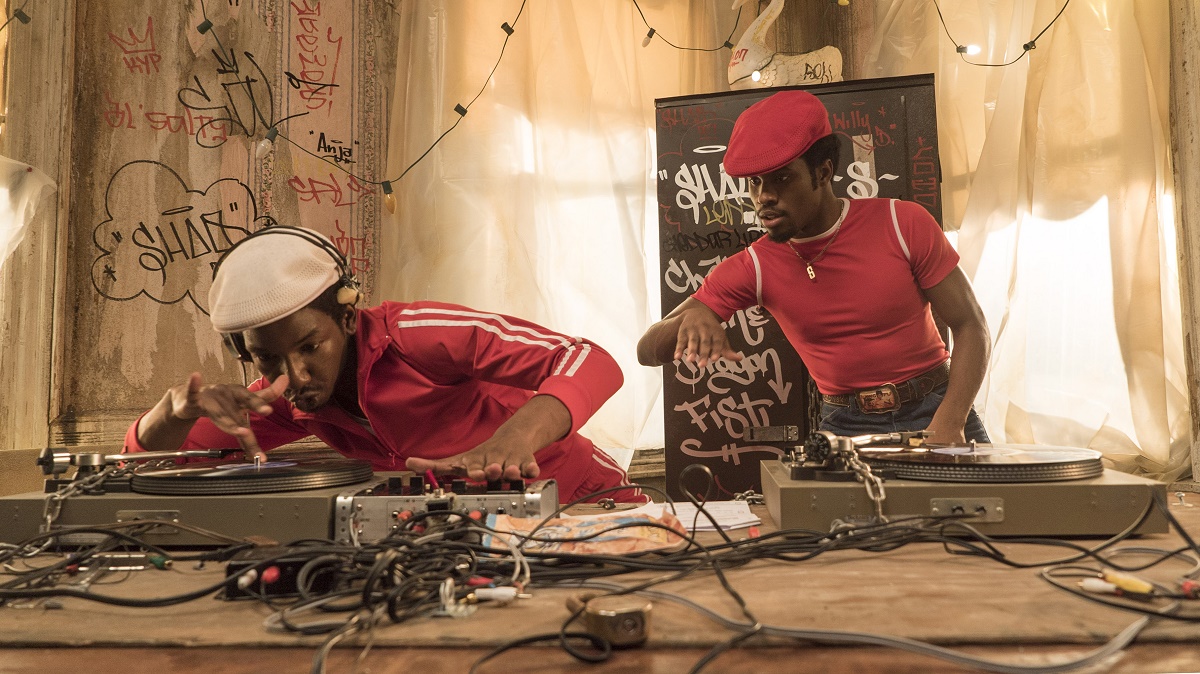 As Mylene fends off Zeke’s poetic declarations of love and fights for her own place in a crowded world, Zeke and his buddies (including Jaden Smith as a philosophical graffiti writer) share stories of a mysterious figure in the Bronx known as Shaolin Fantastic (Shameik Moore of “Dope”). He’s a mythical child of the streets. Kids tell stories of his kung fu abilities and his red sneakers bounding from burned-out building to building. As a local political leader named Papa Fuerte (Jimmy Smits) works to revitalize his neighborhood, Shaolin Fantastic becomes sort of its Robin Hood, a mythical leader for the young people, and the man who will introduce Zeke to the one and only Grandmaster Flash (Mamoudou Athie).

Of course, as one should expect from Luhrmann, “The Get Down” exists in a magical, romantic, Shakespearian world in which people regularly rhyme their dialogue like poets and artists do battle with gangsters. It is gloriously overwhelming at times, completely unafraid to be strange and beautiful. It can also be exhausting, frustrating and bordering on incoherent. "The Get Down" is so hyperactive that scenes cut before they feel like they’re done, almost like a record skipping—a problem that goes away in subsequent episodes not directed by Luhrmann. One almost gets the impression that Luhrmann wishes he had three hours for the premiere. But his unapologetic romanticism remains. There’s nothing else really like it on TV, and it completely fulfills my hope for Netflix expressed three years ago, when I wrote: “Give a creative voice absolute, total freedom. Go to people like Louis C.K., David Lynch, or, and this is essential, more people like Jenji Kohan, who are willing to write strong, female, minority characters, and say, 'You can have ten streaming hours. Do whatever you want.'”

Ultimately, “The Get Down” is about making a mark. Some kids spray paint trains. Some kids dance. Some kids sing. Some kids rap. Whatever it is, make your mark in an increasingly dangerous world. On that note, “The Get Down” falters most greatly in its lack of stakes. Archival footage is often used to remind us that the Bronx in 1977 was a pretty dangerous place and there are shoot-outs that result in a loss of life, but one never feels any actual sense of danger for our protagonists. The show would be stronger with a greater sense that these kids need to use their creative passion, and the new paths of DJ culture and rap, to not just creatively thrive but to survive. But the danger in Lurhmann’s world feels forced, a backdrop in which the creators of this show are only minorly interested, because their vision of music/dance/poetry is beyond the real world. It is not about what we learn of poetry in a classroom, but what inspired the poets for centuries to write in the first place.