“Dope” begins with an onscreen definition, which is a known characteristic of satires that ultimately fail in their satiric visions. Usually, these films open with a definition of satire, which they don’t live up to by the closing credits. “Dope” opts instead for Webster’s take on its title, defining it as slang for a stupid person, drugs and something that’s cool. To “Dope”’s credit, it presents us with credible examples of all three; to its detriment, “Dope” alternates between being shockingly tone-deaf and surprisingly on-point.

A narrator (producer Forrest Whitaker) introduces us to Malcolm (Shameik Moore) and his friends Jib (Tony Revolori from “The Grand Budapest Hotel”) and Diggy (Kiersey Clemons). The narrator tells us they’re into “White shit like getting good grades and going to college.” Straight-A student Malcolm dreams of Harvard, though his advisor doesn’t think he’s serious enough because Malcolm’s entry essay is a dissertation on Ice Cube’s “Today Was a Good Day.”

Malcolm and his crew also have a punk band where they sing catchy ditties penned by producer Pharrell Williams, though Malcolm feels a kinship with all things ‘90s, from its hip-hop artists to the hi-top fade that adorns his head until the last reel. The soundtrack is filled with a greatest hits collection of 90’s rap, proving itself far more knowledgeable than our hero. This is a kid who thinks Eric B. and Rakim’s 1986 masterpiece, “Paid In Full,” dropped in the '90s. Later, someone corrects Malcolm for trying to steal another 80’s classic for his lackluster decade.

But I digress. Everyone lives in Inglewood, California in a neighborhood called “The Bottoms”, and when writer-director Rick Famuyiwa focuses on the minutiae of Malcolm’s daily travails navigating his ‘hood, “Dope” is addictive. Famuyiwa has covered Inglewood before, in his superior 1999 feature, “The Wood,” and he provides a knowing jolt of familiarity for those of us who grew up in similar circumstances. I found a lot to identify with in Malcolm, who is the type of Black nerd rarely seen on the big screen. I was that nerd, too. I nodded knowingly as he described how every route from school to his house had its own unique dangers. I rocked his hairstyle, though when I did it, it was in fashion. I knew all about dope dealers, addicts and people who’d jack you for your sneakers (though I was too broke to buy any footwear they’d want to steal). And I felt a pain in my gut reminiscing how many times I was accused of “wannabe White” because I was into schoolwork and “keeping it real” hadn’t been coined yet.

The daily neighborhood adventures of Malcolm, Jib and Diggy would have been enough, but “Dope” introduces a drugs and violence plot that seems lifted from any number of the 90’s ‘hood movies Malcolm probably knows by heart. There’s a dollop of Hype Williams’ “Belly,” the Hudlins’ “House Party” and “Boyz N The Hood” among others. “Dope” alternates between satirizing these films, fetishizing them, paying homage to them, and ripping them off. For a film marketed as comedy, it also treads uneasily into violence. People are gorily shot, and there’s one jaw-dropping, unfunny shot of a blood-spattered GameBoy that’s played for laughs. The film feels off-kilter more often than not, though it isn’t without its inspired, successful moments.

“Dope” merges this drug plot with an “After Hours”-style escalating series of obstacles for Malcolm. It starts innocently enough, with the local drug dealer Dom (A$ap Rocky, very good here) telling Malcolm to pitch woo on his behalf to Nakia (Zoe Kravitz, doing a flawless imitation of her mother, Lisa Bonet). Nakia accepts Dom’s messenger’s request to go to a party, but the messenger’s interest in Nakia could get him shot in the process. Malcolm attends the party to make time with Nakia, but the party’s a front for a drug deal that, of course, goes awry. Malcolm winds up with a huge amount of Molly in his backpack as a result.

Jib and Diggy are along for the ride, and they’re more than capable sidekicks. They stick by Malcolm when his original plan to ditch the contraband goes South and also when Malcolm is coerced into selling the drugs by Dom’s mentor. En route, they meet a slew of people “Dope” amusingly mocks, from the type of brother who always winds up giving witness testimony on the news to the White hacker who whines about not being able to use the N-word. He can’t say it (Diggy slaps him after every attempt), but everyone else utters it about 200 times.

Dom’s mentor, A.J., who also turns out to be Malcolm’s college contact, is played by Spike Lee regular Roger Guenveur Smith. Smith is fantastic here, using his voice in such a way that it channels menace while remaining preternaturally smooth and calm. The combination feels like the Geto Boys rapping over “Brahm’s Lullaby,” and Smith milks every last syllable of his dialogue. His character went to Harvard, and has the potential pull to get Malcolm in as well. As great as Smith is, I’ve mixed feelings about his character (this is what a Harvard education gets you—a role as Mr. Big?), and those feelings extend to the movie at large.

On one hand, Malcolm’s “Super Fly”-inspired plan to force A.J. into pulling some strings at Harvard is no different than, say, a rich White kid whose father and grandfather went to Yale using their influence to get in despite not having the grades for it. And Malcolm’s computer-savvy, entrepreneurial means of selling those bags of Molly is refreshing simply because we rarely see such intelligence and foresight afforded people of color onscreen. On the other hand, I felt the film's message might equate to the idea that, for a poor, brown kid, the only sure road to Ivy League’s hallowed halls is paved with drug sales and blackmail. I am sure I’ll continue to wrestle with these ideas and my interpretations, which is quite frankly a good thing.

“Dope” played the same Sundance Festival that honored the repulsive “Me and Earl and the Dying Girl,” and while it is nowhere near as egregious in its depiction of African-Americans, “Dope” still left me feeling agitated about what I’d just seen. Some of that irritation had to do with the film’s decision to climb upon a soapbox in its last scenes. This lecture, delivered by Malcolm, reminded me of Paul Haggis’ “Crash”. It felt like a pander, a congratulatory back pat for audience members who needed to feel better about themselves. Malcolm, now shorn of his fade for a more “respectable” hairdo, asks in voiceover “Why do I want to go to Harvard? If I were White, would you even ask that question?” Since you brought it up, Malcolm, I should ask: "If you were White, would a movie have chosen the path to Harvard “Dope” chooses for you?" 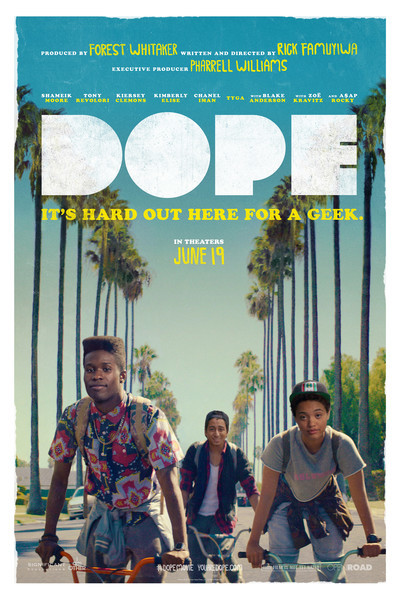 Blake Anderson as Will