The Blu-ray of the season, arguably the year, comes out today, and it’s a decent release for a beloved film. Yes, I said beloved. Before we open the can of worms as to whether or not J.J. Abrams’ most-anticipated-sequel-of-all-time disappointed or exceeded expectations, know that I’m here (mostly) to review the Blu-ray and not the film itself. There’s a difference. For a review of the film, go here and read Matt Zoller Seitz’s take on it, which I almost entirely agree with. For the record, in case you’re wondering, I think the movie works wonderfully, carried by great performances from the new cast and a beautiful understanding of the importance of practical effects and shooting on film. Yes, it’s deeply nostalgic, but it’s designed to get everyone in under the tent again, make references to all three films in the Holy Trilogy, and set the stage for Rian Johnson’s Episode VIII, which is going to rule.

I’m getting off track. Let’s not argue about the movie. Let’s talk about the Blu-ray. How are the special features? HD quality? Audio? Packaging? At first, the release looks impressive. The packaging, with a slip case and gorgeous art against a black case (instead of the typical blue) stands out, and the list of bonus features is also impressive. The release also follows the trend of multiple forms in one package with a Blu-ray, DVD and digital copy included.

However, when one digs a little deeper, the special features come up slightly short. There’s no commentary track, which would have been nice, and the bonus features are remarkably repetitive. I’ll get to them one at a time. As for the movie, what do you expect? I remember when I first started reviewing Blu-rays there was notable variation in HD quality from release to release, but most major studios are on the same plane nowadays when it comes to their new theatrical titles. In other words, “The Force Awakens” looks damn good. The audio mix, in 7.1 DTS-HDMA is pretty spectacular too. Turn it up loud. Get a new TV. John Williams' score booms, the sound effects are well-mixed, and the colors are rich and detailed. It looks and sounds like a "Star Wars" movie should: great.

The special features, one at a time:

The bulk of the bonus material—in fact, all you really need to watch outside of the deleted scenes—is this nearly feature-length documentary about the making of the film. It really touches on all of the other individual mini-featurettes also included on the disc. Unlike a lot of these things, all of the players were interviewed, including Mark Hamill, Harrison Ford, Daisy Ridley, Adam Driver, and J.J. Abrams. You won’t do that thing that often happens with making-of material when you say something like, “They couldn’t get Bruce Willis on the making-of 'Die Hard'?” In fact, you’ll hear informative, interesting interviews from all of the players. Yes, it’s a little fluffy and soundbite-y but it’s also very well-rounded, and at its best when offering experiential reports, especially from the young actors talking about what it was like to get the role, step into the costumes, do the physical work, etc. You get a sense of how much of this production was practical—people in creature costumes, actual background actors instead of CGI, a lack of stunt people, etc. And you’ll get to see a lot of neat how-they-did-that visuals, like the guy in a green jumpsuit who pushes BB-8 along like a child’s lawnmower toy. It’s also just filled with casually-dispensed trivia like the fact that there were female Stormtroopers in this movie and that Captain Phasma is named after Don Coscarelli’s “Phantasm,” because her outfit resembles the metallic flying ball from that horror classic. I kinda love that. It’s also interesting to see a major moment like the Kylo-Han climax without special effects and realize that Driver isn’t even holding a lightsaber, much less acting on an actual set. It’s two men in a green room. Making movie history. 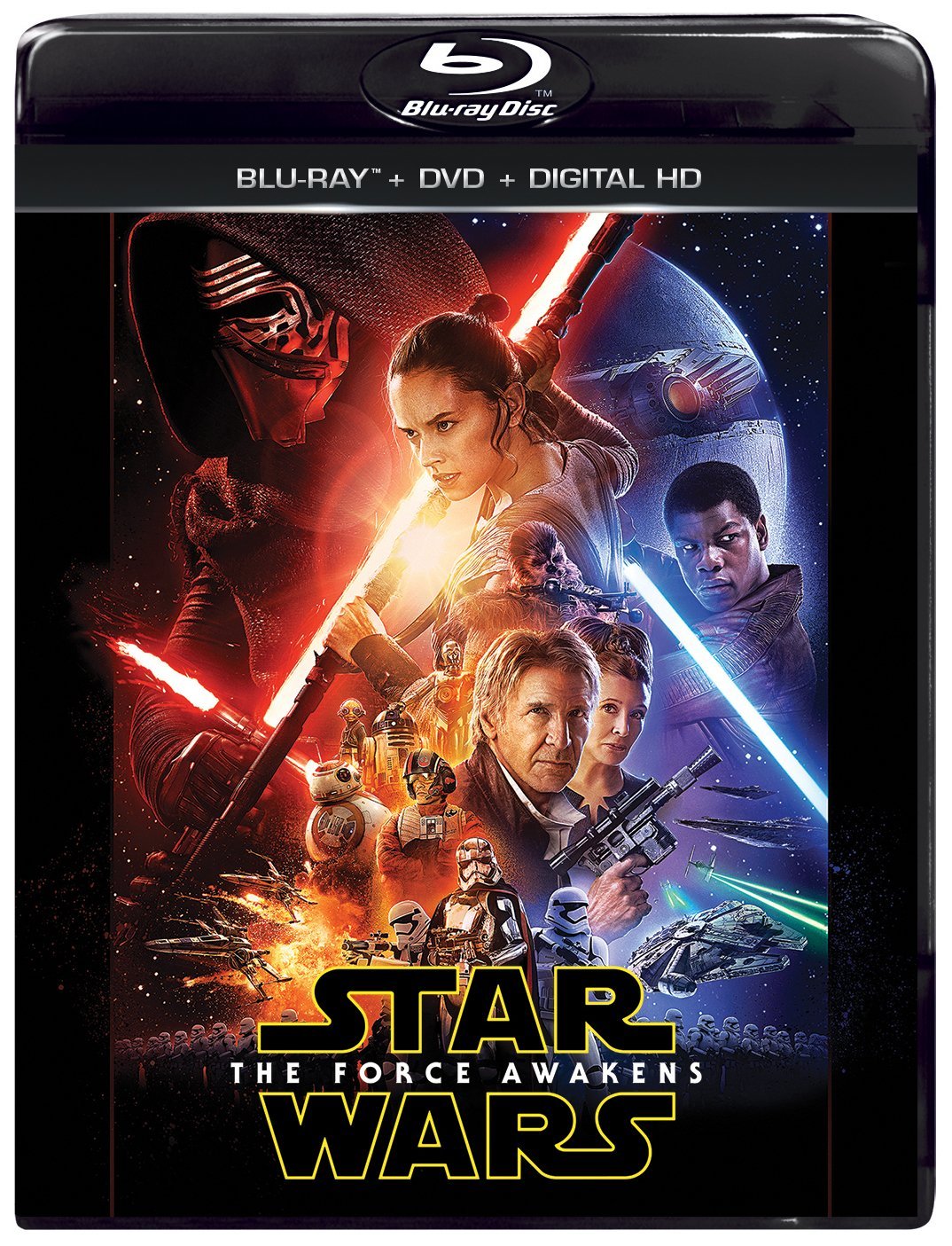 From here, the special features get less interesting as they merely expand upon some elements from the mini-doc. The first table read for “The Force Awakens” was historic, not only producing a highly-dissected photo that stoked the buzz but really giving the cast a sense of what they were doing. You’ll learn that Mark Hamill actually read the script aloud (scene descriptions, blocking, other non-dialogue)—a job that usually goes to the director—and one gets a sense of how magical that must have been.

We’ve become so accustomed to CGI creations that you may not even realize how many background characters in “The Force Awakens” were practically created. 105 of them, to be exact.

These are pretty self-explanatory, and again, mostly, expansions on things already tapped on in the lengthier feature. The John Williams interview is my favorite, mostly because he’s a GOD, and because he expands on how he incorporated themes from the original trilogy into new compositions, and the timing of how he used them. It’s great stuff, and could have been longer.

“Finn and the Villager”

An expansion of the opening of the film, in which Finn has his traumatic trip to Jakku. He’s already gotten the blood on his face mask, and he encounters a villager that he’s supposed to shoot. They look in each other’s eyes and he lets her go. It’s a good moment but it’s not really needed. Abrams and Boyega sell the trauma that pushed Finn to the light side of the Force well enough without it.

This is the smartest cut of all, as it would have been an earlier reveal for General Leia and C-3P0 as she gets a message about the opening scene—that the Jakku village was wiped out and that BB-8 is missing. It’s not a good scene on a number of levels.

This is pretty self-explanatory. Poe, BB-8 and the rest of the crew (although the previous scene and this one would have meant more Greg Grunberg) get ready to go to lightspeed. It's a beat that wasn’t needed.

Kylo comes aboard the Millennium Falcon, looks menacing, goes into the cockpit and realizes that Han Solo has landed. There’s a great shot that pans low behind Kylo before he turns and says his father’s name. I think this is the deleted scene that one could most argue should have been kept. It would have added even more weight to the climax. Driver plays it almost as if he knows what he’s going to do in that final moment in this scene.

“Finn Will Be Fine”

A final moment of worry for Rey. Back at the base, she hears, “Your friend’s gonna be just fine,” and looks relieved. It might have deepened their dynamic for “Episode VIII” but the actors did enough of that, so it’s an OK cut.