Bachelorette: Invasion of the b-face girls

"Bachelorette" opens in theaters September 7, and is available on demand via iTunes, Amazon.com, Vudu.com and Google Play.

In this reality-TV ruled world, the word bachelorette seems firmly attached to the legacy of Trista Rehn and the female spin-off of a competitive dating game. Yet in writer/director Leslye Headland's dark comedy, "Bachelorette," the subject isn't the tricks and lines men use in the warfare of love but how three women deal with being on the downside of not-married when the least conventionally attractive of their high school clique is preparing to walk down the aisle. This cocaine-fueled cattiness never rises above callow, although the acting talent is deeper than the script. 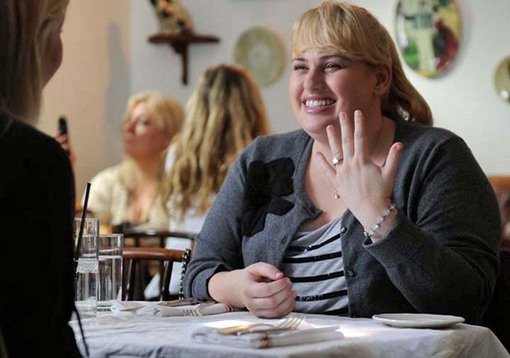 Never does a woman get her singlehood smacked into her face more than when one of her friends from high school gets married. You might be thinking that this movie is a rip-off of the raunchy 2011 "Bridesmaids" but back up a little and think "universal theme" because Headland's "Bachelorette" was originally a play that was reviewed in July of 2010 by the New York Times. 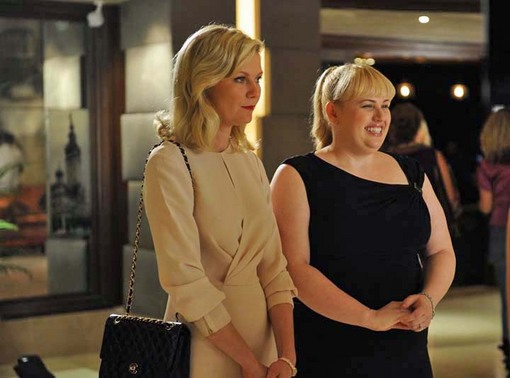 The movie starts serenely enough with a beautiful blonde woman, Regan (Kirsten Dunst), talking about her work. "Things have been going really well. I've been working with sick kids," she tells the unseen friend. "Kids who've been diagnosed with cancer." Her news seems impressive enough, but her lunch companion Becky (Rebel Wilson) one-ups her: Becky got engaged. 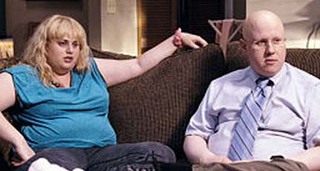 At this point, you may flashback to "Bridesmaids," in which Rebel Wilson played Brynn, the freeloading sister of Annie's (Kristen Wiig) roommate Gil (Matt Lucas). Brynn is the one who got that free tattoo of a Mexican tequila worm on her back and has been entertaining herself by reading Annie's diary.

Yet while in the "Bridesmaids" the thick chick was the up-front, down-and-dirty sister of the groom (Melissa McCarthy as Megan), big-boned bride Becky stays mostly in the background. And we think we know why these three pretty, thin girls kept her around in high school: she made them feel prettier and superior. Until now. 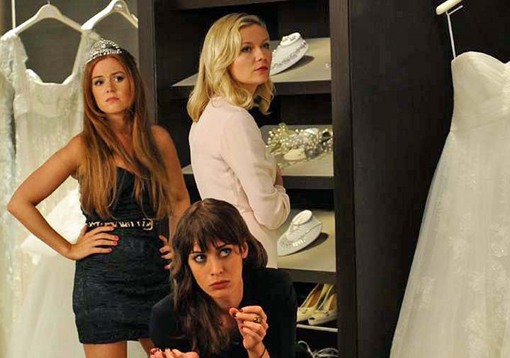 Becky's announcement leads to a cell phone conversation among the vicious triangle: the Los Angeles-based, lost-a-day-due-to-drugs Gena (Lizzy Caplan), upscale Manhattan clothing boutique ditzy sales girl Katie (Isla Fisher) and maid-of-honor Regan. The type-A control freak Regan had been certain she was going to win the race to the altar between their high school foursome, the "biatch-faces." That's how they pronounce it when they aren't using "b-faces."

While we're talking about the b-word, let's be clear. This isn't the kind of b that is just too manly for men or the in-charge alpha b. These menacing mean girls (Class of 1999) banded together in high school after meeting in the bathroom (where Gena ate her lunch and Becky offered hers up to the porcelain god). They handled high school by appointing themselves queen bees of the cut-down, posing as snide fashionistas, mastering scalpel-sharp facial commentaries, and slutting their way to popularity.

Six months after Becky's announcement, the b-faces are again together in New York (according to IMDB, the Carleton Hotel was one of the film locations). Gena busts out the bucks for airfare and wears a dress barely south of her derriere so she can see the ex-boyfriend who "ruined her life." A lot of embarrassing moments are recalled at the rehearsal dinner and if you don't want to hear about urination or hurling, this might not be the comedy for you. Dr. Pepper gets a prominent mention, but I don't know if it really counts as premium product placement. 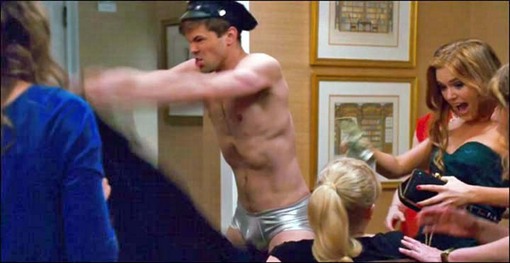 After the meal and repugnant revelations, the wedding party divides by gender for the appropriate parties. The men will go to a strip club. The women gather at Becky's suite for ice cream, alcohol and a stripper. After Becky gets insulted by the freelance male stripper Katie's hired (Grammy Award-winning, Tony-nominated Andrew Rannells from "Book of Mormon" and TV's "The New Normal"), she tells her three high school besties, "Don't bother coming tomorrow unless you're going to act like normal people." Becky, her mother and the other bridesmaids retire, but not the b-faces. 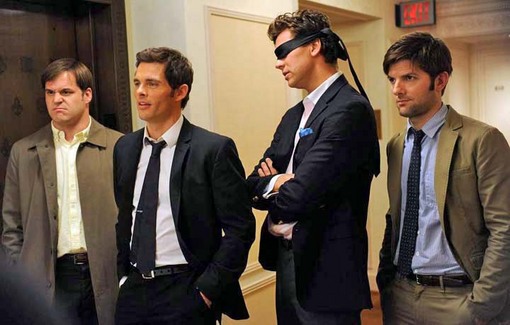 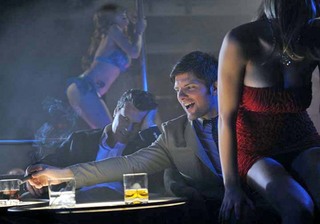 Becky's pronouncement only temporarily dampens the viciousness of these three b-bachelorettes. Regan snarls, "I did everything right. I went to college. I exercise. I eat like a normal person. I have a boyfriend going to med school." Becky's fiancé Dale (Hayes MacArthur) is good-looking, decent and has a good job. The drunk and drugged out threesome handle their romantic malaise by thinking vindictively in social media mode: Regan and Katie get into Becky's wedding gown together while Gena tries to take a photo so they can post it on Facebook and tag Becky. Of course, everyone knows you don't mess with the wedding dress the night before the wedding. Fixing the dress before the wedding becomes the main cause of action with side trips into the sexual adventures of the toxic three. 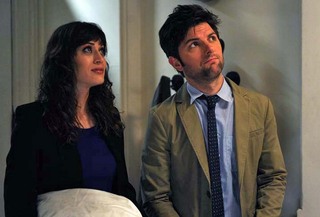 There's a lot that's cringe-worthy here -- from Regan dissing the wedding coordinator by calling her "Chinatown," to the celebration of party-hearty cocaine-snorting. Yet this isn't a male-bashing b-fest. Some of the male characters come off surprising well. The groom seems like a good guy with his morals in place. His friend Joe (Kyle Bornheimer) shows a gentlemanly streak despite his high school crush for Katie. Although there's some resolution for Gena and her ex, Clyde (Adam Scott), and a revelation that's supposed to be touching, how hopeful can the future be with a coke addict? 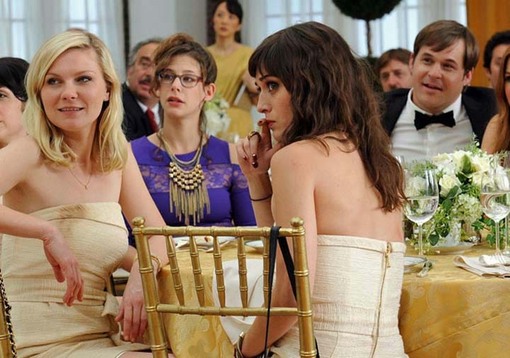 Despite the similar set-ups, "Bridesmaids" and "Bachelorette" couldn't be more different. "Bridesmaids" involves thirtysomethings, while "Bachelorette" is in the twentysomething range. "Bridesmaids" received a nationwide, multiplex release while "Bachelorette" premiered at Sundance and on VOD. Both movies spew torrents of four-lettered words, including the b-faces' motto, but while "Bridesmaids" starts with sad sex scenes (from a woman's perspective), "Bachelorette" features an extended monologue on blowjobs that works as a verbal slap in the face for one sad-sack stranger. Guys might consider it unkindly as a cock tease, but I'm sure more than a few women will be amused. There is no mention of diarrhea in "Bachelorette," but when a comment on vomit arises early in the film, you aren't surprised when that's one of the things that comes up later in the movie.

However, in "Bridesmaids," the bride and the bride's future sister-in-law were all sympathetic characters. Annie's friendship with the bride was touching. With "Bachelorette," Headland has placed three despicable characters at the center of a movie. That's a brave but not necessarily a wise decision. 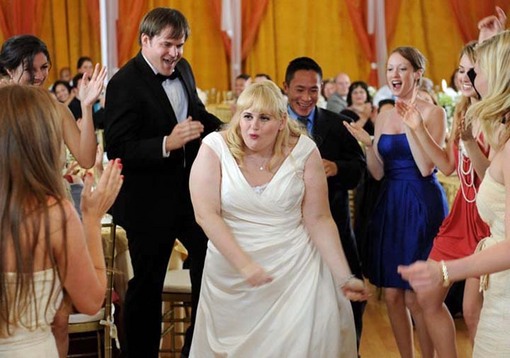 Of course, from my world of DIY weddings, where friends took photos, arranged flowers and made the munchies, these were the kind of girls we avoided. We'd probably still avoid them at high school reunions. I sewed my own wedding dresses and couldn't imagine spending a gazillion dollars on a ceremony, so neither one of these bridal b-fests speak to the kind of world I inhabit. Yet there was something much sweeter in "Bridesmaids" where you ended up genuinely liking some of the main characters and can appreciate the female-bonding. In "Bachelorette," the most likeable people -- Becky, Dale the groom and Joe -- are peripheral characters. 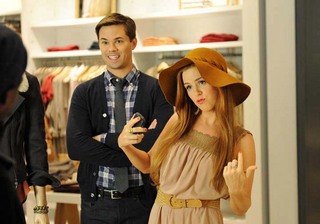 For Dunst, this is a step down from her role that earned her a 2011 Best Actress at Cannes in "Melancholia" and a step sideways from her sweetheart role opposite Tobey Maguire in the Spider-Man trilogy. Fisher, who played the maniacal love interest in "Wedding Crashers," has little to work with here, but we'll see her next year in the much-anticipated Baz Luhrman adaptation of "The Great Gatsby." Caplan previously played the victim of "Mean Girls" and more recently played the sister of Aron Ralston (James Franco), the man who amputated his own arm to free himself while trapped by a boulder in an isolated canyon in the Oscar-nominated 2010 movie "127 Hours." One hopes that Rannells will find more rewarding movie roles (but won't desert the stage). This film isn't likely to garner Oscar nominations, but perhaps the fun here for the three actresses is just the opportunity to play nasty. 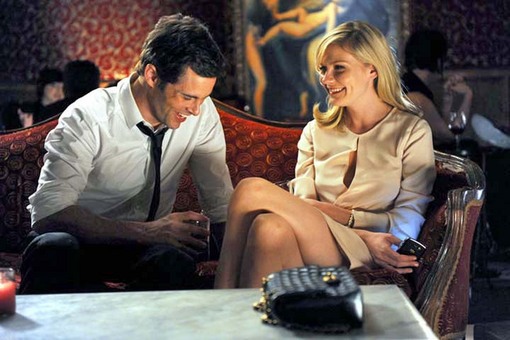 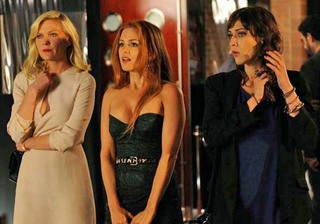 From the brief snippets I've seen of the reality TV shows like "The Bachelor," "The Bachelorette" and "Survivor," I realize there's an audience for good-looking people being cruel to each other and women behaving cattily. Certainly, there's been an audience for the stage production and its dark humor. Headland's movie adaptation of her play has something for women but also things that might appeal to men, such as the thought of getting a chance with that high school hottie who didn't know you were alive no matter how much you groveled, or seeing the most despicable guy, Trevor (James Marsden), banging the biggest b-face at a strip bar. The "Bachelorette" is an urban fairytale for the cocaine party crowd and the high school b-faces who need hope if their lives have hit a low plateau. Maybe you'll enjoy knowing you have your act together better than these mean girls.

On the official website, you can take a quiz to determine which toxic bachelorette you are.